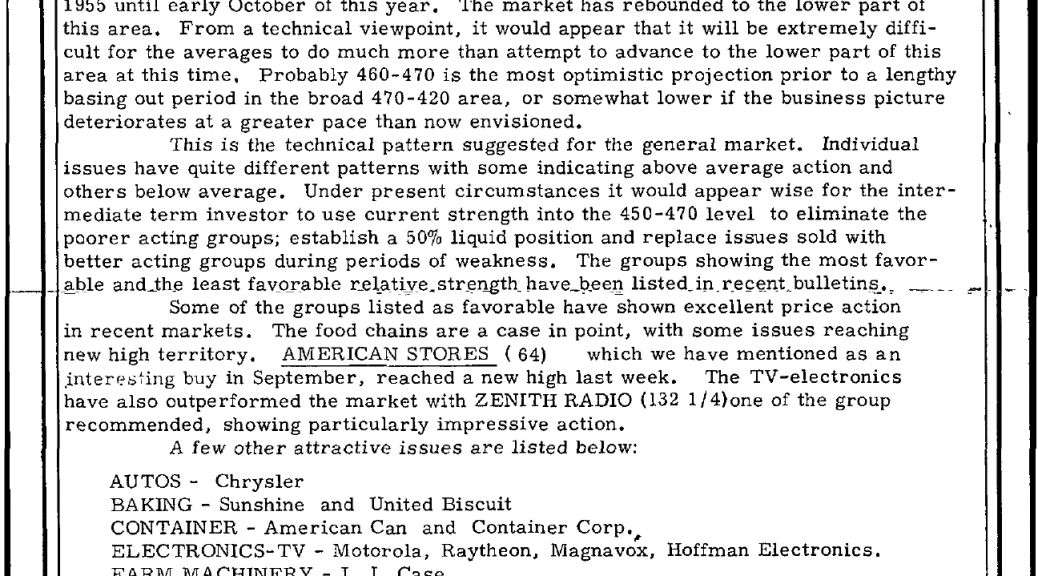 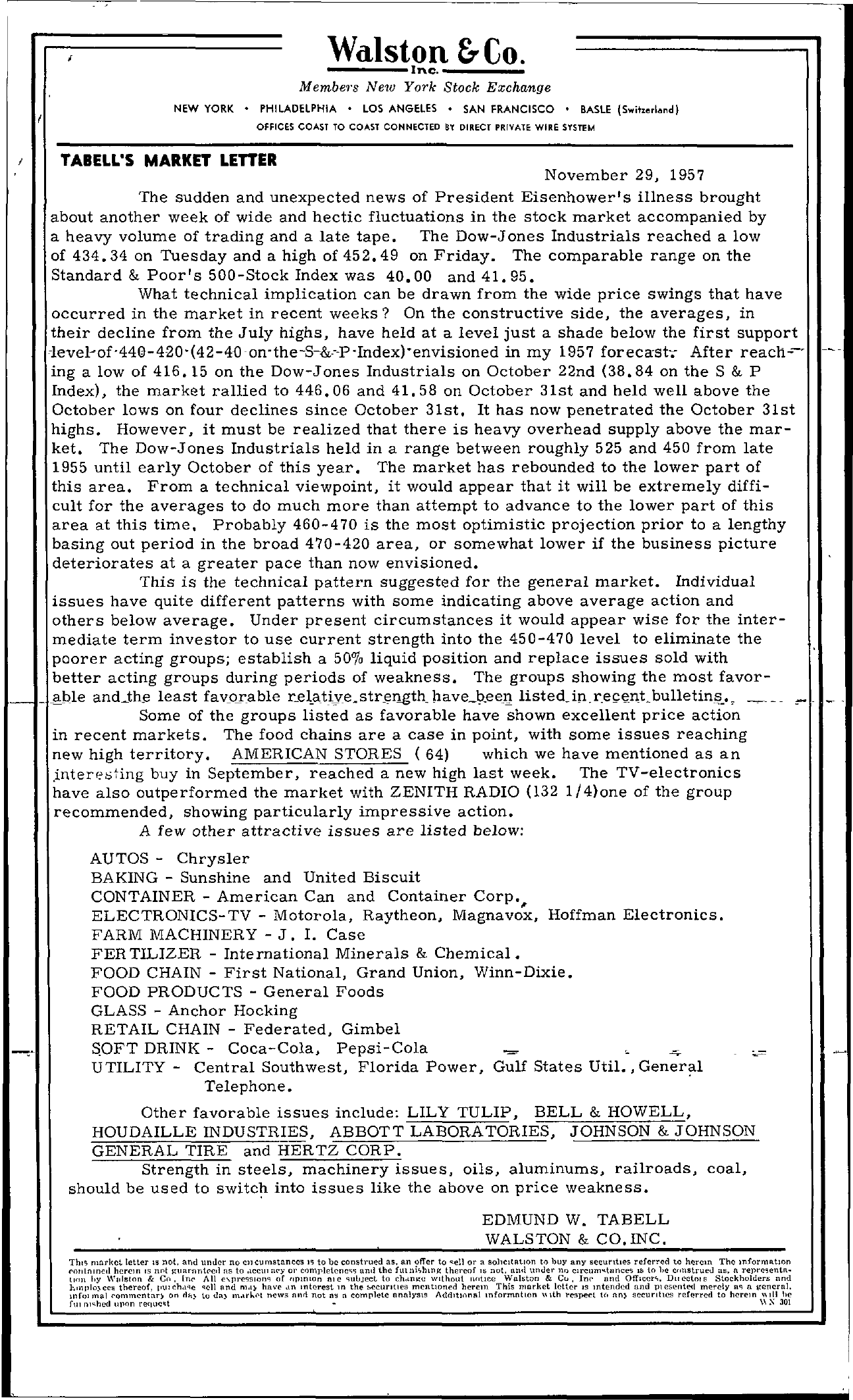 Wdlston &Co.I —–Inc. Membe,'s New York Stock Exchange NEW YORK ' PHILADELPHIA ' LOS ANGELES ' SAN FRANCISCO ' BASLE (Sw;hed.,d) OFFICES COAST TO COAST CONNECTED 8'1' DIRECT PRIVATE WIRE SYSTEM I TABELL'S MARKET LEnER November 29, 1957 The sudden and unexpected news of President Eisenhower's illness brought about another week of wide and hectic fluctuations in the stock market accompanied by a heavy volume of trading and a late tape. The Dow-Jones Industrials reached a low of 434.34 on Tuesday and a high of 452.49 on Friday. The comparable range on the Standard & Poor's 500-Stock Index was 40.00 and 41. 95. 'What technical implication can be drawn from the wide price swings that have occurred in the market in recent weeks On the constructive side, the averages, in their decline from the July highs, have held at a level just a shade below the first support -level-of-44-420(42-4)onthe-S-&–PIndex)'envisioned in my 1957 After reach– ing a low of 416. 15 on the Dow-Jones Industrials on October 22nd (38.84 on the S & P Index), the market rallied to 446,06 and 41. 58 on October 31st and held well above the October lows on four declines since October 31st. It has now penetrated the October 31st highs. However, it must be realized that there is heavy overhead supply above the market. The Dow-Jones Industrials held in a range between roughly 525 and 450 from late 1955 until early October of this year. The market has rebounded to the lower part of this area. From a technical viewpoint, it would appear that it will be extremely diffi- cult for the averages to do much more than attempt to advance to the lower part of this area at this time, Probably 460-470 is the most optimistic projection prior to a lengthy basing out period in the broad 470-420 area, or somewhat lower if the business picture deteriorates at a greater pace than now envisioned. This is the technical pattern suggested for the general market. Individual issues have quite different patterns with some indicating above average action and others below average. Under present circumstances it would appear wise for the inter- mediate term investor to use current strength into the 450-470 level to eliminate the poorer acting groups; establish a 50 liquid position and replace issues sold with better acting groups during periods of weakness. The groups showing the most favor- !!lle least favosable rel,.atiye.strength havel;eel! listedip.r.ecent.bulletini . . Some of the groups listed as favorable have shown excellent price action in recent markets. The food chains are a case in point, with some issues reaching new high territory. AMERICAN STORES (64) which we have mentioned as an .interfsting buy in September, reached a new high last week. The TV-electronics have also outperformed the market with ZENITH RADIO (132 1/4)one of the group recommended, showing particularly impressive action. A few other attractive issues are listed below AUTOS – Chrysler BAKING – Sunshine and United Biscuit CONTAINER – American ELECTRONICS-TV – Mo tCoraonlaa, nRdayCthoenotani,neMr aCgnoarpvox, Hoffman Electronics. FARM MACHINERY – J. 1. Case FER TILIZER – International Minerals & Chemical. FOOD CHAIN – First National, Grand Union, Winn-Dixie. FOOD PRODUCTS – General Foods GLASS – Anchor Hocking RETAIL CHAIN – Federated, Gimbel SOFT DRINK – Coca-Cola, Pepsi-Cola UTILITY – Central Southwest, Florida Power, Gulf States Util. , General Telephone. Other favorable issues include LILY TULIP, BELL & HOWELL, HOUDAILLE INDUSTRIES, ABBOTT LABORATORIES, JOHNSON & JOHNSON GENERAL TIRE and HERTZ CORP. Strength in steels, machinery issues, oils, aluminums, railroads, coal, should be used to switch into issues like the above on price weakness. EDMUND W. TABELL WALSTON & CO. INC. Tht; market letter IS not. and unuer no ell cumstanccs 15 to be construed as. an offer to ;ell or a sohcltallon to huy any secunhes referred to herem The lniOrmlltlf)ll (,OIILIlInCII hcr('lfi IS n ….t as to ,\CC\ll UC'y 01' an,l the thereof 15 not, nntl l1nder no ClrCllm..tHnce; IS to he Cllstrueu as, fI repre;entn. tl(!1 hy Wldston & Co, in(' All ellre'lSlcHI of PI1\IOn me ulJject to ehdnl!';c WIthout lItlee Wulston & Cu, In(' nnd DlIectms Stockholders nnd thereof, nnd m.l) ha\'e ,m In the ,ecuntlcs mentIOned herem This market letter 15 lntended and lllesented merely 11'1 n general. Infolmal '01\11\1entar) on 11ft to nl.lrl-'t news allcl not flS fI complete analysIs AddltlonallnformntlOn '\Ith l'espeel tft securIties referred to herein …. 111 he fill upon r e 1 I u e ; l . \\ X 301