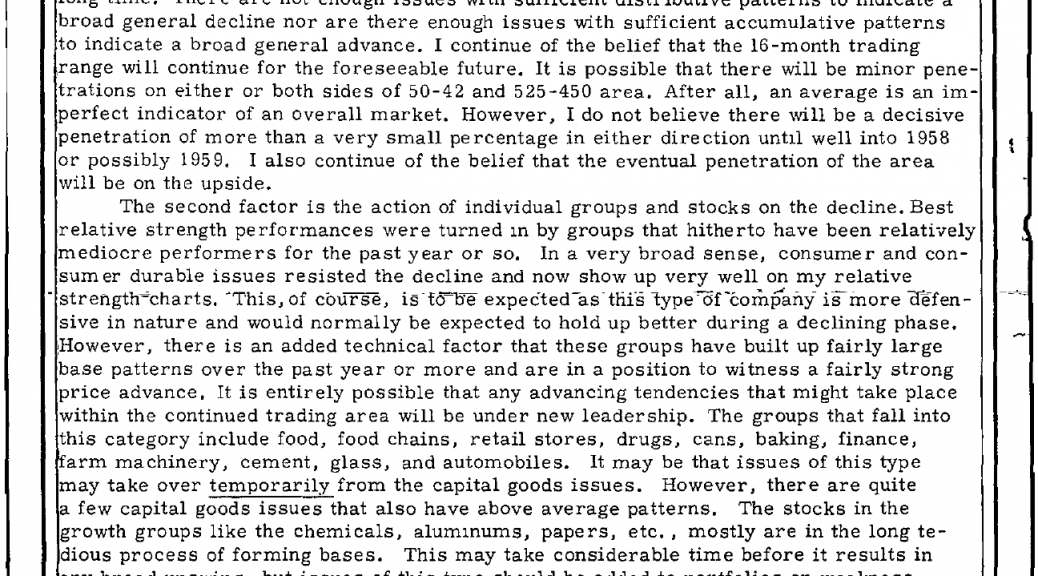 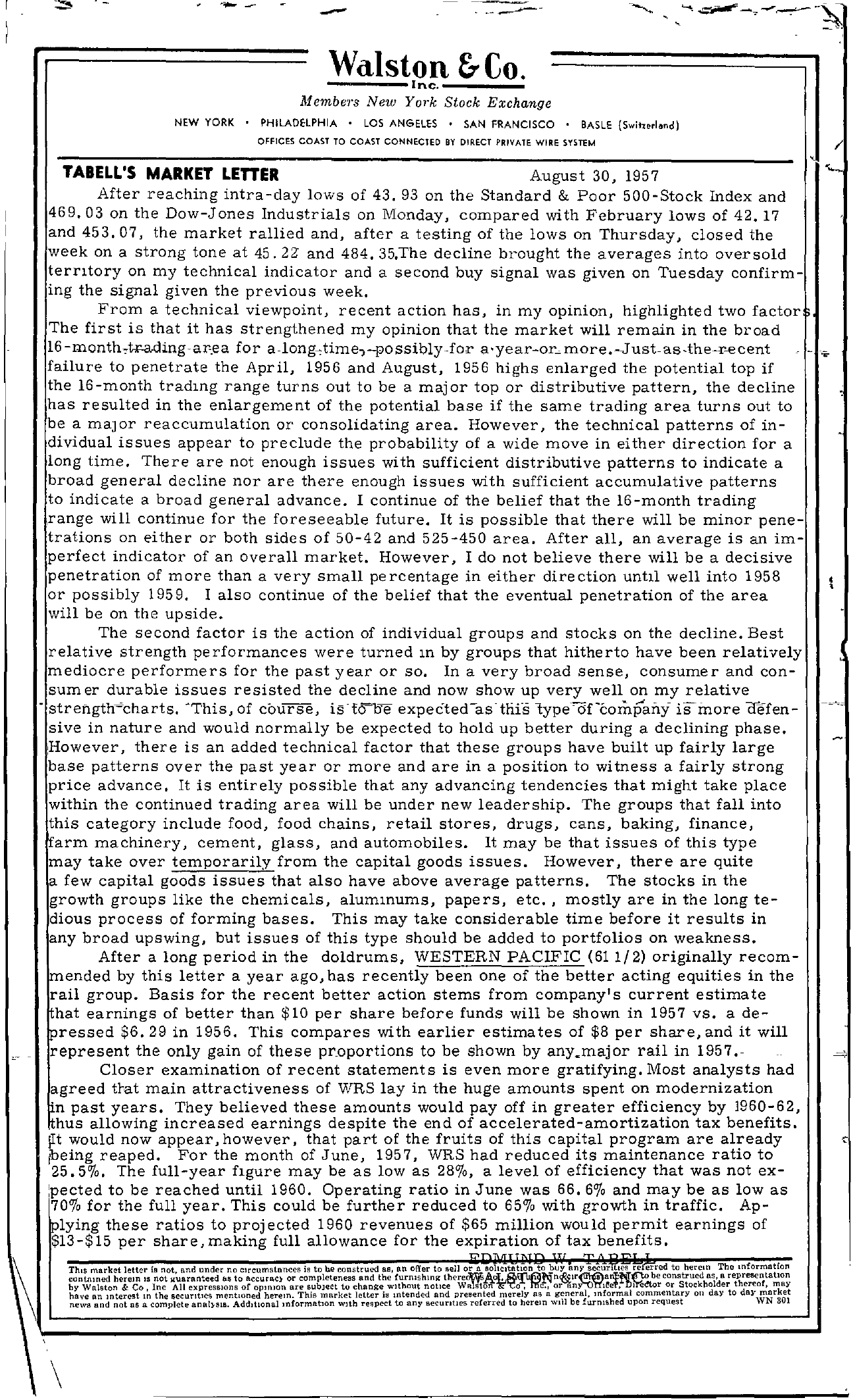 – -… … – —. ..—– .. .' Wdlston &- CO.———Inc.– Members New York Stock Exchange NEW YORK PHILADELPHIA LOS ANGELES SAN FRANCISCO BASLE (Swa,IBnd) OFFICES COAST TO COAST CONNECTED BY DIRECT PRIVATE WIR.E SYSTEM TABELL'S MARKET LEnER August 30, 1957 After reaching intra-day lows of 43. 93 on the Standard & Poor 500-Stock Index and 469.03 on the Dow-Jones Industrials on Monday, compared with February lows of 42. 17 and 453.07, the market rallied and, after a testing of the lows on Thursday, closed the week on a strong tone at 45. 2Z and 484. 35.The decline brought the averages into oversold terntory on my technical indicator and a second buy signal was given on Tuesday confirm- ing the signal given the previous week. From a technical viewpoint, recent action has, in my opinion, highlighted two factor The first is that it has strengthened my opinion that the market will remain in the broad 16 -al.ea for a-long-otime.,-po ssiblycfor a -year-oL more .-Just- as cthe-r-e cent failure to penetrate the April, 1956 and August, 1956 highs enlarged the potential top if the l6-month tradmg range turns out to be a major top or distributive pattern, the decline has resulted in the enlargement of the potential base if the same trading area turns out to be a maJor reaccumulation or consolidating area. However, the technical patterns of in- dividual issues appear to preclude the probability of a wide move in either direction for a long time. There are not enough issues with sufficient distributive patterns to indicate a broad general decline nor are there enough issues with sufficient accumulative patterns to indicate a broad general advance. I continue of the belief that the l6-month trading range will continue for the foreseeable future. It is possible that there will be minor pene- trations on either or both sides of 50-42 and 525-450 area. After all, an average is an im- perfect indicator of an ove raIl market. However, I do not believe there will be a decisive penetration of more than a very small percentage in either direction untll well into 1958 or possibly 1959. I also continue of the belief that the eventual penetration of the area will be on the upside. The second factor is the action of individual groups and stocks on the decline. Best ,relative strength performances were turned 111 by groups that hitherto have been relati-vely mediocre performers for the past year or so. In a very broad sense, consumer and con- sum er durable issues resisted the decline and now show up very well on my relative . strength'charts. -This, of course, isf6je expected-as this 1ypeoCcompany is-more aefen- 'sive in nature and would normally be expected to hold up better during a declining phase. However, there is an added technical factor that these groups have built up fairly large 'base patterns over the past year or more and are in a position to witness a fairly strong price advance. It is entirely possible that any advancing tendencies that might take place within the continued trading area will be under new leadership. The groups that fall into this category include food, food chains, retail stores, drugs, cans, baking, finance, arm machinery, cement, glass, and automobiles. It may be that issues of this type may take over temporarily from the capital goods issues. However, there are quite a few capital goods issues that also have above average patterns. The stocks in the growth groups like the chemicals, alum1l1ums, papers, etc., mostly are in the long te- dious process of forming bases. This may take considerable time before it results in any broad upswing, but issues of this type should be added to portfolios on weakness. After a long period in the doldrums, WESTERN PACIFIC (611/2) originally recom- by this letter a year ago, has recently been one of the better acting equities in the rail group. Basis for the recent better action stems from company's current estimate earnings of better than 10 per share before funds will be shown in 1957 vs. a de- 6.29 in 1956. This compares with earlier estimates of 8 per share, and it will represent the only gain of these pr.oportions to be shown by any.major rail in 1957.- Closer examination of recent statements is even more gratifying. Most analysts had agreed tJ-at main attractiveness of WRS lay in the huge amounts spent on modernization n past years. They believed these amounts would payoff in greater efficiency by 1960-62, n;hus allowing increased earnings despite the end of accelerated-amortization tax benefits . . would now appear, however, that part of the fruits of this capital program are already Ibeing reaped. For the month of June, 1957, WRS had reduced its maintenance ratio to 25.50/0. The full-year flgure may be as low as 280/0, a level of efficiency that was not ex- pected to be reached until 1960. Operating ratio in June was 66.60/0 and may be as low as 700/0 for the full year. This could be further reduced to 650/0 with growth in traffic. Ap- these ratios to proj ected 1960 revenues of 65 million would permit earnings of 13-15 per share, making full allowance for the expiration of ta i\lJl'QT;WQ 1)/, xTPbe!inEebfiikts. . ThIS market letter is not, and under no cIrcumstances is to he construed as, nn offer to sell or n sohcltation to buy any sccurVtes re erred to herem The mformatlOn contmned herem IS not Kuaranteed &s to aCCUfIlC) or completeness and the furnlshlnK by Walston & Co, Inc All expressIOns of opinion arc subject to change wIthout notIce Walston hi'e or'1iny-Ci'rfll!et.I.I'Jlrl!l!btoer construed ns, a representatIon or Stockholder thereof, may have an Interest In the securitIes mentIOned herem. This market Jetter is mtended and presented merely as 11 general, Informal commentary on day to day market \ \-n..'.B.n.d.nU.t..B.oo.m.p..t'.Bn.B….' ,.u.,n.''.h'.d.UP.u.n..qu..t.W.N30.' I t \ \\