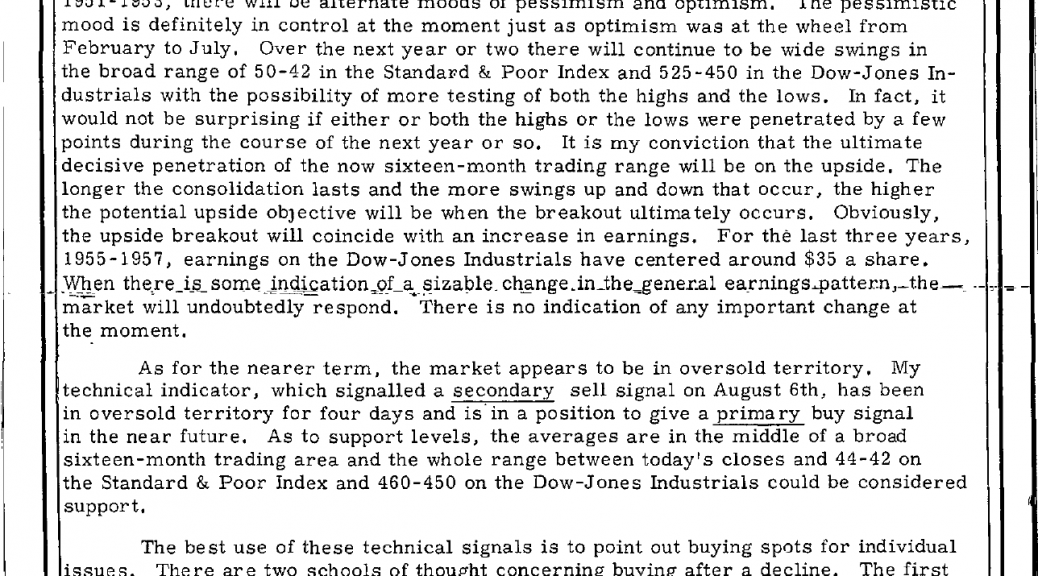 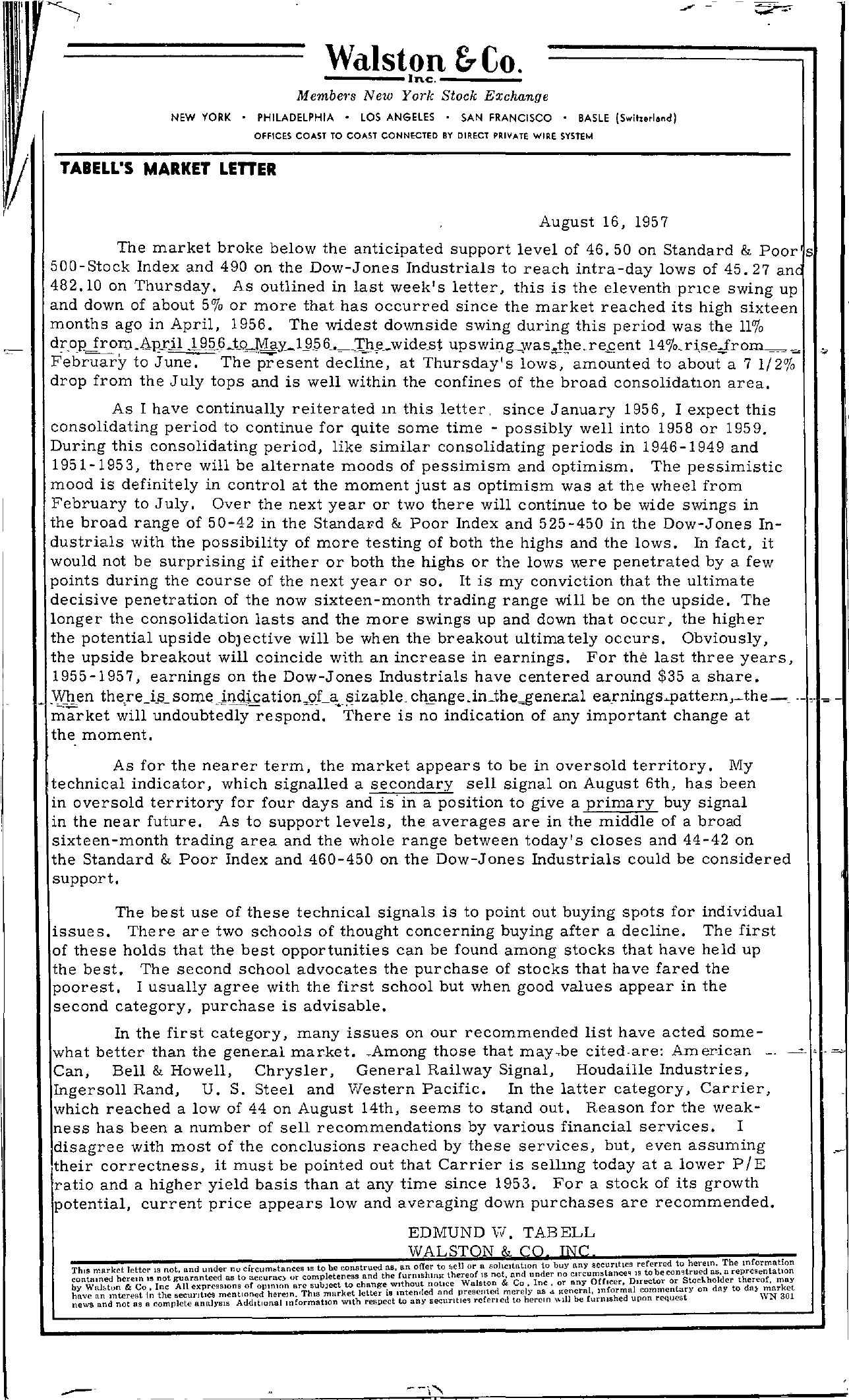 ,I Walston &- Co. – – – – – I n c , – Membm's New York Stock EXchange NEW YORK PHILADELPHIA LOS ANGELES SAN FRANCISCO BASLE (Swl.,land) OFfiCES COAST TO COAST CONNECTED BY DIRECT PRIVATE WIRE SYSTEM TAB Ell'S MARKET LEnER August 16, 1957 The market broke below the anticipated support level of 46.50 on Standard & Poor s 500-Stock Index and 490 on the Dow-Jones Industrials to reach intra-day lows of 45.27 anc 482.10 on Thursday. As outlined in last week's letter, this is the eleventh prIce swing up and down of about 5 or more that has occurred since the market reached its high sixteen months ago in April, 1956. The widest downside swing during this period was the 11 droR froID.ABril February to June. The present decline, at Thursday's lows, amounted to about a 7 1/2 drop from the July tops and is well within the confines of the broad consolidatlOn area. As I have continually reiterated m this letter, since January 1956, I expect this I, consolidating period to continue for quite some time – possibly well into 1958 or 1959. During this consolidating period, like similar consolidating periods in 1946-1949 and 1951-1953, there will be alternate moods of pessimism and optimism. The pessimistic mood is definitely in control at the moment just as optimism was at the wheel from February to July. Over the next year or two there will continue to be wide swings in the broad range of 50-42 in the Standard & Poor Index and 525-450 in the Dow-Jones In- dustrials with the possibility of more testing of both the highs and the lows. In fact, it would not be surprising if either or both the highs or the lows ere penetrated by a few points during the course of the next year or so. It is my conviction that the ultimate decisive penetration of the now sixteen-month trading range will be on the upside. The longer the consolidation lasts and the more swings up and down that occur, the higher the potential upside obJective will be when the breakout ultimately occurs. Obviously, the upside breakout will coincide wi.th an increase in earnings. For the last three years, 1955 -1957, earnings on the Dow-Jones Industrials have centered around 35 a share. theFei.s.. — ,- – market will undoubtedly respond. There is no indication of any important change at the moment. As for the nearer term, the market appears to be in oversold territory. My technical indicator, which signalled a secondary sell signal on August 6th, has been in oversold territory for four days and is'in a position to give a primary buy signal in the near future. As to support levels, the averages are in the middle of a broad sixteen-month trading area and the whole range between today's closes and 44-42 on the Standard & Poor Index and 460-450 on the Dow-Jones Industrials could be considered support. The best use of these technical signals is to point out buying spots for individual issues. There are two schools of thought concerning buying after a decline. The first of these holds that the best opportunities can be found among stocks that have held up the best. The second school advocates the purchase of stocks that have fared the poorest. I usually agree with the first school but when good values appear in the second category, purchase is advisable. In the first category, many issues on our recommended list have acted somewhat better than the general mar-keto Among those that may,be cited-are American -Can, Bell & Howell, Chrysler, General Railway Signal, Houdaille Industries, Ingersoll Rand, U. S. Steel and Western Pacific. In the latter category, Carrier, which reached a low of 44 on August 14th, seems to stand out. Reason for the weakness has been a number of sell recommendations by various financial services. I disagree with most of the conclusions reached by these services, but, even assuming their correctness, it must be pointed out that Carrier is sellmg today at a lower PiE ratio and a higher yield basis than at any time since 1953. For a stock of its growth potential, current price appears low and averaging down purchases are recommended. EDMUND TABELL WALSTON & CO. INC . —