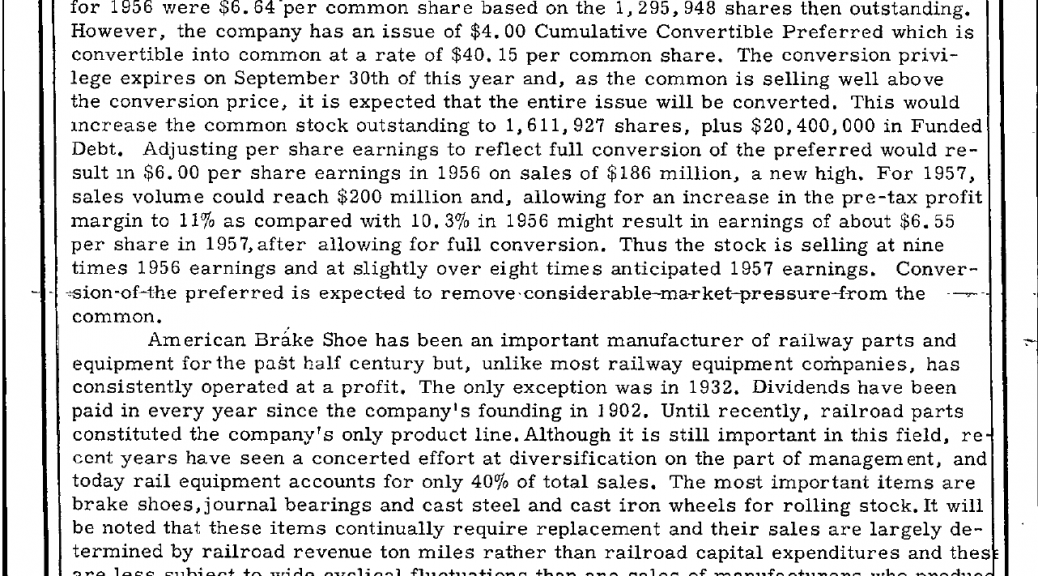 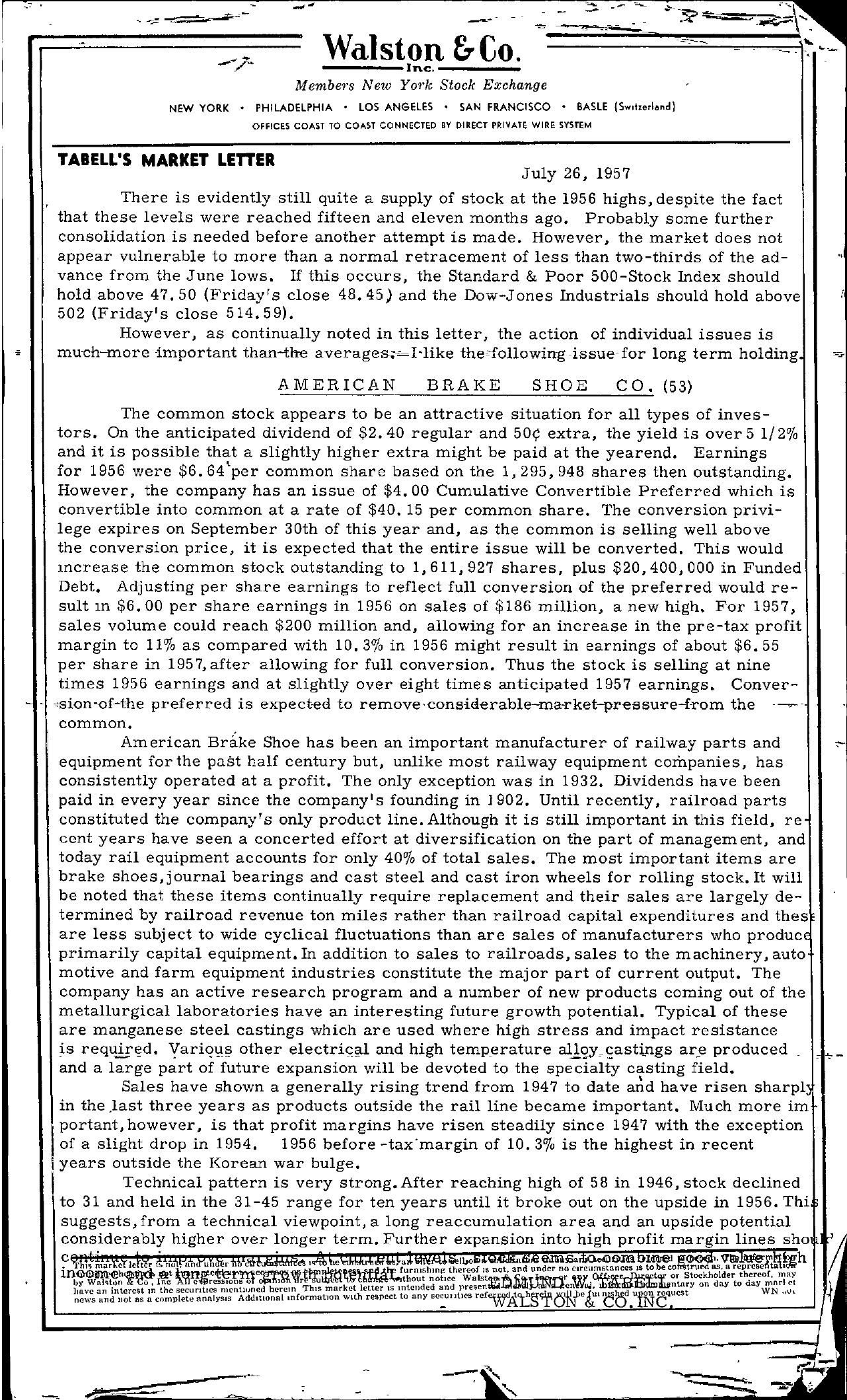 Walston &- Co. Inc,—- Membe1'S New YQ'k Stock Exchange NEW YORK PHILADELPHIA LOS ANGELES SAN FRANCISCO BA5LE (5w,t…ld OFFICES COAST TO COAST CONNECTED BY DIRECT PRIVATE. WIRE SYSTEM TABELL'S MARKET LEnER July 26, 1957 There is evidently still quite a supply of stock at the 1956 highs, despite the fact that these levels were reached fifteen and eleven months ago. Probably some further consolidation is needed before another attempt is made. However, the market does not appear vulnerable to more than a normal retracement of less than two-thirds of the ad- vance from the June lows. If this occurs, the Standard & Poor 500-Stock Index should hold above 47.50 (Friday's close 48.45) and the Dow-J ones Industrials should hold above 502 (Friday's close 514.59). However, as continually noted in this letter, the action of individual issues is mu-ch-moreimportant than-the long term holding AMERICAN BRAKE SHOE CO. (53) The common stock appears to be an attractive situation for all types of inves- tors. On the anticipated dividend of 2.40 regular and extra, the yield is over 5 1/2 and it is possible that a slightly higher extra might be paid at the yearend. Earnings for 1956 were 6.64 'per common share based on the 1,295,948 shares then outstanding. However, the company has an issue of 4.00 Cumulative Convertible Preferred which is convertible into common at a rate of 40. 15 per common share. The conversion privi- lege expires on September 30th of this year and, as the common is selling well above the conversion price, it is expected that the entire issue will be converted. This would mcrease the common stock outstanding to 1,611, 927 shares, plus 20,400,000 in Funded Debt. Adjusting per share earnings to reflect full conversion of the preferred would re- sult m 6.00 per share earnings in 1956 on sales of 186 million, a new high. For 1957, sales volume could reach 200 million and, allowing for an increase in the pre-tax profit margin to 11 as compared with 10.3 in 1956 might result in earnings of about 6.55 per share in 1957, after allowing for full conversion. Thus the stock is selling at nine times 1956 earnings and at slightly over eight times anticipated 1957 earnings. Conver- preferred is expected to remove-cons-iderable-ma-rket-pressure-f-rom the common. American Brake Shoe has been an important manufacturer of railway parts and equipment for the past half century but, unlike most railway equipment companies, has consistently operated at a profit. The only exception was in 1932. Dividends have been paid in every year since the company's founding in 1902. Until recently, railroad parts constituted the company's only product line. Although it is still important in this field, cent years have seen a concerted effort at diversification on the part of managem ent, and today rail equipment accounts for only 40 of total sales. The most important items are brake shoes,journal bearings and cast steel and cast iron wheels for rolling stock. It will be noted that these items continually require replacement and their sales are largely de- termined by railroad revenue ton miles rather than railroad capital expenditures and the are less subject to wide cyclical fluctuations than are sales of manufacturers who prU'UUICtl primarily capital equipment. In addition to sales to railroads, sales to the machinery, auto motive and farm equipment industries constitute the major part of current output. The company has an active research program and a number of new products coming out of the metallurgical laboratories have an interesting future growth potential. Typical of these are manganese steel castings which are used where high stress and impact resistance is requirEEd. other and high temperature ar,e produced and a large part of future expansion will be devoted to the specialty ca,sting field. Sales have shown a generally rising trend from 1947 to date and have risen in the .last three years as products outside the rail line became important. Much more im portant,however, is that profit margins have risen steadily since 1947 with the exception of a slight drop in 1954. 1956 before -tax'margin of 10.3 is the highest in recent years outside the Korean war bulge. Technical pattern is very strong. After reaching high of 58 in 1946, stock declined to 31 and held in the 31-45 range for ten years until it broke out on the upside in 1956. Thi suggests, from a technical viewpoint, a long reaccumulation area and an upside potential considerably higher over longer term. Further expansion into lines .,.. –