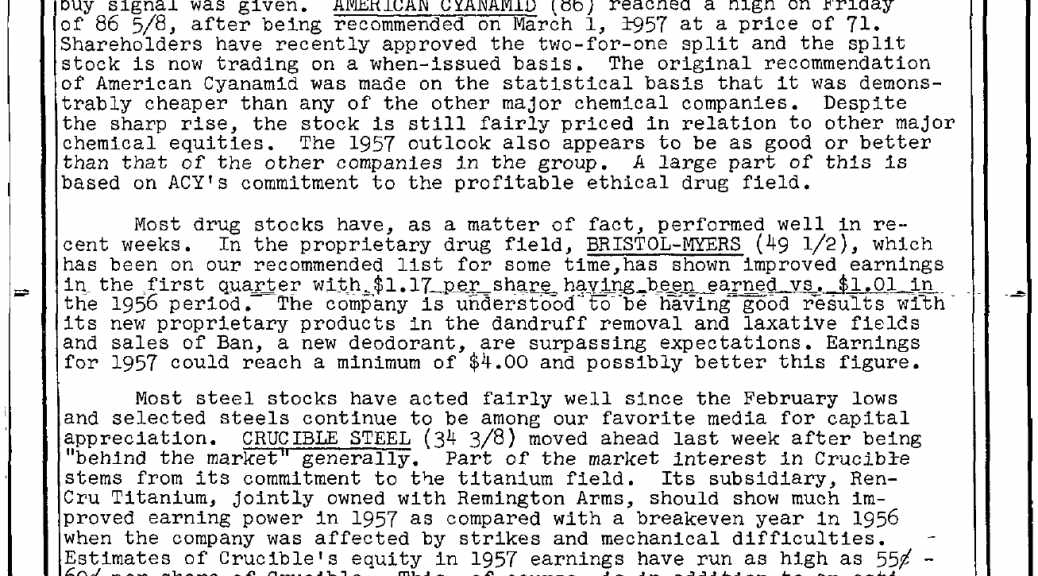 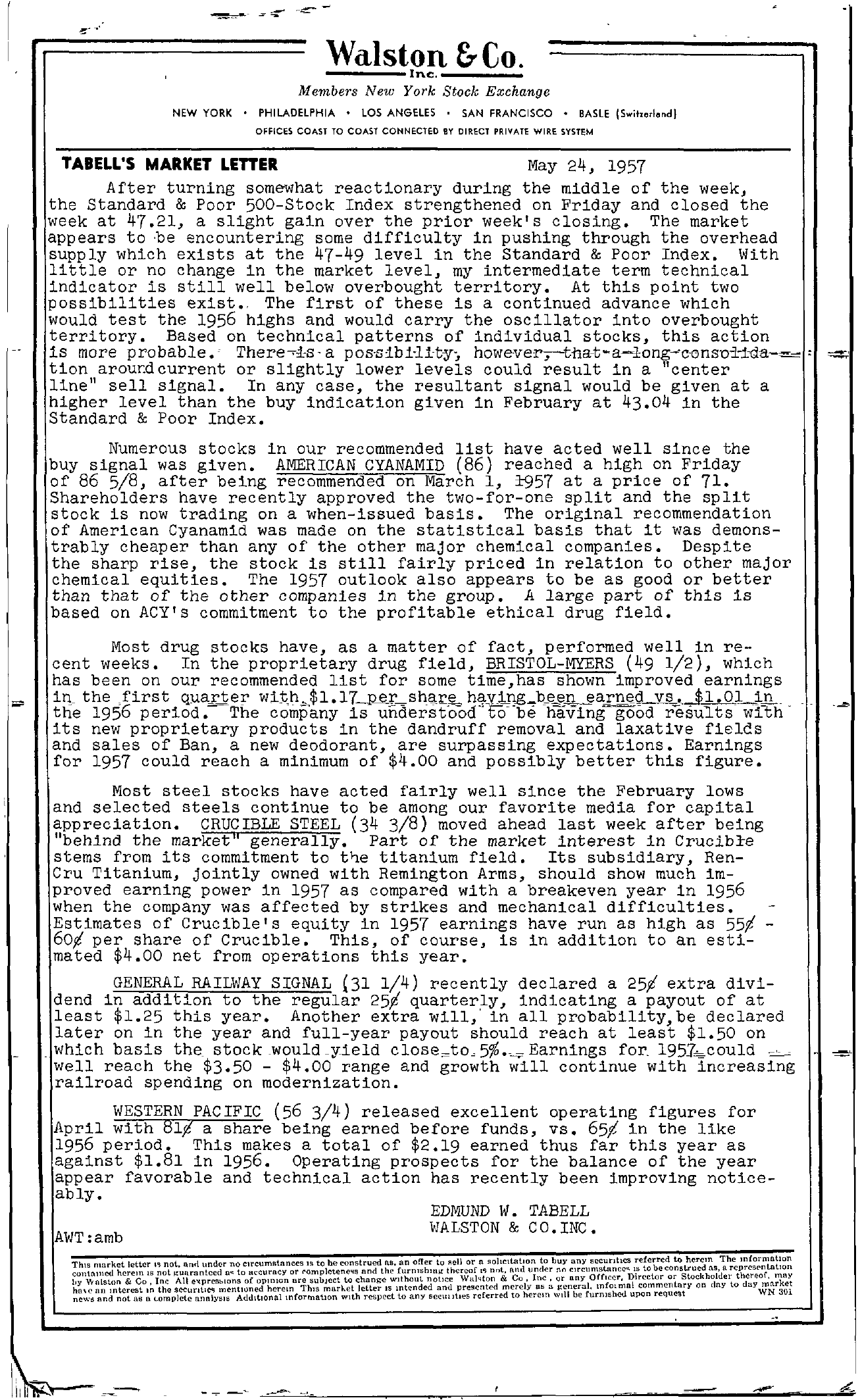 NEW YORK Walston &Co. – – – – I n c . Members New York Stock Exchange PHILADELPHIA' LOS ANGELES SAN FRANCISCO BASLE (Swawld) OFFICES COA.ST TO COAST CONNECTED BY DIRECT PRIVATE WIRE SYSTEM TABEll'S MARKET LEnER May 24, 1957 After turning somewhat reactionary during the middle of the week, the Standard & Poor 500-Stock Index strengthened on Friday and closed the week at 47.21, a slight gain over the prior week's closing. The market appears to be encountering some difficulty in pushing through the overhead supply which exists at the 47-49 level in the Standard & Poor Index. With little or no change in the market level, my intermediate term technical indicator is still well below overbought territory. At this point two possibilities exist . The first of these is a continued advance which would test the 1956 highs and would carry the oscillator into overbought territory. Based on technical patterns of individual stocks, this action is more probable. a posB1bi'lity-, 0 tion arour.dcurrent or slightly lower levels could result in a center line sell signal. In any case, the resultant signal would be given at a higher level than the buy indication given in February at 43.04 in the Standard & Poor Index. Numerous stocks in our recommended list have acted well since the buy signal was given. AMERICAN CYANAMID (86) reached a high on Friday of 86 5/8, after being recommended on March 1, I957 at a price of 71. Shareholders have recently approved the two-for-one split and the split stock is now trading on a when-issued basis. The original recommendation of American Cyanamid was made on the statistical basis that it was demonstrably cheaper than any of the other major chemical companies. Despite the sharp rise, the stock is still fairly priced in relation to other major chemical equities. The 1957 outlook also appears to be as good or better than that of the other companies in the group. A large part of this is based on ACY's commitment to the profitable ethical drug field. Most drug stocks have, as a matter of fact, performed well in re- cent weeks. In the proprietary drug field, BRISTOL-MYERS (49 1/2), which has been on our recommended list for some time,has shown improved earnings ill the ofirst quarter witoh.l.l vs .,.J\l.O,lilL the 1956 period .-The company is understood' tobe having-good results wHh its new proprietary products in the dandruff removal and laxative fields and sales of Ban, a new deodorant, are surpassing expectations. Earnings for 1957 could reach a minimum of 4.00 and possibly better this figure. Most steel stocks have acted fairly well since the February lows and selected steels continue to be among our favorite media for capital appreciation. CRUCIBLE STEEL (34 3/8) moved ahead last week after being behind the market generally. Part of the market interest in Crucibre stems from its commitment to titanium field. Its subsidiary, Ren- Cru Titanium, jOintly owned with Remington Arms, should show much im- proved earning power in 1957 as compared with a breakeven year in 1956 when the company was affected by E60s1timpeartesshoarfe Crucible's equity in of Crucible. ThiS, strike 1957 s and mechani earnings have cal dif run as fhiciguhltiaess5. 51 of course, is in addition to an esti- – mated 4.00 net from operations this year. dend GENERAL RAILWAY in addition to th eSIGrNeAgLula3r12511/4q) uraercteenrltyly, declared a indicating 251 extra divi- a payout of at least 1.25 this year. Another extra Will, in all probability,be declared later on in the year and full-year payout should reach at least 1.50 on which basis the stock wouldyield for well reach the 3.50 4.00 range and growth will continue with increasing railroad spending on modernization. April HwEiStThER5N1tPaACsIhFIaCre (56 3/4) being e released excellent arned before funds, operating figures for vs. 651 in the like 1956 period. This makes a total of 2.19 earned thus far this year as against 1.81 in 1956. Operating prospects for the balance of the year appear favorable and technical action has recently been improving notice- ably. EDMUND W. TABELL AvlT amb vJALSTON & CO.INC. This market letter l'l not. nnr! under no cIrcumstances IS to he construed ns, an olIer to I\cll or n soliCitation to buy any SCCUTlhcs referred to herem The conlnl11oU herem IB not a to accuracy or and the furnishIng thereof l'l nnt, and under on cIrcumstance' '.8 to I, Vvnlston & Co Inc All of opmlOn nrc subJect to change Without notIce & Co, Inc, or Ilny Officer, Director or toe 0 er CTCO, an mwrcst the SecUrttlC' mentIOned herem ThiS market letter IS mtended and presented merely liS a mfolmnl commentary on day to news und not as n Lompletc analYSIS AdditIOnal information With respect to any sec\lllhes referred to herem will be furnished upon requCt kY –