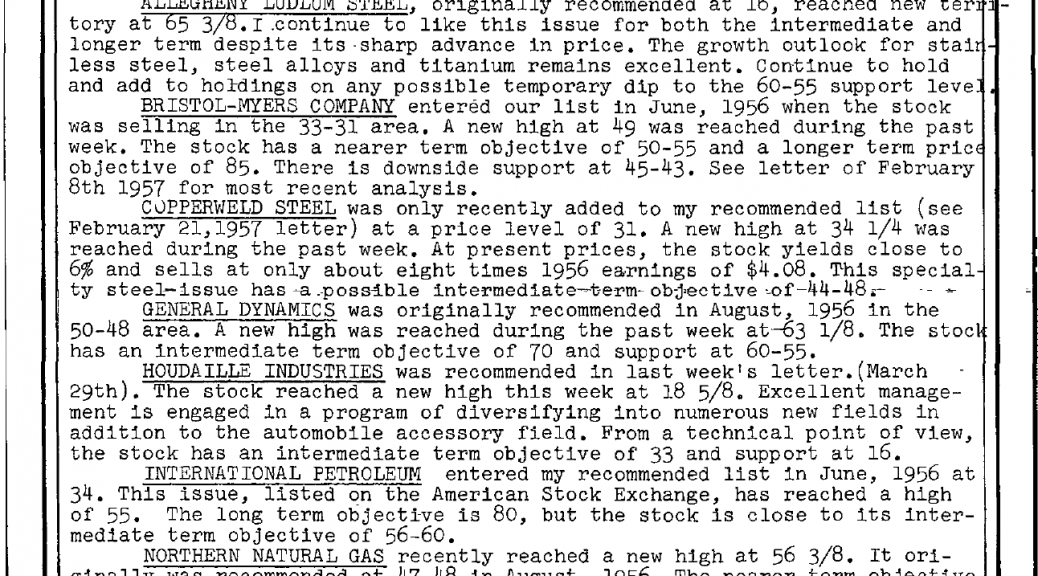 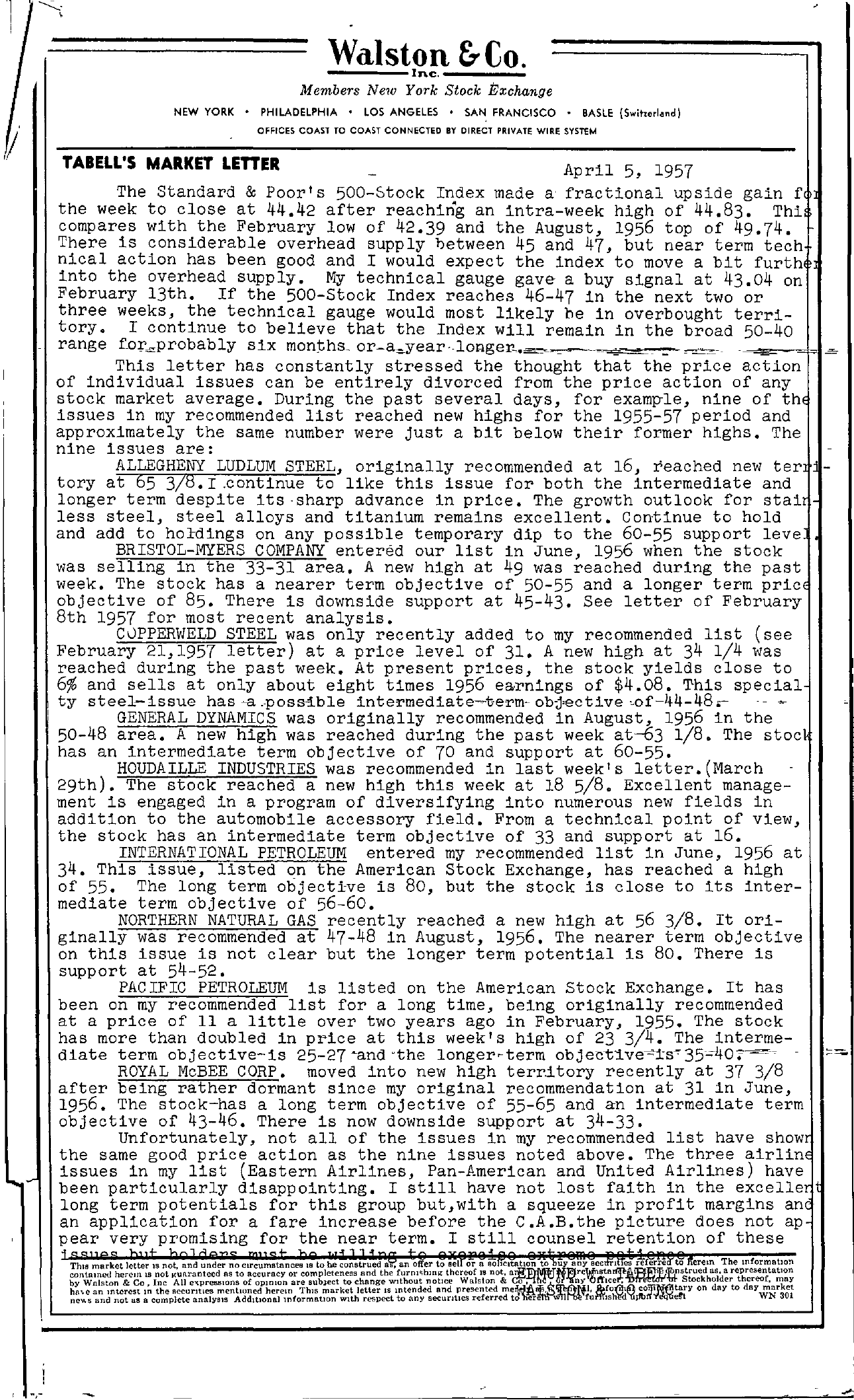 II i Walston &- Co. Inc, Members New York Stock EXchange V/' NEW YORK PHILADELPHIA LOS ANGELES SAN FRANCISCO BASLE (Swih.d..d) OFFICES COAST TO COAST CONNECTED BY DIRECT PRIVATE WIRE SYSTEM TABEll'S MARKET lmER April 5, 1957 The Standard & Poor's 500-Stock Index made a fractional upside gain f the week to close at 44.42 after reaching an intra-week high of 44.B3. Thi compares with the February low of 42.39 and the August, 1956 top of 49.74. There is considerable overhead supply Qetween 45 and 47, but near term tech nical action has been good and I would expect the index to move a bit furth into the overhead supply. My technical gauge gave a buy signal at 43.04 on February 13th. If the 500-Stock Index reaches 46-47 in the next two or three weeks, the technical gauge would most likely be in overbought terri- tory. range I continue to believe that f,orprobably six months. the Index will r-em-ain in the broad 50-40 This letter has constantly stressed the thought that the price action of individual issues can be entirely divorced from the price action of any stock market average. During the past several days, for nine of th issues in my recommended list reached new highs for the 1955-57 period and approximately the same number were just a bit below their former highs. The nine issues are ALLEGHENY LUDLUM STEEL, originally recommended at 16, reached new ter tory at 65 3/8.1 continue to like this issue for both the intermediate and longer term despite its-sharp advance in price. The growth outlook for stai less steel, steel alloys and titanium remains excellent. Continue to hold and add to holdings on any possible temporary dip to the 60-55 support leve BRISTOL-MYERS COMPANY entered our list in June, 1956 when the stock was selling in the 33-31 area. A new high at 49 was reached during the past week. The stock has a nearer term objective of 50-55 and a longer term pric objective of B5. There is downside support at 45-43. See letter of February Bth 1957 for most recent analysis. C0PPERvIELD STEEL was only recently added to my recommended list (see February 21,1957 letter) at a price level of 31. A new high at 34 1/4 was reached during the past week. At present prices, the stock yields close to 6 and sells at only about eight times 1956 earnings of 4.0B. This special ty steel-issue has -a poss1.ble ob-j'ectlve cof-44-48,- I GENERAL DYNAMICS was originally recommended in August, 1956 in the 50-48 area. A new high was reached during the past week at-63 l/B. The stocl has an intermediate term objective of 70 and support at 60-55. HOUDAILLE INDUSTRIES was recommended in last week's letter.(March ' 29th), The stock reached a new high this week at 18 5/B. Excellent manage- ment is engaged in a program of diversifying into numerous new fields in addition to the automobile accessory field. From a technical point of view, the stock has an intermediate term objective of 33 and support at 16. INTERNATIONAL PETROLEUM entered my recommended list in June, 1956 at 34. This issue, listed on the American Stock Exchange, has reached a high of 55. The long term objective is Bo, but the stock is close to its inter- mediate term objective of 56-60. NORTHERN NATURAL GAS recently reached a new high at 56 3/8. It ori- ginally was recommended at 47-4B in August, 1956. The nearer term objective on this issue is not clear but the longer term potential is 80. There is support at 54-52. PACIFIC PETROLEUM is listed on the American stock Exchange. It has been on my recommended list for a long time, being originally recommended at a price of 11 a little over two years ago in February, 1955. The stock has more than doubled in price at this week's high of 23 3/4. The interme- diate term objective-is 25-27 -the .'. ' ROYAL McBEE CORP. moved into new high territory recently at 37 3/8 after being rather dormant since my original recommendation at 31 in June, 1956. The stock-has a long term objective of 55-65 and an intermediate term objective of 43-46. There is now downside support at 34-33. Unfortunately, not all of the issues in my recommended list have showr the same good price action as the nine issues noted above. The three airlinE issues in my list (Eastern Airlines, Pan-American and United Airlines) have been particularly disappointing. I still have not lost faith in the exceller long term potentials for this group but, with a squeeze in profit margins anc an application for a fare increase before the C.A.B.the picture does not ap pear very promising for the near term. I still counsel retention of these 10Q,0 hf– hnl,Yo of- h, . . This market contained he lette rem r IS InS not, and under no circumstances ot J(unrantccd as to accuracy or c 19 to ompl he eten es s and the an to se!.or . a .tany referr,e! The Ulformahon thereof IS not, ariilli'rMirTNlCtrcwnstarilfl'il1n1tlV11LclO.nstrued as, a representatIOn by Walston & Co Inc All c(prl!!BiOnS of opinIOn are subJect to change Without notice Walston & Stockholder thereof, may an mtcrcst the sccurltles mentioned herein ThiS market letter IS Intended and presented meklA ' JOfotih l on day to day market ne…. s and not us a complete analysls AddltlOnal mformatlOJl With respcct to any secuntlcs referred td'iier WN 301 I