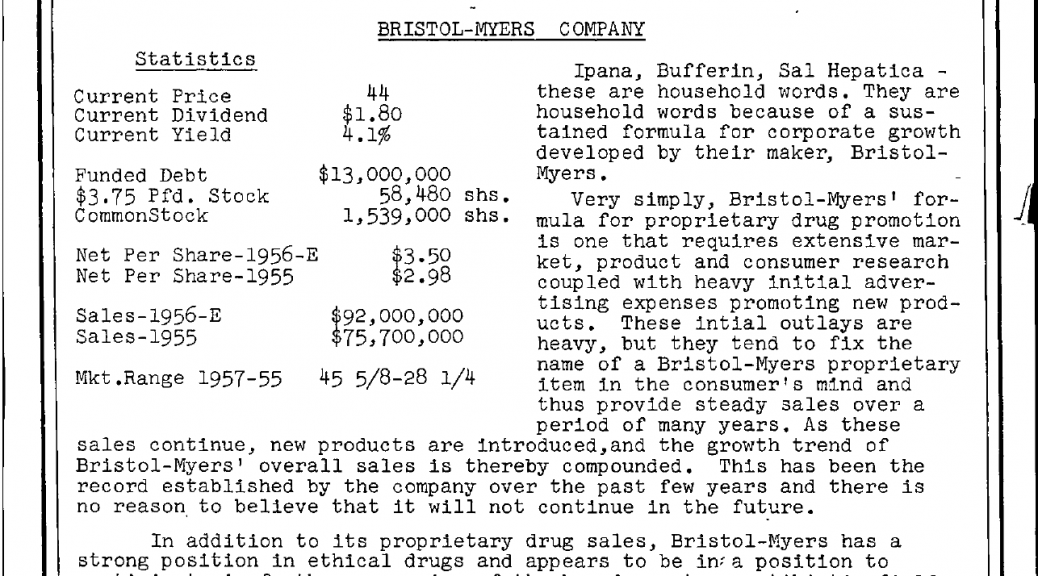 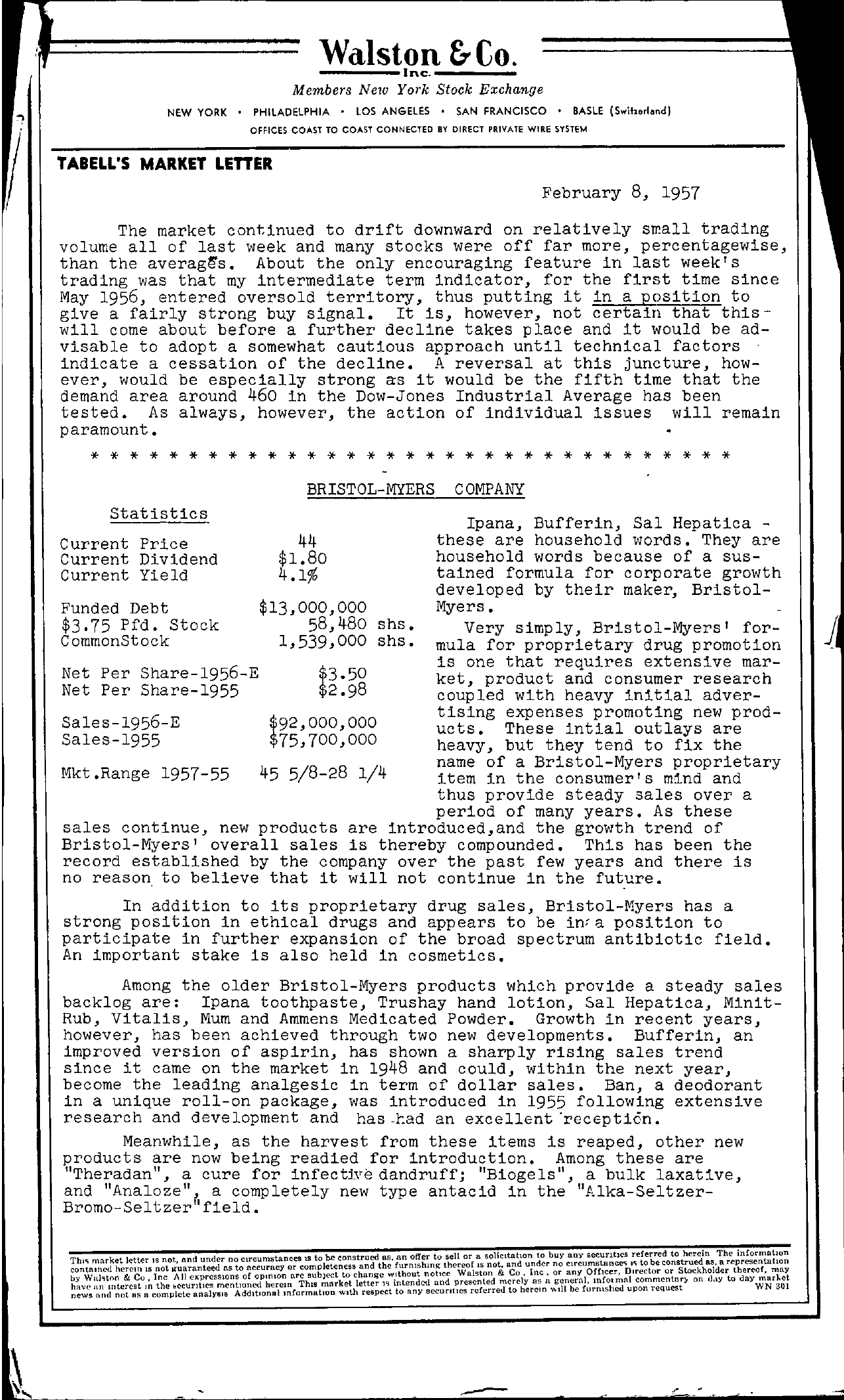 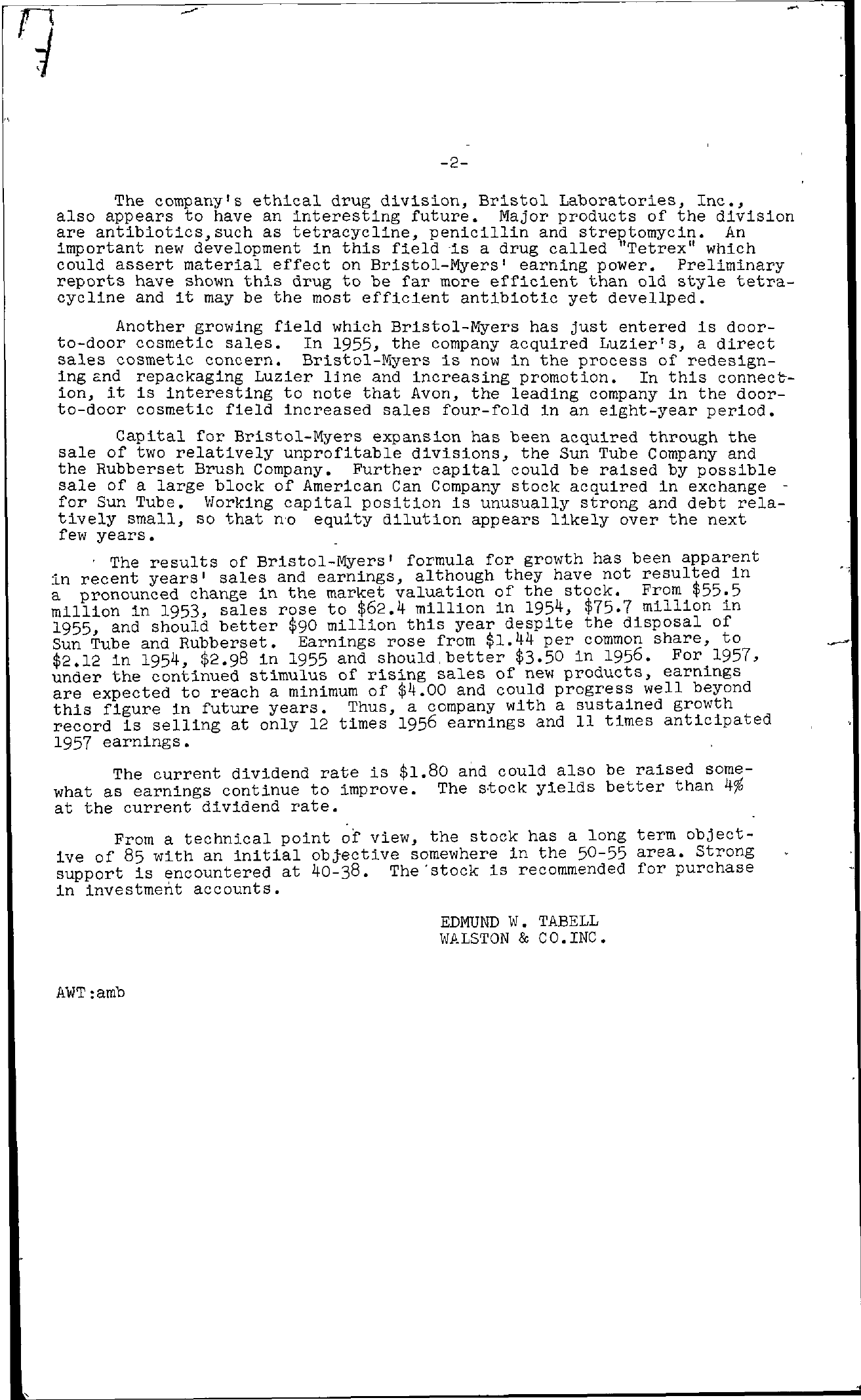 W—–a–l-s-tIoncn.–&—-C-o. Members N e1V York Stock Exchange NEW YORK PHILADELPHIA LOS ANGELES SAN FRANCISCO BASLE (Swit,l,nd) OFFICES COAST TO COAST CONNECTED BY DIRECT PRIVATE WIRE SYSTEM TABELL'S MARKET LETTER February 8, 1957 The market continued to drift downward on relatively small trading volume all of last week and many stocks were off far more, percentagewise, than the About the only encouraging feature in last week's trading was that my intermediate term indicator, for the first time since May 1956, entered oversold territory, thus putting it in a position to give a fairly strong buy signal. It is, however, not certain that this- will come about before a further decline takes place and it would be ad- visable to adopt a somewhat cautious approach until technical factors indicate a cessation of the decline. A reversal at this juncture, how- ever, would be especially strong it would be the fifth time that the demand area around 460 in the Dow-Jones Industrial Average has been tested. As always, however, the action of individual issues will remain paramount. BRISTOL-MYERS COMPANY Statistics Ipana, Bufferin, Sal Hepatica – Current Price Current Dividend Current Yield 44 1.80 4.1 these are household words. They are household words because of a sus- tained formula for corporate growth developed by their Bristol- Funded Debt 13,000,000 Myers. 3.75 Pfd. Stock CommonStock 58,480 shs. 1,539,000 shs. Very simply, Bristol-Myers' formula for proprietary drug promotion Net Per Share-1956-E Net Per Share-1955 is one that requires extensive market, product and consumer research coupled with heavy initial adver- Sales-1956-E Sales-1955 92,000,000 75,700,000 tising expenses promoting new products. These intial outlays are heavy, but they tend to fix the Mkt.Range 1957-55 45 5/8-28 1/4 name of a Bristol-Myers proprietary item in the consumer's mind and thus provide steady sales over a period of many years. As these sales continue, new products are introduced,and the growth trend of Bristol-Myers' overall sales is thereby compounded. This has been the record established by the company over the past few years and there is no reason to believe that it will not continue in the future. In addition to its proprietary drug sales, has a strong position in ethical drugs and appears to be in a position to participate in further expansion of the broad spectrum antibiotic field. An important stake is also held in cosmetics. Among the older Bristol-Myers products which provide a steady sales backlog are Ipana toothpaste, Trushay hand lotion, Sal Hepatica, MinitRub, Vitalis, Mum and Ammens Medicated Powder. Growth in recent years, however, has been achieved through two new developments. Bufferin, an improved version of aspirin, has shown a sharply rising sales trend since it carne on the market in 1948 and COUld, within the next year, become the leading analgesic in term of dollar sales. Ban, a deodorant in a unique roll-on package, was introduced in 1955 following extensive research and development and has.tad an excellent reception. Meanwhile, as the harvest from these items is reaped, other new products are now being readied for introduction. Among these are Theradan, a cure for dandruff; Biogels, a bulk laxative, and Analoze, a completely new type antacid in the Alka-Seltzer- Bromo-Seltzerfield. – -2- The company1s ethical drug division, Bristol Laboratories, Inc., also appears to have an interesting future. Major products of the division are antibiotics,such as tetracycline, penicillin and strev,tomycin. An important new development in this field -is a drug called 'Tetrex which could assert material effect on Bristol-Myers I earning power. Preliminary reports have shown this drug to be far more efficient than old style tetracycline and it may be the most efficient antibiotic yet devellped. Another growing field which Bristol-Myers has just entered is doorto-door cosmetic sales. In 1955, the company acquired Luzier1s, a direct sales cosmetic concern. Bristol-Myers is now in the process of redesign- repackaging Luzier line and increasing promotion. In this ion, it is interesting to note that Avon, the leading company in the doorto-door cosmetic field increased sales four-fold in an eight-year period. Capital for Bristol-Myers expansion has been acquired through the sale of two relatively unprofitable divisions, the Sun Tube Company and the Rubberset Brush Company. Further capital could be raised by possible sale of a large block of American Can Company stock acquired in exchange for Sun Tube. Working capital position is unusually strong and debt relatively small, so that n'o equity dilution appears likely over the next few years. in , The recent yreesaursltls of Bristol-Myersl sales and earnings, formula for growth has been apparent although they have not resulted in a pronounced change in the market valuation of the stock. From 55.5 million in 1953, sales rose to 62.4 million in 1954, 75.7 million in 1955, and should better 90 million this year despite the disposal of Sun Tube and Rubberset. Earnings rose from 1.44 per common share, to 2.12 in 1954, 2.98 in 1955 and should,better 3.50 in 1956. For.1957, under the continued stimulus of rising sales of new products, earnlngs are expected to re'ach a minimum of 4.00 and could progress well beyond this figure in future years. Thus, a company with a sustained growth record is selling at only 12 times 1956 earnings and 11 times anticipated 1957 earnings. The current dividend rate is 1.80 and could also be raised somewhat as earnings continue to improve. The stock yields better than 4 at the current dividend rate. From a technical point of view, the stock has a long term object- ive of 85 with an initial objective somewhere in the 50-55 area. Strong support is encountered at 40-38. The 'stock is recommended for purchase in investment accounts. EDMUND W. TABELL WALSTON & CO.INC. AWTamb ,