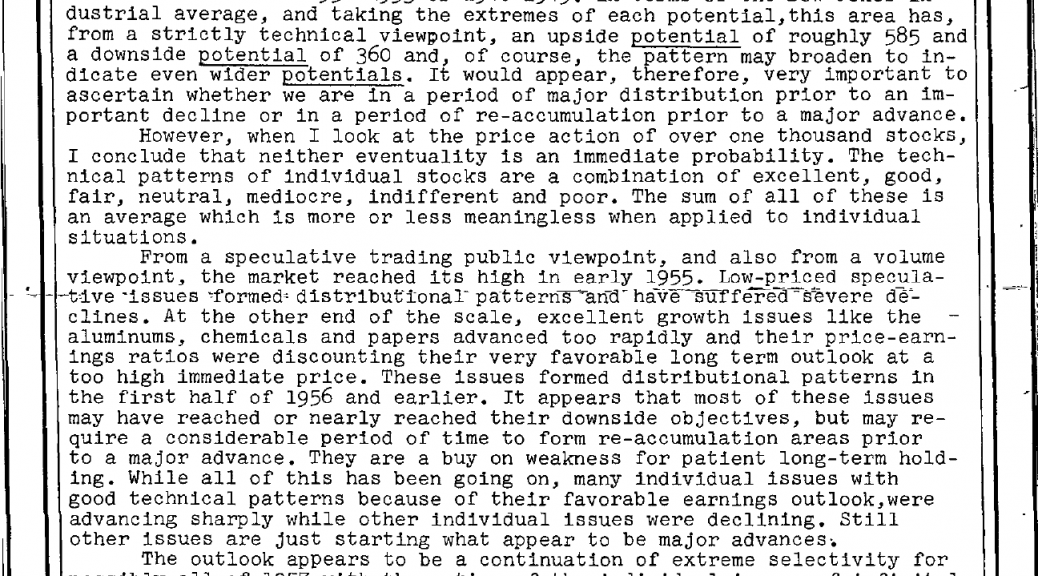 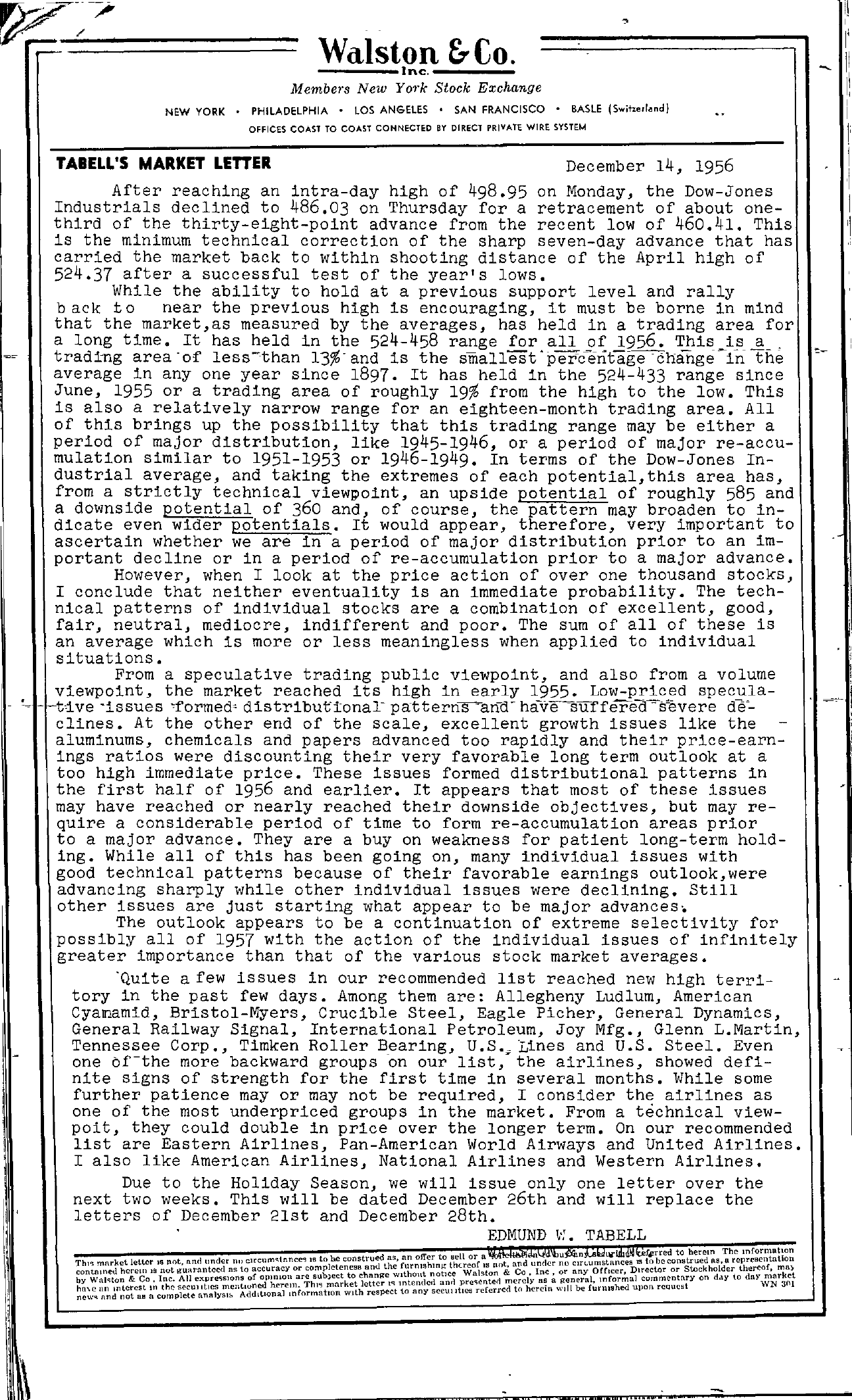 Wdlston &- Co. – – – – I n c . – Members New Yo,'k Stock Exchange NEW YORK PHILADELPHIA LOS ANGELES SAN FRANCISCO BASLE ISw;t,Id I OFFICES COAST TO COAST CONNECTED BY DIRECT PRIVATE WiRE SYSTEM TABELL'S MARKET LETTER December 14, 1956 After reaching an intra-day high of 498.95 on Monday, the Dow-Jones Industrials declined to 486.03 on Thursday for a retracement of about one- third of the thirty-eight-point advance from the recent low of 460.41. This is the minimum technical correction of the sharp seven-day advance that has carried the market back to within shooting distance of the April high of 524.37 after a successful test of the year's lows. While the ability to hold at a previous support level and rally back to near the previous high is encouraging, it must be borne in mind that the market,as measured by the averages, has held in a trading area for a long time, It has held in the 524-458 range for all of 1956. This is a , trading area'of less-than 13'and is the smallest'perceritage'change-inthe average in anyone year since 1897. It has held in the 524-433 range since June, 1955 or a trading area of roughly 19 from the high to the low. This is also a relatively narrow range for an eighteen-month trading area. All of this brings up the possibility that this trading range may be either a period of major distribution, like 1945-1946, or a period of major re-accu- mulation similar to 1951-1953 or 1946-1949. In terms of the Dow-Jones In- dustrial average, and taking the extremes of each potential,this area has, from a strictly technical an upside potential of roughly 585 and a downside potential of 360 and, of course, the pattern may broaden to in- dicate even wider potentials. It would appear, therefore, very important to ascertain whether we are in a period of major distribution prior to an im- portant decline or in a period of re-accumulation prior to a major advance. However, when I look at the price action of over one thousand stocks, I conclude that neither eventuality is an immediate probability. The tech- nical patterns of individual stocks are a combination of excellent, good, fair, neutral, mediocre, indifferent and poor. The sum of all of these is an average which is more or less meaningless when applied to individual situations. From a speculative trading public viewpoint, and also from a volume viewpoint, the market reached its high in early 1955. Low-priced specula- . -issues 'formeddistributional'patterns'and'have clines. At the other end of the scale, excellent growth issues like the – aluminums, chemicals and papers advanced too rapidly and their price-earn- ings ratios were discounting their very favorable long term outlook at a too high immediate price. These issues formed distributional patterns in the first half of 1956 and earlier. It appears that most of these issues may have reached or nearly reached their downside objectives, but may re- quire a conSiderable period of time to form re-accumulation areas prior to a major advance. They are a buy on weakness for patient long-term hold- ing. While all of this has been going on, many individual issues with good technical patterns because of their favorable earnings outlook,were advancing sharply while other individual issues were declining. Still other issues are just starting what appear to be major advances. The outlook appears to be a continuation of extreme selectivity for possibly all of 1957 with the action of the individual issues of infinitely greater importance than that of the various stock market averages. 'Quite afew issues in our recommended list reached new high terri- tory in the past few days. Among them are Allegheny Ludlum, American Cyanamid, Bristol-Myers, Crucible Steel, Eagle Picher, General Dynamics, General Railway Signal, International Petroleum, Joy Mfg., Glenn L.Martin, Tennessee Corp., Timken Roller Bearing, U.S, 'Lines and U.S. Steel. Even one of-the more backward groups on our list, the airlines, showed definite signs of strength for the first time in several months. While some further patience mayor may not be required, I consider the airlines as one of the most underpriced groups in the market. From a technical viewpOit, they could double in price over the longer term. On our recommended list are Eastern Airlines, Pan-American World Airways and United Airlines. I also like American Airlines, National Airlines and Western Airlines. Due to the Holiday Season, we will issue only one letter over the next two weeks. This will be dated December 26th and will replace the letters of December 21st and December 28th. EDMUND \';. TABELL mnrkct letter 18 not, nnd under n clrcum'lnnce'l 18 to he construed as, nn contlllned herein IS not gunranteed as 10 accuracy or completeness and the II i4lttI3lLlUNluintChllriLfNlJf&rred to herein The Information Infto Sh' 0( not and under no Clrl.umstnnces is to be construed as, n representation t 1st n &. Co Inc or nny Officer Director or Stockholder thereof, rna by Wal;ton & Co. Inc. All cxpre;SlOns of ar;hubJcc\tOt merely as general. cummentary on day to lin Interest In the seculltlCS mentlOne crem ,mnr e the pect to any 5ee\1Iltles referred to herein will be furnished UIJon new find not as n complete analysto. AdditIOnal III orma Ion WI res ., I ,, . ' . . . . . 11 . 1111 'Ie . . . . .