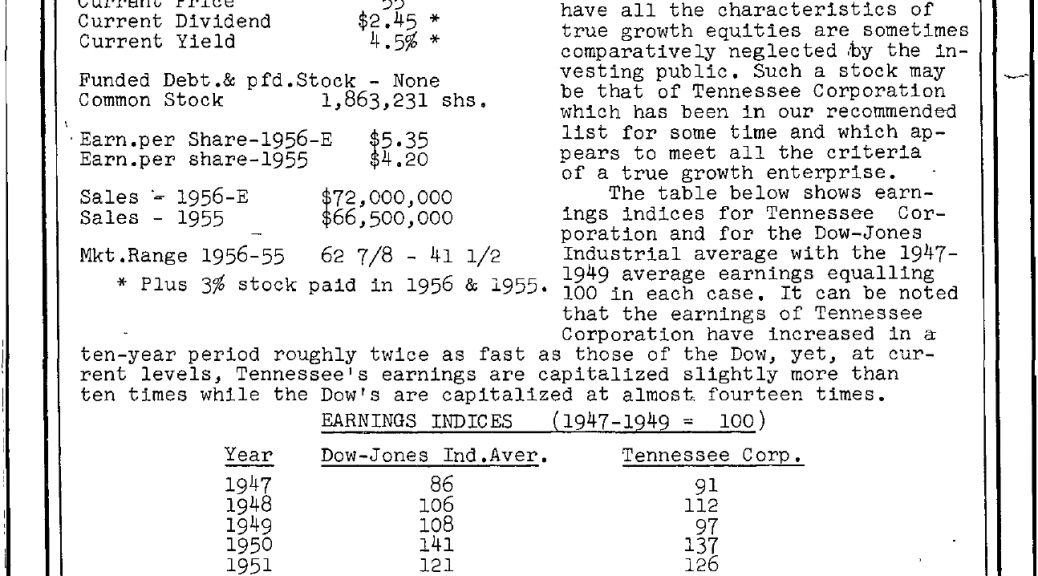 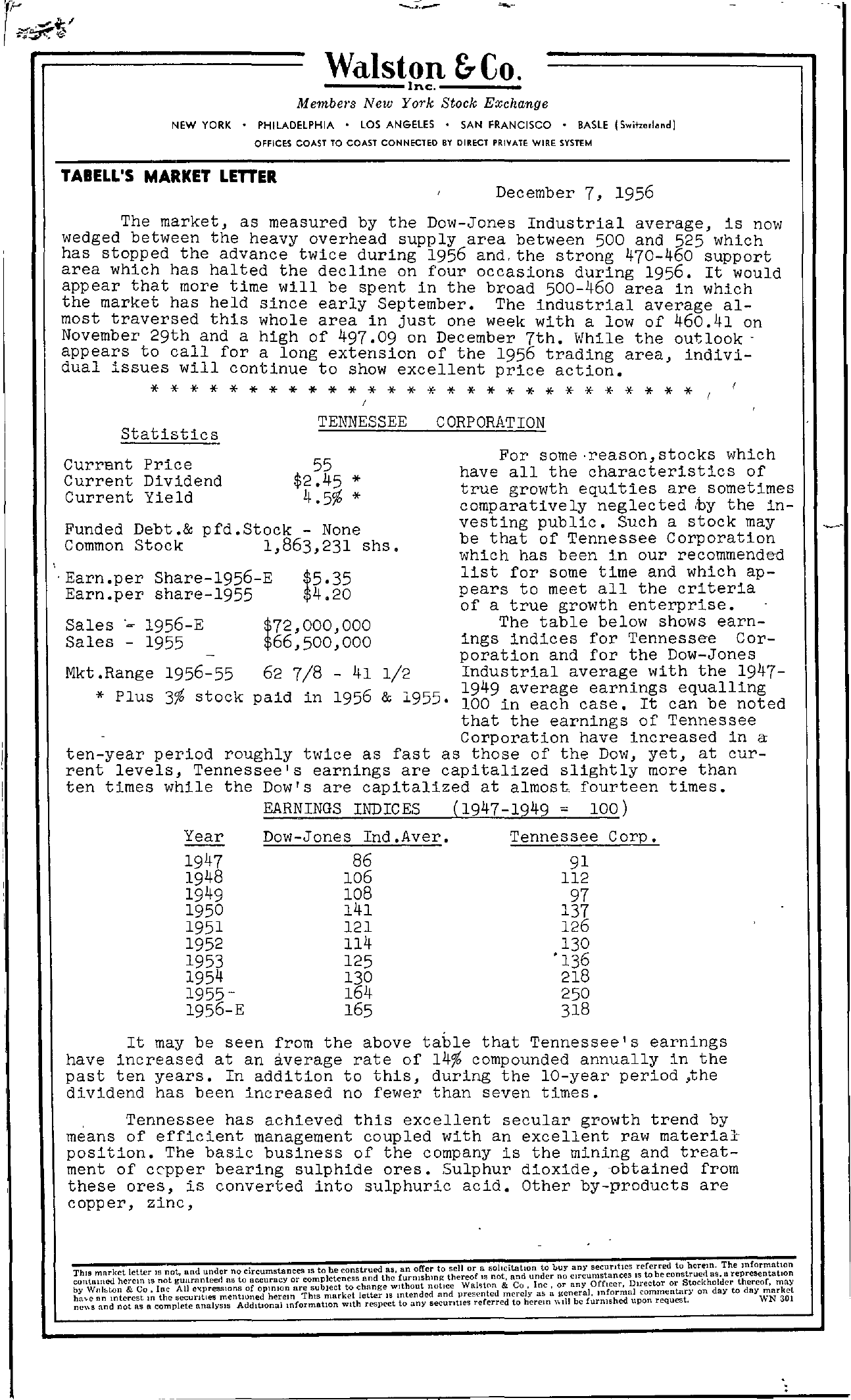 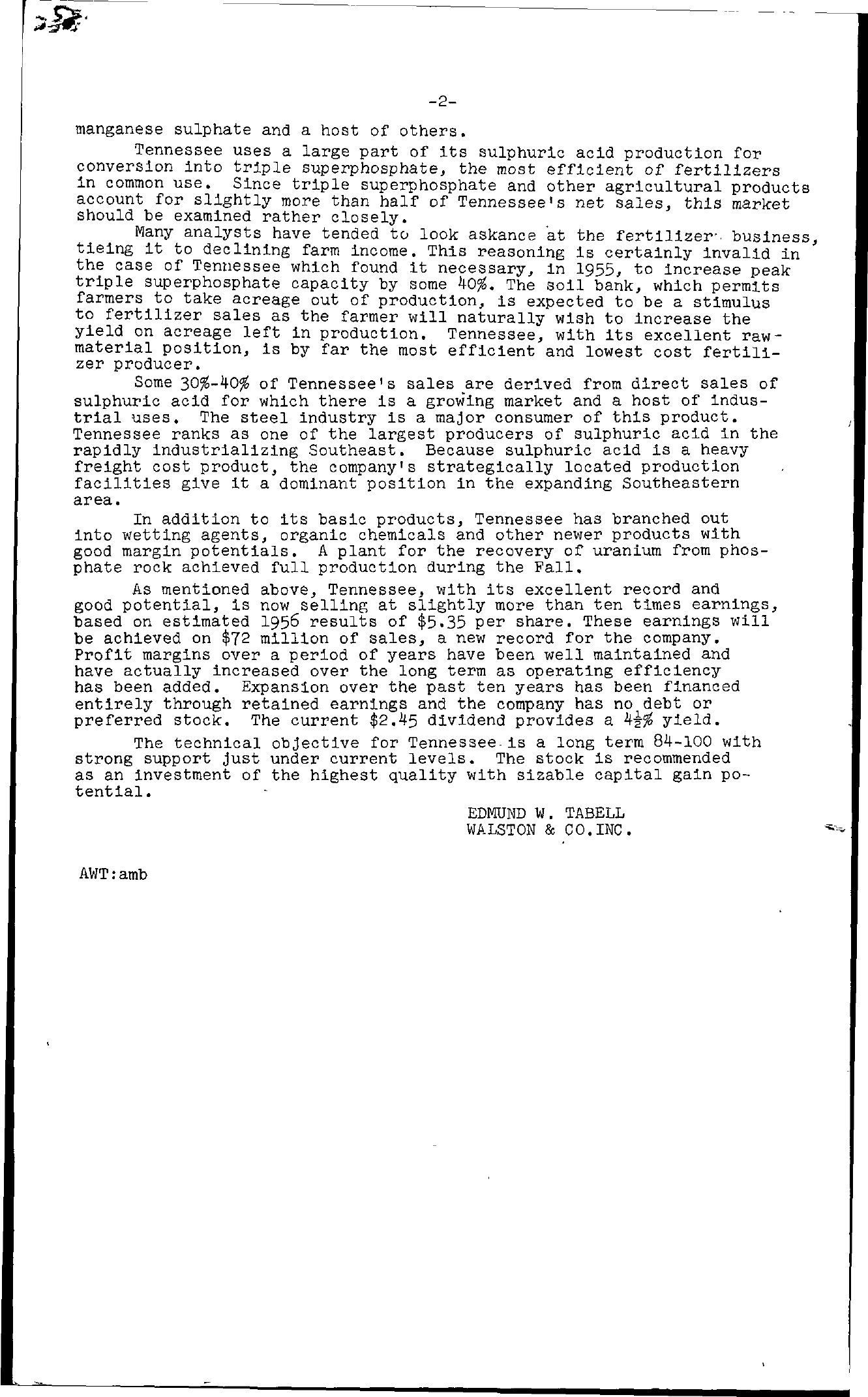 — Walston &Co. Inc. Members New York Stock EXchange NEW YORK PHILADELPHIA LOS ANGELES SAN FRANCISCO BASLE (Swa,ld) OFFICES COAST TO COAST CONNECTED BY DIRECT PRIVATE WIRE SYSTEM TABELL'S MARKET LEnER , December 7, 1956 The market, as measured by the Dow-Jones Industrial average, is now wedged between the heavy overhead supply area between 500 and 525 which has stopped the advance twice during 1956 and, the strong 470-460 support area which has halted the decline on four occasions during 1956. It would appear that more time will be spent in the broad 500-460 area in which the market has held since early September. The industrial average almost traversed this whole area in just one week with a low of 460.41 on November 29th and a high of 497.09 on December 7th. While the outlookappears to call for a long extension of the 1956 trading area, individual issues will continue to show excellent price action. / I Statistics TENNESSEE CORPORATION Currant Price Current Dividend Current Yield 55 2.45 4.5 For somereason,stocks which have all the characteristics of true growth equities are sometimes comparatively neglected ,by the in- Funded Debt.& pfd.Stock – None Common Stock , 1,863,231 shs. . Earn.per Share-1956-E 5.35 Earn.per share-1955 4.20 vesting public. Such a stock may be that of Tennessee Corporation which has been in our recommended list for some time and which appears to meet all the criteria of a true growth enterprise. Sales 1956-E Sales – 1955 72,000,000 66,500,000 The table below shows earnings indices for Tennessee Corporation and for the Dow-Jones Mkt.Range 1956-55 62 7/8 – 41 1/2 Industrial average with the 1947- Plus 3 stock paid in 1956 & 1955. 1949 average earnings equalling 100 in each case. It can be noted that the earnings of Tennessee – Corporation have increased in a ten-year period roughly twice as fast as those of the Dow, yet, at cur- rent levels, Tennessee's earnings are capitalized slightly more than ten times while the Dow's are capitalized at fourteen times. EARNINGS INDICES (1947-1949 100) -Ye-ar 1947 1948 1949 1950 1951 1952 1953 1954 19551956-E Dow-Jones Ind.Aver. 86 106 108 141 121 114 125 130 164 165 Tennessee Corp. 91 112 97 137 126 130 '136 218 250 318 It may be seen from the above table that Tennessee's earnings have increased at an average rate of 14 compounded annually in the past ten years. In addition to this, during the 10-year period dividend has been increased no fewer than seven times, Tennessee has achieved this excellent secular growth trend by means of efficient management coupled with an excellent raw material position. The basic business of the company is the mining and treatment of cc-pper bearing sulphide ores. Sulphur dioxide, -obtained from these ores, is converted into sulphuric acid. Other by-products are copper, zinc, — .. -2- manganese sulphate and a host of others. Tennessee uses a large part of its sulphuric acid production for conversion into triple superphosphate, the most efficient of fertilizers in common use. Since triple superphosphate and other agricultural products account for slightly more than half of Tennessee's net sales, this market should be examined rather closely. Many analysts have tended tu look askance at the fertilizer', business, tieing it to declining farm income. This reasoning is certainly invalid in the case of Tennessee which found it necessary, in 1955, to increase peak triple superphosphate capacity by some 40. The soil bank, which permits farmers to take acreage out of production, is expected to be a stimulus to fertilizer sales as the farmer will naturally wish to increase the yield on acreage left in production. Tennessee, with its excellent rawmaterial position, is by far the most efficient and lowest cost fertilizer producer. Some 30-40 of Tennessee's sales are derived from direct sales of sulphuric acid for which there is a growing market and a host of industrial uses. The steel industry is a major consumer of this product. Tennessee ranks as one of the largest producers of sulphuric acid in the rapidly industrializing Southeast. Because sulphuric acid is a heavy freight cost product, the company's strategically located production facilities give it a dominant position in the expanding Southeastern area. In addition to its basic products, Tennessee has branched out into wetting agents, organic chemicals and other newer products with good margin potentials. A plant for the recovery of uranium from phosphate rock achieved full production during the Fall. As mentioned above, Tennessee, with its excellent record and good potential, is now selling at slightly more than ten times earnings, based on estimated 1956 results of 5.35 per share. These earnings will be achieved on 72 million of sales, a new record for the company. Profit margins over a period of years have been well maintained and have actually increased over the long term as operating efficiency has been added. Expansion over the past ten years has been financed entirely through retained earnings and the company has no debt or preferred stock. The current 2.45 dividend provides a yield. The technical objective for Tennessee is a long term 84-100 with strong support just under current levels. The stock is recommended as an investment of the highest quality with sizable capital gain potential. EDMUND W. TABELL WALSTON & CO.INC. AWTamb