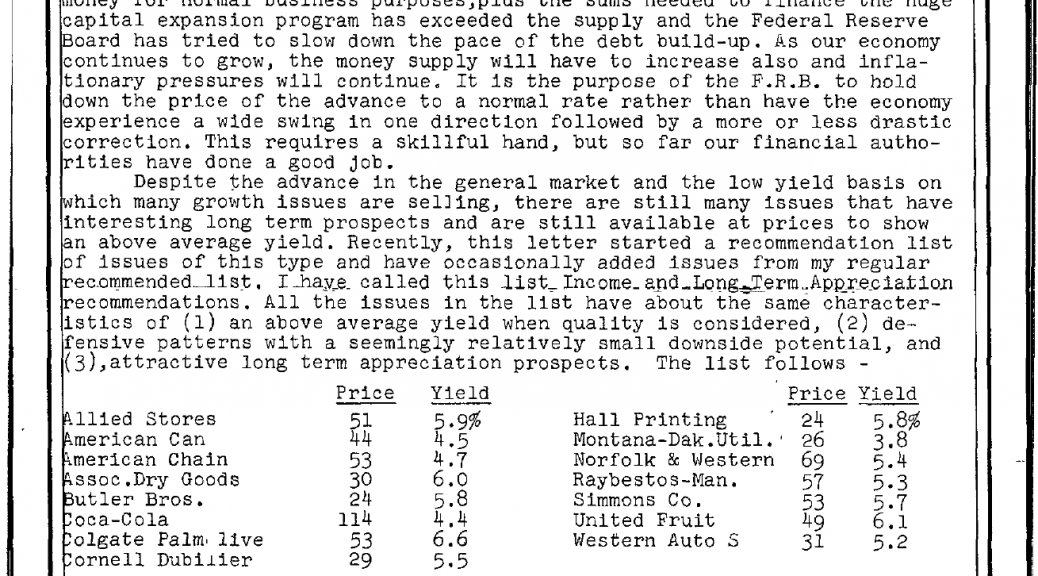 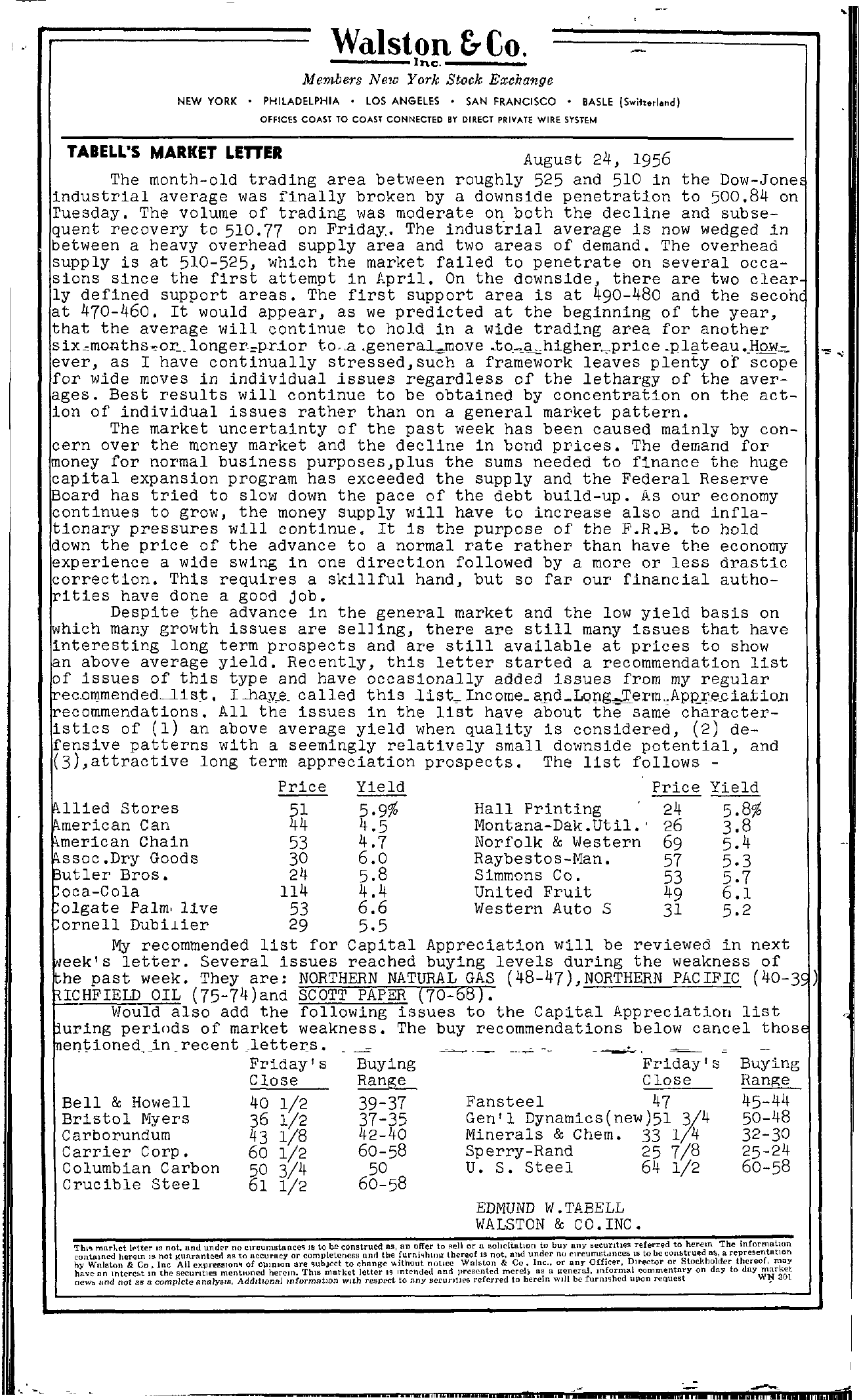 .' &- Co .Walston—-Inc. Members New York Stock Exchange NEW YORK PHILADELPHIA LOS ANGELES SAN FRANCISCO BASLE (Sw;t,.dd) OFFICES COAST TO COAST CONNECTED BY DIRECT PRIVATE WIRE SYSTEM , TABELL'S MARKET LEnER August 24, 1956 The month-old trading area between roughly 525 and 510 in the Dow-Jone industrial average was finally broken by a downside penetration to 500.84 on ruesday. The volume of trading was moderate on both the decline and subse- quent recovery to 510.77 on Friday,. The industrial average is now wedged in between a heavy overhead supply area and two areas of demand. The overhead supply is at 510-525, which the market failed to penetrate on several occa- sions since the first attempt in April. On the downside, there are tvlO clear ly defined support areas. The first support area is at 490-480 and the secon at 470-460. It would appear, as we predicted at the beginning of the year, that the average will continue to hold in a wide trading area for another sixmollths..,or,longerp.r.ior to ..a .generalmove ever, as I have continually stressed,such a framework leaves plenty of scope for wide moves in individual issues regardless of the lethargy of the averages. Best results will continue to be obtained by concentration on the act- ion of individual issues rather than on a general market pattern. The market uncertainty of the past week has been caused mainly by con- cern over the money market and the decline in bond prices. The demand for money for normal business purposes,plus the sums needed to finance the huge capital expansion program has exceeded the supply and the Federal Reserve Board has tried to slow down the pace of the debt build-up. As our economy continues to grow, the money supply will have to increase also and inflationary pressures will continue. It is the purpose of the F.R.B. to hold down the price of the advance to a normal rate rather than have the economy experience a wide swing in one direction followed by a more or less drastic correction. This requires a skillful hand, but so far our financial authorities have done a good job. Despite the advance in the general market and the low yield basis on many growth issues are selJing, there are still many issues that have interesting long term prospects and are still available at prices to show an above average yield. Recently, this letter started a recommendation list of issues of this type and have occasionally added issues from my regular rec,ommended—.list. I haye, called this Inc ome a!ldLoDgTermApRr,e,ciation recommendations. All the issues in the list have about the same character- istics of (1) an above average yield when quality is considered, (2) defensive patterns with a seemingly relatively small downside potential, and (3),attractive long term appreciation prospects. The list follows – Price Yield Price Yield Stores p,merican Can I-\-merican Chain Goods Bros. r.olgate Palm, live rornell Dubi.lier 51 5.9 44 4.5 53 4.7 30 6.0 24 5.8 114 4.4 53 6.6 29 5.5 Hall Printing Montana-Dak.Util.' Norfolk & Western Raybestos-Man. Simmons Co. United Fruit Western Auto S 24 26 69 57 53 49 31 5.8 3.8 5.4 5.3 5.7 6.1 5.2 My recommended list for Capital Appreciation will be reviewed in next week's letter. Several issues reached buying levels during the weakness of Lhe past week. They are NORTHERN NATURAL GAS (48-47),NORTHERN PACIFIC (40-35) KICHFIELD OIL (75-74)and SCOTT PAPER (70-68). \IIould also add the following issues to the Capital Appreciation list periods of market weakness. The buy recommendations below cancel thOSE '', '-'-', ,—-'–, c- Friday's Buying Friday's Buying Close Range Close Range Bell & Howell Bristol Myers Carborundum Carrier Corp. Columbian Carbon Crucible Steel 40 1/2 36 1/2 43 1/8 60 1/2 50 3/4 61 1/2 39-37 37-35 42-40 60-58 50 60-58 Fansteel 47 Gen'l Dynamics(new)51 3/4 Minerals & Chern. 33 1/4 Su.peSrr.y -Rand Steel 25 7/8 64 1/2 EDMUND vI. TABELL vlALSTON & CO. INC. 45-44 50-48 32-30 25- 24 60-58 Thl'l mnrhct il'ttcr IS not. lind under no ClrcumstnnCcllS to he construed as, an offer to ell or a !\oilcitation to bu' any securities referred to herem The informatIon contluned herem IS not gunrantC(!d as to aCCurncy or completcness nnrl the thereof IS not, and under nu elreumstmees IS to be construed aI;, a representation Iby Walston & Co, Inc All expreSSlOnQ of OlllfllOn nre ;ubJcct to change v.ithout notice \Valston & Co, Inc., or any Officer, Director or Stockholder thereof, may have nn mtcrclt In the securltlC!l mentIOned herem. 'fhIS market letter lfltcnded and presented mcrei). as a general, lIlformal eommentary on Jay to Jay rrnrkgt neWb lIMa not as u complete analYSIS, AalhtlQnal IIlfl)rmatlOn With rClmect. to n-ny SCCUrJtJeS referred to herein Will be upon request ' li 3 1 '- . ——. 11. ii'''h..,aa,.,., iiL…Wii.ii.lii3TLi..;& . .rmn.. . . . 'i1tii ilL . .ift