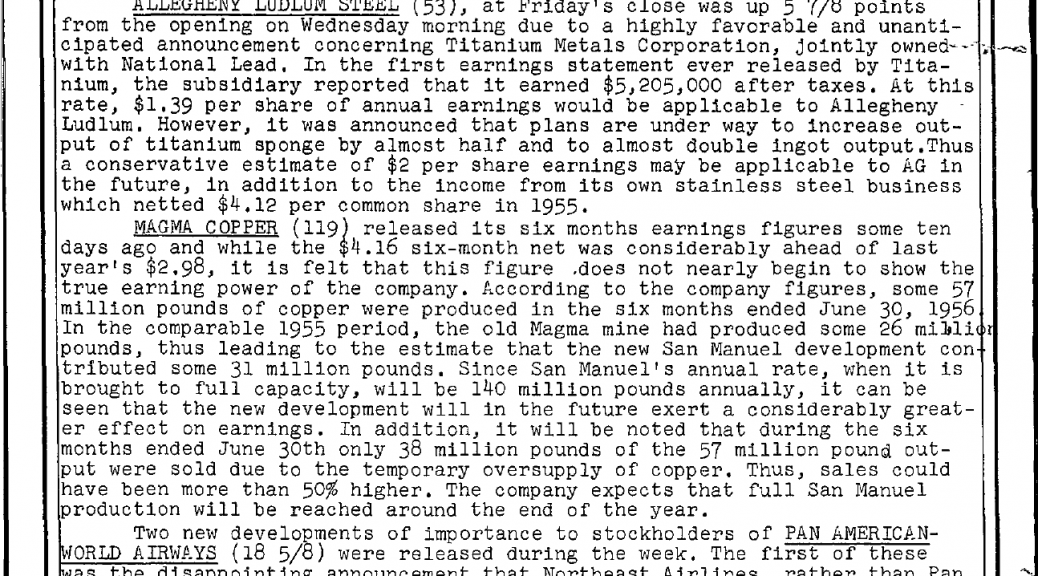 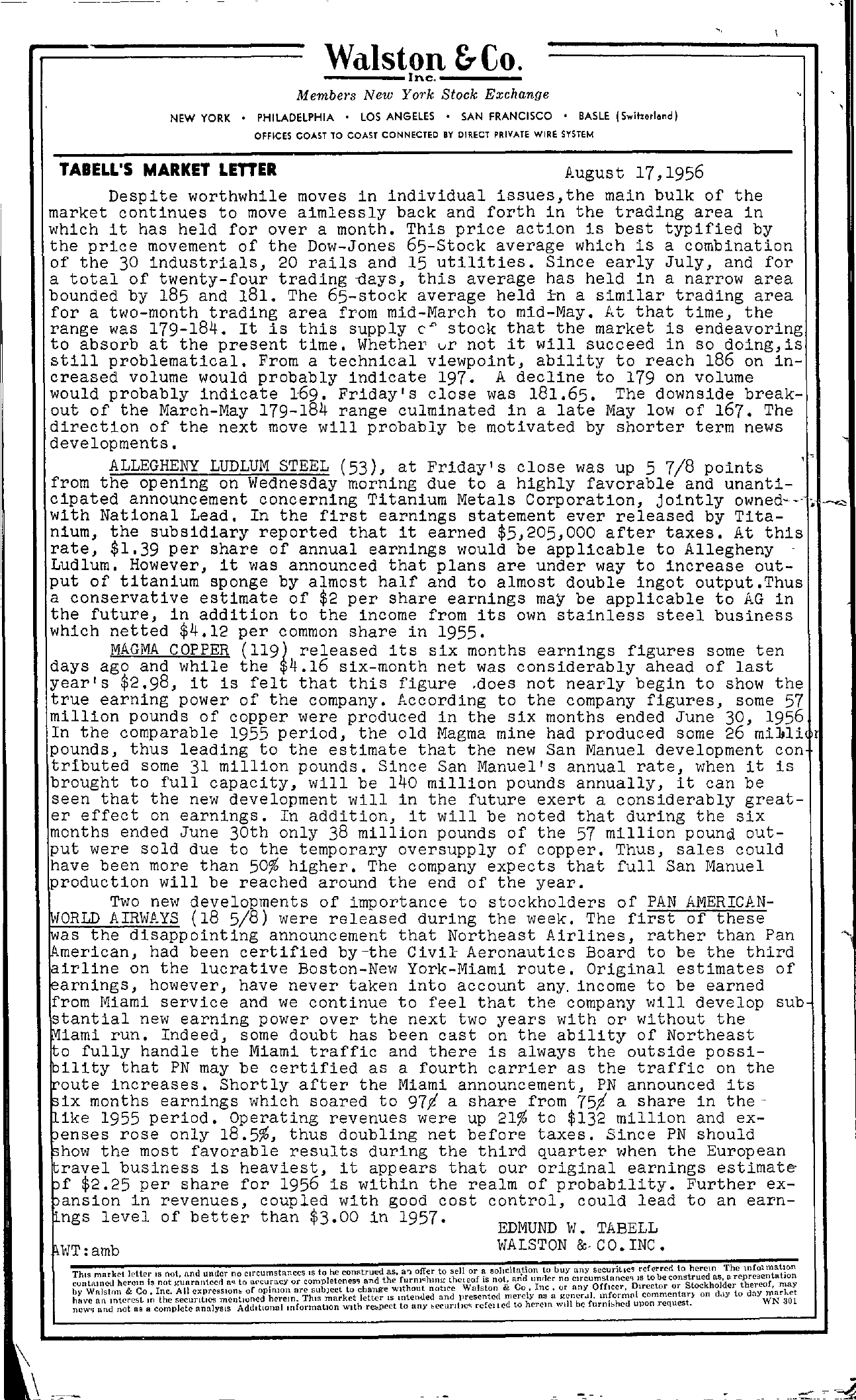 ,, Walston &Co. – – – – I n c . – Membe,'s New Y01'k Stock Exchange NEW YORK PHILADELPHIA LOS ANGELES SAN FRANCISCO BASLE ISw;t,Id I OFFICES COAST TO COAST CONNECTED BY DIRECT PRIVATE WIRE SYSTEM TABELL'S MARKET LEnER August 17,1956 Despite worthwhile moves in individual issues,the main bulk of the market continues to move aimlessly back and forth in the trading area in which it has held for over a month. This price action is best typified by the price movement of the Dow-Jones 65-Stock average which is a combination of the 30 industrials, 20 rails and 15 utilities. Since early July, and for a total of twenty-four trading -days, this average has held in a narrow area bounded by 185 and 181. The 65-stock average held in a similar trading area for a two-month trading area from mid-March to mid-May. At that time, the range was 179-184. It is this supply stock that the market is endeavoring to absorb at the present time. Whether ur not it will succeed in so dOing,is still problematical. From a technical viewpoint, ability to reach 186 on increased volume would probably indicate 197. A decline to 179 on volume would probably indicate 169. Friday's close was 181.65. The downside breakout of the March-May 179-184 range culminated in a late May low of 167. The direction of the next move will probably be motivated by shorter term news developments. ALLEGHENY LUDLUM STEEL (53), at Friday's close was up 5 7/8 pOints from the opening on Wednesday morning due to a highly favorable and unanti- cipated announcement concerning Titanium Metals Corporation, jOintly with National Lead. In the first earnings statement ever released by Tita- nium, the subsidiary reported that it earned 5,205,000 after taxes. At this rate, 1.39 per share of annual earnings would be applicable to Allegheny Ludlum. However, it was announced that plans are under way to increase out- put of titanium sponge by almost half and to almost double ingot output.Thus a conservative estimate of 2 per share earnings may be applicable to AG in the future, in addition to the income from its own stainless steel business which netted 4.12 per common share in 1955. MAGMA COPPER (119) released its six months earnings figures some ten days ago and while the 4.16 six-month net was considerably ahead of last year's 2.98, it is felt that this figure .does not nearly begin to show the true earning power of the company. According to the company figures, some 57 million pounds of copper were produced in the six months ended June 30, 1956 In the comparable 1955 period, the old Magma mine had produced some 26 pounds, thus leading to the estimate that the new San Manuel development con tributed some 31 million pounds. Since San Manuel's annual rate, when it is brought to full capacity, will be 140 million pounds annually, it can be seen that the new development will in the future exert a considerably great- er effect on earnings. In addition, it will be noted that during the six months ended June 30th only 38 million pounds of the 57 million poung out- put were sold due to the temporary oversupply of copper. Thus, sales could have been more than 50 higher. The company expects that full San Manuel production will be reached around the end of the year. Two new developments of importance to stockholders of PAN AMERICP.N- WORLD AIRWAYS (18 5/8) were released during the week. The first of these was the disappointing announcement that Northeast Airlines, rather than Pan American, had been certified by-the Civil Aeronautics Board to be the third airline on the lucrative Boston-New York-Miami route. Original estimates of however, have never taken into account any, income to be earned from liiami service and we continue to feel that the company develop sub- stantial new earning power over the next two years with or without the Miami run. Indeed, some doubt has been cast on the ability of Northeast to fully handle the Miami traffic and there is always the outside possi- bility that PN may be certified as a fourth carrier as the traffic on the route increases. Shortly after the Miami announcement, PN announced its six months earnings which soared to 971 a share from 751 a share in the- 1955 period. Operating revenues were up 21 to 132 million and ex- genses rose only 18.5, thus doubling net before taxes. Since PN should the most favorable results during the third quarter when the European bUSiness is heaviest, it appears that our original earnings estimate Jf 2.25 per share for 1956 is within the realm of probability. Further ex- Jansion in revenues, coupled with good cost control, could lead to an earn- ings level of better than 3.00 in 1957. EDMUND vi. TABELL ,WTamb WALSTON &CO.INC. This market letter IS not nnd under no circumstances IS to he con!\trued as, aT offer to sell or a solicitation to buy any referred to herein The lnfol Allherelll is nut Jf,'unrantccr3 Il to !1ccuracy or and the thctcof is not. Rcrid ujTIfler no C1TcuomNlInce,;S Lotbl' h Walstoll & Co Inc of opinlOll are subject to ehallge Without nutlce ,,'alston & 0, ne, or lIny lcer, Irec or or an mtercst s(!Cunlli.'S menllOned herem. ThiS market letter IS mtended and llresenlcd merely as a J.cner.ll, mformlll WN'arket on d.IY to daY 301 and not us a complete aml.lysis AdditIOnal mformatlOl\ With rCl;.pect to any b(!CurllJC; refel I,d to h'reln Will be furnllhc-d upon reques .