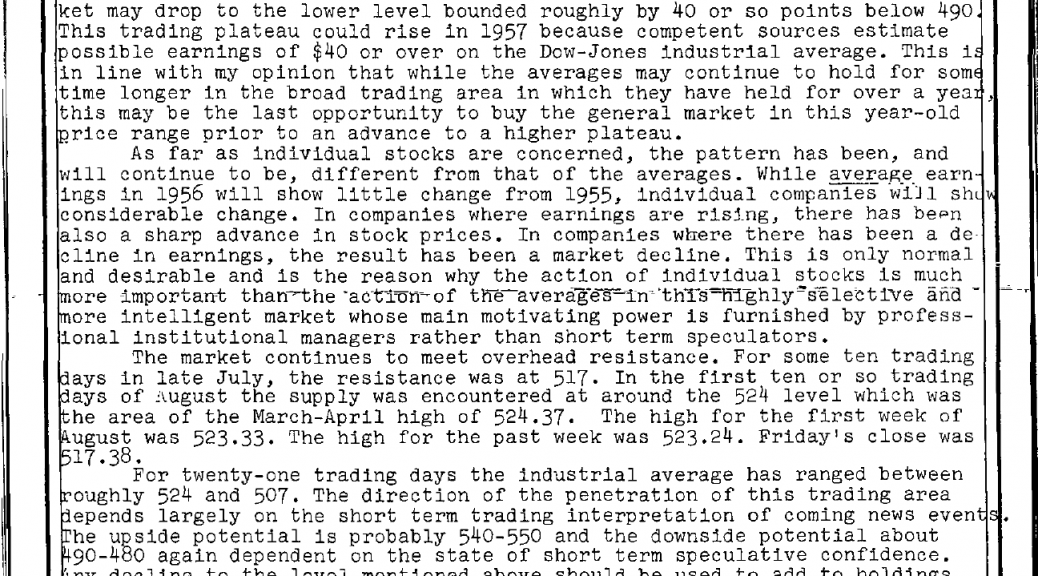 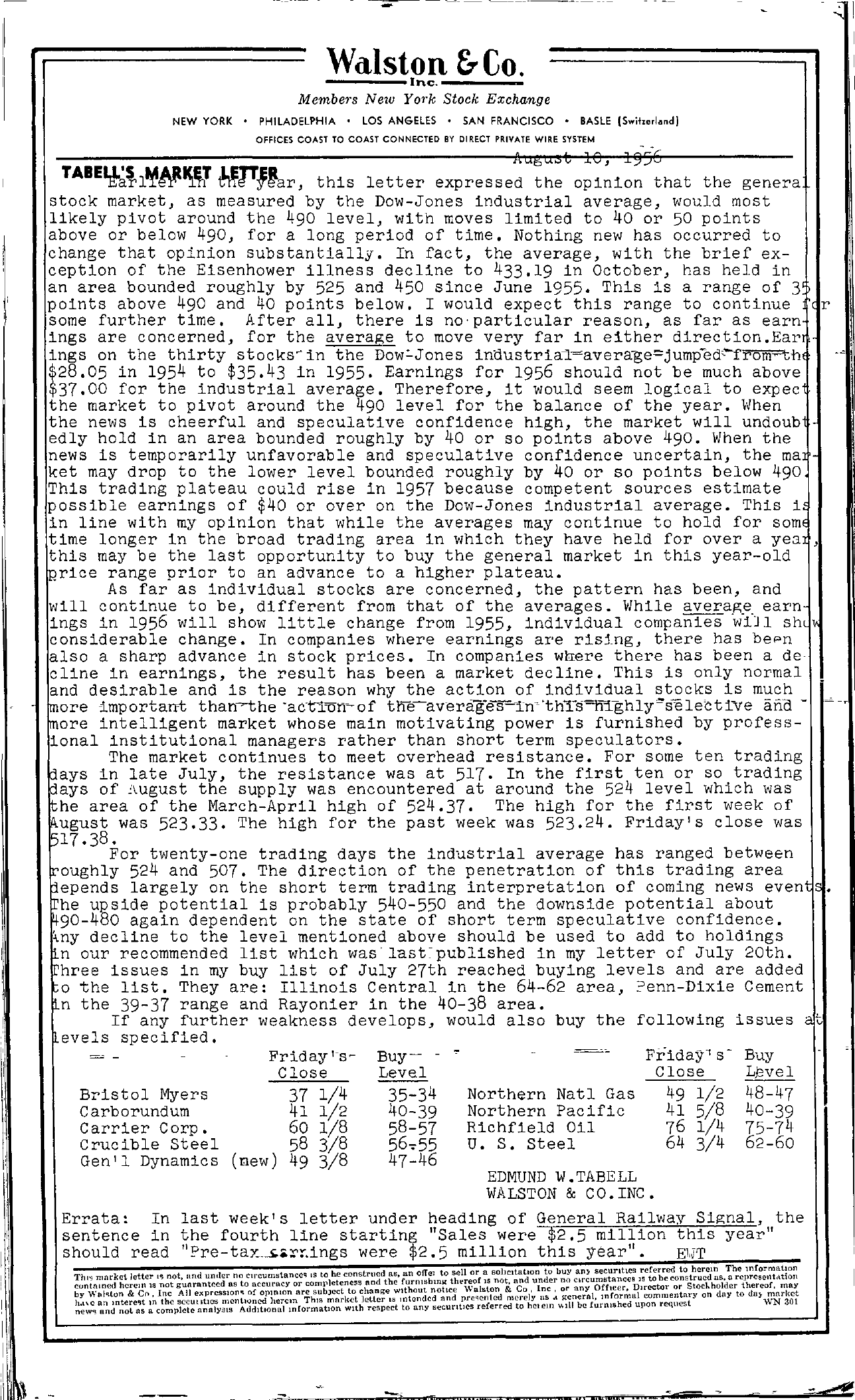 — – – – – – Wdlston &- Co. Inc. M embm's New YOj'k Stock EXchange NEW YORK PHILADELPHIA LOS ANGELES SAN FRANCISCO BASLE (SwH,laod) OFFICES COAST TO COAST CONNECTED BY DIRECT PRIVATE WIRE SYSTEM this letter expressed the opinion that the genera stock market, as measured by the Dow-Jones industrial average, would most likely pivot around the 490 level, with moves limited to 40 or 50 points above or below 490, for a long period of time. Nothing new has occurred to change that opinion substantially. In fact, the average, with the brief exception of the Eisenhower illness decline to 433.19 in October, has held in an area bounded roughly by 525 and 450 since June 1955. This is a range of 3 points above 490 and 40 points below. I would expect this range to continue r some further time. After all, there is no'particular reason, as far as earn ings are concerned, for the average to move very far in either direction.Ear ings on the thirty stocks-in the Dow'Jones industria1-avera-gejump-ed'-fromth 28.05 in 1954 to 35.43 in 1955. Earnings for 1956 should not be much above 37.00 for the industrial average. Therefore, it would seem logical to expec the market to pivot around the 490 level for the balance of the year. When the news is cheerful and speculative confidence high, the market will undoub edly hold in an area bounded roughly by 40 or so pOints above 490. When the news is temporarily unfavorable and speculative confidence uncertain, the rna ket may drop to the lower level bounded roughly by 40 or so points below 490 This trading plateau could rise in 1957 because competent sources estimate possible earnings of 40 or over on the Dow-Jones industrial average. This i in line with my opinion that while the averages may continue to hold for som time longer in the broad trading area in which they have held for over a yea , this may be the last opportunity to buy the general market in this year-old Rrice range prior to an advance to a higher plateau. As far as individual stocks are concerned, the pattern has been, and will continue to be, different from that of the averages. While aveJage earnings in 1956 will show little change from 1955, individual companies wiJl shl considerable change. In companies where earnings are rislng, there has bepn also a sharp advance in stock prices. In companies wHere there has been a de- cline in earnings, the result has been a market decline. This is only normal and desirable and is the reason why the action of individual stocks is much – more important than-,-the tne-averag-es-Tn-thTsnighlyselective ana – – more intelligent market whose main motivating power is furnished by profess- ional institutional managers rather than short term speCUlators. The market continues to meet overhead resistance. For some ten trading in late July, the resistance was at 517. In the first ten or so trading pays of ccugust the supply was encountered at around the 524 level which was area of the March-April high of 524.37. The high for the first week of was 523.33. The high for the past week was 523.24. Friday's close was For twenty-one trading days the industrial average has ranged between roughly 524 and 507. The direction of the penetration of this trading area jepends largely on the short term trading interpretation of coming news event upside potential is probably 540-550 and the downside potential about again dependent on the state of short term speculative confidence. decline to the level mentioned above should be used to add to holdings In our recommended list which was'lastpublished in my letter of July 20th. rhree issues in my buy list of July 27th reached buying levels and are added o the list. They are Illinois Central in the 64-62 area, enn-Dixie Cement the 39-37 range and Rayonier in the 40-38 area. If any further weakness develops, would also buy the following issues a' Levels specified. — – Friday'-s- Buy- – – Close Level – — Friday's- Buy Close LJ2vel Bristol Myers 37 1/4 35-34 Northern Natl Gas 49 1/2 48-47 Carborundum 41 1/2 40-39 Northern Pacific 41 5/8 40-39 Carrier Corp. Crucible Steel 60 1/8 58 3/8 58-57 Richfield Oil u. S. Steel 76 1/4 75-74 64 3/4 62-60 I Gen'l Dynamics (new) 49 3/8 47-46 I EDMUND W.TABELL WALSTON & CO. INC Ii Errata In last week's letter under heading of General Railway Signal, the I, sentence in the fourth line starting Sales were 2.5 million this year I should read ..;rr.ings were 2.5 million this year. E1,rr he rl IT t II or a salleltatIon to buy an securlhes referred to herem The mformatlOn lnfThl'l market letter 1; not, lind un tier no circumstancc'l IS tOI t;s, 0 contamed herem IS not guarnnteed as to accuracy or etencssn c 0 tst'\r\e-'oaflsIStonnot&. nnd Co under Inc no or Circumstances IS to be construed as. n representation any Ofhcer, Dlrcctor or Stockholder thereof. may I, by ';lti'ton & en, Inc All expressIOn, of opinIOn Jeetktot WI t merely liS J(eneral, mformul cummentary on (illY to dll f!1urkct securltlcs referred to hel em \\111 be furlllshed upon request WN 301 II I! ,I, ',' II II. I'i'ii, ………1 .of , ' ill tlmill G