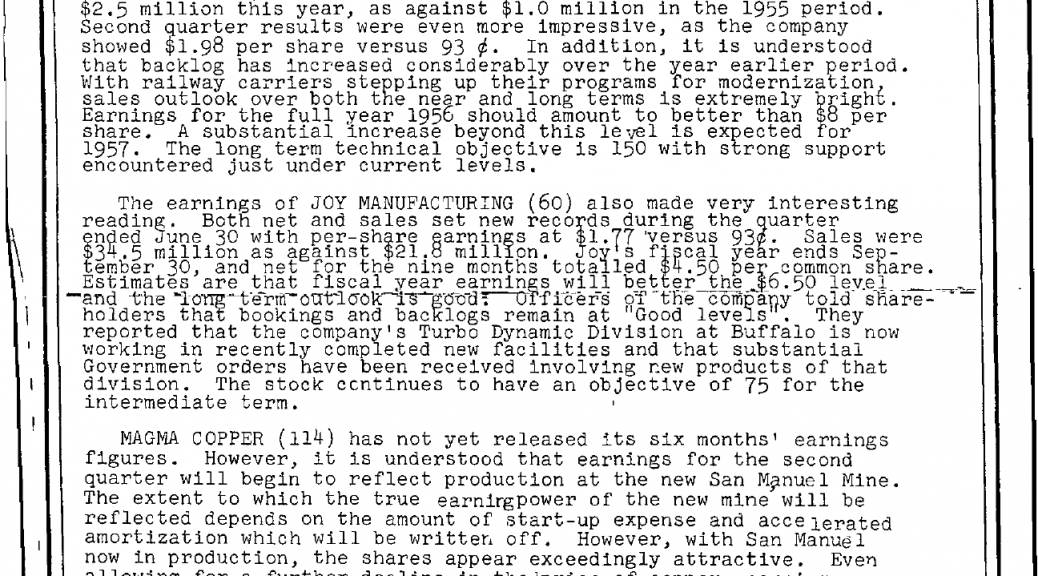 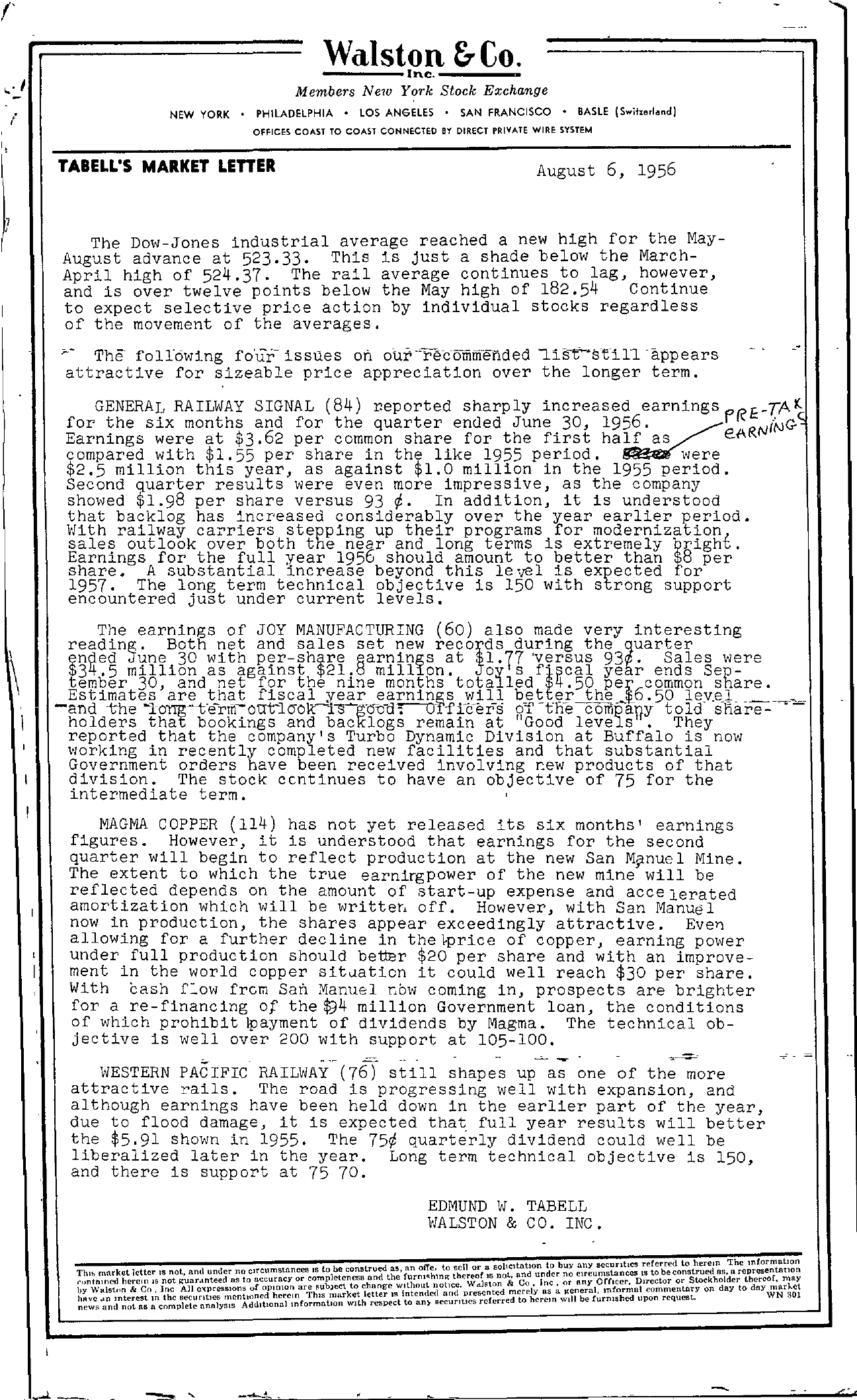 r Walston &Co, Inc. Members New York Stock Exchange f NEW YORK PHILADELPHIA' LOS ANGELES SAN FRANCISCO BASLE (SwH',I.nd) OFfiCES COAST TO COAST CONNECTED BY DIRECT PRIVATE WIRE SYSTEM TABELL'S MARKET LETTER August 6, 1956 ,1 The Dow-Jones industrial average reached a new high for the MayAugust advance at 523.33. This is just a shade below the MarchApril high of 524.37. The rail average continues to lag, however, and is over twelve pOints below the May high of 182.54 Continue to expect selective price action by individual stocks regardless of the movement of the averages. The folrowing fo'ur- issUes on our–re-comrrfended l.is-t…. stillappears attractive for sizeable price appreciation over the longer term. . GENERAL RAILWAY SIGNAL (84) neported sharply increased earnings for the six months and for the quarter ended June 30, Earnings were at 3.62 per common share for the first half as eA RNiNG- compared with 1.55 per share in the like 1955 period. were 2.5 million this year, as against 1.0 million in the 1955 period. Second quarter results were even more impressive, as the company showed 1.98 per share versus 93 . In addition, it is understood that backlog has increased considerably over the year earlier period. With railway carriers stepping up their programs for modernization/ sales outlook over both the near and long terms is extremely Irigh0. Earnings for the full year 1956 should amount to better than 8 per share. A substantial increase beyond this is expected or 1957. The long term technical objective is 150 with strong support encountered just under current levels. The earnings of JOY MANUFACTURING (60) also made very interesting reading. Both net and sales set new reCO!dS during the quarter ended June 30 with arnings at 1.17 versus 93. Sales were 34.5 million as against millIon. oy s fiscal year ends Sep- Etesmtibmerate3s0, aarend thnaett ffoisrcathleyneianre emaronnitnhgs s towtiallllebdetter theperti6c.o5m0mloenv.sehl are. -and t'he oT -tfie company told' snare- holders that bookings and remain at Good levels'. They reported that the company's Turbo Dynamic Division at Buffalo is now working in recently completed new facilities and that substantial Government orders have been received involving products of that division. The stock ccntinues to have an objective of 75 for the intermediate term. ' MAGMA COPPER (114) has not yet released its six months' earnings figures. However, it is understood that earnings for the second quarter will begin to reflect production at the new San Mnuel Mine. The extent to which the true earnirgpower of the new mine will be reflected depends on the amount of start-up expense and accelerated amortization which will be writter, off. However, with San Manuel now in production, the shares appear exceedingly attractive. allowing for a further decline in of copper, earning power under full production should better 20 per share and with an improve- ment in the world copper it could well reach 30 per share. With bash row frem San Manuel Gbw coming in, prospects are brighter for a re-financing of million Government loan, the conditions of which prohibit of dividends by Magma. The technical ob- jective is well over 200 with support at 105-100. WESTERN PACIFIC RAILWAY (76) still up–a; one of the more attractive rails. The road is progressing well with expansion, and although earnings have been held down in the earlier part of the year, due to flood damage, it is expected that full year results will better the 5.91 shown in 1955. The 75 quarterly dividend could well be liberalized later in the year. Long term technical objective is 150, and there is support at 75 70. EDMUND W. TABELL WALSTON & CO. INC. ed IT t II r 11 soliCitation to buy any sccunhcs referred to herein The information Thlh market letter IS not, and under no CITcumstnnce! IS to be constl'u as, an 0 e, 0 Be 0 untaltled herCln IS not lIunr.lllteed liS to nc!urncy or completeness nd thc n 0&t . and Co under Inc no or CIrcumstances IS to be construed as, a representation any OffIcer Director or Stockholder thereof, may by V.'llistnn & Co, lnc All C'I(presslOns of Opinion merely as commentary on day to day hAve ,.n mterest news and not as m the a com SecUritIes plete nnaly mentlllnded her sls Ad Itlonu , ,,n In , or , ma mar Ion e WI th , 'prelet \0 an'- securities referred to herem Will be furnIshed upon request.