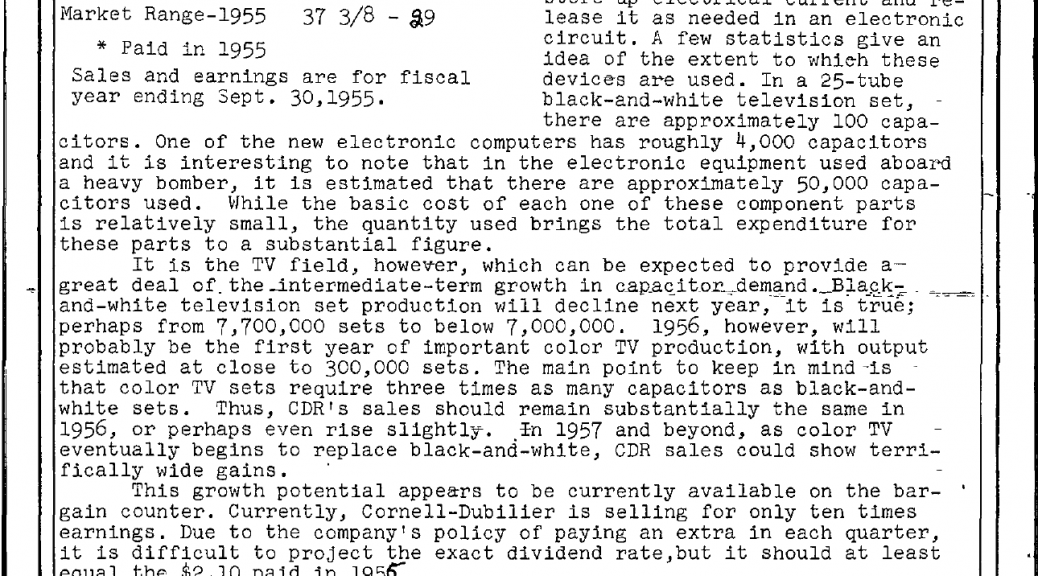 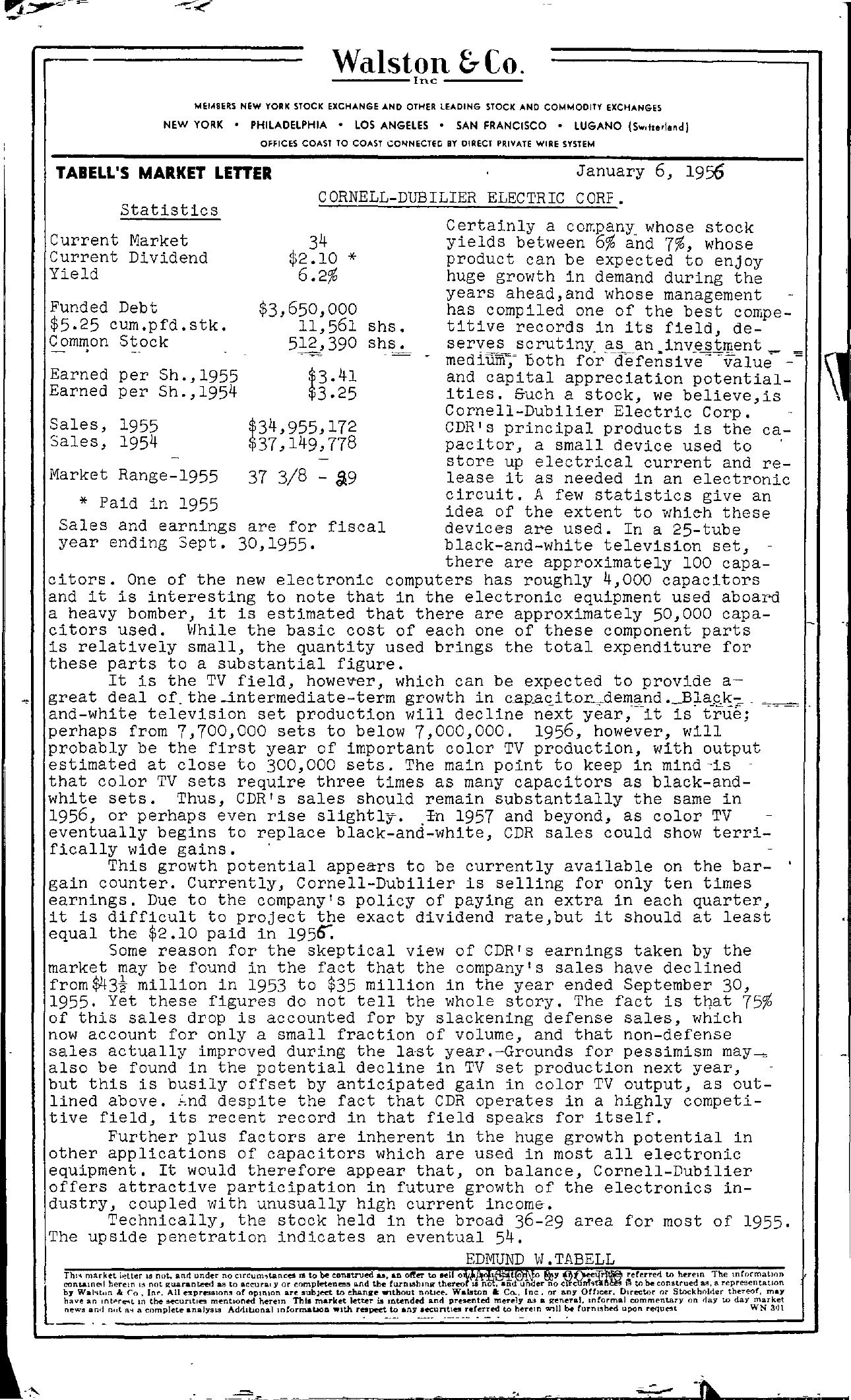 Walston &- Co. Inc MEMBERS NEw YORI( STOCK EXCHANGE AND OTHER LEADING STOCK AND COMMODITY EXCHANGES NEW YORK PHILADELPHIA LOS ANGELES SAN FRANCISCO LUGANO (Sw,hId I OffiCES COAST TO COAST COlNECreC BY DIRECT PRIVATE WIRE SYSTEM TABEll'S MARKET lETTER January 6, 1956 Statistics CORNELL-DUBILIER ELECTRIC CORF. Current Market Current Dividend Yield 34 2.10 6.2 Certainly a corr.pany whose stock yields between 6 and 7, whose product can be expected to enjoy huge growth in demand during the Funded Debt 5.25 cum.pfd.stk. Common Stock Earned per Sh.,1955 Earned per Sh.,1954 3,650,000 11,561 shs. 512,390 sh-s. 3.41 3.25 years ahead, and whose management has compiled one of the best competitive records in its field, deserves scrutiny as an investment medium Doth for–defensive -valu;- – and capital appreciation potentialities. &uch a stock, we believe, is Sales, 1955 Sales, 1954 34,955,172 37, 149,778 Cornell-Dubilier Electric Corp. CDR's principal products is the capacitor, a small device used to ' Market Range-1955 37 3/8 – 9 store up electrical current and release it as needed in an electronic Paid in 1955 Sales and earnings are for fiscal year ending Sept. 30,1955. circuit. A few statistics give an idea of the extent to which these devices are used. In a 25-tube black-and-white television set, there are approximately 100 capa- citors. One of the new electronic computers has roughly 4,000 capacitors and it is interesting to note that in the electronic equipment used aboard a heavy bomber, it is estimated that there are approximately 50,000 capa- citors used. While the basic cost of each one of these component parts is relatively small, the quantity used brings the total expenditure for these parts to a substantial figure. It is the TV field, howeer, which can be expected to provide a- great deal of. the ..intermediate-term growth in capac.i tordemi'l.nd .Blak.;.. and-white television set production will decline next year, t is tru; perhaps from 7,700,000 sets to below 7,000,000. 1956, however, will probably be the first year of important color TV production, with output estimated at close to 300,000 sets. The main point to keep in mind-is that color TV sets require three times as many capacitors as black-and- white sets. Thus, CDR's sales should remain substantially the same in 1956, or perhaps even rise slightly. ,In 1957 and beyond, as color TV eventually begins to replace black-and-white, CDR sales could show terri- fically wide gains. ' This growth potential appefrrs to be currently available on the bar- gain counter. Currently, Cornell-Dubilier is selling for only ten times earnings. Due to the company's policy of paying an extra in each quarter, it is difficult to project the exact dividend rate,but it should at least equal the 2.10 paid in 195 Some reason for the skeptical view of CDR's earnings taken by the market may be found in the fact that the company's sales have declined from3t million in 1953 to 35 million in the year ended September 30, 1955. Yet these figures do not tell the whole story. The fact is tqat 75 of this sales drop is accounted for by slackening defense sales, which now account for only a small fraction of volume, and that non-defense sales actually improved during the last year.-Grounds for pessimism may also be found in the potential decline in TV set production next year, but this is busily offset by anticipated gain in color TV output, as out- lined above. hnd despite the fact that CDR operates in a highly competi- tive field, its recent record in that field speaks for itself. Further plus factors are inherent in the huge growth potential in other applications of capacitors which are used in most all electronic equipment. It would therefore appear that, on balance, Cornell-Dubilier offers attractive participation in future growth of the electronics in- dustry, coupled with unusually high current income. Technically, the stock held in the broad 36-29 area for most of 1955. The upside penetration indicates an eventual 54. nThmk'tlt,,,,,,,,cc.Trtd.,o7.,,um',,,oon,uuu,,oWOEDMUN\'';!RBEi,L-,,r,-,,-,rtwha-,-onTh'-'-'ro'mat'o l .conUlne.1 herein Ll\ by W.I'itun &. Co, not lor. gAulalreanptreeesrlll\aO.sntooareoepuIrnaI,oyn aarreeomupbfJeenclt'!!t!loJ!!chaannd2tehwe tttubronulSt hnlontlfIcteh.erWa'll1lStonntt.6.; andu'flller'1i'o Co.., Inc, or e'iell!JfrlI any Otfuf!r, to M construed all, a representation Director or Srockholrler thereor, may halre an Int..re-\t In the e'(urltl mentioned Tem Thill muket if!lter is Intended and presented merely u a p;eneral. Informal commentary on lay to day market new and nt I\ a complete analyn'! Ad,huonal Inrormauon 'nth rHpeet to any auntle'-!L -r-e f-e r r e d- to herem Wlll . be furnl!!Lhed upon request WN 31)t 1\ -.