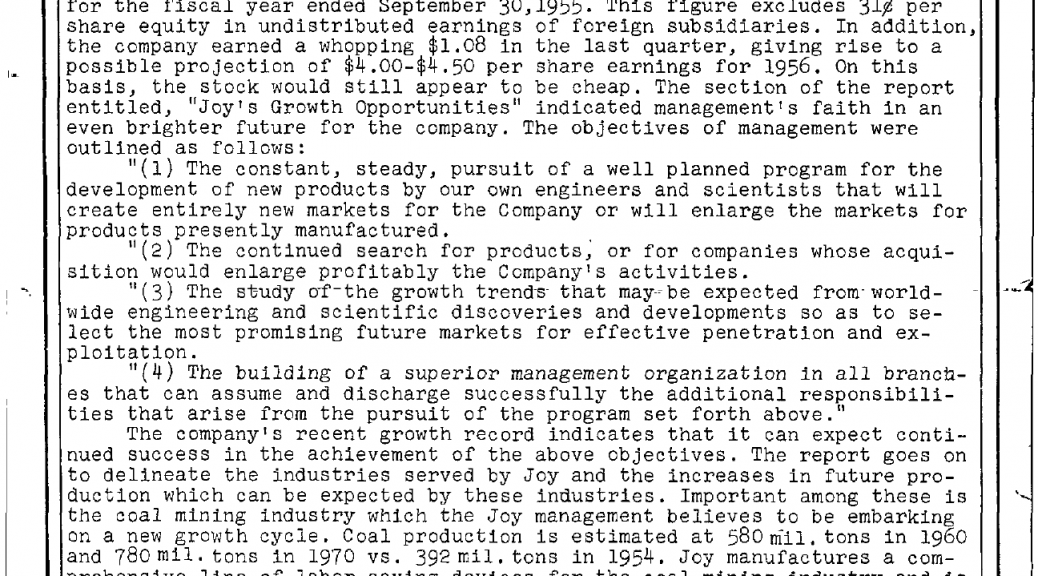 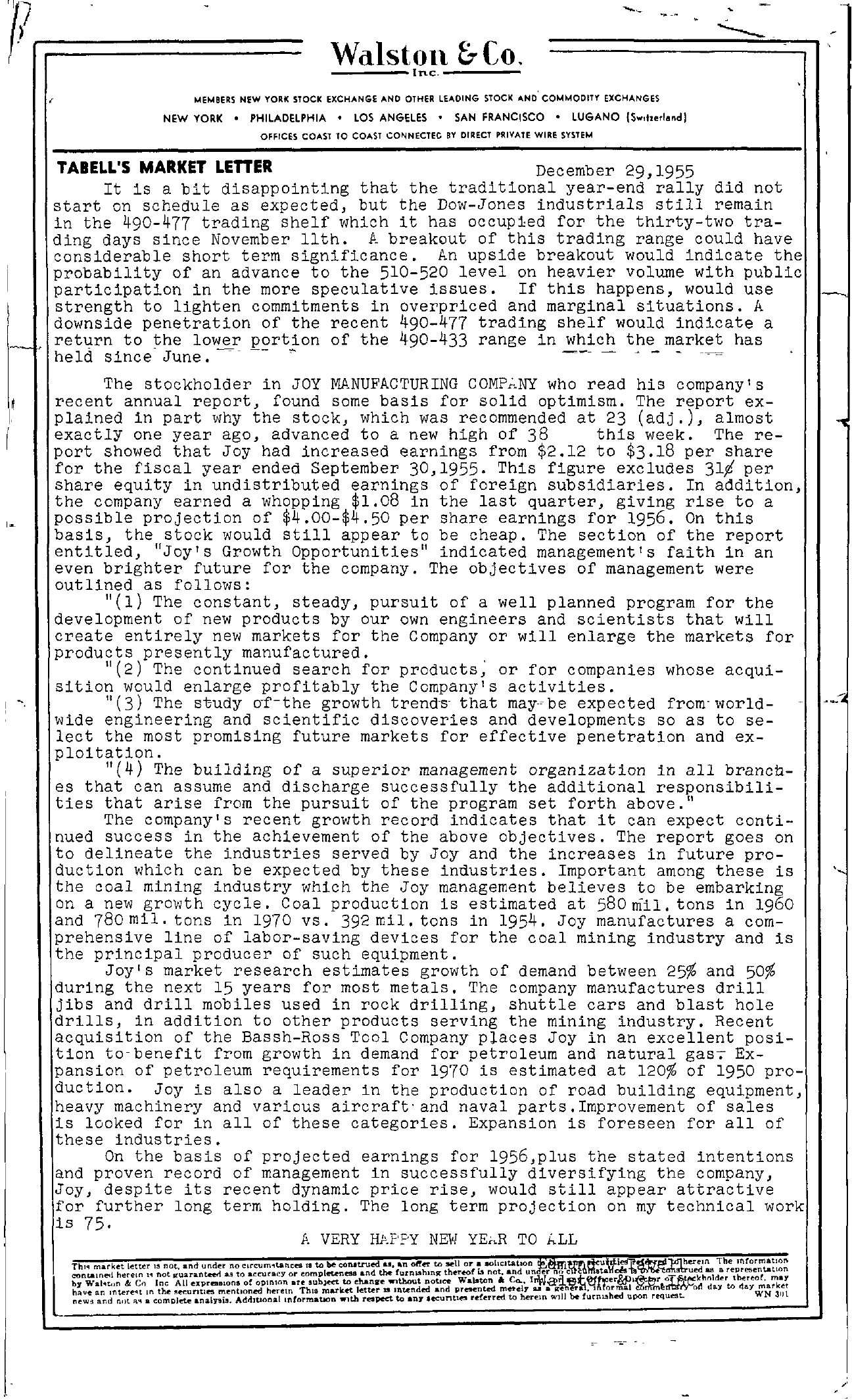 /7 i r. Walston &Co. —-Inc.—- — —. MEMBERS NEW YORK STOCK EXCHANGE … NO OTHER LEADING STOCI( AND COMMODITY EXCHANGES NEW YORK PHILADELPHIA LOS ANGELES SAN FRANCISCO LUGANO Sw,,,.d..dJ OFFICES COAST TO COAST BY OIRECT PRIVATE WIRE SYSTEIo4 TAB ELL'S MARKET LEnER December 29,1955 It is a bit disappointing that the traditional year-end rally did not start on schedule as expected, but the Dow-Jones industrials still remain in the 490-477 trading shelf which it has occupied for the thirty-two tra- ding days since November 11th. A breakout of this trading range could have considerable short term significance. An upside breakout would indicate the probability of an advance to the 510-520 level on heavier volume with public participation in the more speculative issues. If this happens, would use strength to lighten commitments in overpriced and marginal situations. A downSide penetration of the recent 490-477 trading shelf would indicate a rheetludrnsintoce'thJeunleo.wer- -p-ortion of the 490-433 range in -w-h-ich the m-arket has The stockholder in JOY !'flANUFACTURING COMP;,NY who read his company's I' recent annual report, found some basis for solid optimism. The report explained in part why the stock, which was recommended at 23 (adj.), almost I exactly one year ago, advanced to a new high of 38 this week. The re- port showed that Joy had increased earnings from 2.12 to 3.18 per share ., for the fiscal year ended September 30,1955. This figure excludes 31t per share equity in undistributed earnings of foreign subsidiaries. In addition, the company earned a whopping 1.08 in the last quarter, giving rise to a possible projection of 4.00-4.50 per share earnings for 1956. On this baSiS, the stock would still appear to be cheap. The section of the report entitled, Joy's Growth Opportunities indicated management's faith in an even brighter future for the company. The objectives of management were outlined as follows (1) The constant, steady, pursuit of a well planned program for the development of new products by our own engineers and scientists that will create entirely new markets for the Company or will enlarge the markets for products presently manufactured. (2) The continued search for products; or for companies whose acqui- sition would enlarge profitably the Company's activities. (3) The study o-f-the growth trends that may-obe expected from'world- . ..i wide engineering and scientific discoveries and developments so as to se- lect the most promising future markets for effective penetration and ex- ploitation. ( 4) T'he building of a superior management organization in all branch- es that can assume and discharge successfully the additional responsibili- ties that arise from the pursuit of the program set forth above. The company's recent growth record indicates that it can expect conti- nued success in the achievement of the above objectives. The report goes on to delineate the industries served by Joy and the increases in future pro- duction which can be expected by these industries. Important among these is the coal mining industry which the Joy management believes to be embarking on a new growth cycle. Coal production is estimated at 580ni'il. tons in 1960 and 780 mil. tons in 1970 vs. 392 mil. tons in 1954. Joy manufactures a com- prehensive line of labor-saving devices for the coal mining industry and is the principal producer of such equipment. Joy's market research estimates growth of demand between 25 and 50 during the next 15 years for most metals. The company manufactures drill jibs and drill mobiles used in rock drilling, shuttle cars and blast hole drills, in addition to other products serving the mining industry. Recent acquisition of the Bassh-Ross Tool Company places Joy in an excellent posi- tion to-benefit from growth in demand for petroleum and natural Ex- pansion of petroleum requirements for 1970 is estimated at 120 of 1950 pro- duction. Joy is also a leader in the production of road building eqUipment, heavy machinery and various aircraft'and naval parts.Improvement of sales is looked for in all of these categories. Expansion is foreseen for all of these industries. On the basiS of projected earnings for 1956,plus the stated intentions and proven record of management in successfully diversifying the company, Joy, despite its recent dynamic price rise, would still appear attractive for further long term holding. The long term projection on my technical work is 75.