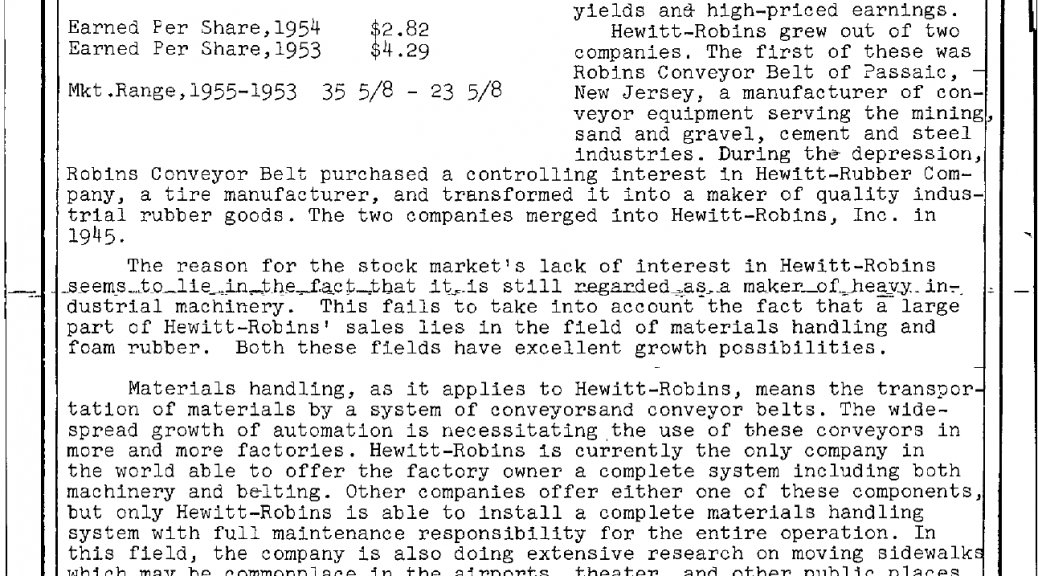 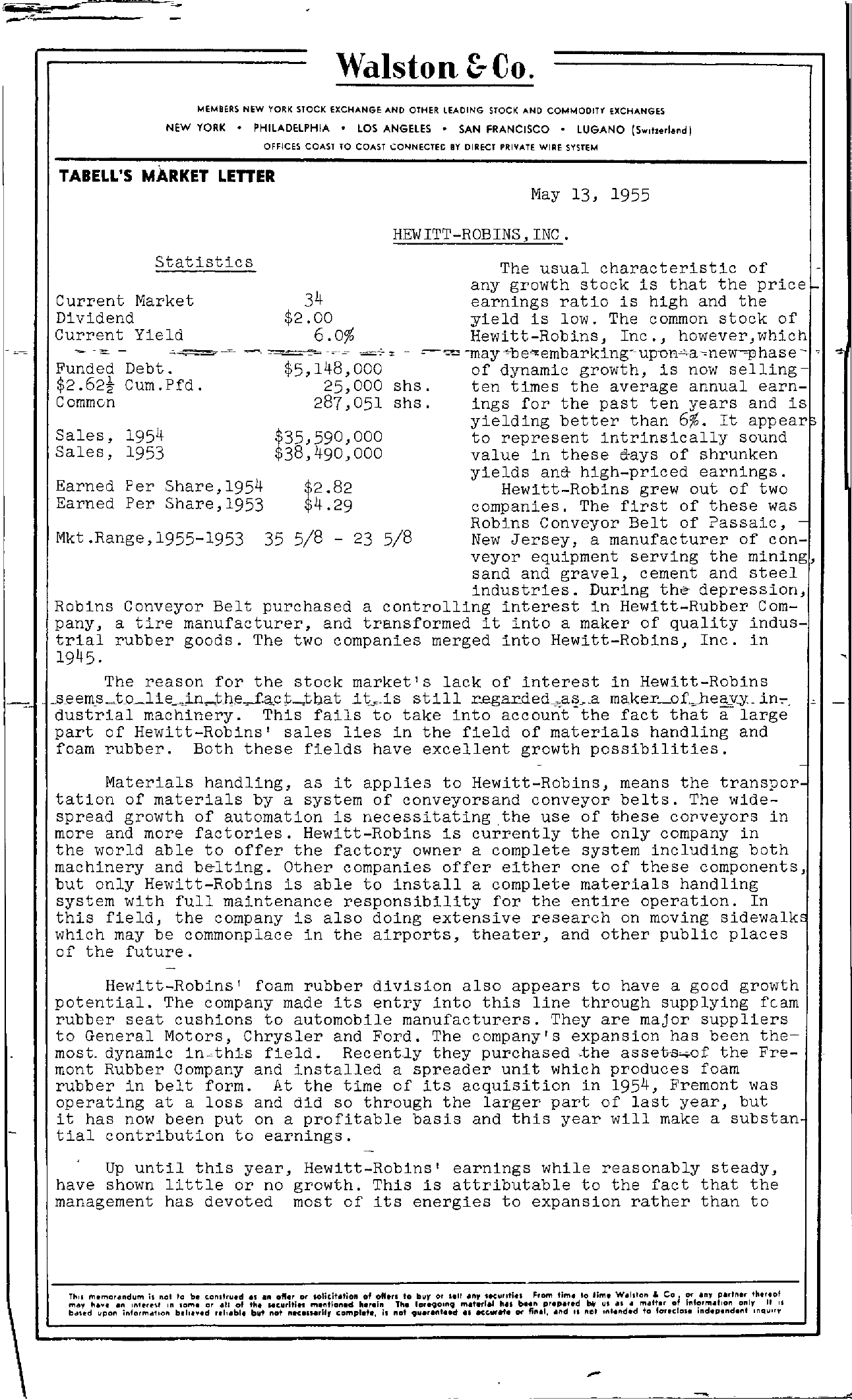 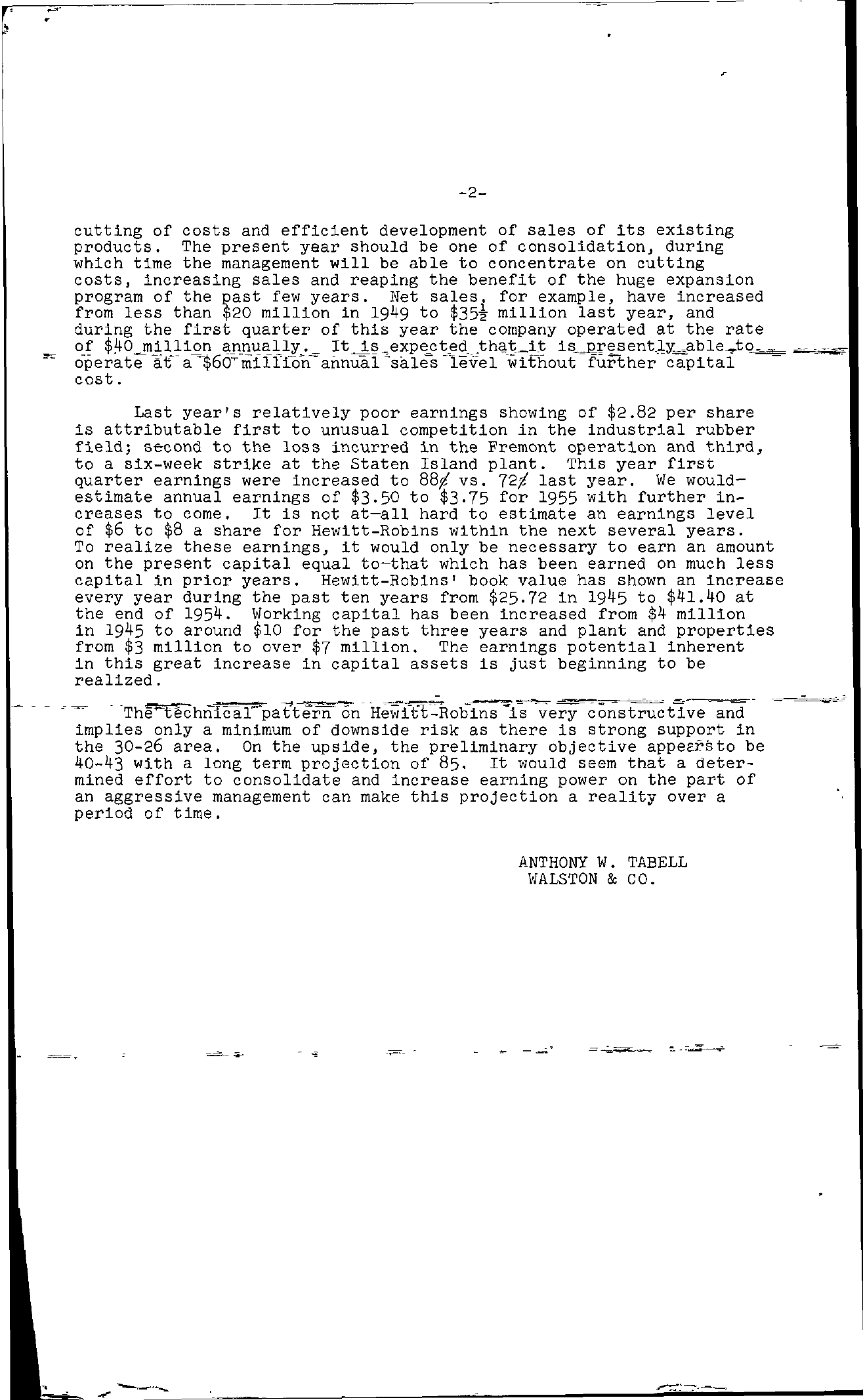 Walston &- Co. t.IEMBERS NEW YORK STOCI( eXCHANGE AND OTHER LEADING STOCK AND COMMODITY EXCHANGES NEW YORK PHILADelPHIA LOS ANGELES SAN FRANCISCO LUGANO Sw,h.d.,d I OFFICES COAST TO COAST BY DIRECT PRIVATE WIRE SYSTEM TABELL'S MARKET LEnER May 13, 1955 HE\JITT-ROBINS, INC. Statistics The usual characteristic of – any growth stock is that the pricer Current Market 34 earnings ratio is high and the Dividend 2.00 yield is low. The common stock of Cu–r- rent Yield 6.0 C', – Hewitt-Robins, Inc., however,which – ..- Funded 2.62t Debt. Cum.Pfd. 5,148,000 25,000 shs. of dynamic growth, is now sellingten times the average annual earn- Common 287,051 shs. ings for the past ten years and is yielding better than 6. It Sales, 1954 Sales, 1953 35,590,000 38,490,000 to represent intrinsically sound value in these &ays of shrunken yields anfr high-priced earnings. Earned Per Share,1954 2.82 Hewitt-Robins grew out of two Earned Per Share,1953 4.29 companies. The first of these was Robins Conveyor Belt of assaic, – Mkt.Range,1955-1953 35 5/8 – 23 5/8 New Jersey, a manufacturer of con- veyor equipment serving the mining, sand and gravel, cement and steel industries. During the depression, Robins Conveyor Belt purchased a controlling interest in Hewitt-Rubber Com- pany, a tire manufacturer, and transformed it into a maker of quality indus- trial rubber goods. The two companies merged into Hewitt-Robins, Inc. in 1945. The reason for the stock market's lack of interest in Hewitt-Robins -leemso.ctolie .ito.is still dustrial machinery. This fails to take into a fact that a in–. large part of Hewitt-Robins' sales lies in the field of materials handling and foam rubber. Both these fields have excellent growth possibilities. – Materials handling, as it applies to Hewitt-Robins, means the transpor- tation of materials by a system of conveyorsand conveyor belts. The wide- spread growth of automation is necessitating ,the use of these in more and more factories. Hewitt-Robins is currently the only company in the world able to offer the factory owner a complete system including both machinery and belting. Other companies offer either one of these components, but only Hewitt-Robins is able to install a complete materials handling system with full maintenance responsibility for the entire operation. In this field, the company is also dOing extensive research on moving sidewalk, which may be commonplace in the airports, theater, and other public places of the future. Hewitt-Robins' foam rubber division also appears to have a good growth potential. The company made its entry into this line through supplying feam rubber seat cushions to automobile manufacturers. They are major suppliers to General Motors, Chrysler and Ford. The company's expansion has been the- most. dynamic field. Recent.ly they purchased assets,-,-of the Fre- mont Rubber Oompany and installed a spreader unit which produces foam rubber in belt form. At the time of its acquisition in 1954, Fremont was operating at a loss and did so through the larger part of last year, but it has now been put on a profitable basis and this year will make a substan- tial contribution to earnings. Up until this year, Hewitt-Robins' earnings while reasonably steady, have shown little or no growth. This is attributable to the fact that the management has devoted most of its energies to expansion rather than to oft.nl 'tmor.ndum is nol to b, corulrUld II ,,. off.r or i01itit.tiofl of to bioi, or lin ,n, 'Kutle' From time 10 'ime W.ldon , Co, or tny p.,'n., th.ftof m..y …… ,n '' 'rut ,n 10 or ,II of 'h, Hcyrlli flolled h.r.ln 'M ',ltl1'lai II.. b.,,, prep,r,d bitt 101 I' m.ftu of l.. only II !I.ned lipan info,m!lt,o b.hued Itbl. bllt not nec.IMrU, cOl'llpl.t., is not qUlrlnt.,d .1 ecc.'''' Ot' fin,l, nd II not ,nl,nded to for'clOIe ,ndep,nd,nt InqllV – r -2- cutting of costs and efficient development of sales of its existing products. The present year should be one of consolidation, during which time the management will be able to concentrate on cutting costs, increasing sales and reaping the benefit of the huge expansion program of the few years. Net sales. for example, have increased from less than million in 1949 to 35t million last year, and during the first quarter of this year the company operated at the rate oofperifaOtemaitl-lion apnually. expected .tMtit armual -level wiUiout further capital – cost. Last year's relatively poor earnings showing of 2.82 per share is attributable first to unusual competition in the industrial rubber field; second to the loss incurred in the Fremont operation and third, to a six-week strike at the Staten Island plant. This year first quarter earnings were increased to 881 vs. 721 last year. We would- estimate annual earnings of 3.50 to 3.75 for 1955 with further in- creases to come. It is not at-all hard to estimate an earnings level of 6 to 8 a share for Hewitt-Robins within the next several years. To realize these earnings, it would only be necessary to earn an amount on the present capital equal to-that which has been earned on much less capital in prior years. Hewitt-Robins' book value has shown an increase every year during the past ten years from 25.72 in 1945 to 41.40 at the end of 1954. Working capital has been increased from 4 million in 1945 to around 10 for the past three years and plant and properties from 3 million to over 7 million. The earnings potential inherent in this great increase in capital assets is just beginning to be realized. -1s The-tchnicar-panern on HewiURob-ins -very and implies only a minimum of downside risk as there is strong support in the 30-26 area. On the upside, the preliminary objective appeersto be 40-43 with a long term projection of 85. It would seem that a deter- mined effort to consolidate and increase earning power on the part of an aggressive management can make this projection a reality over a period of time. ANTHONY W. TABELL IALSTON & CO.