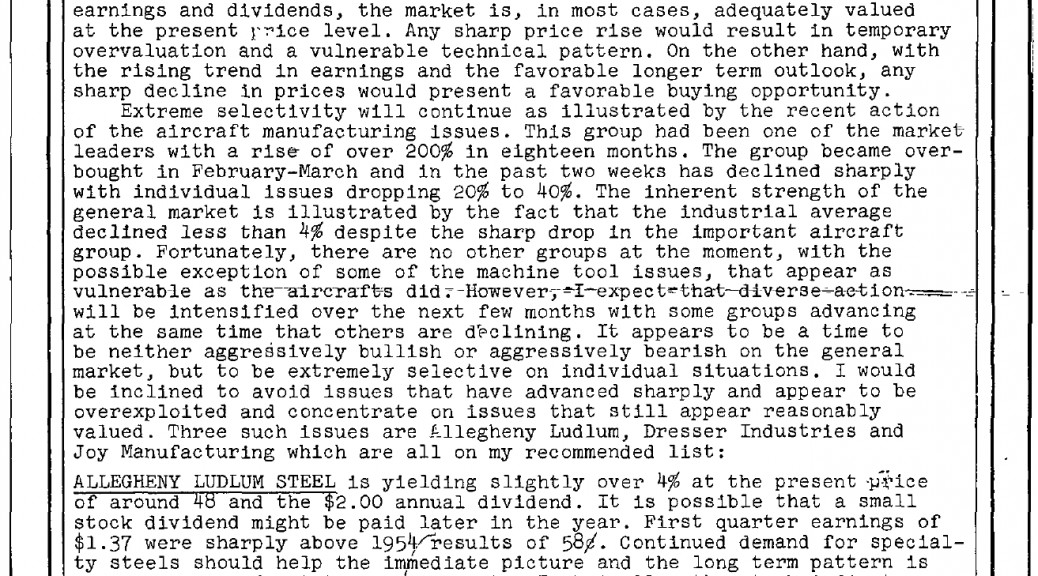 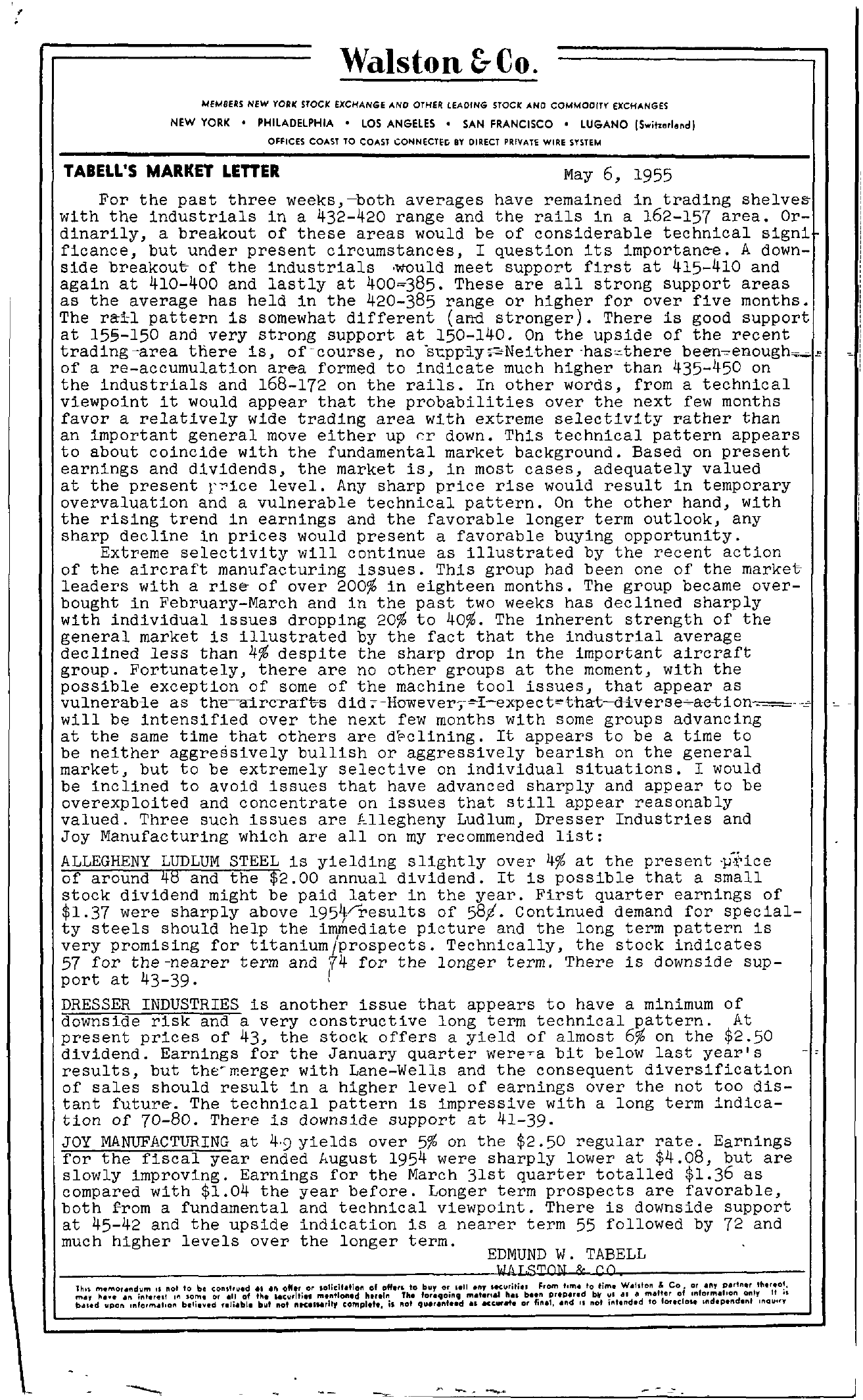 Walston &- Co. MEMBERS NEW VORl( STOCK EXCHANGE AND OTHER LEAOING STOCI( AND COMMODITY EXCHANGES NEW YORK PHILADELPHIA LOS ANGELES SAN FRANCISCO LUGANO ISwit,lend I OFFICES COAST TO COAST CO'lNECHi BY DIRECT PRIVATE WIRE SYSTEM TABEll'S MARKET LETTER May 6, 1955 For the past three weeks,-both averages have remained in trading shelves with the industrials in a 432-420 range and the rails in a 162-157 area. Or- dinarily, a breakout of these areas would be of considerable technical signi ficance, but under present circumstances, I question its importanee. A down- side of the industrials would meet support first at 415-410 and again at 410-400 and lastly at 400385. These are all strong support areas as the average has held in the 420-385 range or higher for over five months. The rail pattern is somewhat different (and stronger). There is good support at 155-150 and very strong support at 150-140. On the upside of the recent trading -area there is, of no -has,there of a re-accumulation area formed to indicate much higher than 435-450 on the industrials and 168-172 on the rails. In other words, from a technical viewpoint it would appear that the probabilities over the next few months favor a relatively wide trading area with extreme selectivity rather than an important general move either up down. This technical pattern appears to about coincide with the fundamental market background. Based on present earnings and dividends, the market is, in most cases, adequately valued at the present l''''ice level. Any sharp price rise would result in temporary overvaluation and a vulnerable technical pattern. On the other hand, with the rising trend in earnings and the favorable longer term outlook, any sharp decline in prices would present a favorable buying opportunity. Extreme selectivity will continue as illustrated by the recent action of the aircraft manufacturing issues. This group had been one of the market leaders with a rise of over 200 in eighteen months. The group became over- bought in February-March and in the past two weeks has declined sharply with individual issues dropping 20 to 40. The inherent strength of the general market is illustrated by the fact that the industrial average declined less than 4 despite the sharp drop in the important aircraft group. Fortunately, there are no other groups at the moment, with the possible exception of some of the machine tool issues, that appear as as did .. will be intensified over the next few months with some groups advancing at the same time that others are dpclining. It appears to be a time to be neither aggressively bullish or aggressively bearish on the general market, but to be extremely selective on individual situations. I would be inclined to avoid issues that have advanced sharply and appear to be overexploited and concentrate on issues that still appear reasonably valued Three such issues are Allegheny Ludlum, Dresser Industries and Joy Manufacturing which are all on my recommended list ALLEGHENY LUDLUM STEEL is yielding slightly over 4 at the present 'itice of around 48 and the 2.00 annual dividend. It is possible that a small stock dividend might be paid later in the year. First quarter earnings of 1.37 were sharply above 195trresults of 58/. Continued demand for special- ty steels should help the immediate picture and the long term pattern is very promising for titanium /prospects. Technically, the stock indicates 57 for the-nearer term and 74 for the longer term. There is downside sup- port at 43-39. I DRESSER INDUSTRIES is another issue that appears to have a minimum of downside risk and a very constructive long term technical pattern. At present prices of 43, the stock offers a yield of almost 6 on the 2.50 dividend. Earnings for the January quarter were,a bit below last year's results, but themerger with Lane-Wells and the consequent diversification of sales should result in a higher level of earnings over the not too distant future. The technical pattern is impressive with a long term indication of 70-80. There is downside support at 41-39. JOY MANUFACTURING at 4'9 yields over 5 on the 2.50 regular rate. Earnings for the fiscal year ended August 1954 were sharply lower at 4.08, but are slowly improving. Earnings for the March 31st quarter totalled 1.36 as compared with 1.04 the year before. Longer term prospects are favorable, both from a fundamental and technical Viewpoint. There is downside support at 45-42 and the upside indication is a nearer term 55 followed by 72 and much higher levels over the longer term. EDMUND W. TABELL '11 ArSTON & CO