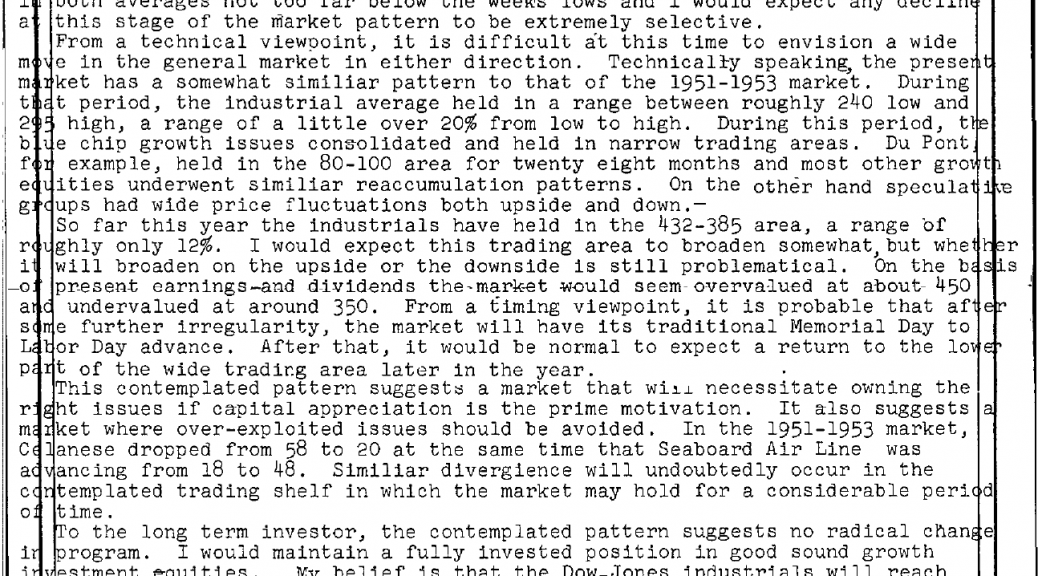 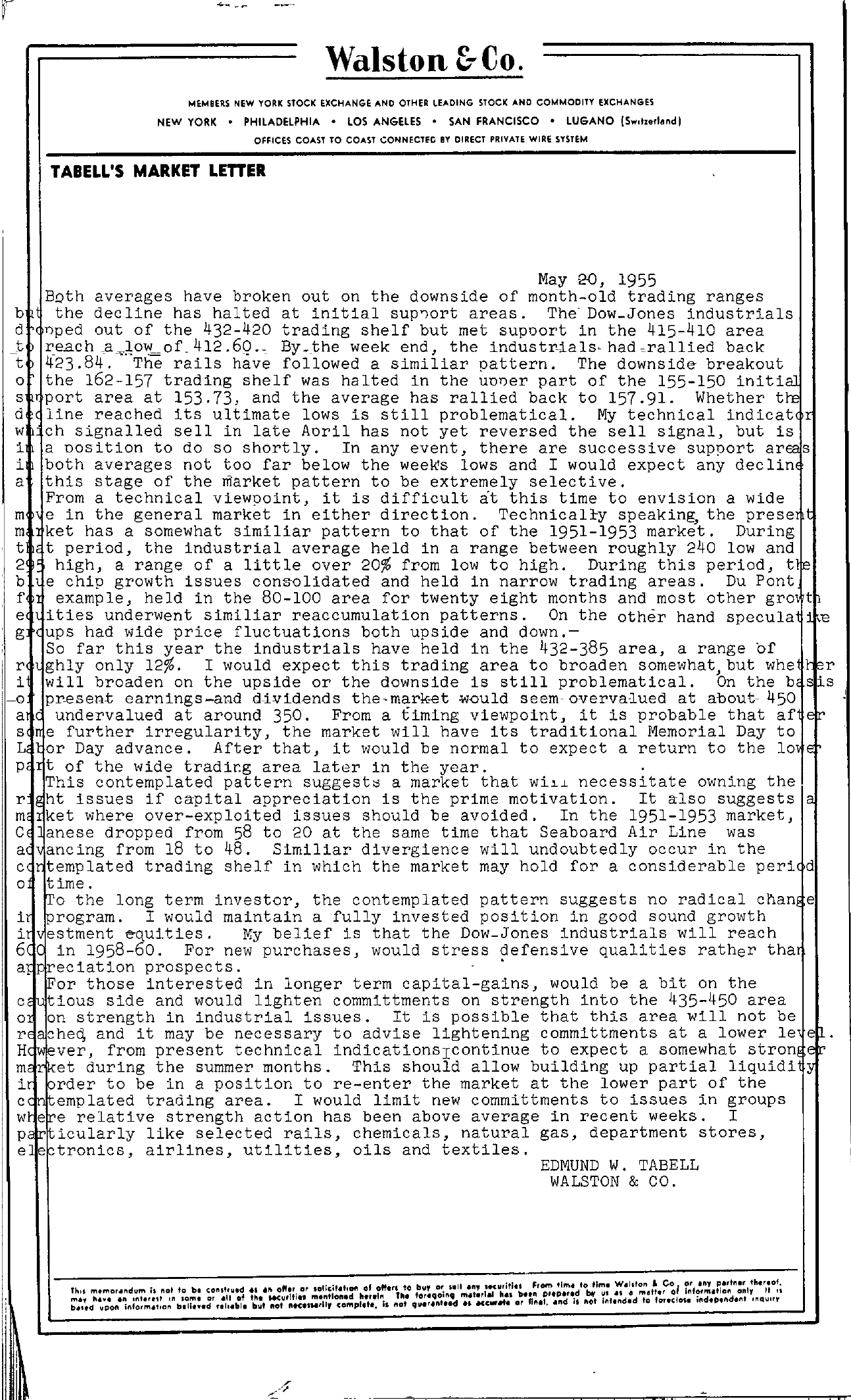 II Walston e-co. t.!EMBERS NEW YORK STOCK EXCHANGE AND OTHER LEADING STOCI( AND COMMODITY EXCHANGES NEW YORK PHILADELPHIA LOS ANGELES SAN FRANCISCO LUGANO (Sw,e,ld I OFFICES COAST TO COAST CONNECTEC BY DIRECT PRIVATE WIRE SYSTEM TABELL'S MARKET LEnER May 2-0, 1955 Both averages have broken out on the downside of month-old trading ranges b the decline has halted at initial areas. The- DowJones industrials d Dped out of the 432-420 trading shelf but met supoort in the 415-410 area reach 412.69.- By the week end, the industr-ials c had crallied back t 423.84. The rails have followed a similiar oattern. The downside breakout o the 162-157 trading shelf was halted in the uODer part of the 155-150 initiru s port area at 153.73, and the average has rallied back to 157.91. Whether tre d line reached its ultimate lows is still problematical. My technical indicat br 'w ch signalled sell in late Aoril has not yet reversed the sell Signal, but is i a oosition to do so shortly. In any event, there are successive support arss i both averages not too far below the lows and I would expect any declin a this stage of the market pattern to be extremely selective. From a technical viewpoint, it is difficult at this time to envision a Wide m e in the general market in either direction. Technically the prese m ket has a somewhat similiar pattern to that of the 1951-1953 market. During t t period, the industrial average held in a range between roughly 240 low and high, a range of a little over 20 from low to high. During this period, t e chip growth issues consolidated and held in narrow trading areas. Du Pont f example, held in the 80-100 area for twenty eight months and most other gro t e ities underwent similiar reaccumulation patterns. On the other hand B g ups had wide price fluctuations both upside and down.- So far this year the industrials have held in the 432-385 area, a range bf , r ghly only 12. I would expect this trading area to broaden somewhat, but whe I i will broaden on the upside or the downside is still problematical. On the b fsis 1-0 pr-esent earnings-alld d-ividBnds the-market wDuld seem- overvalued at about- 450 a undervalued at around 350. From a timing viewpoint, it is probable that afiEir' s e further irregularity, the market will have its traditional Memorial Day to L or Day advance. After that, it would be normal to expect a return to the p t of the 11ide tradir.g area later in the year. r This contemplated pattern suggesto a ht issues if capital appreciation is market that necessitate owning the the prime motivation. It also suggests la m ket where over-exploited issues should be avoided. In the 1951-1953 market, C anese dropped from 58 to 20 at the same time that Seaboard Air Line was a ancing from 18 to 48. Similiar divergience will undoubtedly occur in the c( templated trading shelf in which the market may hold for a considerable perid o time. the long term investor, the contemplated pattern suggests no radical chan e ir I would maintain a fully invested position in good sound growth estment My belief is that the Dow-Jones industrials will reach 6c in 1958-60. For new purchases, would stress defensive qualities rather tha aI reciation prospects. For those interested in longer term capital-gains, would be a bit on the c tious side and would lighten committments on strength into the 435-450 area o on strength in industrial issues. It is possible that this area will not be r cheq and it may be necessary to advise lightening committments at a lower le e He ever, from present technical indicationsIcontinue to expect a somewhat stronler rna during the summer months. This should allow building up partial liquidiy ir prder to be in a position to re-enter the market at the lower part of the ce trading area. I would limit new committments to issues in groups wreir'e relative strength action has been above average in recent weeks. I pc like selected rails, chemicals, natural gas, department stores, eJ tronics, airlines, utilities, oils and textiles. EDMUND W. TABELL WALSTON & CO. i