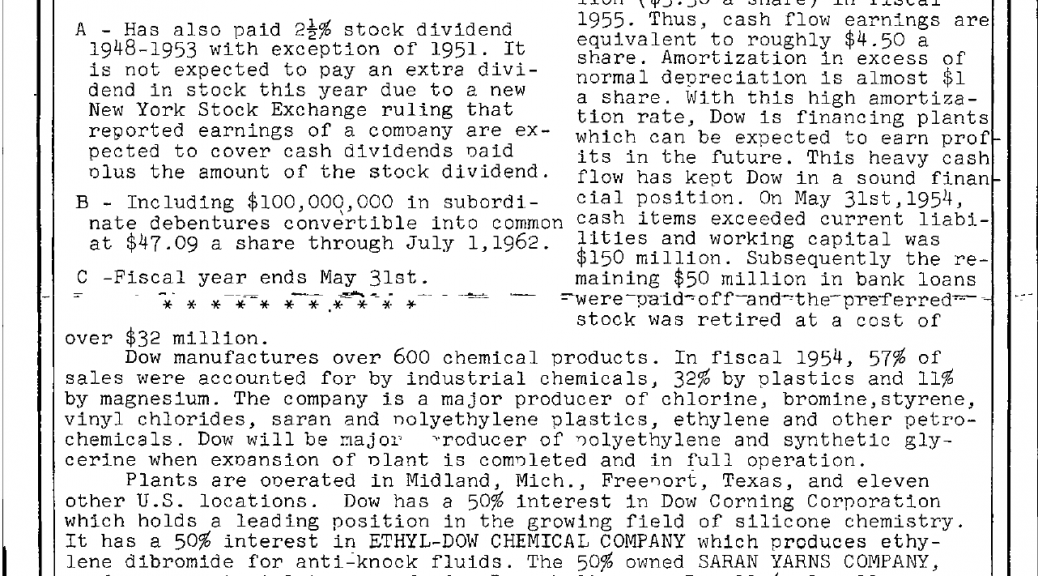 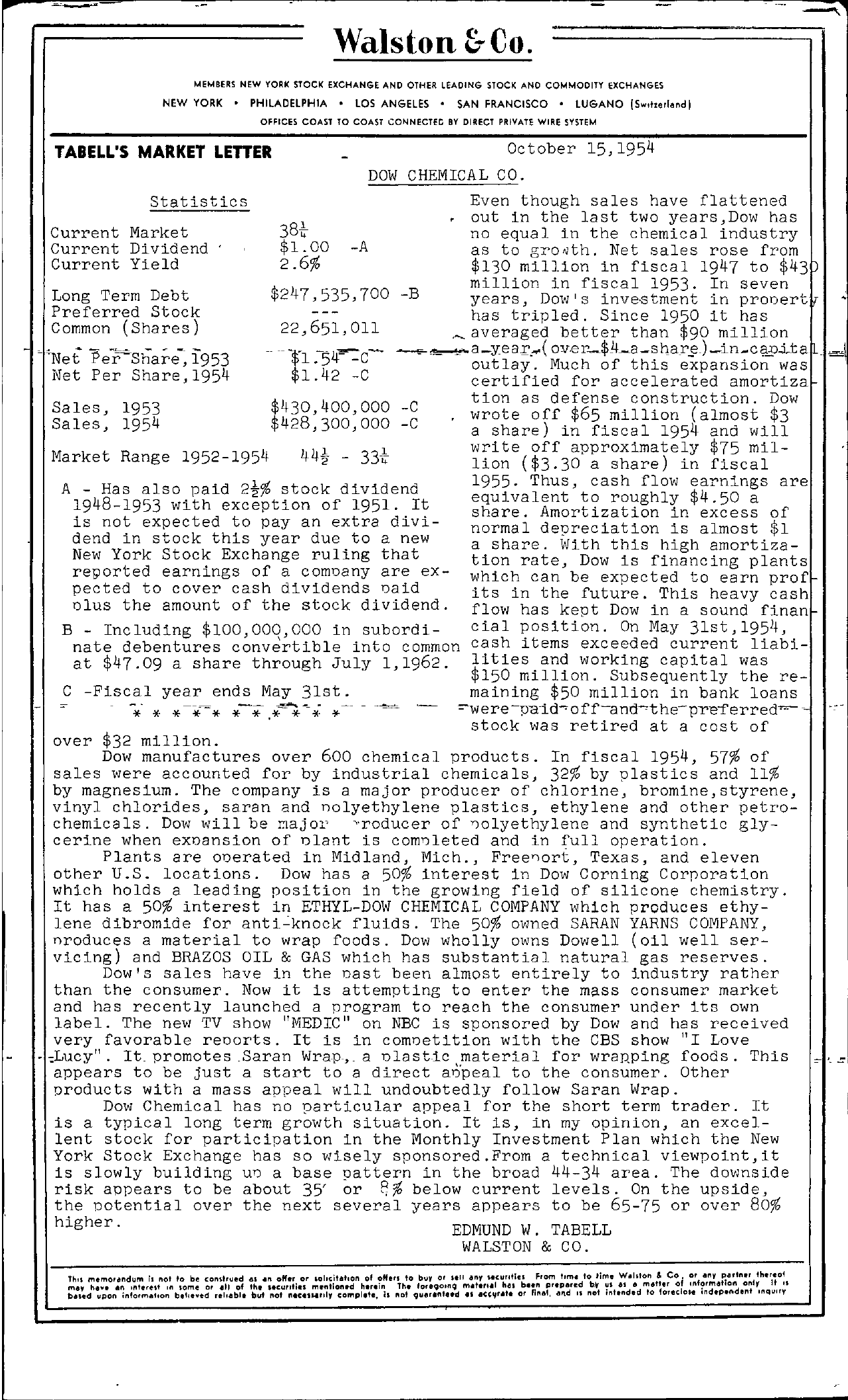 Walston &- Co. MEMBERS NEW YORK STOCK EXCHANGE AND OTHER LEADING STOCK AND COMMODITY EXCHANGES NEW YORK PHILADELPHIA LOS ANGELES SAN FRANCISCO LUGANO (s.,h.dl OFFICES COAST TO COAST CONNECTEr. BY DIRECT PRIVATE WIRE SYSTEM TABELL'S MARKET LETTER October 15,1954 DOW CHEMICAL CO. Statistics Even though sales have flattened out in the last two years,Dow has Current Market 38t- no equal in the chemical industry Current Dividend 1.00 -A as to groth. Net sales rose from Current Yield 2.6 130 million in fiscal 1947 to 43 Long Term Debt Preferred Stock Common (Shares) 247,535,700 -B 22,651,011 million in fiscal 1953. In seven years, Dow's investment in propert has tripled. Since 1950 it has averaged better than 90 million Net Per-Share-, 1953 Net Per Share,1954 j;l.-54-C- ……….ayeaJ',..( ov.er1jashar)inci3.'p.;Ltal'-' outlay. Much of this expansion was 1. 42 -C certified for accelerated amortiza Sales, 1953 Sales, 1954 430,400,000 -C 428,300,000 -C tion as defense construction. Dow wrote off 65 million (almost 3 a share) in fiscal 1954 and will Market Range 1952-1954 44t – 33t- write off approximately 75 million (3.30 a share) in fiscal A Has also paid 2- stock dividend 2' 1948 -1953 with exception of 1951. It is not expected to pay an extra dividend in stock this year due to a new New York Stock Exchange ruling that regorted earnings of a company are expected to cover cash dividends paid plus the amount of the stock dividend. 1955. Thus, cash flow earnings are equivalent to roughly 4.50 a share. Amortization in excess of normal depreciation is almost 1 a share. With this high amortization rate, Dow is financing plants which can be expected to earn prof its in the future. This heavy cash flow has kept Dow in a sound finan B – Including lOO,OOQ,OOO in subordi- cial position. On May 31st,1954, nate debentures convertible into common cash items exceeded current liabi- at 47.09 a share through July 1,1962. lities and working capital was 150 million. Subsequently the re- C -Fiscal year ends May 31st. ., — – — — – – – maining 50 million in bank loans –were-p-aidoff-and-the-pL'e–rerred– stock was retired at a cost of over 32 million. Dow manufactures over 600 chemical products. In fiscal 1954, 57 of sales were accounted for by industrial chemicals, 32 by plastics and 11 by magnesium. The company is a major producer of chlorine, bromine,styrene, vinyl chlorides, saran and nolyethylene plastics, ethylene and other petro- chemicals. Dow will be najol' roducer of YJolyethylene and synthetic gly- cerine when expansion of olant is completed and in full operation. Plants are operated in Midland, Mich., Freeort, Texas, and eleven other U.S. locations. Dow has a 50 interest in Dow Corning Corporation which holds a leading position in the growing field of silicone chemistry. It has a 50 interest in ETHYL-DOW CHEMICAL COMPANY which produces ethy- lene dibromide for anti'knock fluids. The 50 owned SARAN YARNS COMPANY, nroduces a material to wrap foods. Dow wholly owns Dowell (oil well ser- vicing) and BRAZOS OIL & GAS which has substantial natural gas reserves. Dow's sales have in the Dast been almost entirely to industry rather than the consumer. Now it is attempting to enter the maSs consumer market and has recently launched a program to reach the consumer under its own label. The new TV show MEDIC on NBC is sponsored by Dow and has received very favorable reDorts. It is in competition with the CBS show I Love . Lucy. It. promotes .Saran Wrap,. a Dlast.ic ..material for wrapping foods. This i appears to be just a start to a direct appeal to the consumer. Other products with a mass appeal will undoubtedly follow Saran Wrap. Dow Chemical has no particular appeal for the short term trader. It is a typical long term growth situation. It is, in my opinion, an excel- lent stock for participation in the Monthly Investment Plan which the New York Stock Exchange has so wisely sponsored.From a technical viewpoint,it is slowly building UP a base pattern in the broad 44-34 area. The downside risk appears to be about 35' or P. below current levels. On the upside, the potential over the next several years appears to be 65-75 or over 80 higher. EDMUND VI. TABELL WALSTON & CO.