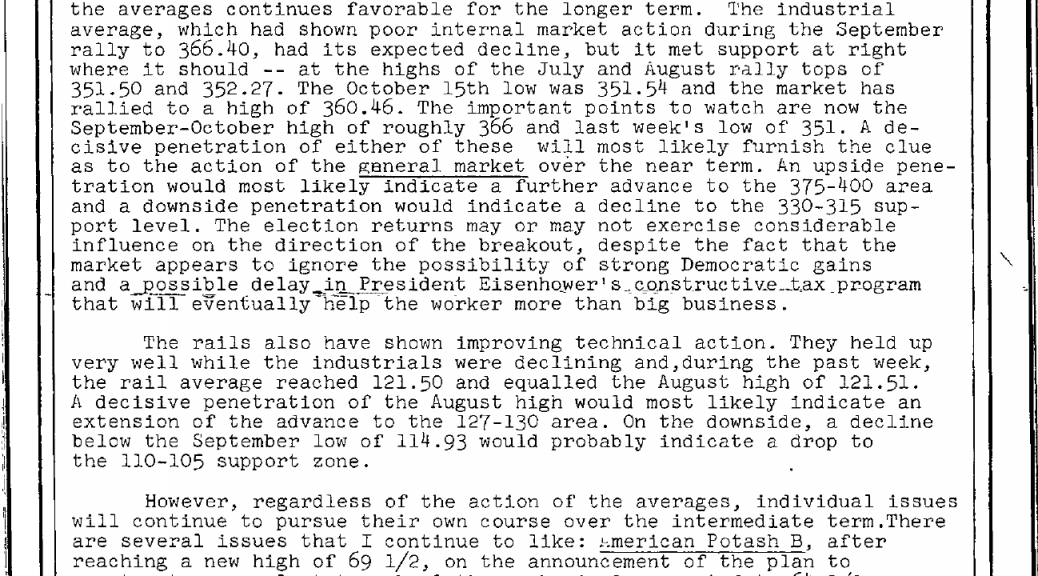 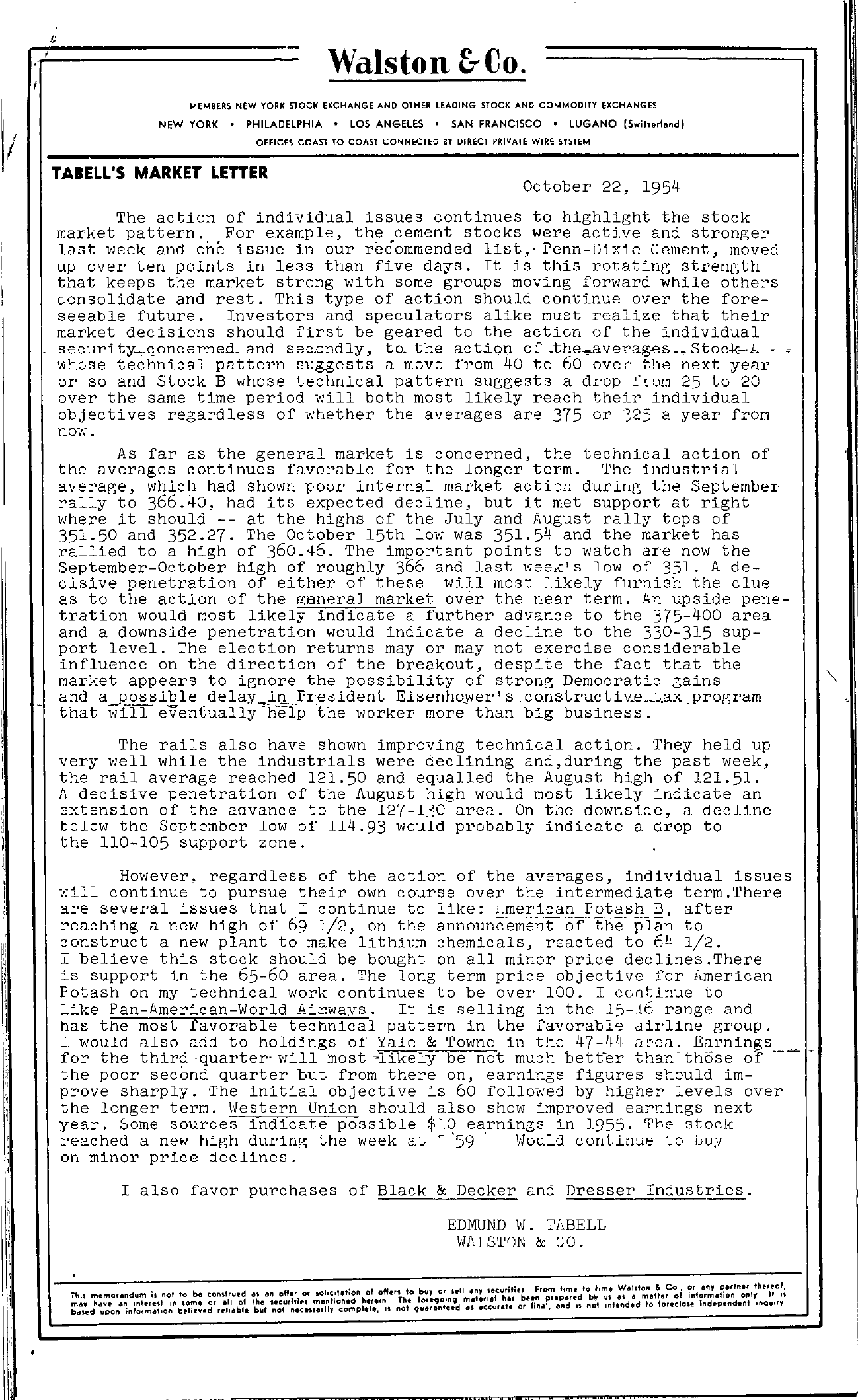 I) Walston f,- Co. MEMBERS NEW YORK STOCK EXCHANGE AND OTHER LEADING STOCK ANO COMMODITY EXCHANGES NEW YORK PHILADELPHIA LOS ANGELES SAN FRANCISCO LUGANO ISw;h.dd I / OFFICES COAST TO COAST CONNECTEC BY DIRECT PRIVATE WIRE SYSTEM TAB Ell'S MARKET lEnER October 22, 1954 The action of individual issues continues to highlight the stock market pattern. For example, the cement stocks were active and stronger last week and one issue in our recommended list, Penn-Dixie Cement, moved up over ten points in less than five days. It is this rotating strength that keeps the market strong with some groups moving forward while others consolidate and rest. This type of action should continuR over the fore- seeable future. Investors and speculators alike must realize that their market decisions should first be geared to the action of the individual securitY,Goncerned, and sec.ondly, to the actio!! of .the-,.-avet'ag-es., Stock-k. – whose technical pattern suggests a move from 40 to 60 over the next year Ior so and Stock B whose technical pattern suggests a drop om 25 to 20 over the same time period will both most likely reach their individual objectives regardless of whether the averages are 375 Dr 25 a year from now. I I l I As far as the general market is concerned, the technical action of the averages continues favorable for the longer term. 'The industrial average, which had shown poor internal market action during the September rally to 366.40, had its expected decline, but it met support at right where it should — at the highs of the July and August rally tops of 351.50 and 352.27. The October 15th low was 351.54 and the market has rallied to a high of 360.46. The important points to watch are now the September-October high of roughly 366 and last week's low of 351. A decisive penetration of either of these will most likely furnish the clue as to the action of the general market over the near term. An upside pene- tration would most likely indicate a further advance to the 375-400 area and a downside penetration would indicate a decline to the 330-315 support level. The election returns mayor may not exercise considerable influence on the direction of the breakout, despite the fact that the market appears to ignore the possibility of strong Democratic gains and aEossiQle delay ir!. President Eisenhoj\'er' sG)),nstructive t,ax program that will eventually help the worker more than big business. The rails also have shown improving technical action. They held up very well while the industrials were declining and,during the past week, the rail average reached 121.50 and equalled the August high of 121.51. 11 decisive penetration of the August high would most likely indicate an extension of the advance to the 127-130 area. On the downside, a decline below the September low of 114.93 would probably indicate a drop to the 110-105 support zone. However, regardless of the action of the averages, individual issues will continue to pursue their own course over the intermediate term.There are several issues that I continue to like kmerican Potash B, after reaching a new high of 69 1/2, on the announcement of the plan to construct a new plnt to make lithium chemicals, reacted to 64 1/2. I believe this stock should be bought on all minor price declines.There is support in the 65-60 area. The long term price objective fer hmerican Potash on my technical work continues to be over 100. I c(.ntJnue to like Pan-American-World Aiways. It is selling in the 15-16 range and has the most favorable technical pattern in the favorabl airline group. I would also add to holdings of Yale & Towne in the 47-44 area. Earnings for the third -quarter- will most likely be not much bett-er than-those of — the poor second quarter but from there on, earnings figures should improve sharply. The initial objective is 60 followed by higher levels over the longer term. \'Jestern Union should also show improved earnings next year. Some sources indicate possible 10 earnings in 1955. The stock reached a new high during the week at ,- '59' Would continue to iJu,r on minor price declines. I also favor purchases of Black & Decker and Dresser Industries. EDMUND W. nBELL VJIlT ST0N & CO. '0 t'nil' mlll' me,,oradum is not tI.!IV' olin ,nter'II In be lome cOllrl,led or .11 01 f ff t ., lin off,r Of lohcltehon 0 0 ef' 0 the ,.curitie. m.ntloned hr., Th,' b II n .ecurit lounyCJo'rnI'd. m . I hal r.t. in b or From 'tin. to prepared b.it fia! and nof me 1,1 ,n , Wahton til a m, ,ded to &C flu for, o, of clo oir 'oarnmy ,tpiooIllI,'OtI.l'Ythereo'fI, l1 indep,nd.nt ,nquory .t.,bll,ed upon i'olm.IoolI beli ….d rehabl, but no' lI,ceerlly comp II no quotran ee u ,