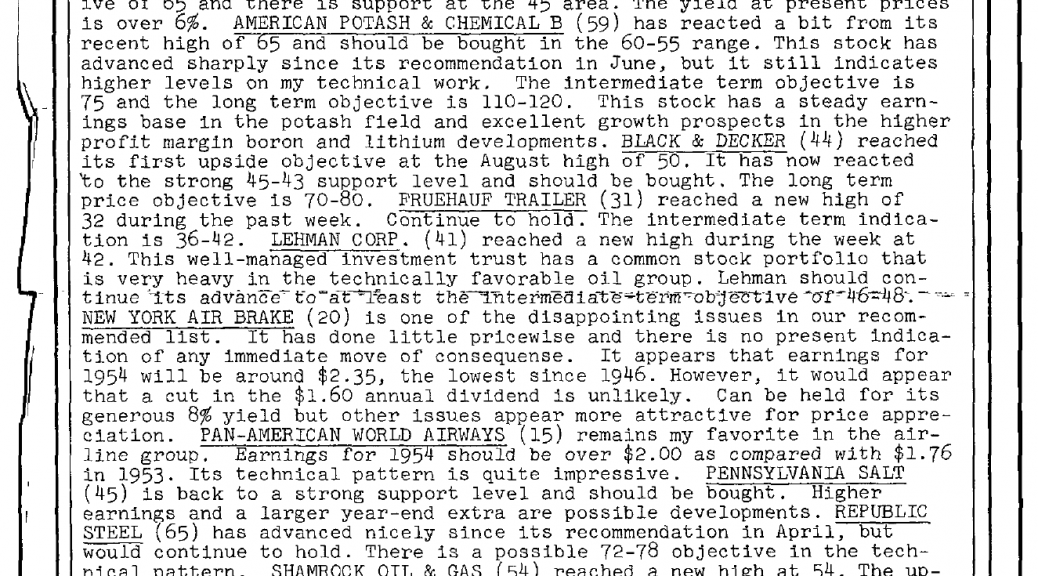 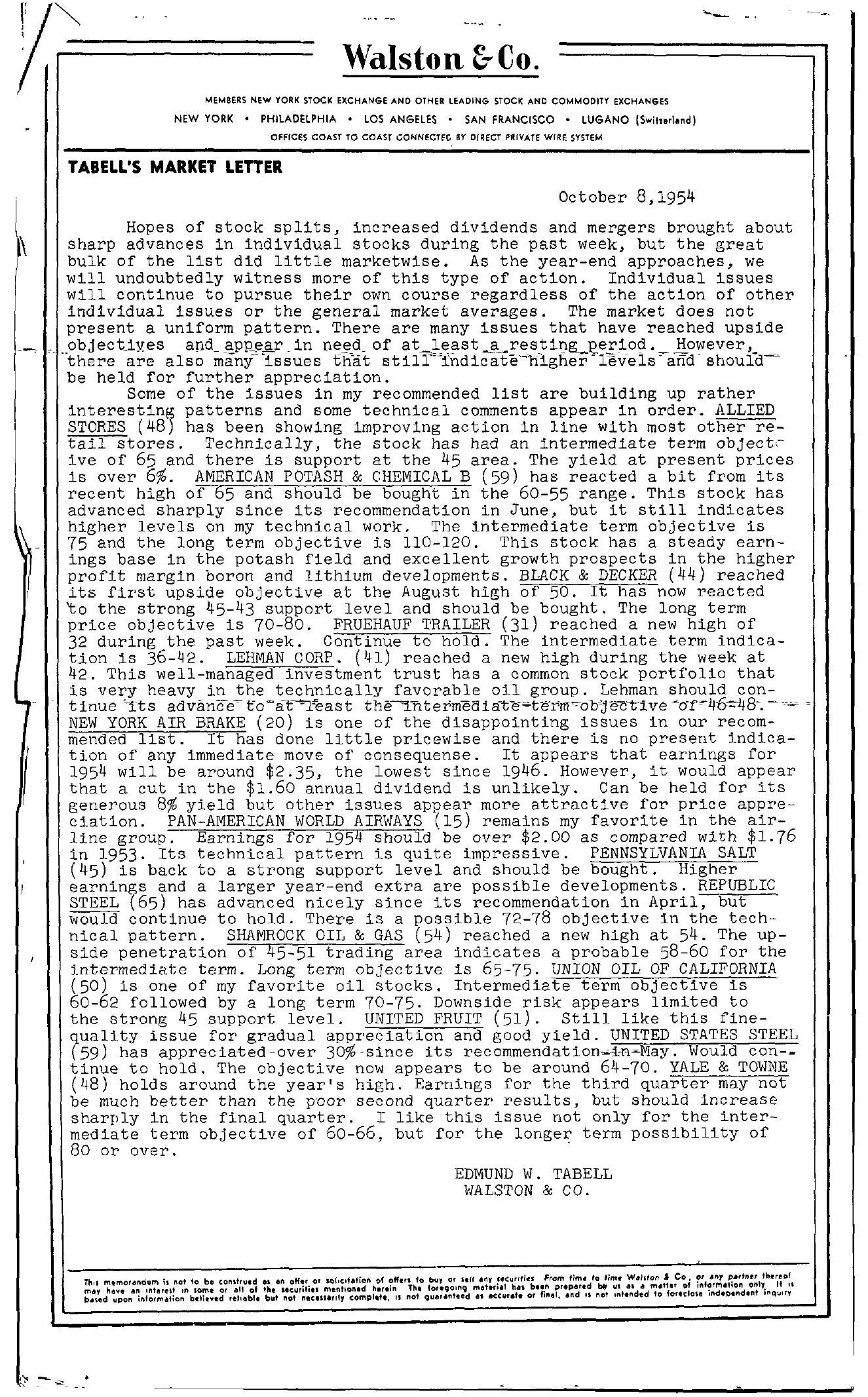 Walston &- Co. MEMBERS NEW 'fORK STOCK EXCHANGE AND OTHER LEADING STOCI( AND COMMODITY EXCHANGES NEW YORK PHILADELPHIA LOS ANGELES SAN FRANCISCO LUGANO ISw;tmld I OFFICES COAST TO COAf CONNECTtC BY DIRECT PRIVATE WIRE SYSTEM TABEll'S MARKET lEnER \ October 8,1954 Hopes of stock splits, increased dividends and mergers brought about sharp advances in individual stocks during the past week, but the great bulk of the list did little marketwise. As the year-end approaches, we will undoubtedly witness more of this type of action. Individual issues will continue to pursue their own course regardless of the action of other individual issues or the general market averages. The market does not present a uniform pattern. There are many issues that have reached upside objeciyes andAPearin need of at least resting period. However, there are also many-issues thoat stllYindicate-lilgherre;'elsand should be held for further appreciation. Some of the issues in my recommended list are building up rather interesting patterns and some technical comments appear in order. ALLIED STORES (48) has been showing improving action in line with most other re- tail stores. Technically, the stock has had an intermediate term object,- ive of 65 and there is support at the 45 area. The yield at present prices is over 6. AMERICAN POTASH & CHEMICAL B (59) has reacted a bit from its recent high of 65 and should be bought in the 60-55 range. This stock has advanced sharply since its recommendation in June, but it still indicates higher levels on my technical work. The intermediate term objective is 75 and the long term objective is 110-120. This stock has a steady earn- ings base in the potash field and excellent growth prospects in the higher profit margin boron and lithium developments. BLACK & DECKER (44) reached its first upside objective at the August high of 50. It has now reacted o the strong 45-43 support level and should be bought. The long term price objective is 70-80. FRUEHAUF TRAILER (31) reached a new high of 32 during the past week. Continue to hold. The intermediate term indica- tion is 36-42. LEHMAN CORP. (41) reached a new high during the week at 42. This well-managed investment trust has a common stock portfolio that is very heavy in the technically favorable oil group. Lehman should con- tinue 'ts advance to-ateast thelntermeaiate'terrlFobJet-ive -of-116–48-. —- 0 NEW YORK AIR BRAKE (20) is one of the disappointing issues in our recom- mended list. It has done little pricewise and there is no present indica- tion of any immediate move of consequense. It appears that earnings for 1954 will be around 2.35, the lowest since 1946. However, it would appear f that a cut in the 1.60 annual dividend is unlikely. Can be held for its generous 8 yield but other issues appear more attractive for price appre- ciation. PAN-AMERICAN WORLD AIRWAYS (15) remains my favorite in the air- line group. Earnings for 1954 should be over 2.00 as compared with 1.76 in 1953. Its technical pattern is quite impressive. PENNSYLVANIA SALT (45) is back to a strong support level and should be bought. Higher earnings and a larger year-end extra are possible developments. REPUBLIC STEEL (65) has advanced nicely since its recommendation in April, but would continue to hold. There is a possible 72-78 objective in the tech- nical pattern. SHAMROCK OIL & GAS (54) reached a new high at 54. The up- side penetration of 45-51 trading area indicates a probable 58-60 for the intermediate term. Long term objective is 65-75. UNION OIL OF CALIFORNIA (50) is one of my favorite oil stocks. Intermediate term objective is 60-62 followed by a long term 70-75. Downside risk appears limited to the strong 45 support level. UNITED FRUIT (51). Still like this fine- quality issue for gradual appreciation and good yield. UNITED STATES STEEL (59) has appreciaed-over 30-since its recommendationnMay. Would con- tinue to hold. The objective now appears to be around 64-70. YALE & TOWNE (48) holds around the year's high. Earnings for the third quarter may not be much better than the p'oor second quarter results, but should increase sharply in the final quarter. I like this issue not only for the inter- mediate term objective of 60-66, but for the longer term possibility of 80 or over. ' EDMUND W. TABELL ltlALSTON & CO . ….- –