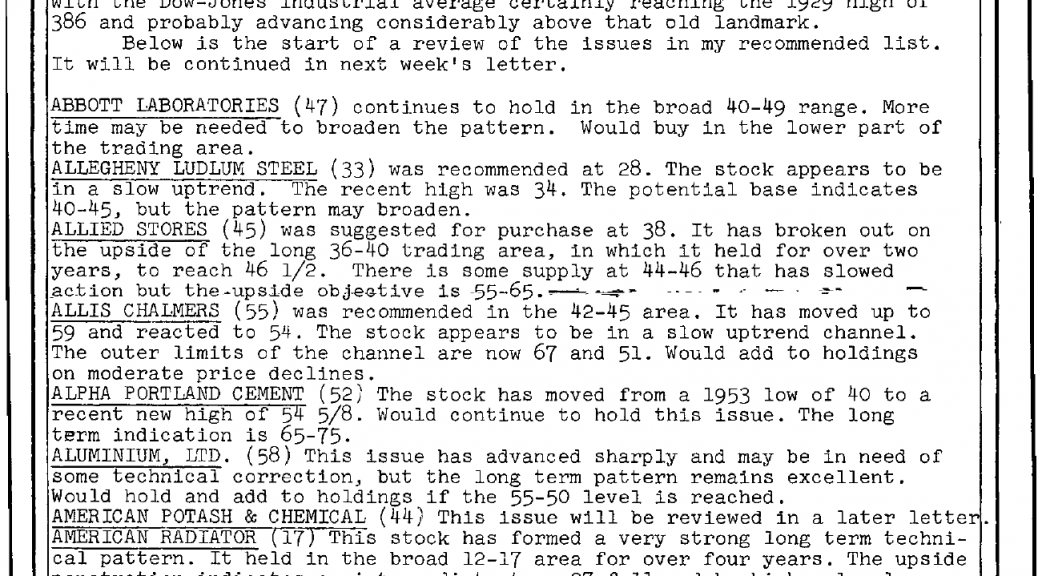 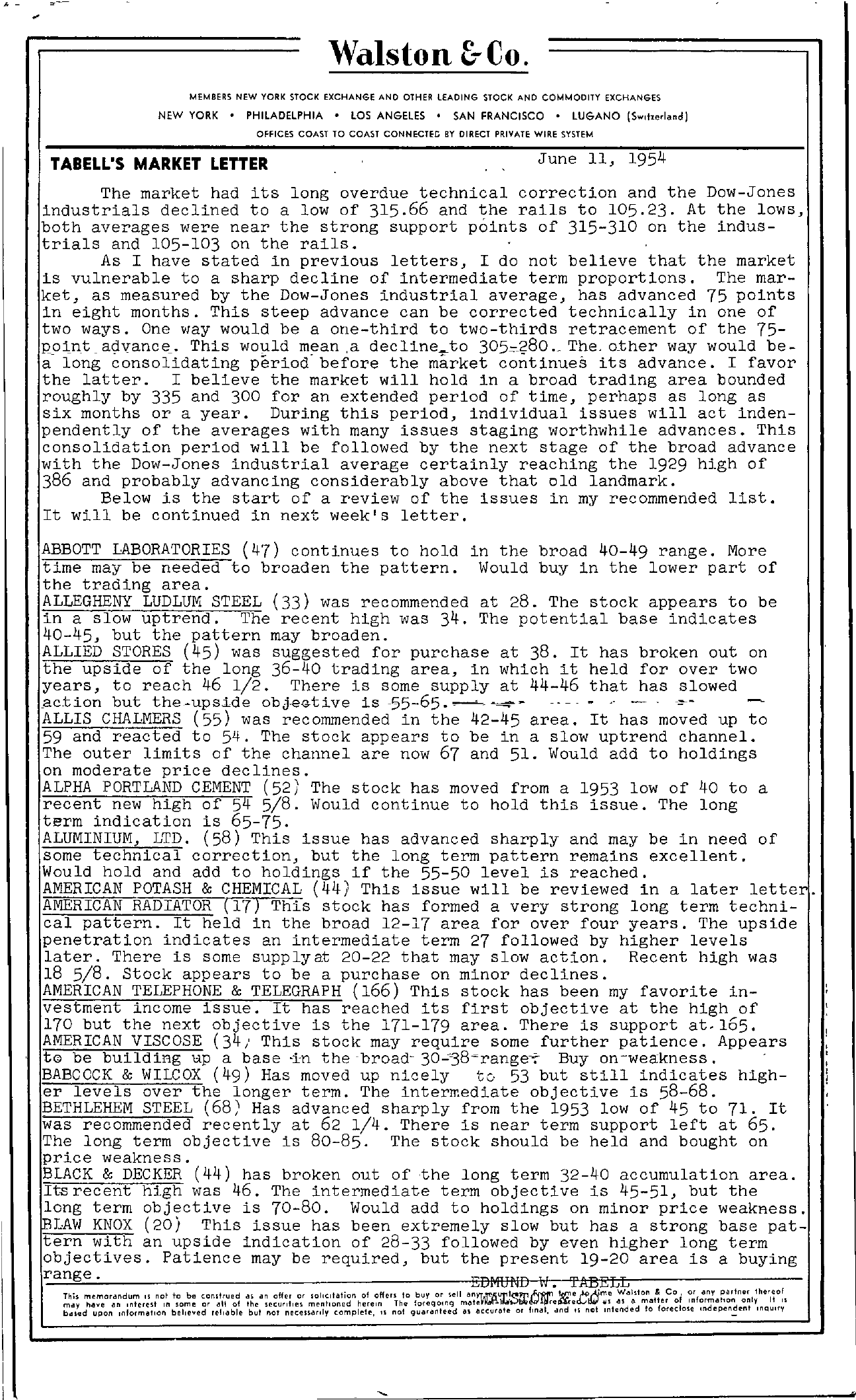 h ,— Walston &- Co. MEMBERS NEW YORK STOCK EXCHANGE AND OTHER LEADING STOCK AND COMMODITY EXCHANGES NEW YORK PHILADELPHIA lOS ANGELES SAN FRANCISCO LUGANO (S.,hedaod) OFFICES COAST TO COAST CONNECTEC BY DIRECT PRIVATE WIRE SYSTEM TABELL'S MARKET LETTER June 11, 1954 The market had its long overdue technical correction and the Dow-Jones industrials declined to a low of 315.66 and the rails to 105.23. At the lows, both averages were near the strong support points of 315-310 on the indus- trials and 105-103 on the rails. As I have stated in previous letters, I do not believe that the market is vulnerable to a sharp decline of intermediate term proportions. The mar- ket, as measured by the Dow-Jones industrial average, has advanced 75 points in eight months. This steep advance can be corrected technically in one of two ways. One way would be a one-third to two-thirds retracement of the 75point advance. This would mean ,a declineto 305280. The, oXher way would be- a- long consolidating period'before the market continues its advance. I favor the latter. I believe the market will hold in a broad trading area bounded roughly by 335 and 300 for an extended period of time, perhaps as long as six months or a year. During this period, individual issues will act indenpendently of the averages with many issues staging worthwhile advances. This consolidation period will be followed by the next stage of the broad advance with the Dow-Jones industrial average certainly reaching the 1929 high of 386 and probably advancing considerably above that old landmark. Below is the start of a review of the issues in my recommended list. It will be continued in next week's letter. ABBOTT LABORATORIES (47) continues to hold in the broad 40-49 range. More time may be needed to broaden the pattern. Would buy in the lower part of the trading area. ALLEGHENY LUDLUM STEEL (33) was recommended at 28. The stock appears to be in a slow uptrend. The recent high was 34. The potential base indicates 40-45, but the pattern may broaden. ALLIED STORES (45) was suggested for purchase at 38. It has broken out on the upside of the long 36-40 trading area, in which it held for over two years, to reach 46 1/2. There is some supply at 44-46 that has slowed ac,tion but the-upside obj-etive is -55-65.'—' – — – – – , – – ALLIS CHALMERS (55) was recommended in the 42-45 area. It has moved up to 59 and reacted to 54. The stock appears to be in a slow uptrend channel. The outer limits of the channel are now 67 and 51. Would add to holdings on moderate price declines. ALPHA PORTLAND CEMENT (52) The stock has moved from a 1953 low of 40 to a recent new high of 54 5/8. Would continue to hold this issue. The long term indication is 65-75. ALUMINIUM, LTD. (58) This issue has advanced sharply and may be in need of some technical correction, but the long term pattern remains excellent. Would hold and add to holdings if the 55-50 level is reached. AMERICAN POTASH & CHEMICAL (44) This issue will be reviewed in a later letter. AMERICAN RADIATOR (17) This stock has formed a very strong long term techni- cal pattern. It held in the broad 12-17 area for over four years. The upside penetration indicates an intermediate term 27 followed by higher levels later. There is some supplyat 20-22 that may slow action. Recent high was 18 5/8. Stock appears to be a purchase on minor declines. AMERICAN TELEPHONE & TELEGRAPH (166) This stock has been my favorite in- vestment income issue. It has reached its first objective at the high of 170 but the next objective is the 171-179 area. There is support at.lo5. AMERICAN VISCOSE (34/ This stock may require some further patience. Appears t be building 10lp a base in the -broad- 30'38range–;- Buy on-weakness. BABCOCK & WILCOX (49) Has moved up nicely te, 53 but still indicates high- er levels over the longer term. The intermediate objective is 58-68. BETHLEHEM STEEL (68) Has advanced sharply from the 1953 low of 45 to 71. It was recommended recently at 62 1/4. There is near term support left at 65. The long term objective is 80-85. The stock should be held and bought on price weakness. BLACK & DECKER (44) has broken out of the long term 32-40 accumulation area. Itsrecent high was 46. The intermediate term objective is 45-51, but the long term objective is 70-80. Would add to holdings on minor price weakness. LAW KNOX (20) This issue has been extremely slow but has a strong base pat- tern with an upside indication of 28-33 followed by even higher long term objectives. Patience may be required, but the present 19-20 area is a buying range. EDMUlffi '.1. 5'ABfLL iThh mflmorandum 15 not to bll C0n51rued maV have an Intllrest In some or 'III of b,ned upon Informallon beheYed reliable IH an offer or soliCitation of offllrs 10 thll SIICUrities mllntloned herein The bul nOI necenar,lv complete, u nol fbouryegoOrinsgellmaatneYT.\!MjI'tC-JJblliiUEf!l.tnl1ln/11lrVe,!eIe.t;I.!A.!Jimsc Wahton as a rna gua'lInteed a5 accurate or 'Ina I, .tInd IS not Infended 10 tfoerrCeoc0losoIenrfoIarnnmdvellpr1ea0n1r'1tneoenr I the'lof y IS InquirY