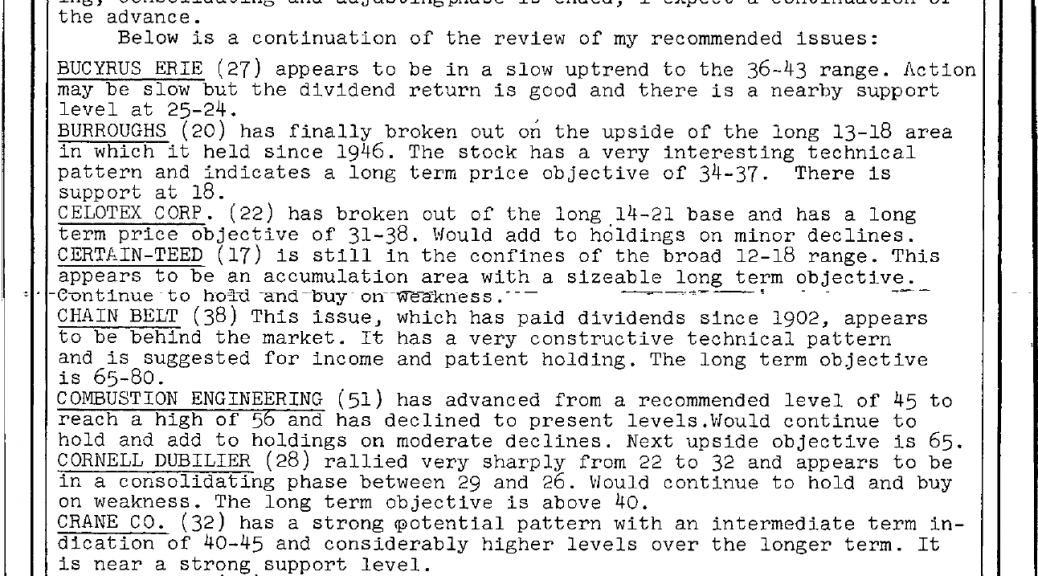 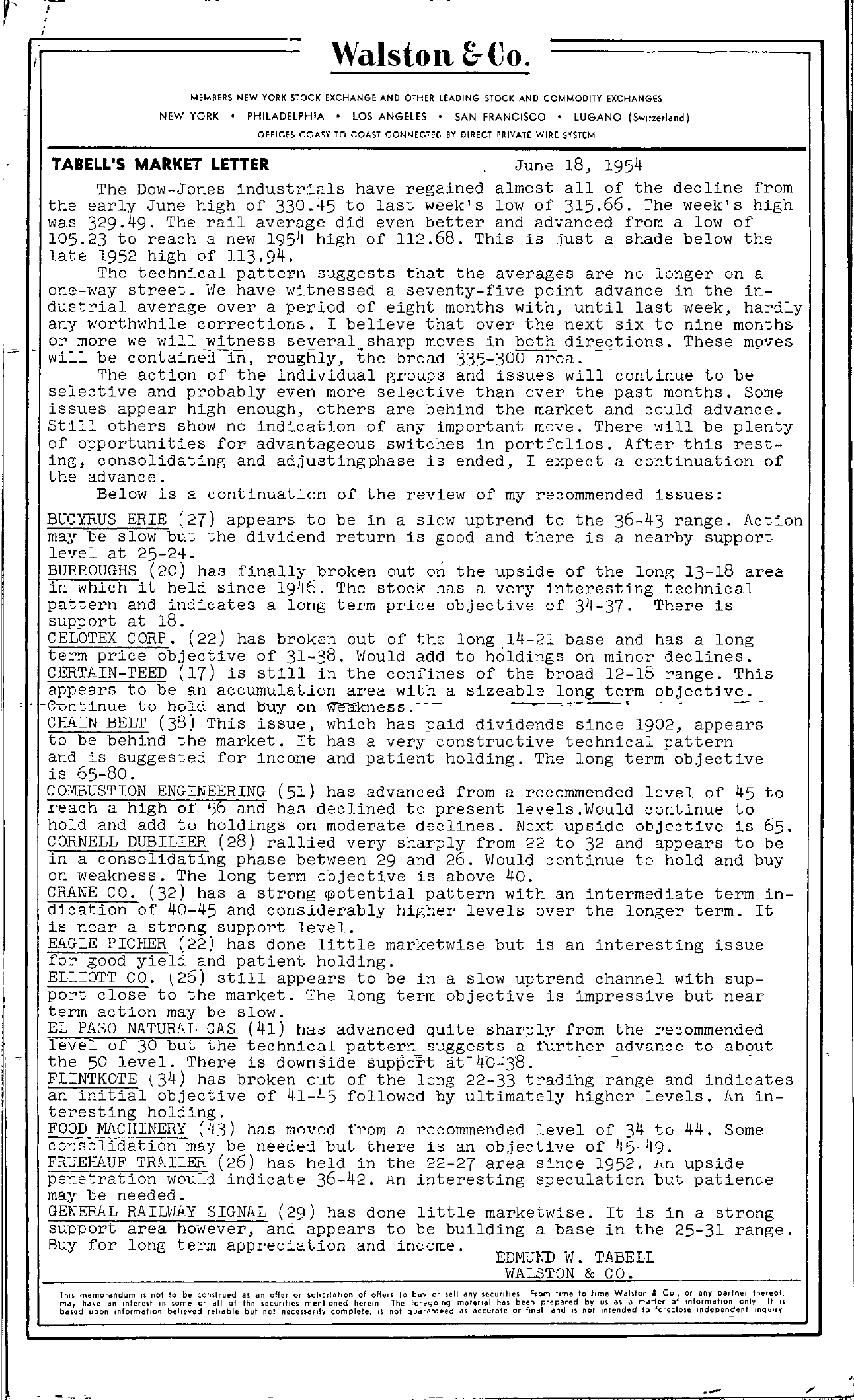 – r ,,I Walston &- Co. MEMBERS NEW YORK STOCK EXCHANGE AND OTHER LEADING STOCK AND COMMODITY EXCHANGES NEW YORK PHILADELPHIA LOS ANGELES SAN FRANCISCO LUGANO (Sw,.,Id) OFFICES COAsr TO COAST CONNECTE; BY DIRECT PRIVATE WIRE SYSTEM TABELL'S MARKET LETTER June 18, 1954 The Dow-Jones industrials have regained almost all of the decline from the early June high of 330.45 to last week's low of 315.66. The week's high was 329.49. The rail average did even better and advanced from a low of 105.23 to reach a new 1954 high of 112.68. This is just a shade below the late 1952 high of 113.94. The technical pattern suggests that the averages are no longer on a one-way street. \-Ie have witnessed a seventy-five point advance in the industrial average over a period of eight months with, until last week, hardly any worthwhile corrections. I believe that over the next six to nine months or more we will witness several sharp moves in both directions. These moves — – will be contained-in, roughly, the broad 335-300 area. — The action of the individual groups and issues will continue to be selective and probably even more selective than over the past months. Some issues appear high enough, others are behind the market and could advance. Still others show no indication of any important move. There will be plenty of opportunities for advantageous switches in portfolios. After this resting, consolidating and adjustingphase is ended, I expect a continuation of the advance. Below is a continuation of the review of my recommended issues BUCYRUS ERIE (27) appears to be in a slow uptrend to the 36-43 range. Action may be slow but the dividend return is good and there is a nearby support level at 25-24. BURROUGHS (20) has finally broken out on the upside of the long 13-18 area in which it held since 1946. The stock has a very interesting technical pattern and indicates a long term price objective of 34-37. There is support at 18. CELOTEX CORP. (22) has broken out of the long 14-21 base and has a long term price objective of 31-38. Would add to h61dings on minor declines. CERTAIN-TEED (17) is still in the confines of the broad 12-18 range. This appears to be an accumulation area with a sizeable long term objective. -C-ontinueto ho'lti-and-buyon–we-a'kness.— -.—. — — CHAIN BELT (38) This issue, which has paid dividends since 1902, appears to be behind the market. It has a very constructive technical pattern and is suggested for income and patient holding. The long term objective is 65-80. COMBUSTION ENGINEERING (51) has advanced from a recommended level of 45 to reach a high of 56 and has declined to present levels.Would continue to hold and add to holdings on moderate declines. Next upside objective is 65. CORNELL DUBILIER (28) rallied very sharply from 22 to 32 and appears to be in a consolidating phase between 29 and 26. viould continue to hold and buy on weakness. The long term objective is above 40. CRANE CO. (32) has a strong otential pattern with an intermediate term in- dication of 40-45 and considerably higher levels over the longer term. It is near a strong support level. EAGLE PICHER (22) has done little marketwise but is an interesting issue for good yield and patient holding. ELLIOTT CO. (26) still appears to be in a slow uptrend channel with sup- port close to the market. The long term objective is impressive but near term action may be slow. EL PASO NATURL GAS (41) has advanced quite sharply from the recommended level of 30 but the technical pattern suggests a further advance to about the 50 level. There is downside support cit- 4D38. – – – FLINTKOTE \34) has broken out of the long 22-33 tradlng range and indicates an initial objective of 41-45 followed by ultimately higher levels. Jm interesting holding. FOOD MACHINERY (43) has moved from a recommended level of 34 to 44. Some consolidation may be needed but there is an objective of 45-49. FRUEHAUF TRAILER (26) has held in the 22-27 area since 1952. jen upside penetration would indicate 36-42. An interesting speculation but patience may be needed. GENERhL RAILVIAY SIGNAL (29) has done little marketwise. It is in a strong support area however, and appears to be building a base in the 25-31 range. Buy for long term appreciation and income. EDMUND W. TABELL IALSTON & CO. Th, memorandum ,s not to be contrued a an offer or soliCItation of offers to buy or sell any sccurdle5 From time to lime Walston & Co, or any partner thereof, mlly hi!e all Interest In some or ilil of the securd,es mentioned herein The foregOing mter'I1 has been prep'lred bly U as a mtter of .nformat,,)n only It I based UPOfl Inform'lilon belIeved reh1ble but nol necessarily complete, II not qUdr1'11eed as accuraie or final, and not Intended to foreclole Independent Inqulrv