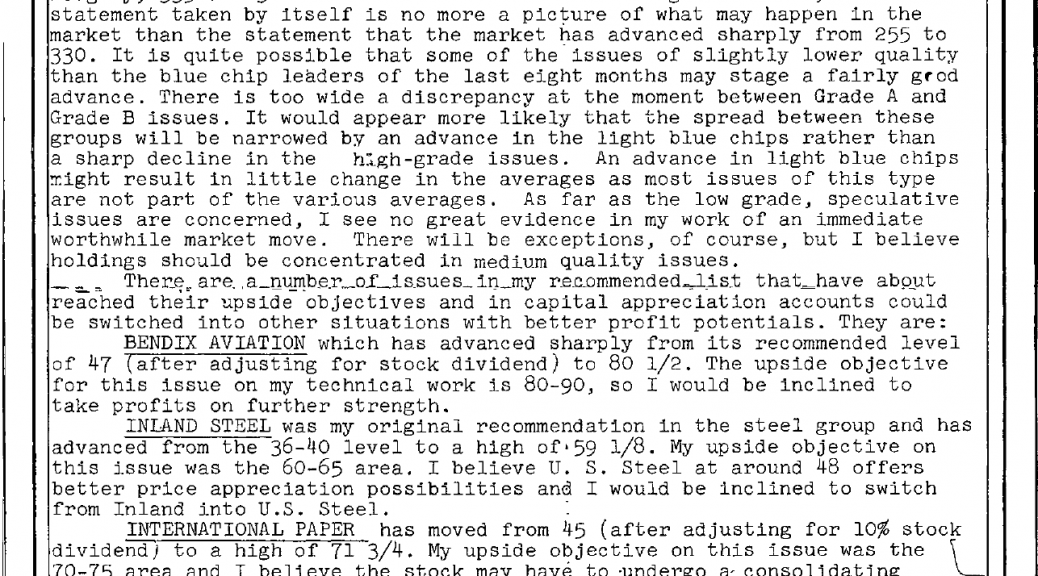 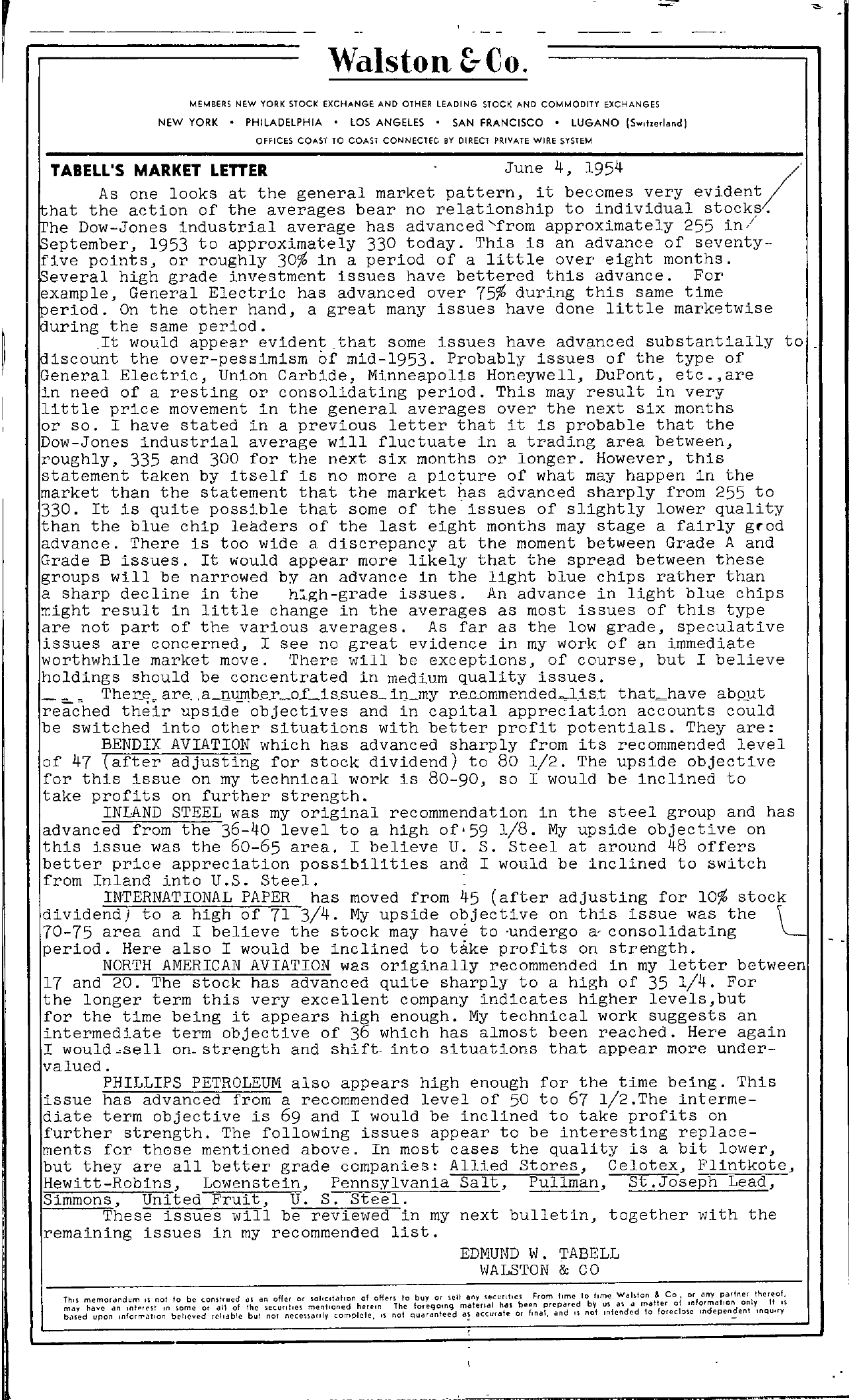 r Walston &Co. MEMBERS NEW YORK STOCK EXCHANGE AND OTHER LEADING STOCK AND COMMODITY EXCHANGES NEW YORK PHILADELPHIA LOS ANGELES SAN FRANCISCO LUGANO (Sw,t,laod) OFFICES CQASr TO COAST CONNECTEr. BY DIRECT PRIVATE WIRE SYSTEM TAB Ell'S MARKET lEnER . June 4, 1954 / As one looks at the general market pattern, it becomes very evident hat the action of the averages bear no relationship to individual stock. he Dow-Jones industrial average has advanced'from approximately 255 in/ eptember, 1953 to approximately 330 today. This is an advance of seventyfive pOints, or roughly 30 in a period of a little over eight months. everal high grade investment issues have bettered this advance. For example, General Electric has advanced over 75 during this same time eriod. On the other hand, a great many issues have done little marketwise during the same period . .It would appear evident that some issues have advanced substantially to discount the over-pessimism of mid-1953. Probably issues of the type of General Electric, Union Carbide, Minneapolis Honeywell, DuPont, etc.,are in need of a resting or consolidating period. This may result in very little price movement in the general averages over the next six months or so. I have stated in a previous letter that it is probable that the Dow-Jones industrial average will fluctuate in a trading area between, roughly, 335 and 300 for the next six months or longer. However, this statement taken by itself is no more a picture of what may happen in the market than the statement that the market has advanced sharply from 255 to 330. It is quite possible that some of the issues of slightly lower quality than the blue chip leaders of the last eight months may stage a fairly grod advance. There is too wide a discrepancy at the moment between Grade A and Grade B issues. It would appear more likely that the spread between these groups will be narrowed by an advance in the light blue chips rather than a sharp decline in the h'gh-grade issues. An advance in light blue chips T.ight result in little change in the averages as most issues of this type are not part of the various averages. As far as the low grade, speculative issues are concerned, I see no great evidence in my work of an immediate worthwhile market move. There will be exceptions, of course, but I believe holdings should be concentrated in medium quality issues. TherJ are. ,al1llmb.e.ro.fissuesil1my r.e.cDmmended..,.l.ist thathave about reached their upside objectives and in capital appreciation accounts could be switched into other situations with better profit potentials. They are BENDIX AVIATION which has advanced sharply from its recommended level of 47 (after adjusting for stock dividend) to 80 1/2. The upside objective for this issue on my technical work is 80-90, so I would be inclined to take profits on further strength. INLAND STEEL was my original recommendation in the steel group and has advanced from the 36-40 level to a high of'59 1/8. My upside objective on this issue was the 60-65 area. I believe U. S. Steel at around 48 offers better price appreciation possibilities and I would be inclined to switch from Inland into U.S. Steel. INTERNATIONAL PAPER has moved from 45 (after adjusting for 10 stock Ldividend) to a high of 71 3/4. My upside objective on this issue was the 70-75 area and I believe the stock may have to 'undergo a consolidating period. Here also I would be inclined to t&ke profits on strength. NORTH AMERICAN AVIATION was originally recommended in my letter between 17 and 20. The stock has advanced quite sharply to a high of 35 1/4. For the longer term this very excellent company indicates higher levels,but for the time being it appears high enough. My technical work suggests an intermediate term objective of 36 which has almost been reached. Here again I would sell on. strength and shift. into situations that appear more under- valued. PHILLIPS PETROLEUM also appears high enough for the time being. This issue has advanced from a recommended level of 50 to 67 1/2.The intermediate term objective is 69 and I would be inclined to take profits on further strength. The following issues appear to be interesting replacements for those mentioned above. In most cases the quality is a bit lower, but they are all better grade companies Allied Stores, Celotex, Flintkote, Hewitt-Robins, Lowenstein, Pennsylvania Salt, Pullman, St.Joseph Lead, Simmons, United Fruit, U. S. Steel. These issues will be reviewed in my next bulletin, together with the remaining issues in my recommended list. EDMUND 1'1. TABELL I'IALSTON & CO Thl may memordndum have an Inl .. 'f('tno,tn 10 be lome contrued or 311 of bMed upon InforlT'i1!lon believed rel'db'e tb'IhIuelanneOcoIfufrndre'ceeolrlmoroellnlly(tdIoc'nloelmidpoln htoeerf ,eionf,fsernT' ohtieo buy or sell /lny IE-curd,es foregoong qu,Fonteed moaledoccdul r hilS ate b or From lime een prepdred final, dnd II to !.me Walston & Co, or 'Iny partner ther('of, by us ,H a maller of ,nlormail0'd only 11., not Intended 10 lore close Indepen ent 1IlQUy