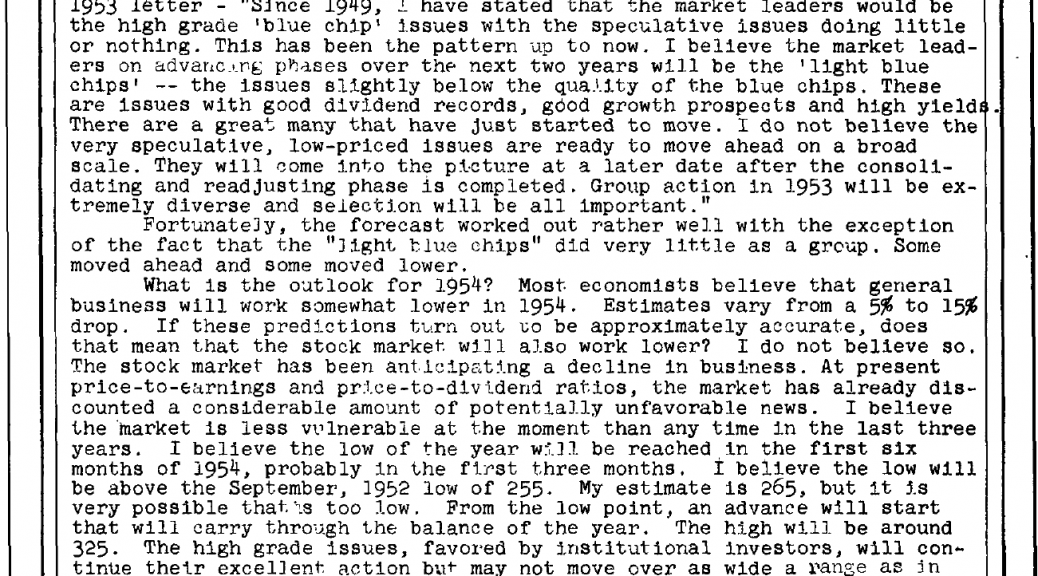 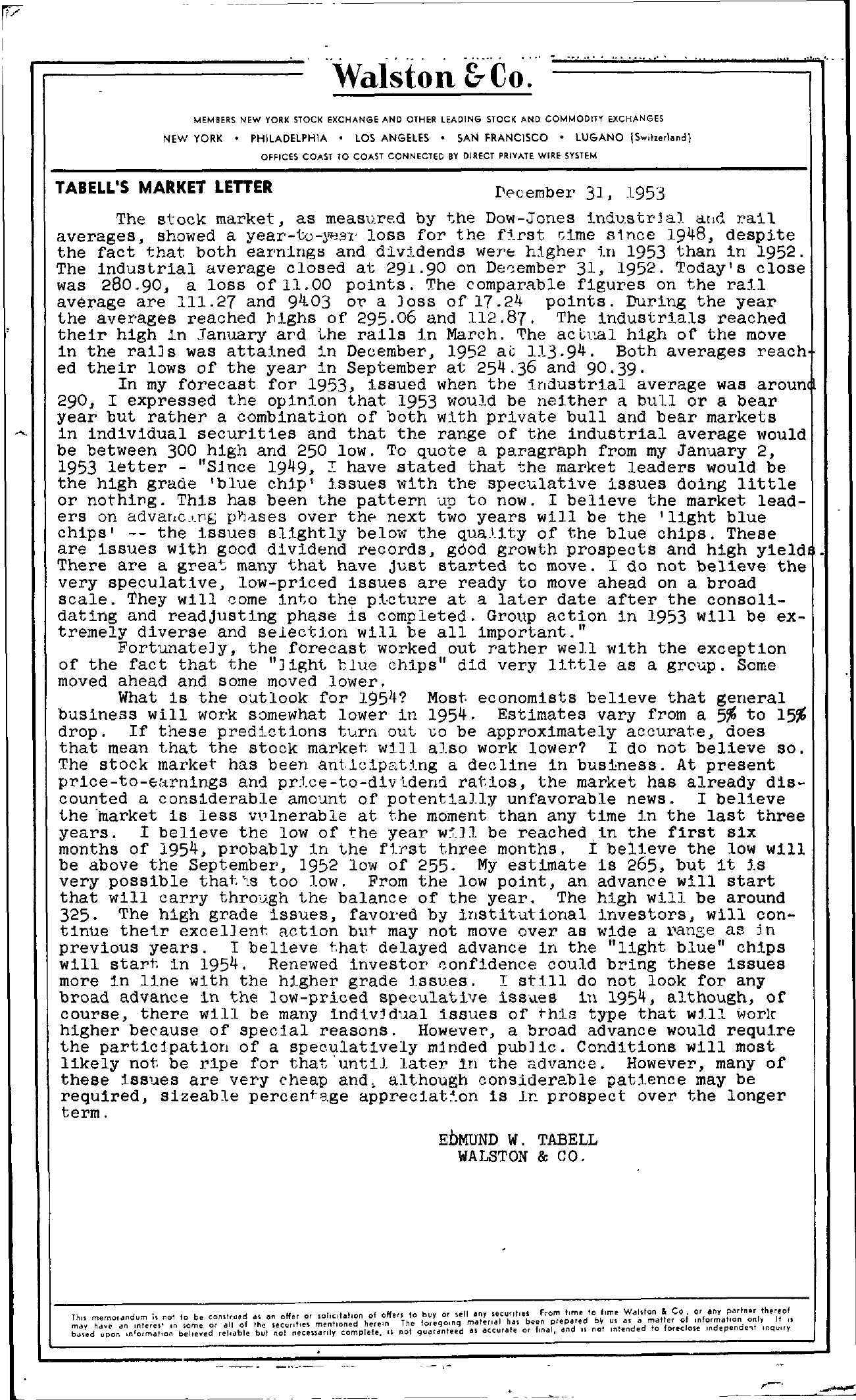 P I . … – … ,.. … …. ., .. '.. Walston &Co. MEMBERS NEW YORK STOCK EXCHANGE AND OTHER LEADING STOCK AND COMMODITY EXCHANGES NEW YORK PHILADELPHIA LOS ANGELES SAN FRANCISCO LUGANO ISw,.,Id) OFFICES COAST TO COAST CONNECTEr; BY DIRECT PRIVATE WIRE SYSTEM TABELLS MARKET LEnER December 3. 1953 The stock market, as measured by i;he Dow-Jones indu.s tr J aJ arId rail averages, showed a year-to-;YO.31' loss for the f5.!'st Gime s1 nce 1948 despite the fact that both earnings and divldends weT' higher tn 1953 than in 1952. The industrial average closed at 291.90 on Deember 31, 1952. Today's close was 280.90, a loss of 11.00 pOints. The comparable figures on the ratl average are 111.27 and 94.03 01' a loss of 17.24 potnts. During the year the averages reached btghs of 295.06 and 112.87. The industrtals reached their high 1n January ard the rails tn March. he aCGal high of the move in the rails was attained in December. 1952 ac 113.94. Both averages reach ed their lows of the year in September at 254.36 and 90.39. In my fOrecast for 1953, issued when the tndustrial average was aroun 290, I expressed the opinion that 1953 would be neither a bull or a bear year but rather a combination of both with private bull and bear markets in individual securities and that the range of the industrial average would be between 300 high and 250 low. To quote a paragraph from my January 2. 1953 letter – Since 1949. ! have stated that the market leaders would be the high grade 'blue chip' issues with the speclative issues dOing little or nothing. This has been the pattern up to now. I believe the market leaders on advar,c-,x'b pl'Joises over thE next two years will be the 'light blue chips' — the issues slightly below the qua.l.Hy of the blue chips. These are issues with good dividend records. good growth prospects and high yield . There are a grea'; many that have just started to move. I do not believe the very speculative. low-priced issues are ready to move ahead on a broad scale. 'l'hey will come ini;o the pi,cture at a later date after the consoli- dating and readjusting phase is completed. Group action in 1953 will be ex- tremely diverse and selectlon will be all important. Fortunately, the forecast worked out rather well with the exception of the fact that the light t.luG chips did very little as a grop. Some moved ahead and some moved lower. What is the oJ.tlook for 1954 Most economists believe that general business will work somewhat lower in 1954. Estimates vary from a 5 to 15 drop. If these predictions trn out o be approximately accurate, does that mean that the stock market. will also work lower I do not believe so. The stock market has been ant.lclpU.ng a decline in business. At present price-to-Ernings and pr.ce-to-divi.dend ratiOS, the market has already discounted a considerable amount of potentially unfavorable news. I believe the 'market is less vvlnerable at the moment than any time in the last three years. I believe the low of the year wll be reached ,in the first six months of 1954, probably in the first three months. I believe the low will be above the September, 192 low of 255. My estimate is 265, but it l.s very possible that, ',8 too low. From the low point, an advance will start that will carry through the balance of the year. The high will be around 325. The high grade issues, favored by lnstitutional investors. will con- tinUe their excellent. action but may not move over as wide a vange as jn previous years. I believe t.hat. delayed advance in the light blue chips will start. in 1954. Renewed investor confidence could bring these issues more in line with the hlgher grade issu.es. I still do not look for any broad advance in the low-priced speculative iss….es in 1954, although, of course. there will be many indtvj dual issues of this type that '111.11 lOrlc higher because of special reasonS. However, a broad advance would require the participation of a spec.ulatively minded public. Conditions will most likely not. be ripe for that'untiJ. later in the advance. However. many of these issues are very cheap and, although conSiderable patl.ence may be required, Sizeable percentg,ge apprec1.at.on is 1IC prospect over the longer term. EDMUND W. TABELL WALSTON & CO.