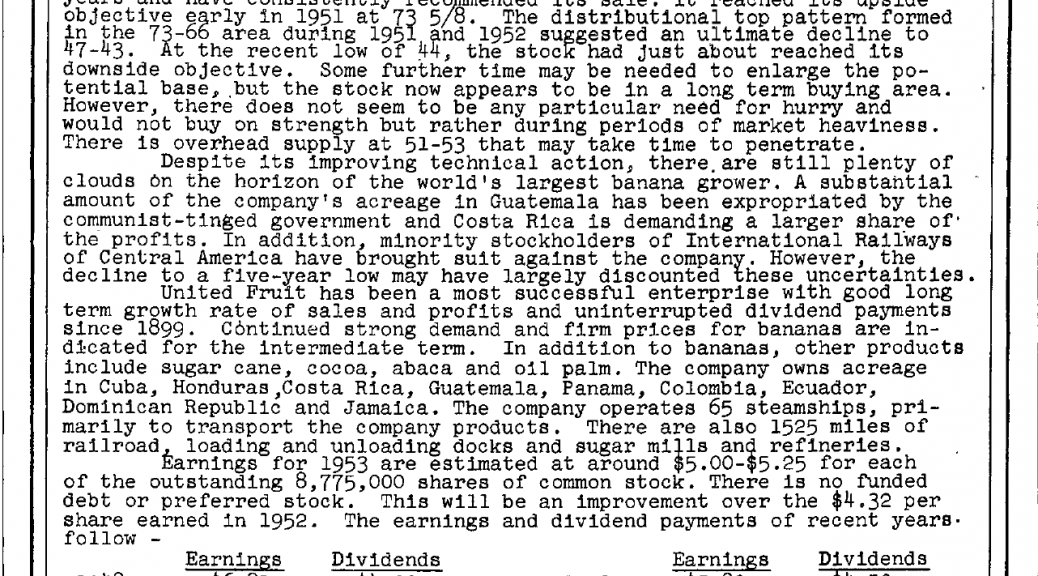 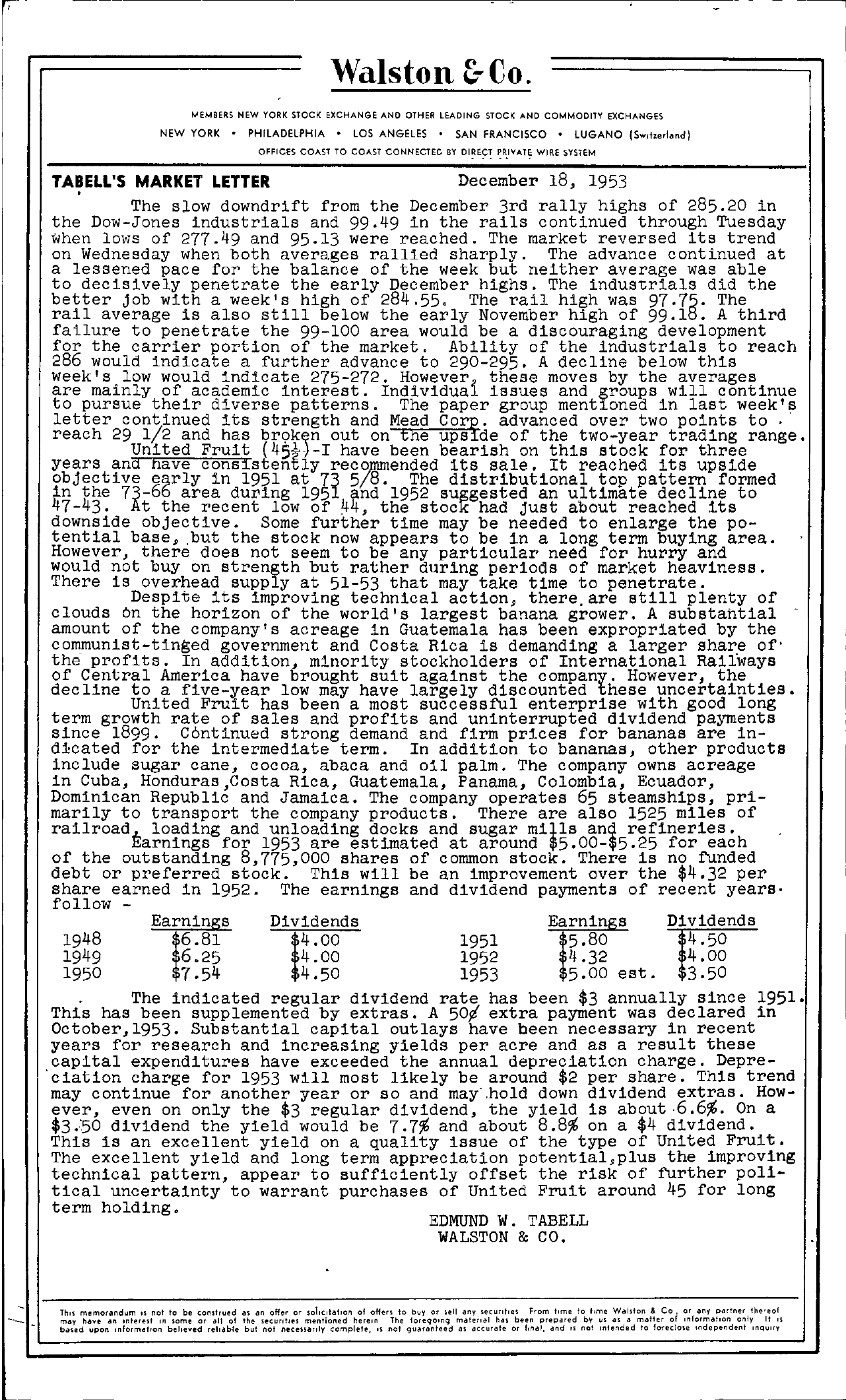 ————————————————————.———- ———, Walston e- Co. t.iEMBERS NEW YORK STOCK EXCHANGE ANO OTHER LEADING STOCK AND COMMODITY EXCHANGES NEW YORK PHILADELPHIA LOS ANGELES SAN FRANCISCO LUGANO (Swd,ld) OFFICES COAST TO COAST CONNECTEC BY OIE RIVAT WIRE SYSTEM TABELL'S MARKET LEnER December 18, 1953 The slow downdrift from the December 3rd rally highs of 285.20 in the Dow-Jones industrials and 99.49 in the rails continued through Tuesday when lows of 277.49 and 95.13 were reached. The market reversed its trend on Wednesday when both averages rallied sharply. The advance continued at a lessened pace for the balance of the week but neither average was able to decisively penetrate the early December highs. The industrials did the better job with a week's high of 284.55. The rail high was 97.75. The rail average is also still below the early November high of 99.18. A third failure to penetrate the 99-100 area would be a discouraging development for the carrier portion of the market. Ability of the industrials to reach 286 would indicate a further advance to 290-295. A decline below this week's low would indicate 275-272. However these moves by the averages are mainly of academic interest. Individuai issues and groups will continue to pursue their diverse patterns. The paper group mentioned in last week's letter continued its strength and Mead cor. advanced over two points to ' ' reach 29 1/2 and has br9kn out on the ups de of the two-year trading range. United Fruit (45-I have been bearish on this stock for three years and have consIstently recommended its sale. It reached its upside objective erly in 1951 at 73 5/. The distributional top pattern formed in the 73-66 area during 1951 and 1952 suggested an ultimate decline to 47-43. At the recent low of 4, the stock had just about reached its downside objective. Some further time may be needed to enlarge the po- tential base, ,but the stock now appears to be in a long term buying area. However, there does not seem to be any particular need for hurry and would not buy on strength but rather during periods of market heaviness. There is overhead supply at 51-53 that may take time to penetrate. Despite its improving technical action, there. are still plenty of clouds 6n the horizon of the world's largest banana grower. A substahtial – amount of the company's acreage in Guatemala has been expropriated by the communist-tinged government and Costa Rica is demanding a larger share of' the profits. In addition, minority stockholders of International Railways of Central America have brought suit against the company. However, the decline to a five-year low may have largely discounted these uncertainties. United Fruit has been a most successful enterprise with good long term growth rate of sales and profits and uninterrupted dividend payments since 1899. C6ntinued strong demand and firm prices for bananas are in- d1cated for the intermediate term. In addition to bananas, other products include sugar cane, cocoa, abaca and oil palm. The company owns acreage in Cuba, Honduras ,Costa Rica, Guatemala, Panama, Colombia, Ecuador, Dominican Republic and Jamaica. The company operates 65 steamships, pri- marily to transport the company products. There are also 1525 miles of railroad loading and unloading docks and sugar mils anQ refineries. arnings for 1953 are estimated at around 5.00-5.25 for each of the outstanding 8,775,000 shares of common stock. There is no funded debt or preferred stock. This will be an improvement over the 4.32 per share earned in 1952. The earnings and dividend payments of recent years follow – Earnings Dividends Earnings Dividends 1948 1949 1 11950 6.81 6.25 7.54 4.00 4.00 4.50 i1951 1952 1953 5 80 4.32 5.00 est. 4.50 4.00 3.50 . The indicated regular dividend rate has been 3 annually since 1951, This has been supplemented by extras. A 501 extra payment was declared in October,1953. Substantial capital outlays have been necessary in recent years for research and increasing yields per acre and as a result these capital expenditures have exceeded the annual depreciation charge. Depre'ciation charge for 1953 will most likely be around 2 per share. This trend may continue for another year or so and may' ,hold down dividend extras. However, even on only the 3 regular dividend, the yield is about.6.6. On a 3.50 dividend the yield would be 7.7 and about 8.8 on a 4 dividend. This is an excellent yield on a quality issue of the type of United Fruit. The excellent yield and long term appreciation potential,plus the improving technical pattern, appear to sufficiently offset the risk of further political uncertainty to warrant purchases of United Fruit around 45 for long term holding. EDMUND W. TABELL WALSTON & CO. -'- Thl memorandum IS nol to be construed as an offer or olullallon of offer to buy or all any e(Urltles From time 10 lime Walston & Co, or anv partner lht''tof may have an Interest In some or ,11 ol the se'LHltle5 mentioned hereIn The ioreqolllg matenal has been prepared bl' 1,15 a5 a maHer 0/ Inlormahon only II 15 baud upon Informallon believed relIable but not neceHlrLly complete, 15 not gU,Hanteed a5 iccurale or Ilnal, dnd 15 1'101 Intended to loreclose Independent InquIry