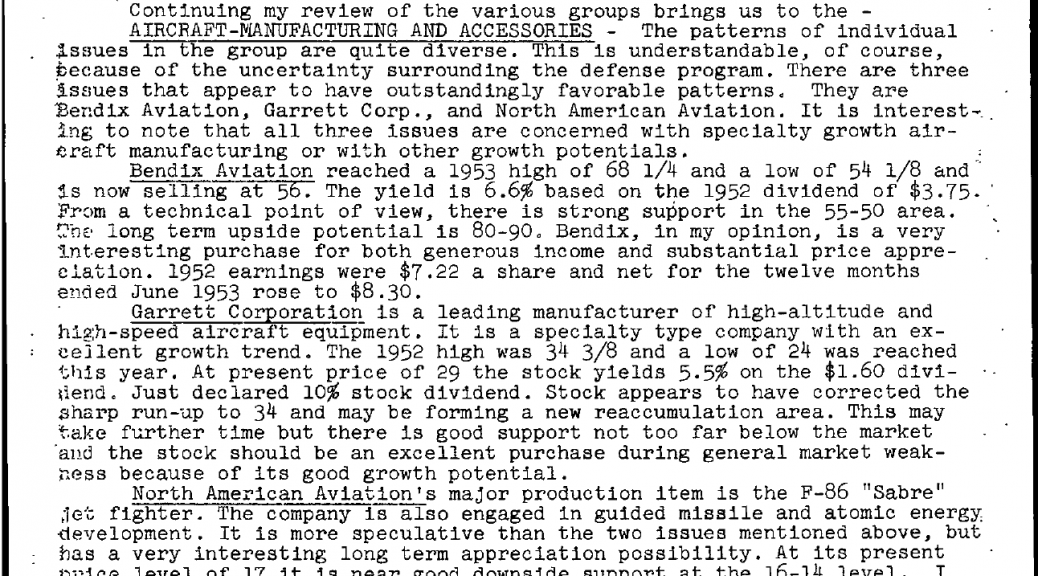 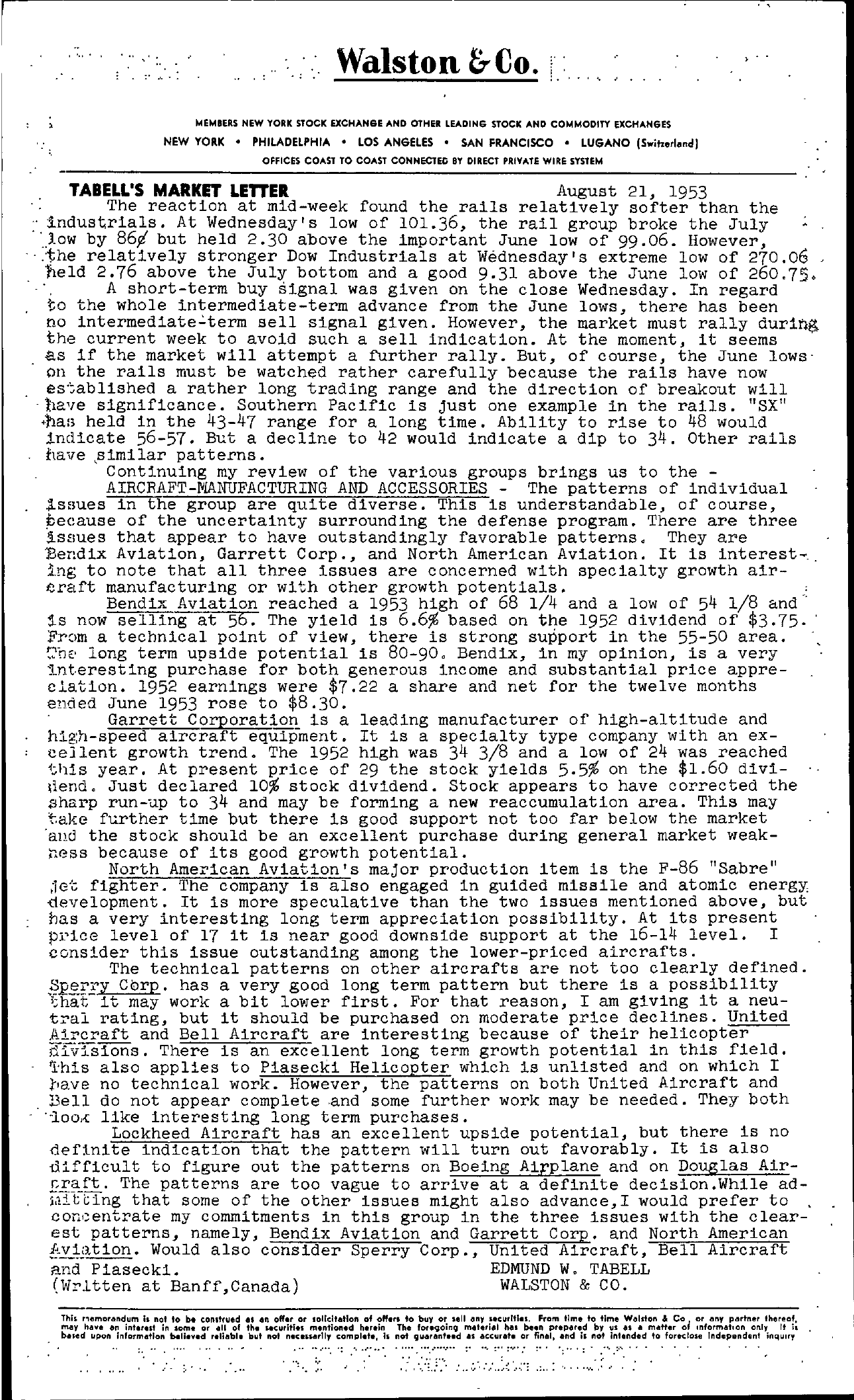 I——– . ;' …. Walston &Co. 1. MEMBERS NEW YORK STOCK EXCHANGE AND OTHER LEADING STOCK AND COMMODITY EXCHANGES NEW YORK PHILADELPHIA LOS ANGELES SAN FRANCISCO LUGANO (Switz.rland) OFFICES COAST TO COAST CONNECTEG BY DIRECT PRIYATE WIRE SYSTEM TABELL'S MARKET LETTER August 21, 1953 The reaction at mid-week found the rails relatively softer than the .. industrials. At Wednesday's low of 101.36, the rail group broke the July . ..low by 861 but held 2.30 above the important June low of 99.06. However, the relatively stronger Dow Industrials at Wednesday's extreme low of 270.06 held 2.76 above the July bottom and a good 9.31 above the June low of 260.75. ' . A short-term buy signal was given on the close Wednesday. In regard to the whole intermediate-term advance from the June lOWS, there has been no intermediateterm sell signal given. However, the market must rally durina tho current week to avoid such a sell indication. At the moment, it seems as if the market will attempt a further rally. But, of course, the June lows' on the rails must be watChed rather carefully because the rails have now eS'ablished a rather long trading range and the direction of breakout will . have significance. Southern Pacific is Just one example in the rails. SX hail held in the 43-47 range for a long time. Ability to rise to 48 would indicate 56-57. But a decline to 42 would indicate a dip to 34. Other rails have ,similar patterns. Continuing my review of the various groups brings us to the – AIRCRAFT-ffiNUFACTURING AND ACCESSORIES – The patterns of individual lssues in the group are quite diverse. This is understandable, of course, eeause of the uncertainty surrounding the defense program. There are three '-sEllies that appear to have outstandingly favorable patterns, They are BendiX Aviation, Garrett Corp., and North American Aviation. It is interest-.. iDE; to note that all three issues are concerned with speCialty growth air- .craft manufacturing or with other growth potentials. , Bendix Aviation reached a 1953 high of 68 1/4 and a low of 54 1/8 and is now selling at 56. The yield is 6.6 based on the 1952 dividend of 3.75. From a technical paint of view, there is strong support in the 55-50 area. h' long term upside potential is 80-90. BendiX, in my opinion, is a very 'int.eresting purchase for both generous income and substantial price appre- cia.tion. 1952 earnings were 7.22 a share and net for the twelve months ended June 1953 rose to 8.30. . Garrett Corporatio is a leading manufacturer of high-altitude and high-speed aircraft equipment. It is a speCialty type company with an ex- cellent growth trend. The 1952 high was 34 3/8 and a low of 24 was reached th1s year. At present price of 29 the stock yields 5.5 on the 1.60 divi- Iiend. Just declared 10 stock dividend. Stock appears to have corrected the sharp run-up to 34 and may be forming a new reaccumulation area. This may t.ake further time but there is good support not too far below the market 'and the stock should be an excellent purchase during general market weak- ness because of its good growth potential. North American Aviation's major production item is the F-86 Sabre ;1e'c fighter. The company is also engaged in guided missile and atomic energy Qevelopment. It is more speculative than the two issues mentioned above, but nas a very interesting long term appreciation possibility. At its present price level of 17 it is near good downside support at the 16-14 level. I consider this issue outstanding among the lower-priced aircrafts. The technical patterns on other aircrafts are not too clearly defined. EeFFY Corp. has a very good long term pattern but there is a possibility l;hat it may work a bit lower first. For that reason, I am giving it a neutral rating, but it should be purchased on moderate price declines. United Aircraft and Bell Aircraft are interesting because of their helicopter divisions. There is an excellent long term growth potential in this field. his also applies to Piasecki Helicopter which is unlisted and on which I ,ave no technical work. However, the patterns on both United Aircraft and Bell do not appear complete and some further work may be needed. They both 'loo,. like interesting long term purchases. Lockheed Aircraft has an excellent upside potential, but there is no Definite indication that the pattern will turn out favorably. It is also uifficult to figure out the patterns on Boeing Airplane and on Douglas Air- frft. The patterns are too vague to arrive at a definite decision.While ad- jait t;ing that some of the other issues might also advance, I would prefer to con,entrate my commitments in this group in the three issues with the clear- est patterns, namely, Bendix Aviation and Garrett Corp. and North American vll.tion. Would also conSider Sperry Corp., United Aircraft, Bell Aircraft and Piasecki. EDMUND W. TABELL (Wr.Ltten at Banff,Canada) WALSTON & CO. Thi, r,emorandum II not to 1M construed as an off.r or loUdtatlon of offen to buy or lell any lecurltles. From time to time Walston & Co, or any partner thereof, may have an int.,est in lotne or an of the securities m.ntion.d h.r.in The for'90inQ mat.rlal hal been prepared by loll as a matter of Information only It h baled upon Information beli.ved r.liabl. but not n.cuwrlly compl.t., II not Quarantd as accurat. or final, and is not intanded to foreclose Independent inqUiry .. . .. ………………. …. .. ……. ,. '''' , . . .' ; .' ; ' ; ' .; , . ;. '. . .', .'.'.'-'. …'. …; …..; … ', ……. .'