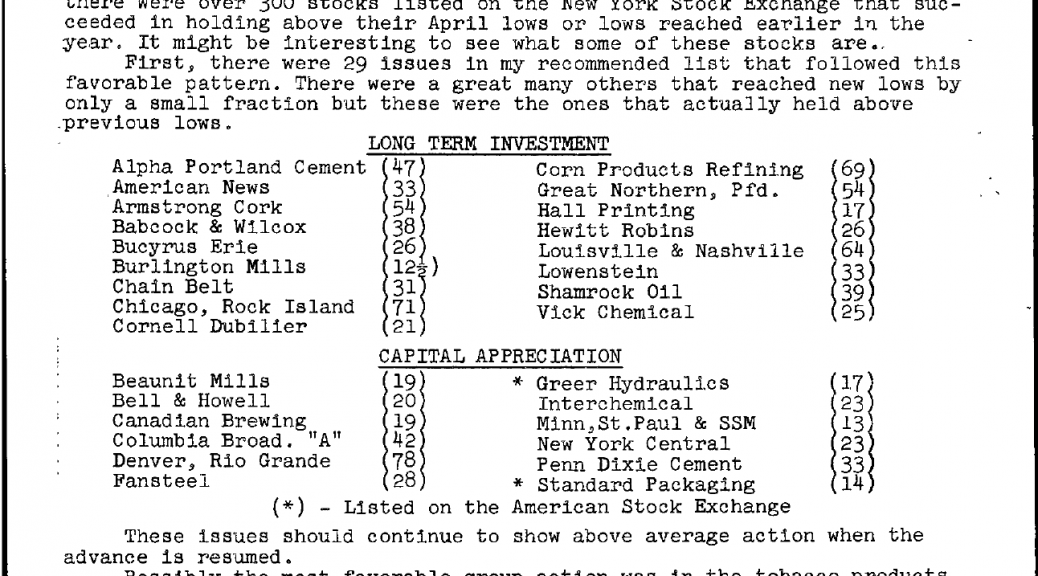 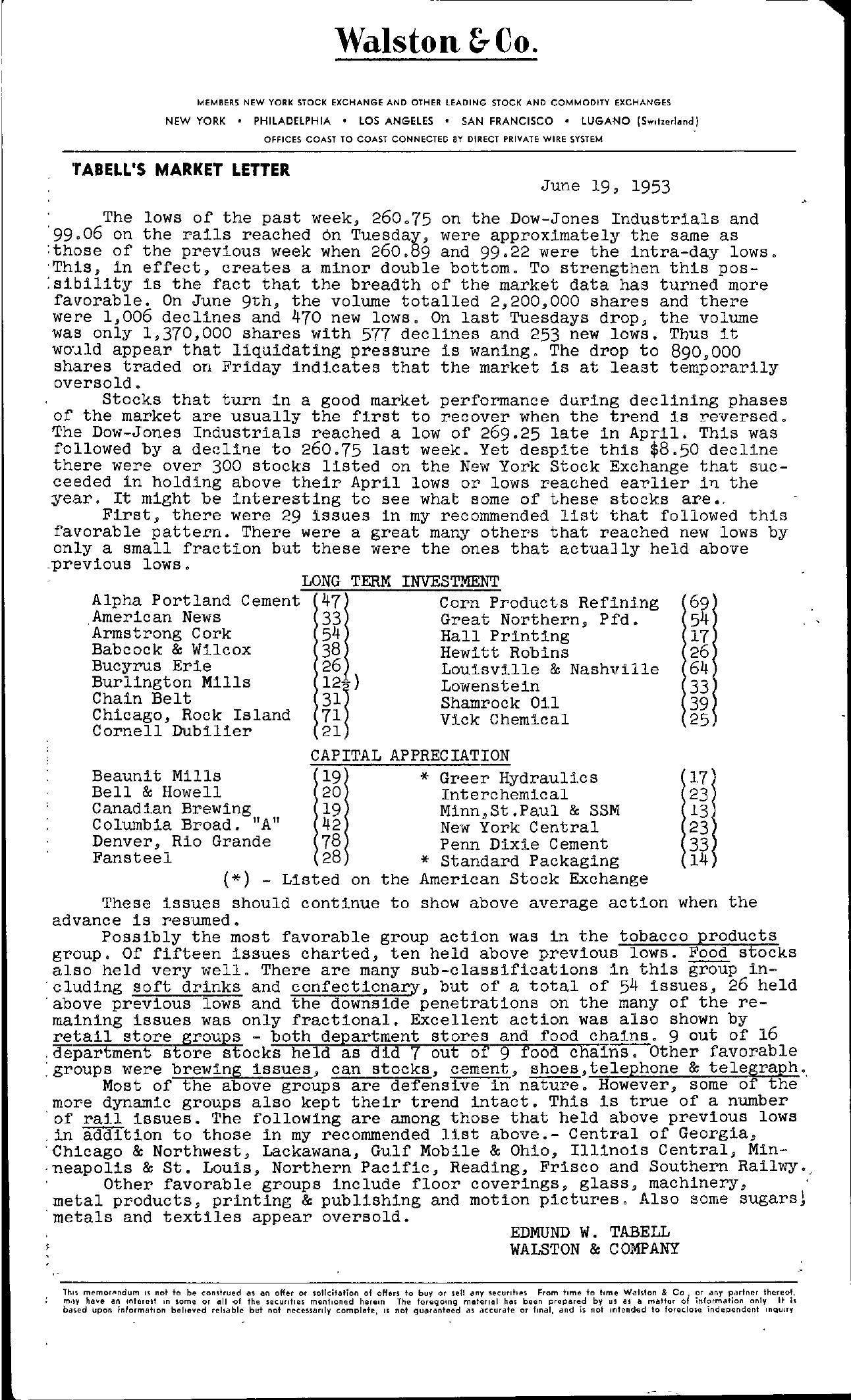 Walston &- Co. MEMBERS NEW YORK STOCK EXCHANGE AND OTHER LEADING STOCK AND COMMODITY EXCHANGES NEW YORK PHILADELPHIA LOS ANGELES SAN FRANCISCO LUGANO (Sw,t,ld) OFFICES COAST TO COAST CONNECTED BY DIRECT PRIVATE WIRE SYSTEM UBELL'S MARKET LETTER June 19, 1953 The lows of the past week, 260.75 on the Dow-Jones Industrials and '99.06 on the rails reached on Tuesday, were approximately the same as those of the previous week when 260.89 and 99.22 were the intra-day lows. 'This, in effect, creates a minor double bottom. To strengthen this pos- sibility is the fact that the breadth of the market data has turned more faorable. On June 9h, the volume totalled 2,200,000 shares and there were 1,006 declines and 470 new lows. On last Tuesdays drop, the volume was only 1,370,000 shares with 577 declines and 253 new lows. Thus it wO'.lld appear that liquidating pressure is waning. The drop to 890,000 shares traded on Friday indicates that the market is at least temporarily oversold. Stocks that turn in a good market performance during declining phases of the market are usually the first to recover when the trend is reversed. The Dow-Jones Industrials reached a low of 269.25 late in April. This was followed by a decline to 260.75 last week. Yet despite this 8.50 decline there were over 300 stocks listed on the New York Stock Exchange that suc- ceeded in holding above their April lows or lows reached ealier in the year. It might be interesting to see what some of these stocks are . First, there were 29 issues in my recommended list that followed this faorable pattern. There were a great many others that reached new lows by only a small fraction but these were the ones that actually held above .previous lows. LONG TERM INVESTMENT Alpha Portland Cement American News 'Armstrong Cork Babcock & Wilcox Bucyrus Erie Burlington Mills Chain Belt Chicago, Rock Island Cornell Dubilier 47 33 54 38 26 12-) 31 171 21 Corn Products Refining Great Northern, Pfd. Hall Printing Hewitt Robins Louisville & Nashville Lowenstein Shamrock Oil Vick Chemical 69 54 17 26 64 33 39 25 CAPITAL APPRECIATION Beaunit Mills 19 Greer Hydraullcs Bell & Howell 20 Interchemical Canadian Brewing 19 Minn,St.Paul & SSM Columbia Broad. A 42 New York Central Denver, Rio Grande Fansteel 78 28 Penn Dixie Cement Standard Packaging () – Listed on the American Stock Exchange 17 23 13 23 33 14 These issues should continue to show above average action when the advance is resumed. Possibly the most favorable group action was in the tobacco products goup. Of fifteen issues charted, ten held above previous lows. Food stocks also held very well. There are many sub-classifications in this group in'cluding soft drinks and confectionary, but of a total of 54 issues, 26 held 'above previous lows and the downside penetrations on the many of the remaining issues was only fractional. Excellent action was also shown by retail store groups – both department stores and food chains. 9 out of 16 ,department store stocks held as did 7 out of 9 food chains. Other favorable groups were brewing issues, can stocks, cement, shoes,telephone & telegraph., Most of the above groups are defensive in nature. However, some of the more dynamic groups also kept their trend intact. This is true of a number 'of rail issues. The following are among those that held above previous lows ,in addition to those in my recommended list above.- Central of Georgia, 'Chicago & Northwest, Lackawana, Gulf Mobile & OhiO, Illinois Central, Min- .neapolis & St. Louis, Northern Pacific, Reading, Frisco and Southern Railwy. Other favorable groups include floor coverings, glass, machinery, metal products, printing & publishing and motion pictures. Also some sugars1 'metals and textiles appear oversold. EDMUND W. TABELL WALSTON & COMPANY Thl memorAndum IS not to be construed as an offer or solicittion of offers to buy or sell ony sec UTI ties From time to lime Wahlon & Co , or any partner thereof, m,IY have an Intor!!st In some or all -of tile securities mentioned lIereln The foregOing material lIa5 been prepared by us as II mattor of information only It is based upon information beheved rehable but not necessarily complete, IS not guaranteed as accurate or final, and is not Int&nded to foreclose independent InqUiry