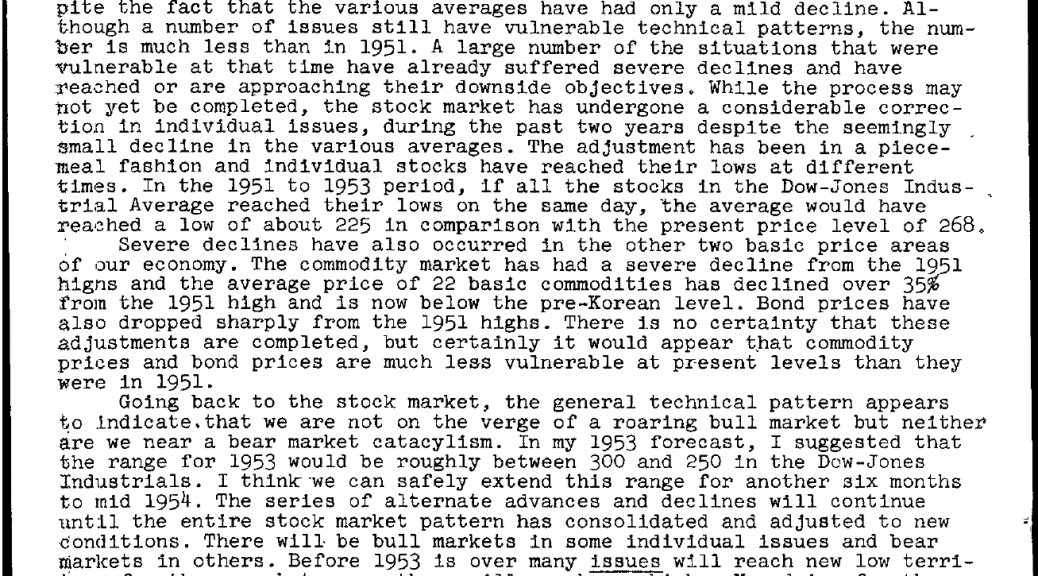 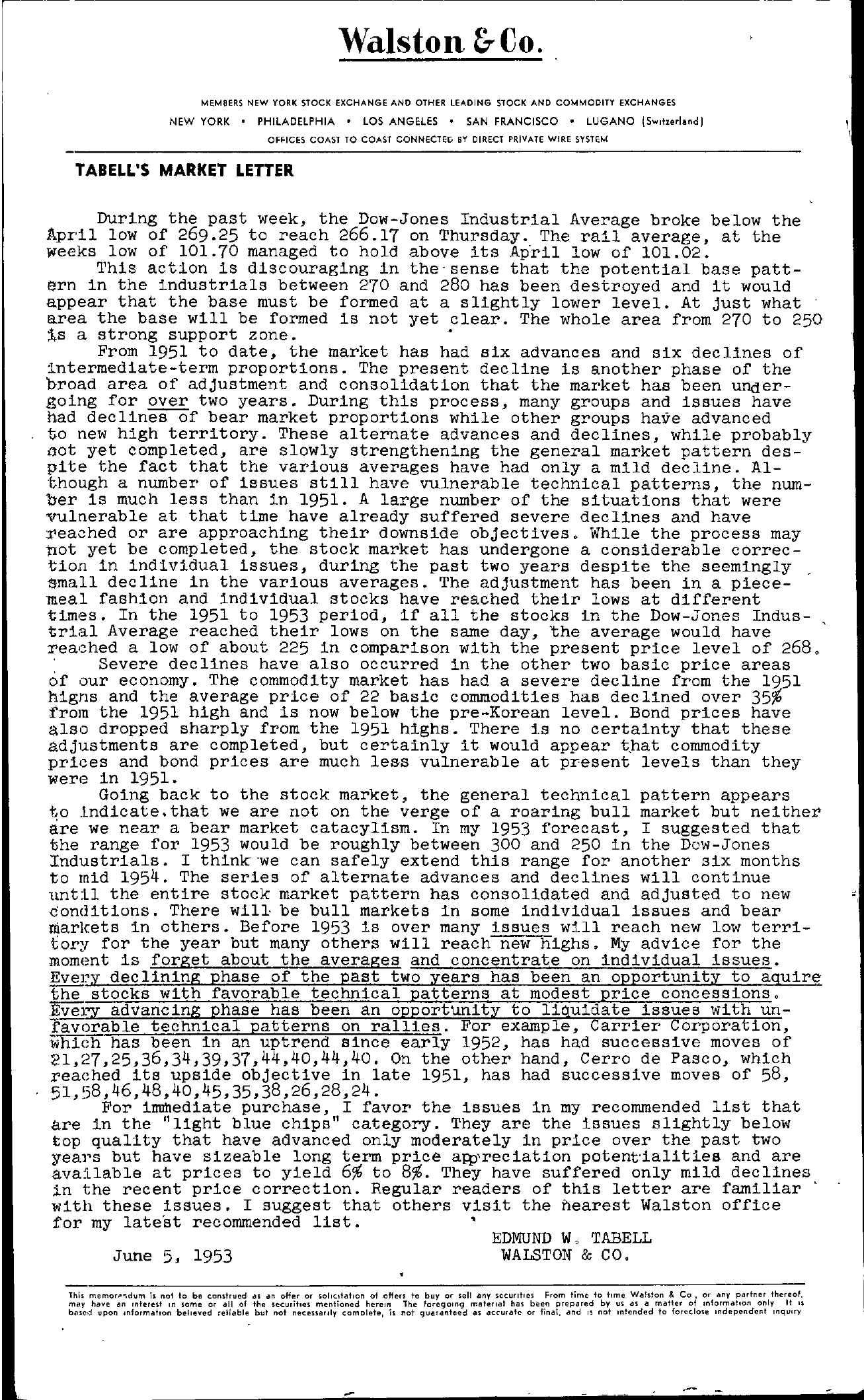 — – – – – – – – – – – – – – – – – – – – – – – – – – – – – Walston &- Co. MEMBERS NEW YORK STOCK EXCHANGE AND OTHER LEADING STOCK AND COMMODITY EXCHANGES NEW YORK PHILADELPHIA LOS ANGELES SAN FRANCISCO LUGANO ISwI.d..dl OFFICES COAST TO COAST CONNECTEG BY DIRECT PRIVATE WIRE SYSTEM TAB ELL'S MARKET LETTER I I, During the past week, the Dow-Jones Industrial Average broke below the April low of 269.25 to reach 266.17 on Thursday. The rail average, at the weeks low of 101.70 managed to hold above its April low of 101.02. This action is discouraging in thesense that the potential base patt- ern in the industrials between 270 and 280 has been destroyed and it would appear that the base must be formed at a slightly lower level. At just what area the base will be formed is not yet clear. The whole area from 270 to 250 s a strong support zone. From 1951 to date, the market has had six advances and six declines of intermediate-term proportions. The present decline is another phase of the broad area of adjustment and consolidation that the market has been uncter- going for two years. During this process, many groups and issues have had declines of bear market proportions while other groups have advanced to new high territory. These alternate advances and declines, while probably aot yet completed, are slowly strengthening the general market pattern des- pite the fact that the various averages have had only a mild decline. Al- though a number of issues still have vulnerable technical patterns, the num- ber is much less than in 1951. A large number of the situations that were vulnerable at that time have already suffered severe declines and have eahed or are approaching their downside objectives. While the process may not yet be completed, the stock market has undergone a considerable correc- tion in individual issues, during the past two years despite the seemingly Small decline in the various averages. The adjustment has been in a piece- meal fashion and individual stocks have reached their lows at different times. In the 1951 to 1953 period, if all the stocks in the Dow-Jones Indus- trial Average reached their lows on the same day, the average would have reached a low of about 225 in comparison with the present price level of 268. . Severe declines have also occurred in the other two basic price areas of our economy. The commodity market has had a severe decline from the 1951 higns and the average price of 22 basic commodities has declined over 35 from the 1951 high and is now below the pre-Korean level. Bond prices have also dropped sharply from the 1951 highs. There is no certainty that these adjustments are completed, but certainly it would appear t,hat commodity priees and bond prices are much leas vulnerable at pr-esent levels than they were in 1951. Going back to the stock market, the general technical pattern appears to .lndicate.that we are not on the verge of a roaring bull market but neither are we near a bear market catacylism. In my 1953 forecast, I suggested that the range for 1953 would be roughly between 300 and 250 in the Dew-Jones Industrials. I thinkwe can safely extend this range for another six months to mid 1954. The series of alternate advances and declines will continue untll the entire stock market pattern has consolidated and adjusted to new conditions. There will, be bull markets in some individual issues and bear markets in others. Before 1953 is over many issues will reach new low terri- tory for the year but many others will reach new highs, My advice for the moment is forget about the averages and concentrate on individual issues. Every declining phase of the past two years has been an opportunity to aguire the stocks with favorable technical patterns at modest price concessions. Every advancing phase has been an opportunity to liquidate issues with un- favorable technical patterns on rallies. For example, Carrier Corporation, ilhieh has been in an uptrend since early 1952, has had successive moves of 21,;'7,25,36,34,39,37,44,40,44,40. On the other hand, Cerro de Pasco, which reaehed its upside objective in late 1951, has had successive moves of 58, 51,58,46,48,40,45,35,38,26,28,24. For immediate purchase, I favor the issues in my recommended list that are in the light blue chips category. They are the issues slightly below top quality that have advanced only moderately in price over the past two yeal's but have sizeable long term price all'reciation potent'ialities and are avaLlable at prices to yield 6 to 8. They have suffered only mild declines in the recent price correction. Regular readers of this letter are familiar with these issues. I suggest that others visit the hearest Walston office for my latest recommended list. ' EDMUND W, TABELL June 5, 1953 WALSTON & CO. ' This memor.. ,dum i not to be COnltrued /IS /In oHer or solICItation of offers to buy or sell any StlCUrltl(!S From time to time Waldon & Co, or ny prtner therllof, mollV havll an rntllret In !lome or III of the securitres mentioned herein The foregOing material ha!l been prepared by us I!I a mattllT of IOformalron only It 1 bened upon rnformaiFon believed reliable but not necessarrly comDlete, is not guardoteed as CCUIltc or finat, clod IS not mtended to forllcloe Independent Inqurry