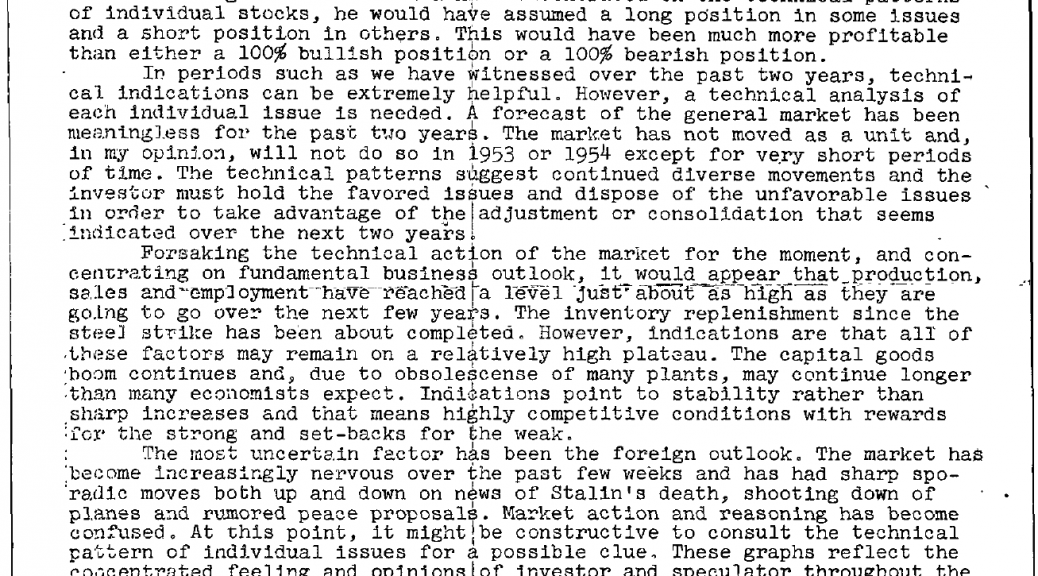 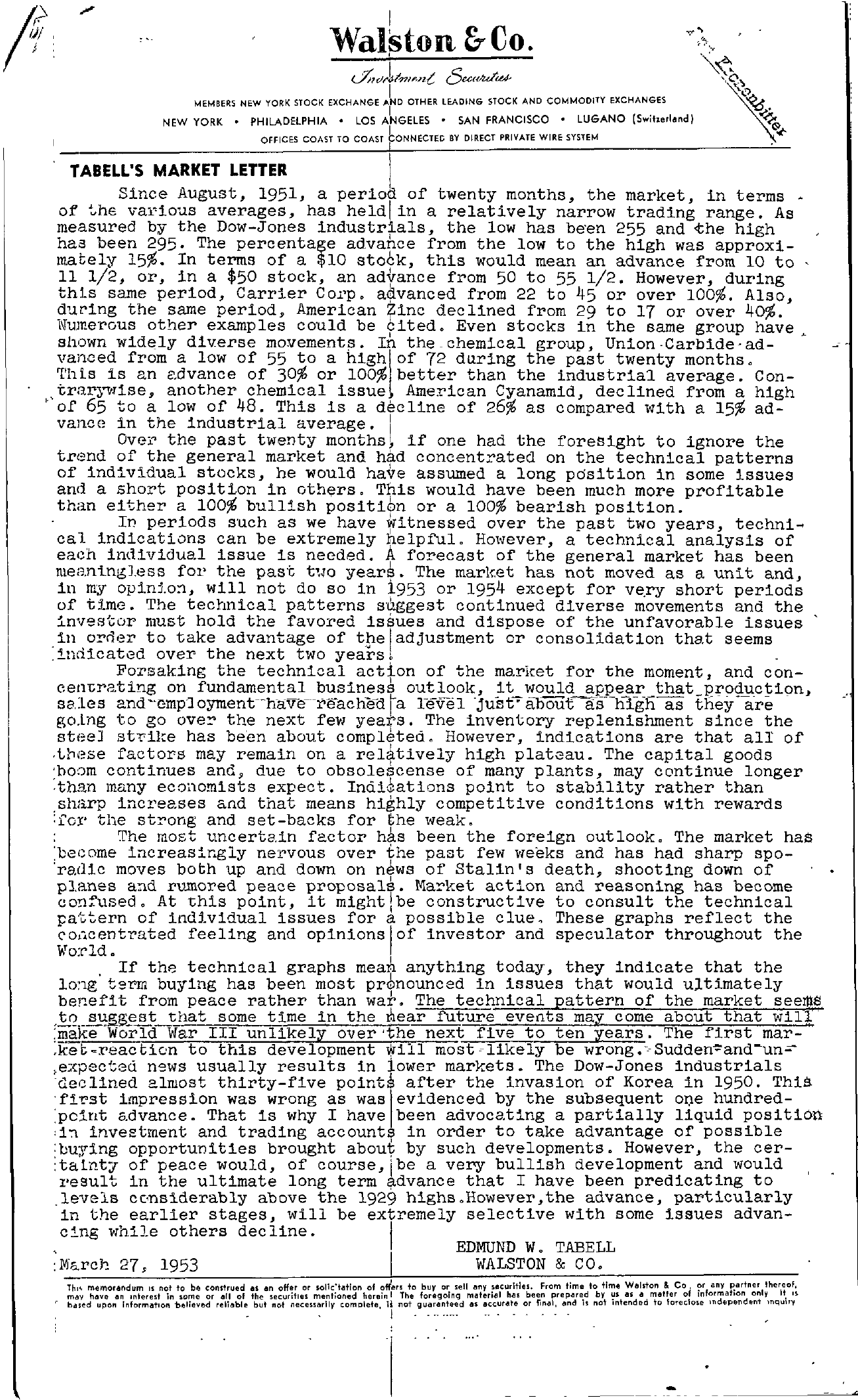 I Walston &Co. t'l('1/-'11Int DuuJu/iM– I MEMBERS NEW YORK STOCK EXCHANGE AND OTHER LEADING STOCK AND COMMODITY EXCHANGES AGELESNEW YORK PHILADELPHIA LOS SAN FRANCISCO LUGANO (Swit,ld) TAB Ell'S MARKET OFFICES COAST TO COAST bONNECTEC BY DIRECT PRIVATE WIRE SYSTEM ! lETTER I Since August, 1951, a period of twenty months, the market, in terms of h var-ious averages, has heIdi in a relatively narrow trading range. As measured by the Dow-Jones industrials, the low has be'en 255 and -the high has been 295. The percentae advance from the low to the high was approximately 15. In terms of a 10 stock, this would mean an advance from 10 to 11 1/2, or, in a 50 stock, an advance from 50 to 55 1/2. However, during this same period, Carrier C01'p. avanced from 22 to 45 or over 100. Also, duing the same period, American inc declined from 29 to 17 or over 40. Numerous other examples could be ited. Even stocks in the same group have. shown widely diverse movements. In the.chemical group, UnionCarbide-advanced from a low of 55 to a high of 72 during the past twenty months. -' This is an e.dvance of 30 or 100 better than the industrial average. Con- trarJlise, another chemical issue, American Cyanamid, declined from a high 'of 65 to a low of 48. This is a decline of 26 as compared with a 15 ad- vance in the industrial average. I Over the past twenty months, if one had the foresight to ignore the tr(md of the general market and had concentrated on the technical patterns of individual stocks, he would have assumed a long position in some issues and a short position in others. This would have been much more profitable than either a 100 bullish position or a 100 bearish position. In periods such as we have 1I (fitnessed over the past two years, techni cal indications can be extremely elpful. However, a technical analysis of ea(h individual issue is needed. A forecast of the general market has been mell.ningless for the past tw year. The market has not moved as a unit and, in my opini.o'l, will not do so in 1953 or 1954 except for ve.ry short periods of time. The technical patterns sggest continued diverse movements and the investor must hold the favored issues and dispose of' the unfavorable issues .in orner to take advantage of tpeladJustment or consolidation that seems .indicated over the next two years t . Forsaking the technical action of the maricet for the moment, and coneem;rating on fundamental businessI outlook, it would appear that production, s8,les and –cmp oyment–have-'reachea la leve1 'Just Moui; as–higfi as they -are go.lng to go ave, the next fe\'/ years. The inventory replenishment since the steeJ stt'ile has been about complted. However, indications are that all of ,these factors may remain on a relittive1y high plateau. The capital goods 'boom continues and, due to obsolecense of many plants, may continue longer than many economists expect. Inciiations point to stability rather than sharp incree.ses and that means highly competitive conditions with rewards fo!' the strong and set-backs for the weak. The mOf,t l.mcert8,in factor has been the foreign outlook. The market haS beeome increaslr.gly nervous over the past few weeks and has had sharp spo- 'radic moves both up and down on news of Stalin's death, shooting down of planes and rumored peace proposalS. Ma,ket action and reasoning has become confusedo At this pOint, it mightibe constructive to consult the technical pattern of indlvidual issues for a possible clue These graphs reflect the cOucentrated feeling and oPinionslof investor and speculator throughout the v.'orld. If the technical graphs meaA anything today, they indicate that the lO1g' trm buying has been most prnounced in issues that would ultimately benefit from peace rather than war. The technical pattern of the market seemS .t'2. sge;.!'st that some time in the thear future events may come about that will maJ-ce World War III unlikely over 'the next five to ten years. The first mar- ket-reaction to this development Will mostlikely be wrong.cSuddenand-un ,expected n9WS usually results in lower markets. The Dow-Jones industrials I'deelined almost thirty-five points after the invasion of Korea in 1950. ThiS. 'fi't'st impression was wrong as was evidenced by the subsequent ol).e hundred- pcint o.dvance. That is why I have been advocating a partially liquid positiot); i inveEtment and trading accounts in order to take advantage of possible buying opportunities brought about by such developments. However, the cer- tatnty of peace would, of course,ibe a very bullish development and would I'esult in the ultimate long term advance that I have been predicating to levels cc.nsiderably above the 1929 highs However ,the advance, particularly in the earlier stages, will be extremely selective with some isaues advan- cing while others decline. j EDMUND W. TABELL Narch 27, 1953 I WALSTON & CO. TIll memorandum IS not to be construed as an offer or solic.!Ition of offers to buy or sell any ulcurltles, From time to time Willdon & Co, r any artner ther(lof, mel'! have an Interest in some or all of the ecuritles mentioned herein I The foregoing Material has been prepare;d by 1;1 al a matter of information only It, I bused upon information believed reliable but not necessarily c.omDlete, is not guaranteed 055 accurae or final, …nd IS not Intended to foreclose Independent IMqUII,/ – . I .. .. . , – .t'