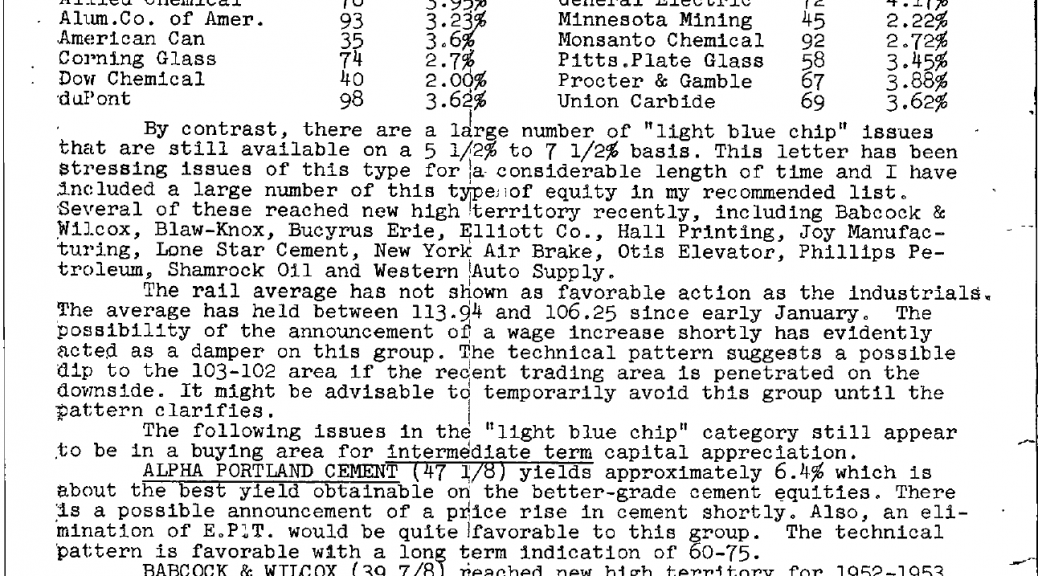 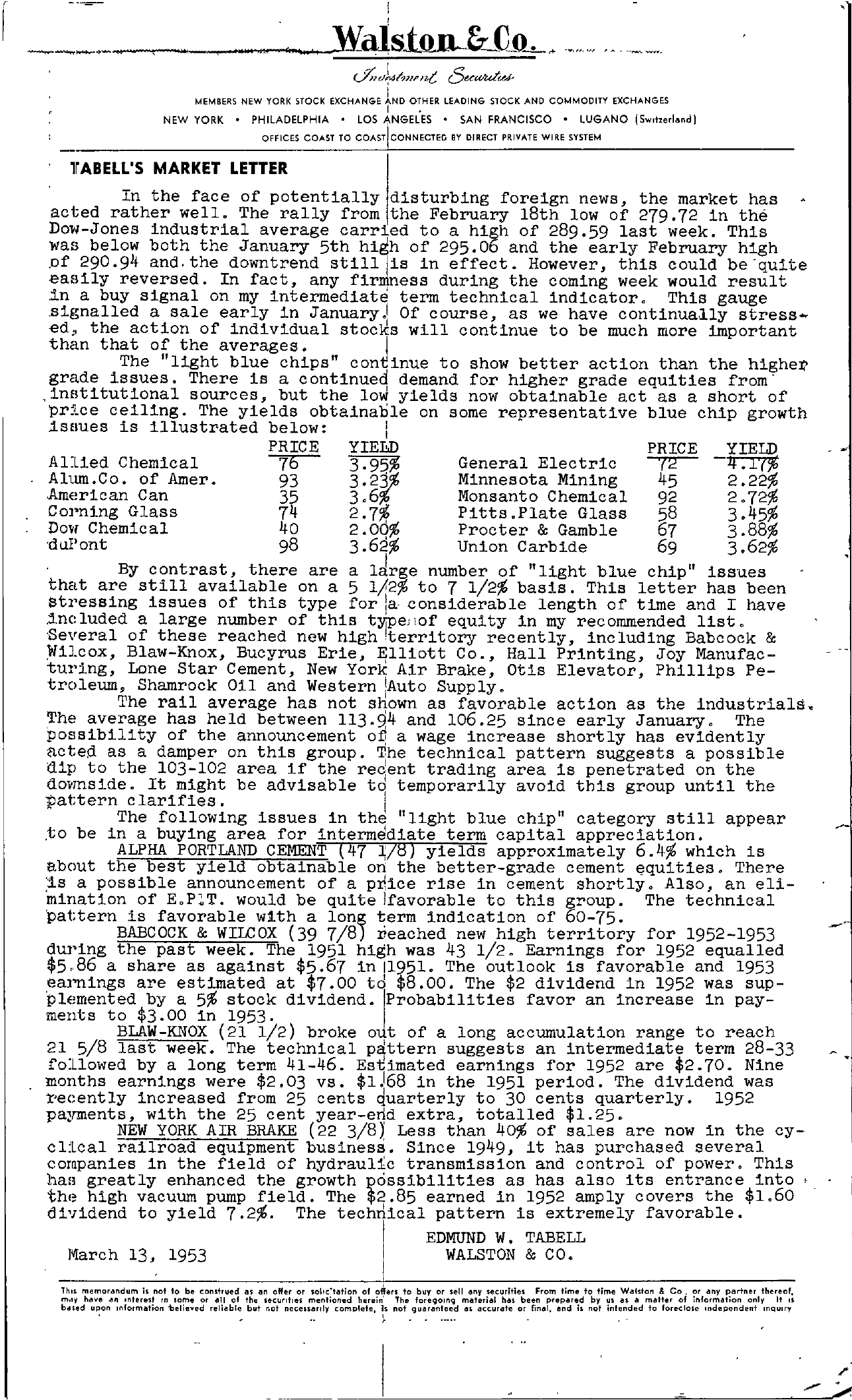 I, , r WaIsiOJl-.&. COill H …. N. '.' , … …….. '. .Y,J4tmn.c Decu/utuJ- MEMBERS NEW YORK STOCK EXCHANGE iINC OTHER LEADING STOCK AND COMMODITY EXCHANGES NEW YORK PHILADELPHIA LOS ANGELES SAN FRANCISCO LUGANO ISw,t,.,IdJ OFFICES COAST TO cOAsrlcoNNECTEC BY OIRECT PRIVATE WIRE SYSTEM lrABELL'S MARKET LETTER In the face of potentially disturbing foreign news, the market has acted rather well. The rally from the February 18th low of 279.72 in the DOI-Jones industrial average carried to a high of 289.59 last week. This wan below both the January 5th high of 295.06 and the early February high pf 290.94 and-the downtrend still liS in effect. However, this could be-quite eanily reversed. In fact, any firmness during the coming week would result n a buy signal on my intermediate term technical indicator. This gauge !neCilferviunJsO!itieWohemt;!lp!- thtn that of the averages. j The light blue chips continue to show better action than the higher grade issues. There is a continued demand for higher grade equities from,inf!titutional sources, but the lo yields now obtainable act as a short of price Sf!ues cei is l ing. illus The trat yield ed be s ob low t ai n abil e on some representative blue chip growth AIUed Chemical Alum.Co. of Amer. American Can C01'ning Glass DOI Chemical -duPont PRICE 76 93 35 74 40 98 YIEllD 3.95 3.23 3.6 2.7 2.06 3.62 General Electric Minnesota Mining Monsanto Chemical Pitts.Plate Glass Procter & Gamble Union Carbide PRICE ,(2 45 92 58 67 69 YIELD 4.I'7 2.22 2.72 3.45 3.88 3.62 By contrast, there are a IJrge number of light blue chip issues that are still available on a 5 1/2 to 7 1/2 basis. This letter has been stressing issues of this type for la- considerable length of time and I have ncluded a large number of this tYjPeJlof equity in my recommended list. -Several of these reached new high ,territory recently, including Babcock & jlilcox, Blaw-Knox, Bucyrus Erie, Ellliott Co., Hall Printing, Joy Manufac- turlng, Lone Star Cement, New York Air Brake, Otis Elevator, Phillips Pe- troleum, Shamrock Oil and Western Auto Supply. The rail average has not shown as favorable action as the industrials. ThE! average has held between 113.94 and 106.25 since early January. The pOElsiblllty of the announcement o a wage increase shortly has evidently acteo. as a damper on this group. he technical pattern suggests a possible ;ndeIfoiig ed;is!erdem;ryaistbeduilhhe pattern clarifies. I The following issues in the light blue chip category still appear ,to be in a buying area for intermediate term capital appreciation. ALPHA PORTLAND CEMENT (47 78) yields approximately 6.4 which is about the best yield obtainable on the better-grade cement equities. There s a possible announcement of a pice rise in cement shortly. Also, an eli- 'mination of E.P1T. would be quite Ifavorable to this group. The technical 'pattern is favorable with a lon term indication of 60-75. BABCOCK & WILCOX (39 7/8) reached new high territory for 1952-1953 dUl'ing the past week. The 1951 high was 43 1/2. Earnings for 1952 equalled 5,,86 a share as against 5.67 in 11951. The outlook is favorable and 1953 ealings are estimated at 7.00 td 8.00. The 2 dividend in 1952 was sup- 'plemented by a 5 stock dividend.!probabilities favor an increase in pay- ments to 3.00 in 1953. BLAW-KNOX (21 1/2) broke out of a long accumulation range to reach 21 5/8 last week. The technical pattern suggests an intermediate term 28-33 fo110wed by a long term 41-46. Estimated earnings for 1952 are 2.70. Nine months earnings were 2.03 vs. 1.168 in the 1951 period. The dividend was t'eeently increased from 25 cents uarterly to 30 cents quarterly. 1952 payments, with the 25 cent year-end extra, totalled 1.25 NEW YORK AIR BRAKE (22 3/8) Less than 40 of sales are now in the cy- clIcal railroad equipment business. Since 1949, it has purchased several companies in the field of hydraulic transmission and control of power. This hall greatly enhanced the growth lossibilities as has also its entrance into, the high vacuum pump field. The lji.85 earned in 1952 amply covers the 1.60 dividend to yield 7.2. The technical pattern is extremely favorable. Jl'Jarch 13, 1953 EDMUND W. TABELL WALSTON & CO. TIm memQrandum is not to be construed as an offer or sollcfaHan of oHerl to buy or sell a.n)' securities From time to time Walston & Co, r any artner thereof, my ho!lve an Interest In some or 'III of the securities mentioned herein' The foregOing material has been prepared by us as a m'Jtter of ,nformatlon only It Il b.ned upon Information bl!lieved reli.llble but not necesulflly complete, Is not guaranteed ,n accurate or final, and is not intended to foreclose Independent inquiry ,