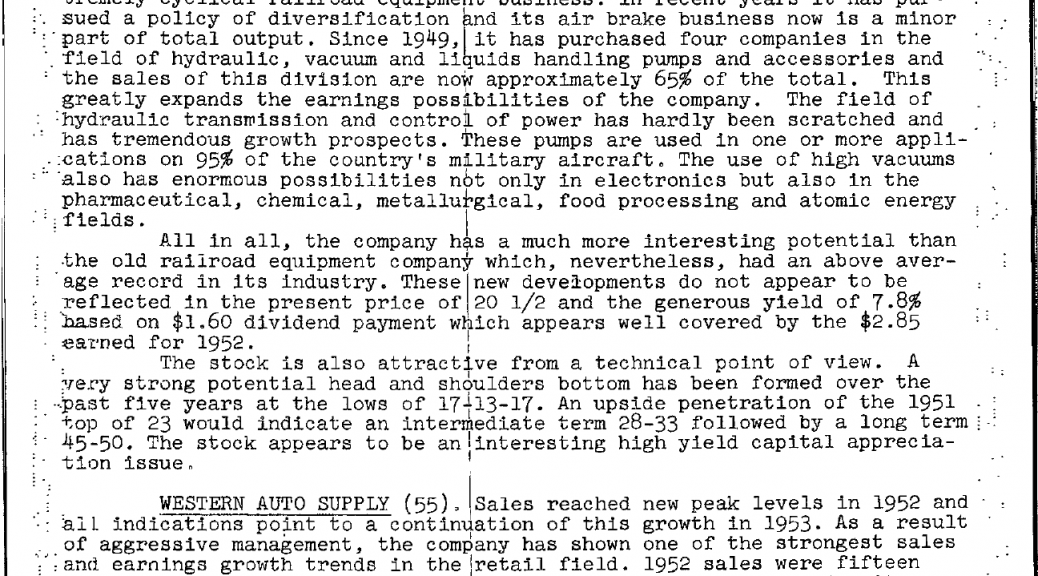 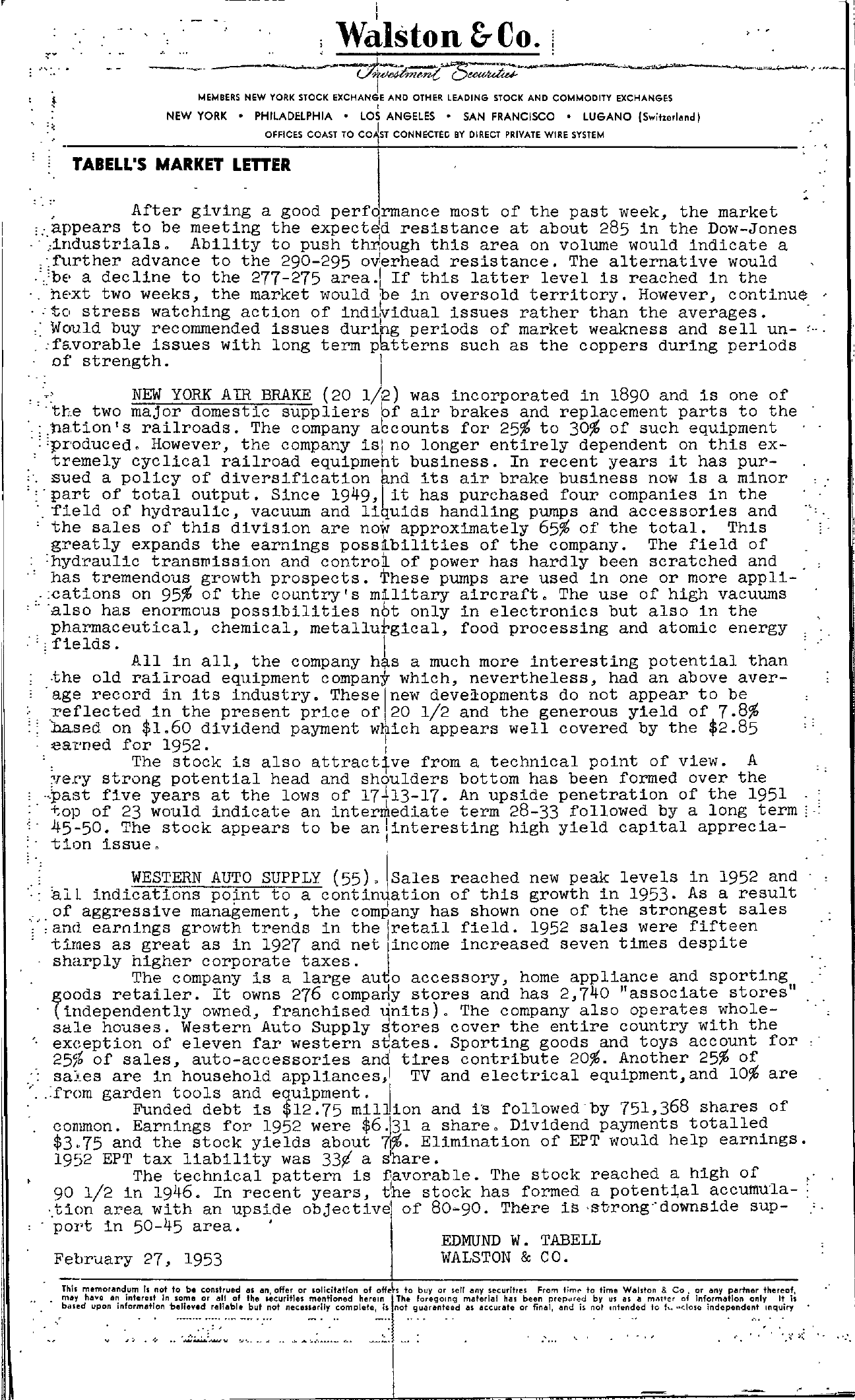 , …. .- '' i Walston &- Co. ' – – , —…….'.-(hl;';!–N'iC',;—–….–'-,—-,,-….,.–,' ,– I ,MEMBERS NEW YORK STOCK EXCHANGE AND OTHER LEADING STOCK AND COMMODITY EXCHANGES NEW YORK PHILADELPHIA LOS ANGELES SAN FRANCISCO LUGANO (Sw;t..,lond I COS,TOFFICES COAST TO CONNECTEC BY DIRECT PRIVATE WIRE SYSTEM , TABELL'S MARKET LETTER .. After giving a good performance most of the past week, the market ,,appears to be meeting the expectd resistance at about 285 in the Dow-Jones , , industrials. Ability to push thr,ough this area on volume would indicate a ,',further advance to the 290-295 overhead resistance. The alternative would '-,,'be' a decline to the 277-275 area.1 If this latter level is reached in the he'xt two weeks, the market would be in oversold territory. However, continue , to stress watching action of indiividual issues rather than the averages. ' ' Would buy recommended issues durihg periods of market weakness and sell un- , fa,vorable issues , of' strength. with long term pIatterns such as the coppers during periods , T' NEW YORK AIR BRAKE (20 1/2) was incorporated in 1890 and is one of the two major domestic suppliers 6f air brakes and replacement parts to the ,nation 1 s railroads. The company abcounts for 25 to 30 of such equipment 'produced. However, the company isi no longer entirely dependent on this ex- , tremely cyclical railroad equipmeht business. In recent years it has pur- sued a policy of diversification and its air brake business now is a minor 'part of total output. Since 1949,1 it has purchased four companies in the field of hydraulic, vacuum and liquids handling pumps and accessories and , the sales of this division are now approximately 65 of the total. This greatly expands the earnings posslbilities of the company. The field of hydraulic transroission and control of power has hardly been scratched and has tremendous growth prospects. These pumps are used in one or more appli- ,,cations on 95 of the cOlmtry' s military aircraft. The use of high vacuums ,– 'also has enormous possibilities nbt only in electronics but also in the pharmaceutical, 'fields. chemical, metalluIrgical, food processing and atomic energy All in all, the company hs a much more interesting potential than the old railroad equipment company which, nevertheless, had an above aver- 'age record in its industry. Theseinew deve20pments do not appear to be reflected in the present price of 20 1/2 and the generous yield of 7.8 'based on 1.60 dividend payment wfuich appears well covered by the 2.85 eat'ned for 1952. The stock is also attractive from a technical point of view. A lery strong potential head and shoulders bottom has been formed over the –,past five years at the lows of 17113-17. An upside penetration of the 1951 , -top of 23 would indicate an intermediate term 28-33 followed by a long term, ',' 45-50. The stock appears to be an linteresting high yield capital apprecia- tion issue I ,', , WESTERN AUTO SUPPLY (55). isales reached new peak levels in 1952 and , alL indications pOint to a continuation of this growth in 1953. As a result , of aggressive management, the company has shown one of the strongest sales ','; and earnings growth trends in the Iretail field. 1952 sales were fifteen , times as great as in 1927 and net lincome increased seven times despite sharply higher corporate taxes. The company is a large auto accessory, home appliance and sporting oods retailer. It owns 276 compariy stores and has 2,740 associate stores 11 tindependently owned, franchised units). The company also operates whole- sale houses. Western Auto Supply stores cover the entire country with the ., exeeption of eleven far western states. Sporting goods and toys account for 2596 of sales, auto-accessories and tires contribute 20. Another 25 of ' ', sai.es ,from are in household garden tools and eqa.pupiplimaenncte. s)I TV and electrical equipment, and 10 are ' Funded debt is 12.75 milion and is followed by 751,368 shares of CODon. Earnings for 1952 were 6.131 a share. Dividend payments totalled 3.75 and the stock yields about 71. Elimination of EPT would help earnings. 19;2 EPT tax liability was 331 a s'hare. The technical pattern is favorable. The stock reached a high of 90 1/2 in 1946. In recent years, t!he stock has formed a potental accutnU'la- ',tion area with an upside objective of 80-90. There is 'strongdownside sup- port in 50-45 area. EDMUND W. TABELL February 27, 1953 WALSTON & CO. I- Thil memorandum II not to b. construed as an, offer or lolldtlltlon of offe to buy or S(!I! any securities From lim to time Walston & Co. or any partner thereof, .. . may have an lnternt In some or aU of the .ecuritles mentioMd herein The 10r&goll1g material has been prcpured by IU as a miHtcr of information only It is -,t … .. b.ued upon information believed reliable but not necessarily comDlete, Is not guaranteed as accurate or final, 'Ind is not .ntended to h. dose independent Inquiry c . . . . . . . . . . . . . -. , , . ' , 1 . .. . …… ;…. . ..;…… .. ,- '-'- .. – – . … , '.., ,,.