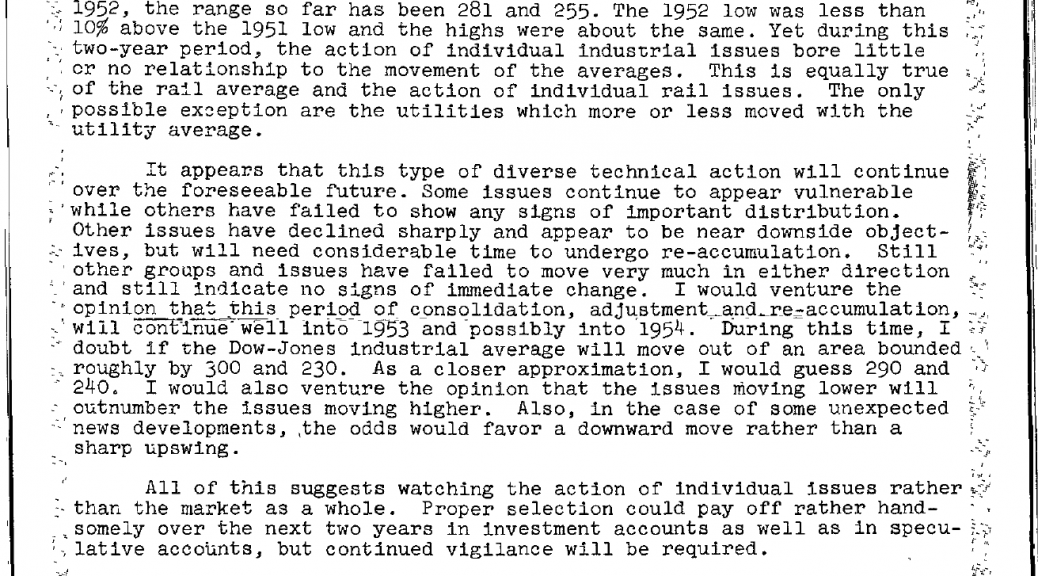 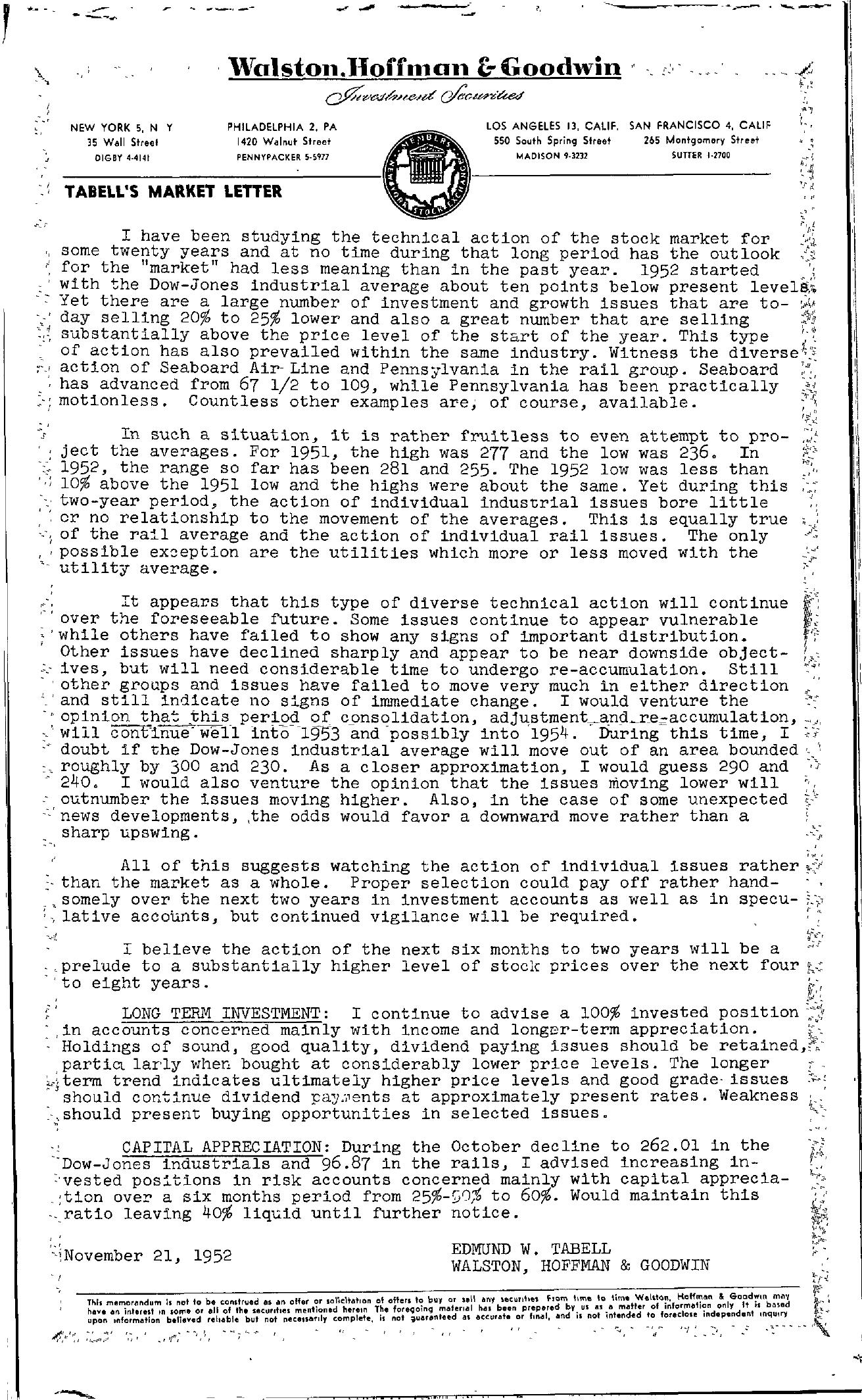 r —'- – —- \,., '. ———- . –.—– Wolston.Hoffnl0n & Goodwin – -' -, NEW YORK 5, N Y )5 Wall Streef DIGBY 4-4141 PHILADELPHIA 2, PA 1420 Walnut Street PENNYPACKER s-sm LOS ANGELES 13, CALIF. 550 South Spring Street MADISON 9-3232 SAN FRANCISCO 4, CALIF 265 Montgomery Street sunER 12700 , '' -; TABELL'S MARKET LETTER , -,, t't,! I have been studying the technical action of the stock market for some twenty years and at no time during that long period has the outlook ';;;, i for the market had less meaning than in the past year. 1952 started ' with the Dow-Jones industrial average about ten points below present levelS,;; – – Yet there are a large number of investment and growth issues that are to- -4, day selling 20 to 25 lower and also a great number that are substantially above the price level of the start of the year. selling This type ),,f;o ' of action has also prevailed within the same industry. Witness the diverse';; ,' action of Seaboard Air- Line and Pennsylvania in the rail group. Seaboard ;\ , has advanced motionless. from 67 1/ Countless 2 to 109, while other examples Pennsylvania has been pra are; of course, available. c ti cal l y ;;' I!. In such a Situation, it is rather fruitless to even attempt to pro- ,,/ ject the averages. For 1951, the high was 277 and the low was 236. In ,,, — 1952, the range so far has been 281 and 255. The 1952 low was less than ,, ', 10 above the 1951 low and the highs were about the same. Yet during this ', , two-year period, the action of individual industrial issues bore little ' or no relationship to the movement of the averages. This is equally true 'j,',' '–, of the rail average and the action of individual rail issues. The only , ,possible exeption are the utilities which more or less moved with the utility average. ; It appears that this type of diverse technical action will continue — over the foreseeable future. Some issues continue to appear vulnerable .- ; 'while others have failed to show any signs of important distribution. 'Co , Other issues have declined sharply and appear to be near downside object, ives, but will need considerable time to undergo re-accumulation. Still .! , , other groups and issues have failed to move very much in either direction ',' and still indicate no signs of immediate change. I would venture the ; ' opinion that this period of consolidation, adjustmentandreaccumulation, ' ,,' will continuit wen into -19'53 and -possibly into 1954. During this time, I ..,- — doubt if the Dow-Jones industrial average will move out of an area bounded '- , , roughly by 300 and 230. As a closer approximation, I would guess 290 and -, — 240. I would also venture the opinion that the issues nioving lower will t,– outnumber the issues moving higher. Also, in the case of some unexpected -' news developments, ,the odds would favor a downward move rather than a –, sharp upswing. ' — , r All of this suggests watching the action of individual issues rather ,;'i – than the market as a whole. Proper selection could payoff rather hand- ,somely over the next two years in investment accounts as well as in specu- ' , lative accounts, but continued vigilance will be required. f.;-, I believe the action of the next six months to two years will be a ,;J prelude to a substantially higher level of stocle prices over the next four ,- to eight years. ,, ft LONG TERM INVESTMENT I continue to advise a 100 invested position ',',,'it ,in accounts concerned mainly with income and 10ng8r-term appreciation. , Holdings of sound, good quality, dividend paying issues should be retained,t- partiCL larly when bought at considerably lower price levels. The longer , term trend indicates ultimately higher price levels and good grade, issues ';.c, should continue dividend pac;;,lents at approximately present rates. Weakness ,,' ' should present buying opportunities in selected issues. ', CAPITAL APPRECIATION During the October decline to 262.01 in the Dow-Jones industrials and 96.87 in the rails, I advised increaSing in'vested positions in risk accounts concerned mainly with capital apprecia,tion over a six months period from 25-00 to 60. Would maintain this 'ratio leaving 40 liquid until further notice. '-\November 21, 1952 EDMUND W. TABELL WALSTON, HOFFMAN & GOODWIN i.I'