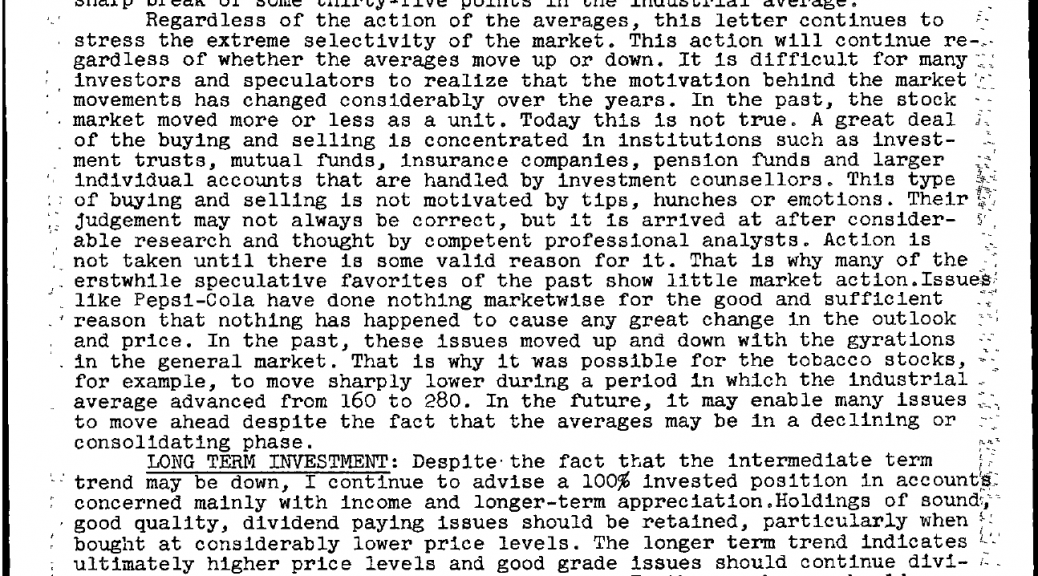 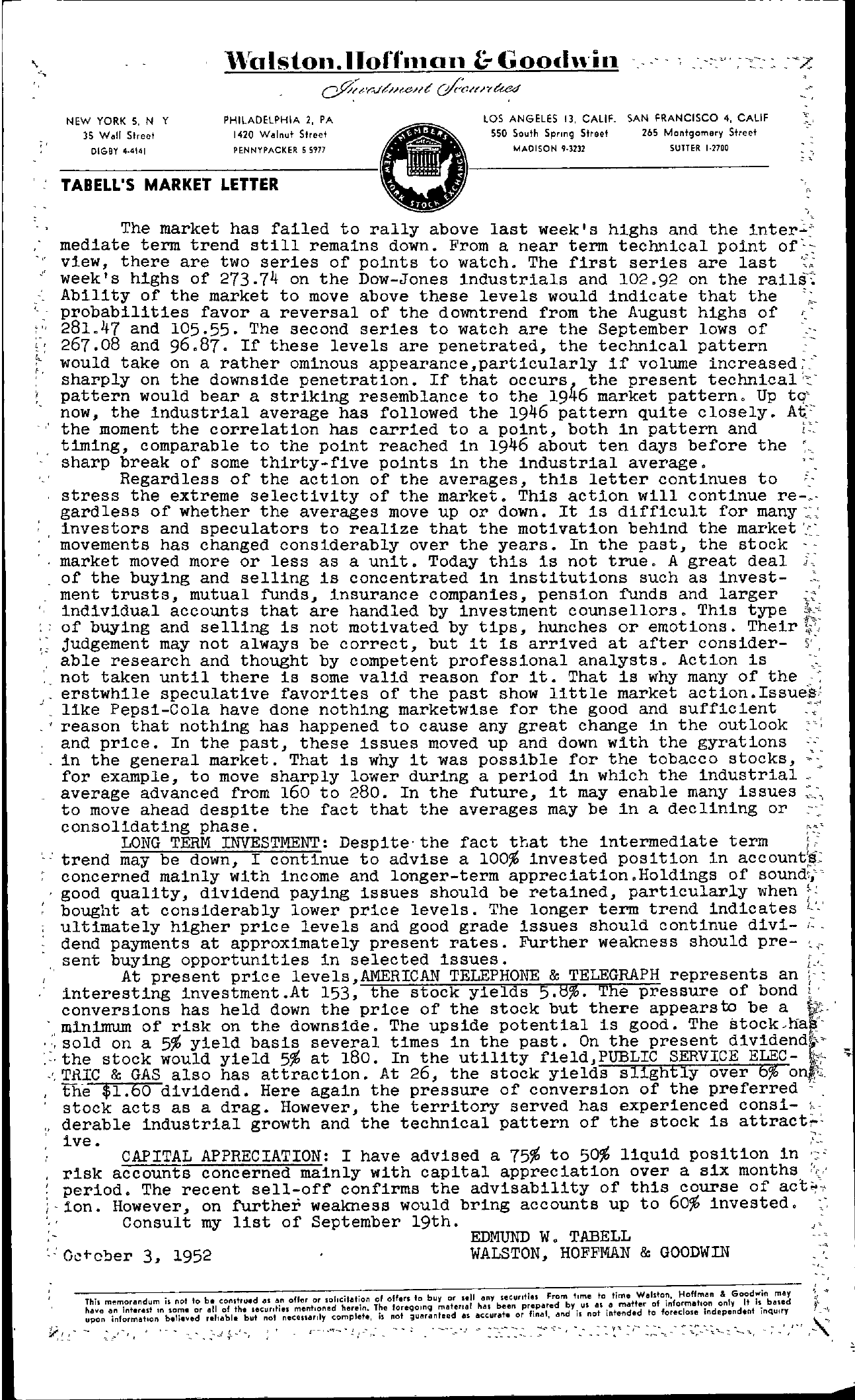 NEW YORK 5, N Y 3S WH Street DIGBY 4-4\41 ro lsion.lloffnl0n &- Good,,'in &/-'''',.J4N.eHt' ckct'ot'u.e' PHILADELPHIA 2, PA 1420 W!Ilnut Street PENNYPACKER 55917 LOS ANGELES 13, CALlF 550 South Spring Street MADISON. 93232 SAN FRANCISCO 4, CALIF 265 Montgomery Street SUTTER 12700 TAB ELL'S MARKET LETTER The market has failed to rally above last week's highs and the inter mediate term trend still remains down. From a near term technical point of view, there are two series of pOints to watch. The first series are last ', week's highs of 273.74 on the Dow-Jones industrials and 102.92 on the rails' Ability of the market to move above these levels would indicate that the i'..- probabilities favor a reversal of the downtrend from the August highs of ; 281.47 and 105.55. The second series to watch are the September lows of ;', 267.08 and 96.87. If these levels are penetrated, the technical pattern — ', would take on a rather ominous appearance,particularly if volume increased, sharply pattern on the downside penetration. If that would bear a striking resemblance to occurs the the 1946 ma present rket patt technic ern. Up atl ' now, the industrial average has followed the 1946 pattern quite closely. At' the moment the correlation has carried to a pOint, both in pattern and , timing, comparable to the point reached in 1946 about ten days before the ,', sharp break of some thirty-five points in the industrial average. Regardless of the action of the averages, this letter continues to – stress the extreme selectivity of the market. This action will continue re- ' gardless of whether the averages move up or down. It is difficult for many;; investors and speculators to realize that the motivation behind the market ','-, movements has changed considerably over the years. In the past, the stock market moved more or less as a unit. Today this is not true. A great deal of the buying and selling is concentrated in institutions such as invest- ment trusts, mutual funds, insurance companies, pension funds and larger individual accounts that are handled by investment counsellors. This type 1';–'.. of buying and selling is not motivated by tips, hunches or emotions. Their !l; ,; judgement may not always be correct, but it is arrived at after consider- S'-, , able research and thought by competent professional analysts. Action is ,', not taken until there is some valid reason for it. That is why many of the -; , erstwhile speculative favorites of the past show little market action. Issue, –, like Pepsi-Cola have done nothing marketWise for the good and sufficient ' ' reason that nothing has happened to cause any great change in the outlook and price. In the past, these issues moved up and down with the gyrations — in the general market. That is why it was possible for the tobacco stocks, for example, to move sharply lower during a period in which the industrial — average advanced from 160 to 280. In the future, it may enable many issues ,', to move ahead despite the fact that the averages may be in a declining or consolidating phase. .,-,' LONG TERM INVESTMENT Despite'the fact tt.at the intermediate term ;, ',-, trend may be down, I continue to advise a 100 invested position in accounts, – concerned mainly with income and longer-term appreciation .Holdings of sound, good quality, dividend paying issues should be retained, particularly when bought at considerably lower price levels. The longer term trend indicates i ultimately higher price levels and good grade issues should continue divi- , dend payments at approximately present rates. Further weakness should pre- ',,' sent buying opportunities in selected issues. r, , At present price levels,AMERICAN TELEPHONE & TELEGRAPH represents an i , interesting investment .At 153, the stock yields 5. 8. The pressure of bond !,' conversions has held down the price of the stock but there appears to be a l,i,' , minimum of risk on the downside. The upside potential is good. The stock Iia , ',sold on a 5 yield basis several times in the past. On the present dividendjk, , the stock would yield 5 at 180. In the utility field,PUBLIC SERVICE ELEC- ';;, ,', TflIC & GAS also has attraction. At 26, the stock yields slightly over 6 on t th-e 1.60 dividend. Here again the pressure of conversion of the preferred stock acts as a drag. However, the territory served has experienced consi- ,' ' derable industrial growth and the technical pattern of the stock is attract; e. CAPITAL APPRECIATION I have advised a 75 to 50 liquid position in '' , risk accounts concerned mainly with capital appreciation over a six months \. period. The recent sell-off confirms the advisability of this course of act. ;'ion. However, on further weakness would bring accounts up to 60 invested. ' Consult my list of September 19th. EDMUND W. TABELL Oct-cber 3, 1952 WALSTON, HOFFMAN & GOODWIN