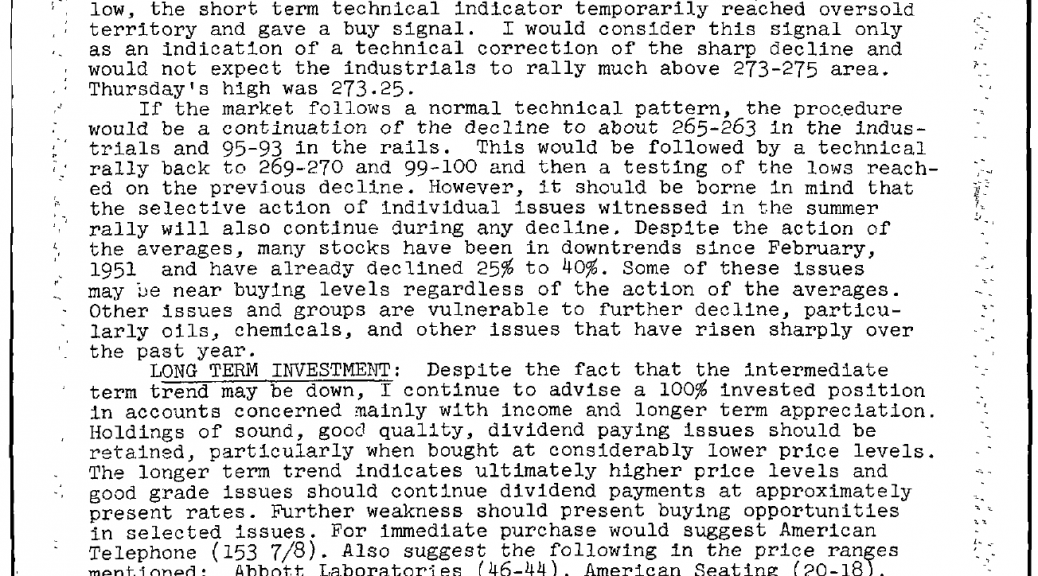 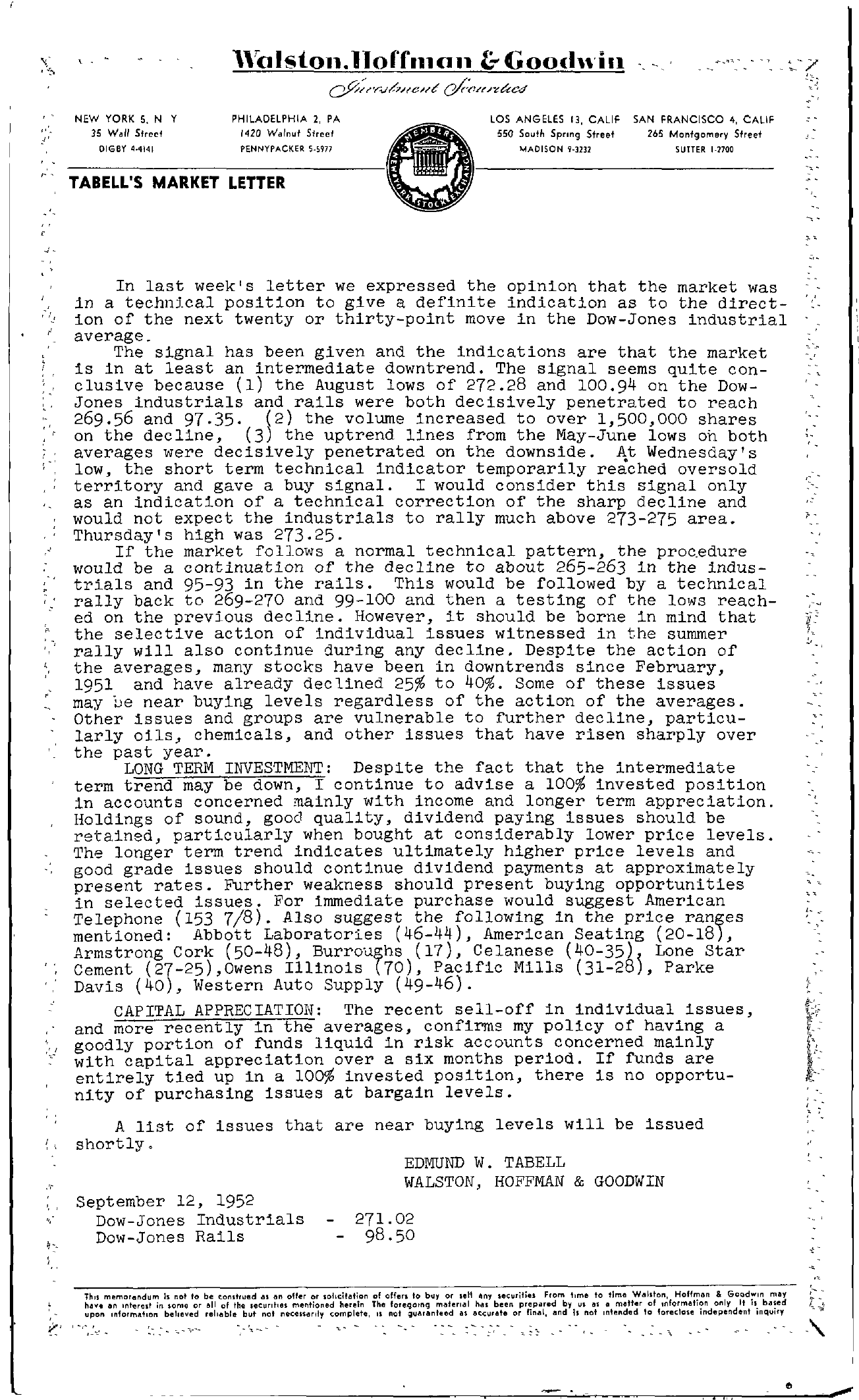 'Olstoll.11offmon &- Goodwin NEW YORK 5. N Y 35 Wall Streef DIGBY '14141 PHILADELPHIA 2. PA 1420 Walnut Streef PENNYPACKER 5-5977 ' TAB ELL'S MARKET LETTER LOS ANGELES 13. CALIF 550 South Spring Street MADISON 93232 SAN FRANCISCO 4. CALIF 265 Montgomery Street SUTTER 12100 In last week's letter we expressed the opinion that the market was in a technlcal position to give a definite indication as to the direct- , ', ion of the next twenty or thirty-point move in the Dow-Jones industrial i average. The signal has been given and the indications are that the market is in at least an intermediate downtrend. The signal seems quite con- ' clusive because (1) the August lows of 272.28 and 100.94 on the DowJones industrials and rails were both decisively penetrated to reach 269.56 and 97.35. (2) the volume increased to over 1,500,000 shares on the decline, (3) the uptrend lines from the May-June lows on both averages were decisively penetrated on the downside. t Wednesday's low, the short term technical indicator temporarily reached oversold territory and gave a buy signal. I would consider this signal only as an indication of a technical correction of the sharp decline and would not expect the industrials to rally much above 273-275 area. Thursday's high was 273.25. If the market follows a normal technical pattern, the proc,edure would be a continuation of the decline to about 265-263 in the indus- ,. trials and 95-93 in the rails. This would be followed by a technical rally back to 269-270 and 99-100 and then a testing of the lows reach- ed on the previous decline. However, it should be borne in mind that the selective action of individual issues witnessed in the summer rally will also continue during any decline. Despite the action of the averages, many stocks have been in downtrends since February, 1951 and have already declined 25 to 40. Some of these issues may e near buying levels regardless of the action of the averages. Other issues and groups are vulnerable to further decline, particu- larly oils, chemicals, and other issues that have risen sharply over the past year. LONG TERM INVESTME Despite the fact that the intermediate term trend may be down, I continue to advise a 100 invested position in accounts concerned mainly with income and longer term appreciation. Holdings of sound, gooe quality, dividend paying issues should be retained, particularly when bought at considerably lower price levels. The longer term trend indicates ultimately higher price levels and good grade issues should continue dividend payments at approximately present rates. Further weakness should present buying opportunities in selected issues. For immediate purchase would suggest American Telephone (153 7/8). Also suggest the following in the price ranes mentioned Abbott Laboratories (46-44), American Seating (20-18), Armstrong Cork (50-48), Burrouhs (17), Celanese (40-35l Lone Star Cement (27-25),Owens Illinois (70), Pacific Mills (31-28), Parke Davis (40), Western Auto Supply (49-46). CAPITAL APPRECIATION The recent sell-off in individual issues, and more recently in the averages, confirms my policy of having a goodly portion of funds liquid in risk accounts concerned mainly ,;' with capital appreciation over a six months period. If funds are entirely tied up in a 100 invested position, there is no opportunity of purchasing issues at bargain levels. A list of issues that are near buying levels will be issued ' shortly. EDMUND W. TABELL WALSTON, HOFFMAN & GOODWIN , September 12, 1952 Dow-Jones Industrials Dow-Jones Rails 271.02 98.50 7- – .,, , , ' , ThIS memorHldum is not to be conlitrued 0111 an offer or ohcitlltion of offers to buy or sell any securities From time to time W .. lston, Hoffman & GoodWin may hay. an Interest in lome or 1111 of the leCurities mentioned herein The foregOing materllli has been prepared by UJ a! ill matter of mformation only It if b'lied upon ,nformatlon believed rellflb/e but not nece!sflniy complete, n not jUlIrilinteed aJ ac.curate or final, and is not Intended to foreclose independent inquiry 1(' ,' ,.