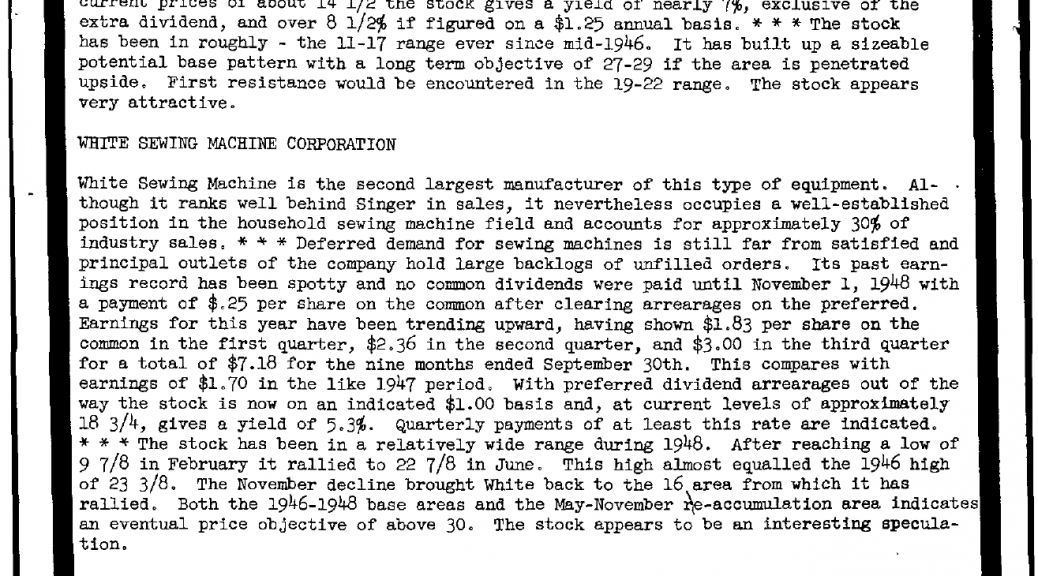 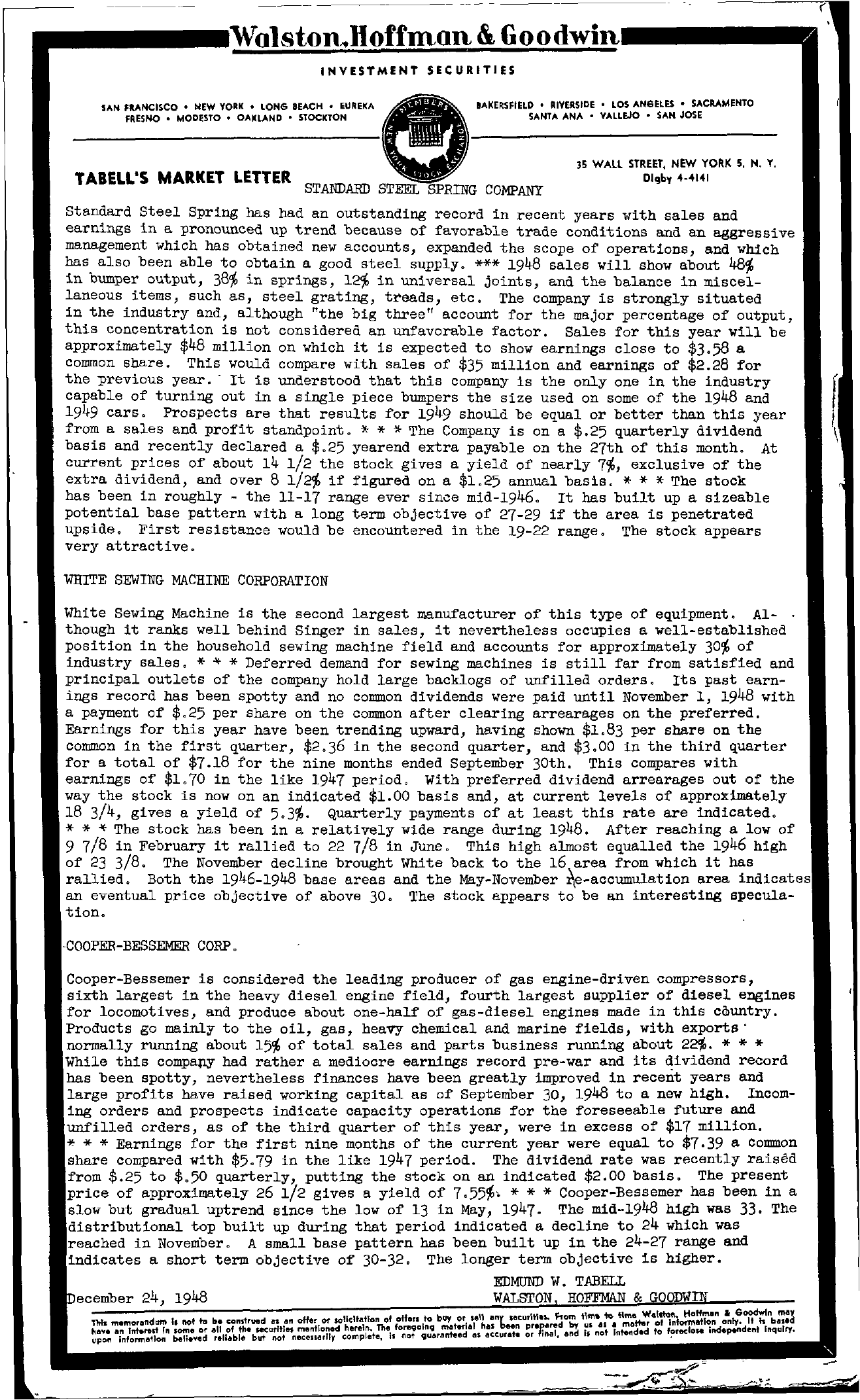 —- – – – – – – – INVESTMENT SECURITIES SAN FRANCISCO NEW YORK. LONG BEACH EUREKA FRESNO. MODESTO OAKLAND STOCKTON BAKERSFIELD RIVERSIDE LOS AN&ElES SACRAMENTO SANTA ANA VALLEJO SAN JOSE TABELL'S MARKET LETTER STANDARD bTl!;J!;L ;Rnlr. COMPANY 35 WALL STREET, NEW YORK 5, N, y, Dlqby 44141 Standard Steel Spring has had an outstanding record in recent years with sales and earnings in a pronounced up trend because of favorable trade conditions and an aggressive management which has obtained new accounts, expanded the scope of operations, and which has also been able to obtain a good steel supply. 1948 sales will show about 48 in bumper output, 38i in springs, 12i in universal jOints, and the balance in miscel- laneous items, such as, steel grating, teads, etc. The company is strongly situated in the industry and, although the big three account for the major percentage of output, this concentration is not considered an unfavorable factor. Sales for this year will be approximately 48 million on which it is expected to show earnings close to 3.58 a common share. This would compare with sales of 35 million and earnings of 2.28 for the previous year. ' It is understood that this company is the only one in the industry capable of turning out in a single piece bumpers the size used on some of the 1948 and 1949 cars. Prospects are that results for 1949 should be equal or better than this year from a sales and profit standpoint. The Company is on a .25 quarterly dividend basis and recently declared a .25 yearend extra payable on the 27th of this month. At current prices of about 14 1/2 the stock gives a yield of nearly 7, exclusive of the extra dividend, and over 8 1/2 if figured on a 1.25 annual basis. The stock has been in roughly – the 11-17 range ever since mid-1946. It has built up a sizeable potential base pattern with a long term objective of 27-29 if the area is penetrated upside. First resistance would be encountered in the 19-22 range. The stock appears very attractive. White Sewing Machine is the second largest manufacturer of this type of equipment. Al- , though it ranks well behind Singer in sales, it nevertheless occupies a well-established position in the household sewing machine field and accounts for approximately 30 of industry sales. Deferred demand for sewing machines is still far from satisfied and principal outlets of the company hold large backlogs of unfilled orders. Its past earn- ings record has been spotty and no common dividends were paid until November 1, 1948 with a payment of .25 per share on the common after clearing arrearages on the preferred. Earnings for this year have been trending upward, having shown 1.83 per share on the common in the first quarter, 2.36 in the second quarter, and 3.00 in the third quarter for a total of 7.18 for the nine months ended September 30th. This compares with earnings of 1.70 in the like 1947 period. With preferred dividend arrearages out of the way the stock is now on an indicated 1.00 basis and, at current levels of approximately 18 3/4, gives a yield of 5.3. Quarterly payments of at least this rate are indicated. The stock has been in a relatively wide range during 1948. After reaching a low of 9 7/8 in February it rallied to 22 7/8 in June. This high almost equalled the 1946 high of 23 3/8. The November decline brought White back to the 16 area from which it has rallied. Both the 1946-1948 base areas and the May-November e-accumulation area lndlla1es an eventual price objective of above 30. The stock appears to be an interesting speculation. I.COinPER-BESSEMER CORP. Cooper-Bessemer is considered the leading producer of gas engine-driven compressors, sixth largest in the heavy diesel engine field, fourth largest supplier of diesel engines for locomotives, and produce about one-half of gas-diesel engines made in this c&untry. Products go mainly to the oil, gas, heavy chemical and marine fields, with exports' normally running about 15 of total sales and parts business running about 22. this company had rather a mediocre earnings record pre-war and its dividend record has been spotty, nevertheless finances have been greatly improved in recent years and large profits have raised working capital as of September 30, 1948 to a new high. Incoming orders and prospects indicate capacity operations for the foreseeable future and lIed orders, as of the third quarter of this year, were in excess of 17 million. Earnings for the first nine months of the current year were equal to 7.39 a common share compared with 5.79 in the like 1947 period. The dividend rate was recently raised from .25 to .50 quarterly, putting the stock on an indicated 2.00 basis. The present of approximately 26 1/2 gives a yield of 7.55. Cooper-Bessemer has been in a but gradual uptrend since the low of 13 in May, 1947. The mid–1948 high was 33. The stributional top built up during that period indicated a decline to 24 which was in November. A small base pattern has been built up in the 24-27 range and short term objective of 30-32. The longer term objective is higher. 24, 1948 EDMUND W. TABELL WALSTON , HOFFMAN & GOODWIN 'redThll memor.ndtmt I, Of shay. lin tnt.rest In soma to or b. all con.trved a, an of the Mel/rltl offer Of scllcltatlon of mentioned herein,'., offen to fore g olnQ b,uy!oralsellh0eturUfCUfit!t.al and tulfsM.sto UmmaetteWr eloltfofl!n..,foHfmoaHttomnanon' lyG. oo11dwIIinbamsa.dy If not Intendad to foreclose Indllp-dent Inquiry, upon informolltlCHI beli…..d renable bllt not necessarily comp II III, S no quara III .