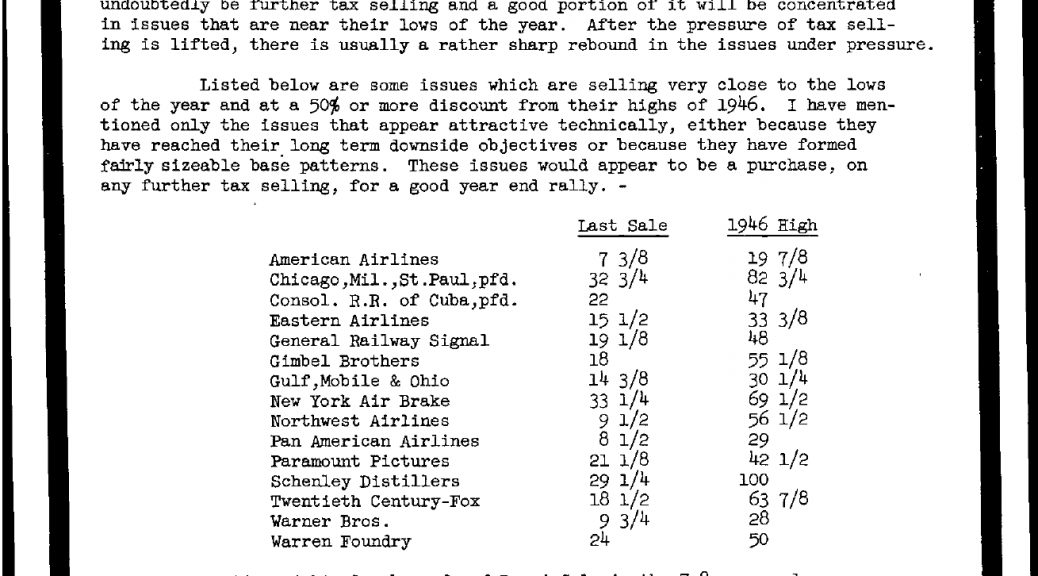 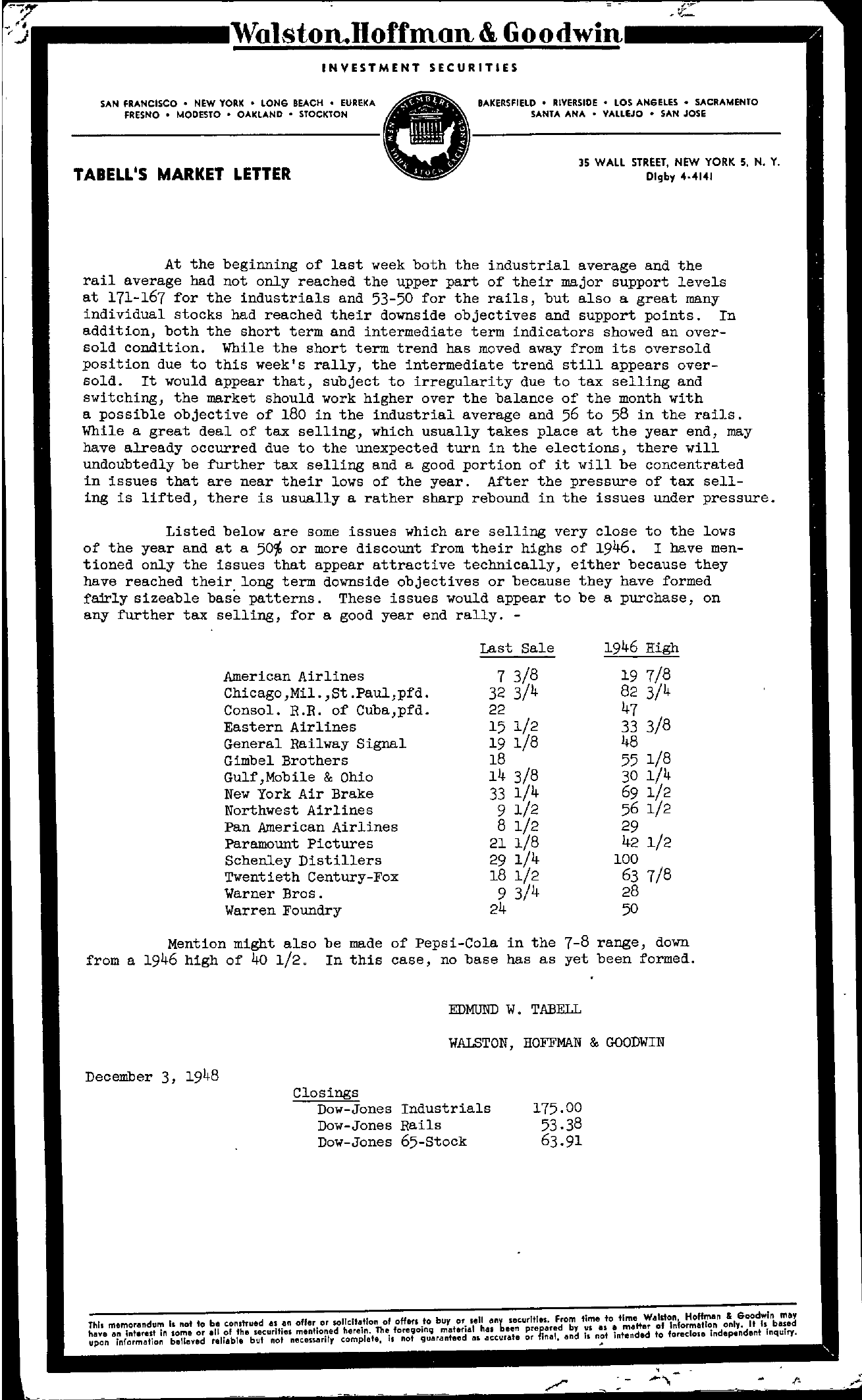 lston.Hoffmon &, Goodwin INVESTMENT SECURITIES SAN fRANCISCO NEW lORK LONG BEACH EUREKA FRESNO MODESTO OAKLAND STOCKTON BAKERSFIELD RIVERSIDE LOS ANSElES SACRAMENTO SANTA ANA VAllEJO SAN JOSE TABELL'S MARKET LETTER lS WALL STREET. NEW YORK S. N. Y. Digby 44141 At the beginning of last week both the industrial average and the rail average had not only reached the upper part of their major support levels at 171-167 for the industrials and 53-50 for the rails, but also a great many individual stocks had reached their downside objectives and support points. In addition, both the short term and intermediate term indicators showed an oversold condition. While the short term trend has moved away from its oversold position due to this week's rally, the intermediate trend still appears oversold. It would appear that, subject to irregularity due to tax selling and switching, the market should work higher over the balance of the month with a possible objective of 180 in the industrial average and 56 to 58 in the rails. While a great deal of tax selling, which usually takes place at the year end, may have already occurred due to the unexpected turn in the electiOns, there will undoubtedly be further tax selling and a good portion of it will be concentrated in issues that are near their lows of the year. After the pressure of tax selling is lifted, there is usually a rather sharp rebound in the issues under pressure. Listed below are some issues which are selling very close to the lows of the year and at a 50 or more discount from their highs of 1946. I have mentioned only the issues that appear attractive technically, either because they have reached their long term downside objectives or because they have formed fairly sizeable base patterns. These issues would appear to be a purchase, on any further tax selling, for a good year end rally. – American Airlines Chicago,Mil.,St.Paul,pfd. Consolo R.R. of Cuba,pfd. Eastern Airlines General Railway Signal Gimbel Brothers Gulf,Mobile & Ohio New York Air Brake Northwest Airlines Pan American Airlines Paramount Pictures Schenley Distillers Twentieth Century-Fox Warner Bros. Warren Foundry Last Sale 7 3/8 32 3/4 22 15 1/2 19 1/8 18 14 3/8 33 1/4 9 1/2 8 1/2 21 1/8 29 1/4 18 1/2 9 3/4 24 1946 High 19 7/8 82 3/4 47 33 3/8 48 55 1/8 30 1/4 69 1/2 56 1/2 29 42 1/2 100 63 7/8 28 50 Mention might also be made of Pepsi-Cola in the 7-8 range, down from a 1946 high of 40 1/2. In this case, no base has as yet been formed. December 3, 1948 EDMUND W. TABELL WALSTON, HOFFMAN & GOODWIN Closings Dow-Jones Industrials Dow-Jones Rails Dow-Jones 65-Stock 175.00 53.38 63.91 ThI, memorandum i.'prel1'''jdhave en Int.red In upon informlltion I, not to lome or believed .b1r1eeliocafobnltehmeubesuedtcuanrsiottiaensneomtfefeesnrtlrool!rt,eyd5OchloIecmrlteapi.nttle.otneT,hoefIsfoonfrfeoegtnO.9itnuogIHbamunya.t.0e'd.,aIlaelIhI aajcsUtu'treaseneco,rItI as. From na. a fImeastoa timmaetteWr aolsftolnnoHrmoaftfmloann o&nlyG. oIotdwIsinbamseady not Intended to forecloe independent Inquiry. … – -,