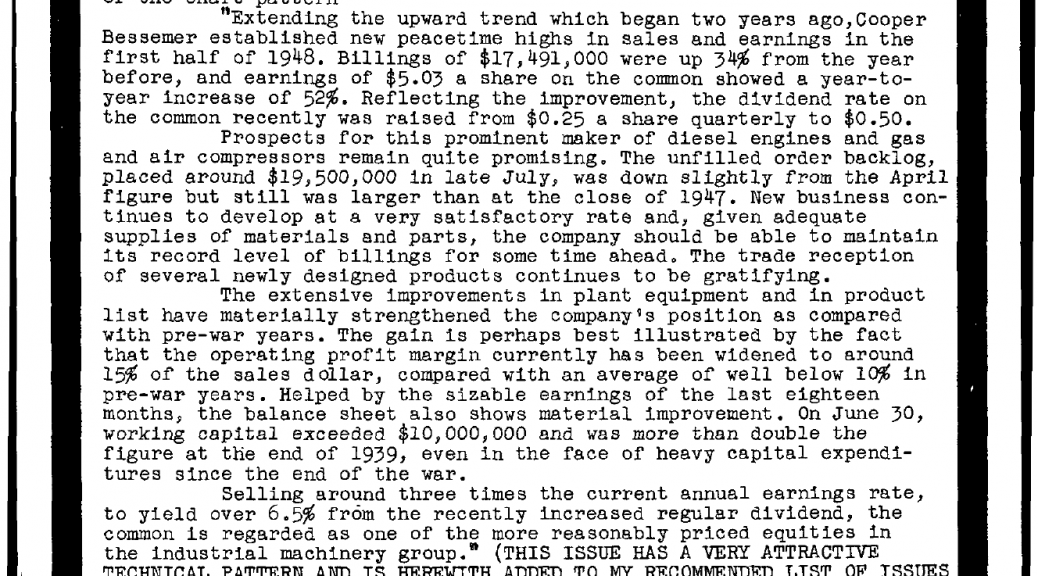 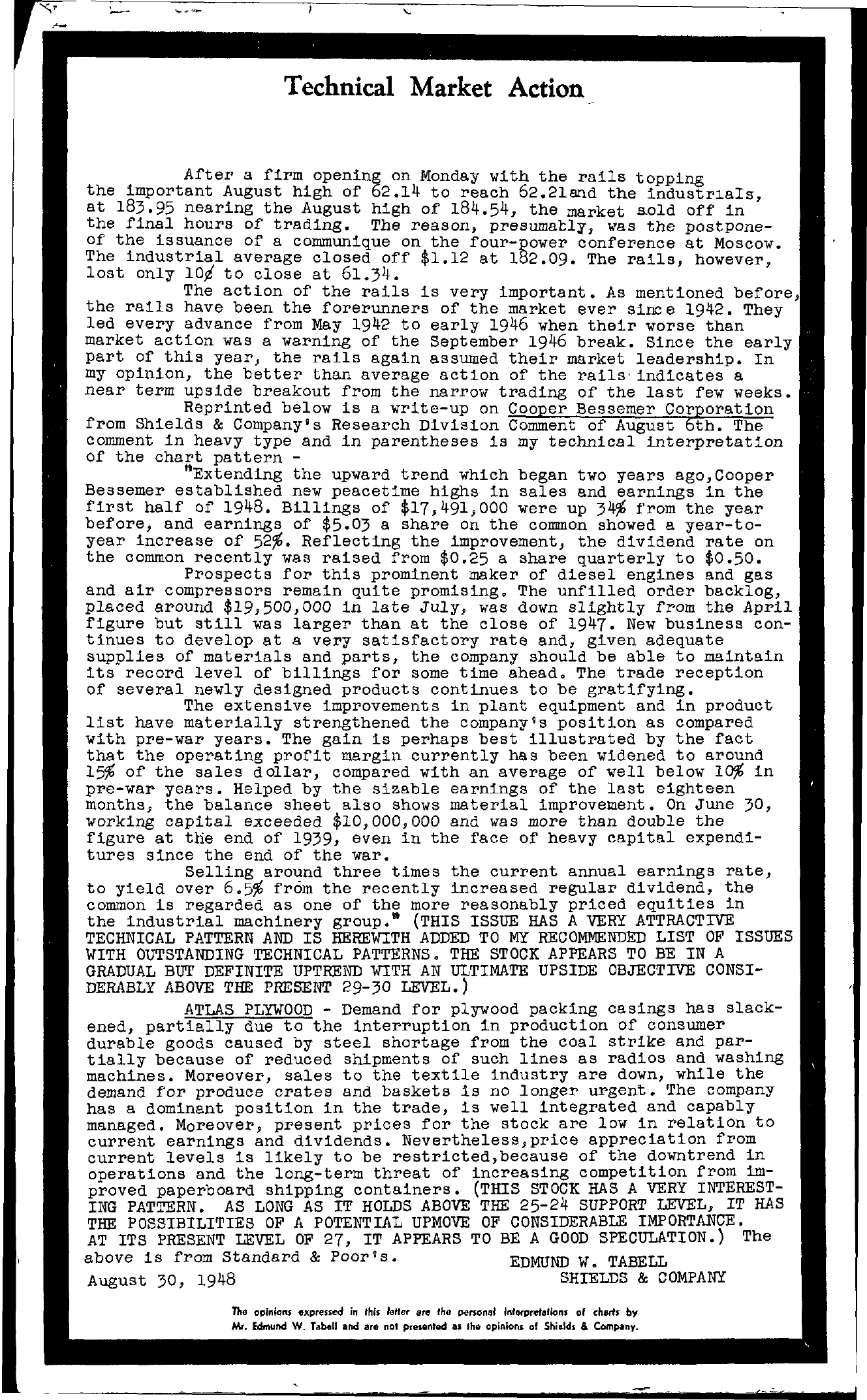 Technical Market Action After a firm opening on Monday with the rails topping the important August high of 62.14 to reach 62.2land the industrlaIs, at 183.95 nearing the August high of 184.54, the market aold off in the final hours of trading. The reason, presumatly, was the postpone- of the issuance of a communique on the four-power conference at Moscow. The industrial average closed off 1.12 at 182.09. The rails, however, lost only lOt to close at 61.34. The action of the rails is very important. As mentioned before the rails have been the forerunners of the market ever since 1942. They led every advance from May 1942 to early 1946 when their worse than market action was a warning of the September 1946 break. Since the early part of this year, the rails again assumed their market leadership. In my opinion, the better than average action of the rails' indicates a near term upside breakout from the narrow trading of the last few weeks. Reprinted below is a write-up on Cooper Bessemer Corporation from Shields & Company's Research DiviSion Comment of August 6th. The comment in heavy type and in parentheses is my technical interpretation of the chart pattern – Extending the upward trend which began two years ago,Cooper Bessemer established new peacetime highs in sales and earnings in the first half of 1948. Billings of 17,491,000 were up 34 from the year before, and earnings of 5.03 a share on the common showed a year-toyear increase of 52. Reflecting the improvement, the dividend rate on the common recently was raised from 0.25 a share quarterly to 0.50. Prospects for this prominent maker of diesel engines and gas and air compressors remain quite promising. The unfilled order backlog, placed around 19,500,000 in late July, was down slightly from the April figure but still was larger than at the close of 1947. New business continues to develop at a very satisfactory rate and, given adequate supplies of materials and parts, the company should be able to maintain its record level of billings for some time ahead. The trade reception of several newly designed products continues to be gratifying. The extensive improvements in plant eqUipment and in product list have materially strengthened the company's position as compared with pre-war years. The gain is perhaps best illustrated by the fact that the operating profit margin currently has been widened to around 15 of the sales dollar, compared with an average of well below 10 in pre-war years. Helped by the sizable earnings of the last eighteen months, the balance sheet also shows material improvement. On June 30, working capital exceeded 10,000,000 and was more than double the figure at the end of 1939, even in the face of heavy capital expendi- tures since the end of the war. Selling around three times the current annual earnings rate, to yield over 6.5 from the recently increased regular dividend, the common is regarded as one of the more reasonably priced equities in the industrial machinery group. (THIS ISSUE HAS A VERY ATTRACTIVE TECHNICAL PATTERN AND IS HEREWITH ADDED TO MY RECOMMENDED LIST OF ISSUES WITH OUTSTANDING TECHNICAL PATTERNS. THE STOCK APPEARS TO BE IN A GRADUAL BUT DEFINITE UPTREND WITH AN ULTIMATE UPSIDE OBJECTIVE CONSIDERABLY ABOVE THE PRESENT 29-30 LEVEL.) ATLAS PLYWOOD – Demand for plywood packing casings has slack- ened, partially due to the interruption in production of consumer durable goods caused by steel shortage from the coal strike and par- tially because of reduced shipments of such lines as radios and washing machines. Moreover, sales to the textile industry are down, while the demand for produce crates and baskets is no longer urgent. The company has a dominant position in the trade, is well integrated and capably managed. Moreover, present prices for the stock are low in relation to current earnings and dividends. Nevertheless,price appreciation from current levels is likely to be restricted, because of the downtrend in operations and the long-term threat of increasing competition from im- proved paperboard shipping containers. (THIS STOCK HAS A VERY INTEREST- ING PATTERN. AS LONG AS IT HOLDS ABOVE THE 25-24 SUPPORT LEVEL, IT HAS THE POSSIBILITIES OF A POTENTIAL UPMOVE OF CONSIDERABLE IMPORTANCE. AT ITS PRESENT LEVEL OF 27, IT APPEARS TO BE A GOOD SPECULATION.) The above is from Standard & Poor's. August 30, 1948 EDMUND W. TABELL SHIELDS & COMPANY The opinions expressed in this IeUer are tne persona' In'orpretallons 01 chBrts by Mr. fdmund W. rabel! and are not presented as Ihe opinions of Shields & Company.