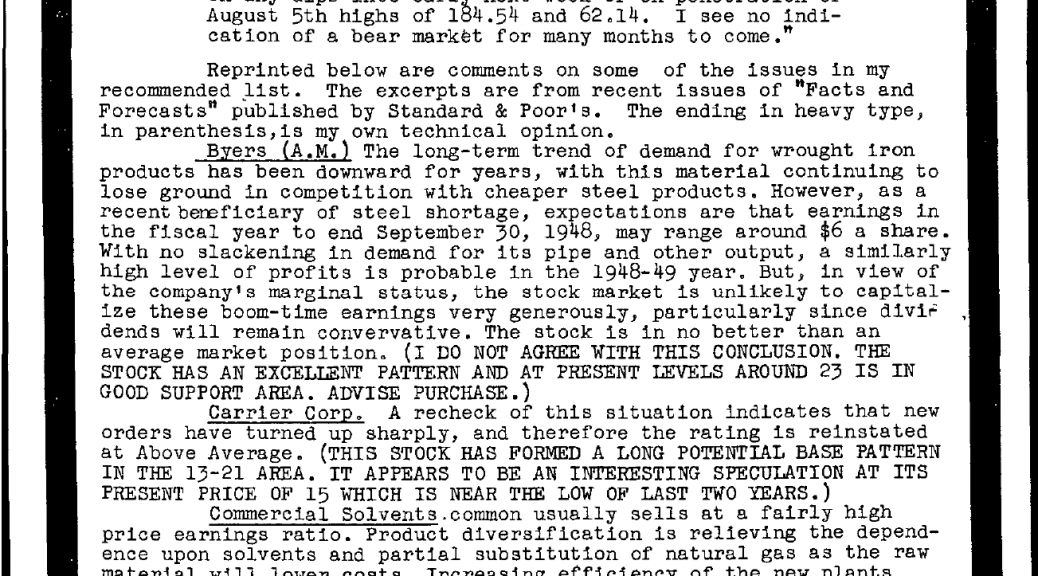 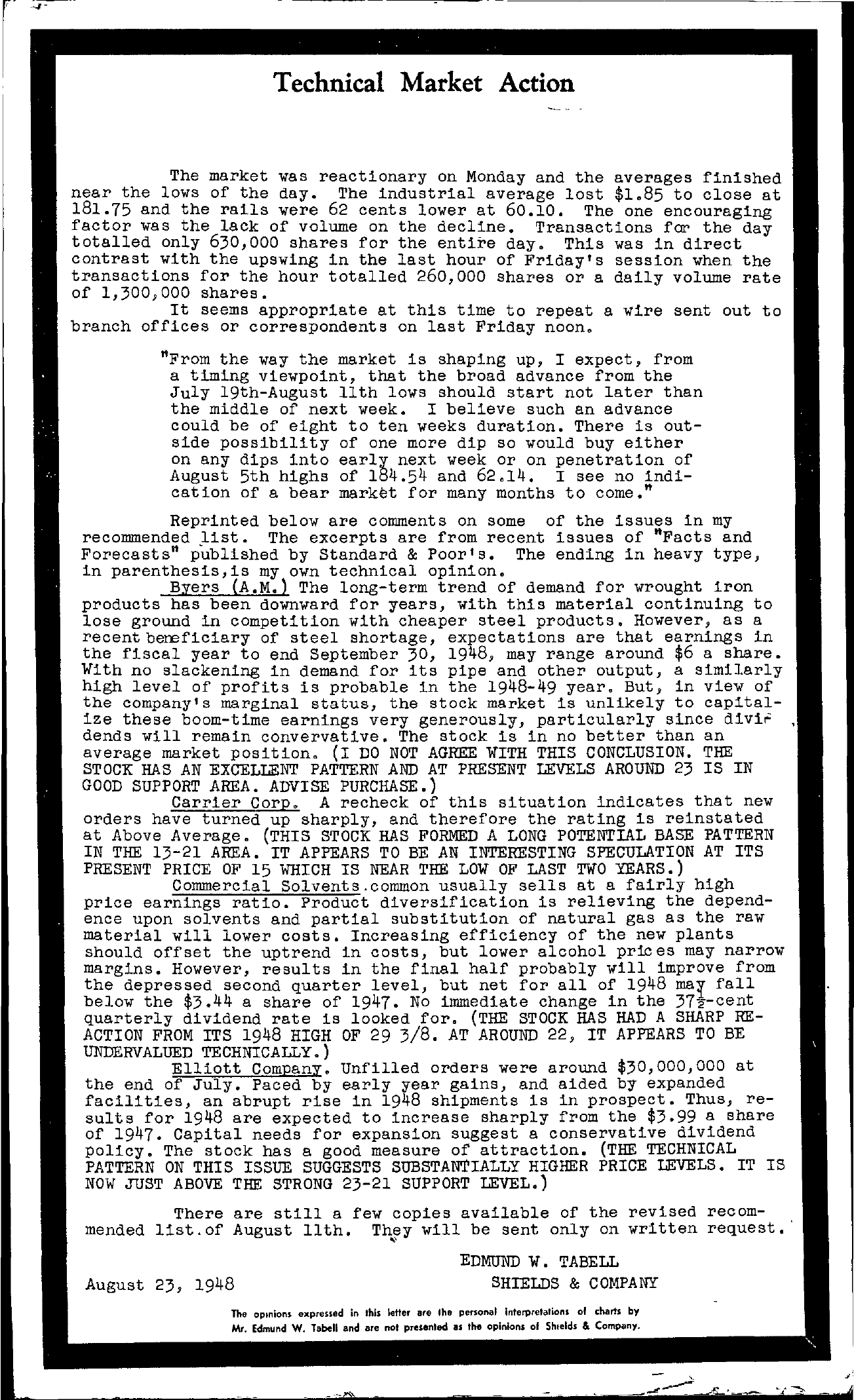 Technical Market Action The market was reactionary on Monday and the averages finished near the lows of the day. The industrial average lost 1.85 to close at 181.75 and the rails were 62 cents lower at 60.10. The one encouraging factor was the lack of volume on the decline. Transactions f the day totalled only 630,000 shares for the entire day. This was in direct contrast with the upswing in the last hour of Friday's session when the transactions for the hour totalled 260,000 shares or a daily volume rate of 1,300,000 shares. It seems appropriate at this time to repeat a wire sent out to branch offices or correspondents on last Friday noon. From the way the market is shaping up, I expect, from a timing viewpoint, that the broad advance from the July 19th-August 11th lows should start not later than the middle of next week. I believe such an advance could be of eight to ten weeks duration. There is outside possibility of one more dip so would buy either on any dips into earlJ next week or on penetration of August 5th highs of 184.54 and 62.14. I see no indication of a bear market for many months to come. Reprinted below are comments on some of the issues in my recommended list. The excerpts are from recent issues of Facts and Forecasts published by Standard & Poor's. The ending in heavy type, in parenthesis,is my own technical opinion. Byers (A.M.' The long-term trend of demand for wrought iron products has been downward for years, with this material continuing to lose ground in competition with cheaper steel products. However, as a recent beneficiary of steel shortage, expectations are that earnings in the fiscal year to end September 30, 1948, may range around 6 a share. With no slackening in demand for its pipe and other output, a similarly high level of profits is probable in the 1948-49 year. But, in view of the company's marginal status, the stock market is unlikely to capitalize these boom-time earnings very generously, particularly since divi dends will remain convervative. The stock is in no better than an average market position. (I DO NOT AGREE WITH THIS CONCLUSION. THE STOCK HAS AN EXCELLENT PATTERN AND AT PRESENT LEVELS AROUND 23 IS IN GOOD SUPPORT AREA. ADVISE PURCHASE.) Carrier Corp. A recheck of this situation indicates that new orders have turned up sharply, and therefore the rating is reinstated at Above Average. (THIS STOCK HAS FORMED A LONG POTENTIAL BASE PATTERN IN THE 13-21 AREA. IT APPEARS TO BE AN INTERESTING SPECULATION AT ITS PRESENT PRICE OF 15 WHICH IS NEAR THE LOW OF LAST TWO YEARS.) Commercial Solvents.common usually sells at a fairly high price earnings ratio. Product diversification is relieving the dependence upon solvents and partial substitution of natural gas as the raw material will lower costs. Increasing efficiency of the new plants should offset the uptrend in costs, but lower alcohol prwes may narrow margins. However, results in the final half probably will improve from the depressed second quarter level, but net for all of 1948 maI fall below the 3.44 a share of 1947. No immediate change in the 372-cent quarterly dividend rate is looked for. (THE STOCK HAS HAD A SHARP RE- ACTION FROM ITS 1948 HIGH OF 29 3/8. AT AROUND 22, IT APPEARS TO BE UNDERVALUED TECHNICALLY.) Elliott Company, Unfilled orders were around 30,000,000 at the end of July. Paced by early year gains, and aided by expanded facilities, an abrupt rise in 1948 shipments is in prospect. Thus, re- sults for 1948 are expected to increase sharply from the 3.99 a share of 1947. Capital needs for expansion suggest a conservative dividend policy. The stock has a good measure of attraction. (THE TECHNICAL PATTERN ON THIS ISSUE SUGGESTS SUBSTANTIALLY HIGHER PRICE LEVELS. IT IS NOW JUST ABOVE THE STRONG 23-21 SUPPORT LEVEL.) There are still a few copies available of the revised recommended list.of August 11th. They will be sent only on written request.' EDMUND W. TABELL August 23, 1948 SHIELDS & COMPANY The opinions expressed in Ihb letter are the personal Interpretations 01 charts by Mr. Edmund W. labell and are not presented as the opinions 01 Shields & Company. —