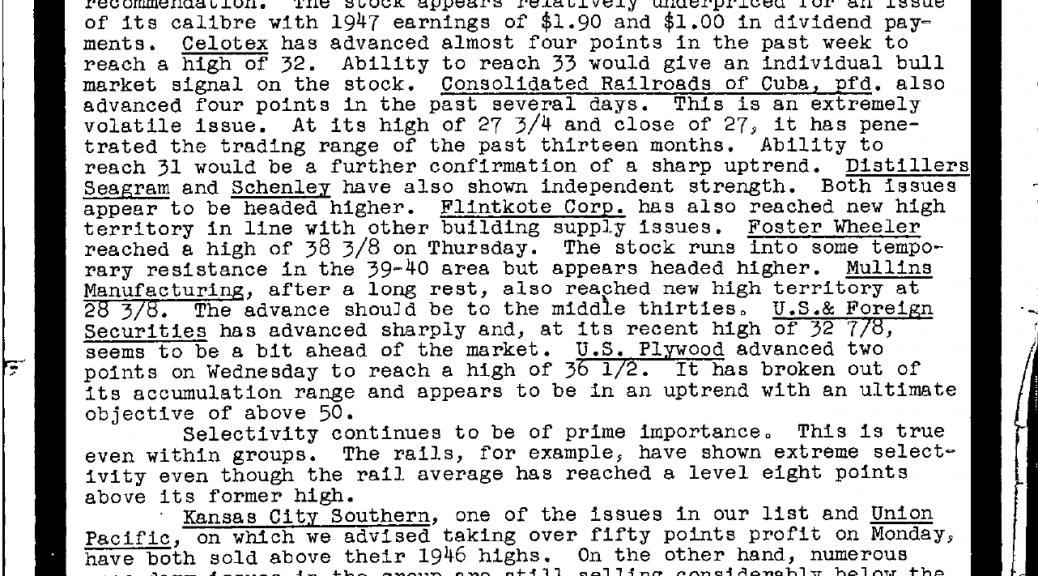 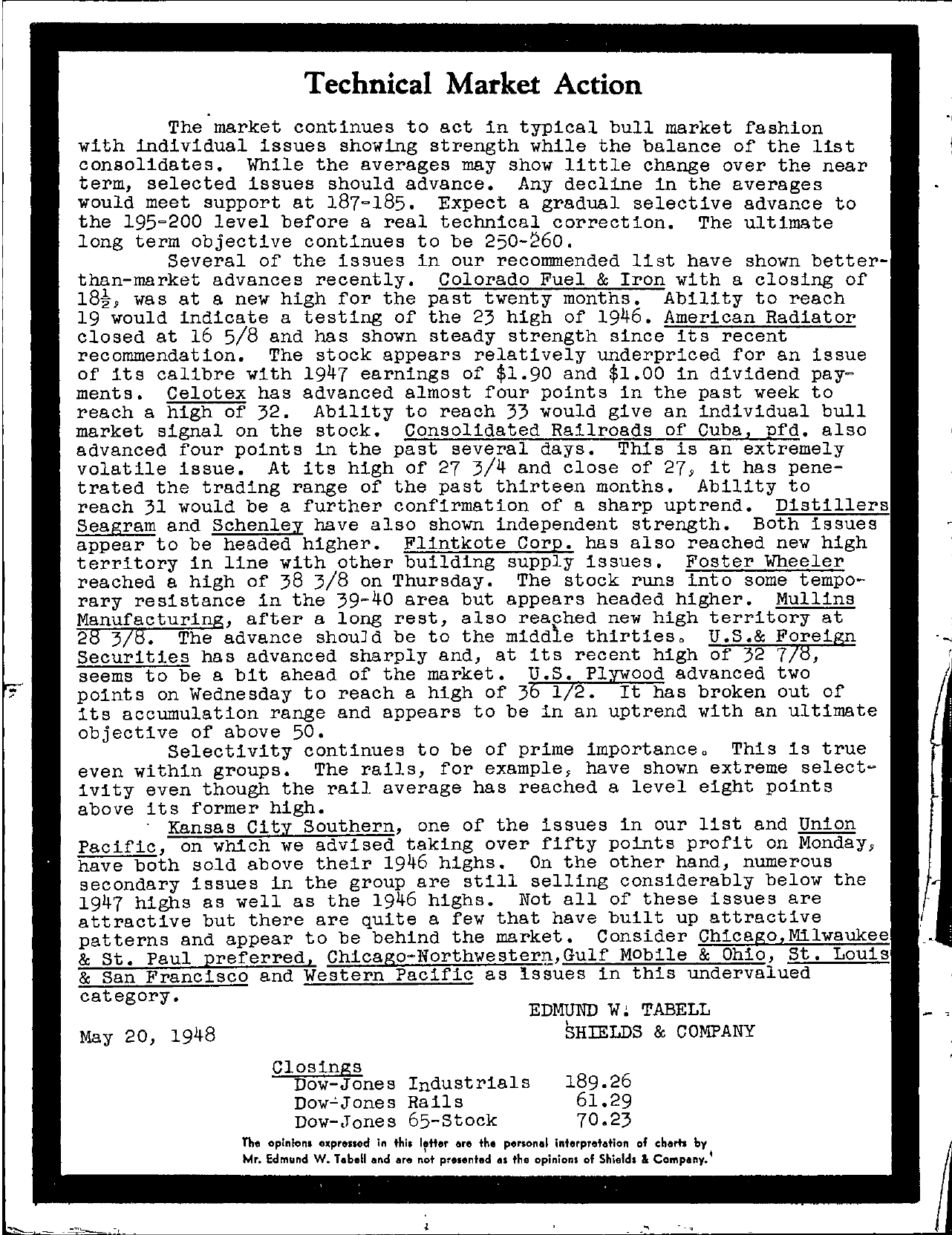 Technical Market Action The market continues to act in typical bull market fashion with individual issues showing strength while the balance of the list consolidates. While the averages may show little change over the near term, selected issues should advance. Any decline in the averages would meet support at 187185. Expect a gradual selective advance to the 195200 level before a real technical correction. The ultimate long term objective continues to be 250-260. Several of the issues in our recommended list have shown bet than-market advances recently. Colorado Fuel & Iron with a closing of 18t, was at a new high for the past twenty months. Ability to reach 19 would indicate a testing of the 23 high of 1946. American Radiator closed at 16 5/8 and has shown steady strength since its recent recommendation. The stock appears relatively underpriced for an issue of its calibre with 1947 earnings of 1.90 and 1.00 in dividend pay- ments. Celotex has advanced almost four points in the past week to reach a high of 32. Ability to reach 33 would give an individual bull market signal on the stock. Consolidated Railroads of Cuba, pfd. also advanced four points in the past several days. This is an extremely volatile issue. At its high of 27 3/4 and close of 27, it has pene- trated the trading range of the past thirteen months. Ability to reach 31 would be a further confirmation of a sharp uptrend. Seagram and Schenley have also shown independent strength. B appear to be headed higher. Flintkote Corp. has also reached new high territory in line with other building supply issues. Foster Wheeler reached a high of 38 3/8 on Thursday. The stock runs into some tempo- rary resistance in the 39-40 area but appears headed higher. Mullins Manufacturing, after a long rest, also reached new high territory at 28 3/8. The advance shouJd be to the middle thirtieso U.S.& Foreign Securities has advanced sharply and, at its recent high of 32 7/8, seems to be a bit ahead of the market. U.S. Plywood advanced two pOints on Wednesday to reach a high of 36 1/2. It has broken out of its accumulation range and appears to be in an uptrend with an ultimate objective of above 50. Selectivity continues to be of prime importanceo This is true even within groups. The rails, for example, have shown extreme select ivity even though the rail average has reached a level eight points above its former high. . Kansas City Southern, one of the issues in our list and Union Pacific, on which we advised taking over fifty points profit on Monday, have both sold above their 1946 highs. On the other hand, numerous secondary issues in the group are still selling considerably below the 1947 highs as well as the 1946 highs. Not all of these issues are attractive but there are quite a few that have built up attractive patterns and appear to be behind the market. Consider & St. Paul preferred, Chicago-Northwester, MObil & San Francisco and Western Pacific as issues category. EDMUND VI TABELL May 20, 1948 SHIELDS & COMPANY Closings Dow-Jones Industrials Dow'Jones Rails Dow-,Tones 65-Stock 189.26 61.29 70.23 The oplnionl a.pressad in this Itter ere the personal interpretation of charts by Mr. Edmund W. labell and are not prelented illS the opinionl of Shields & Complllny.' – —–, , .' ., ,