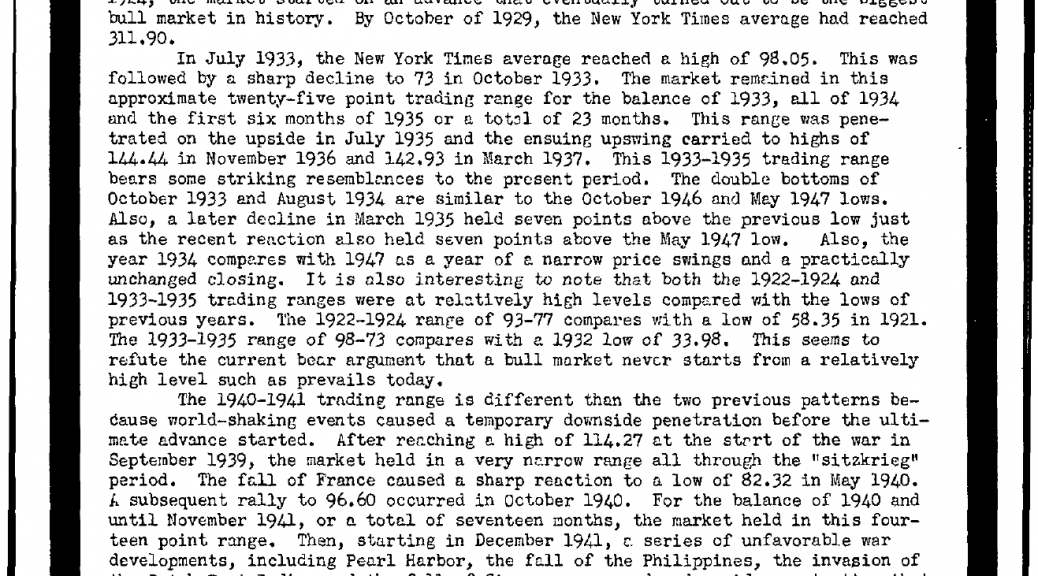 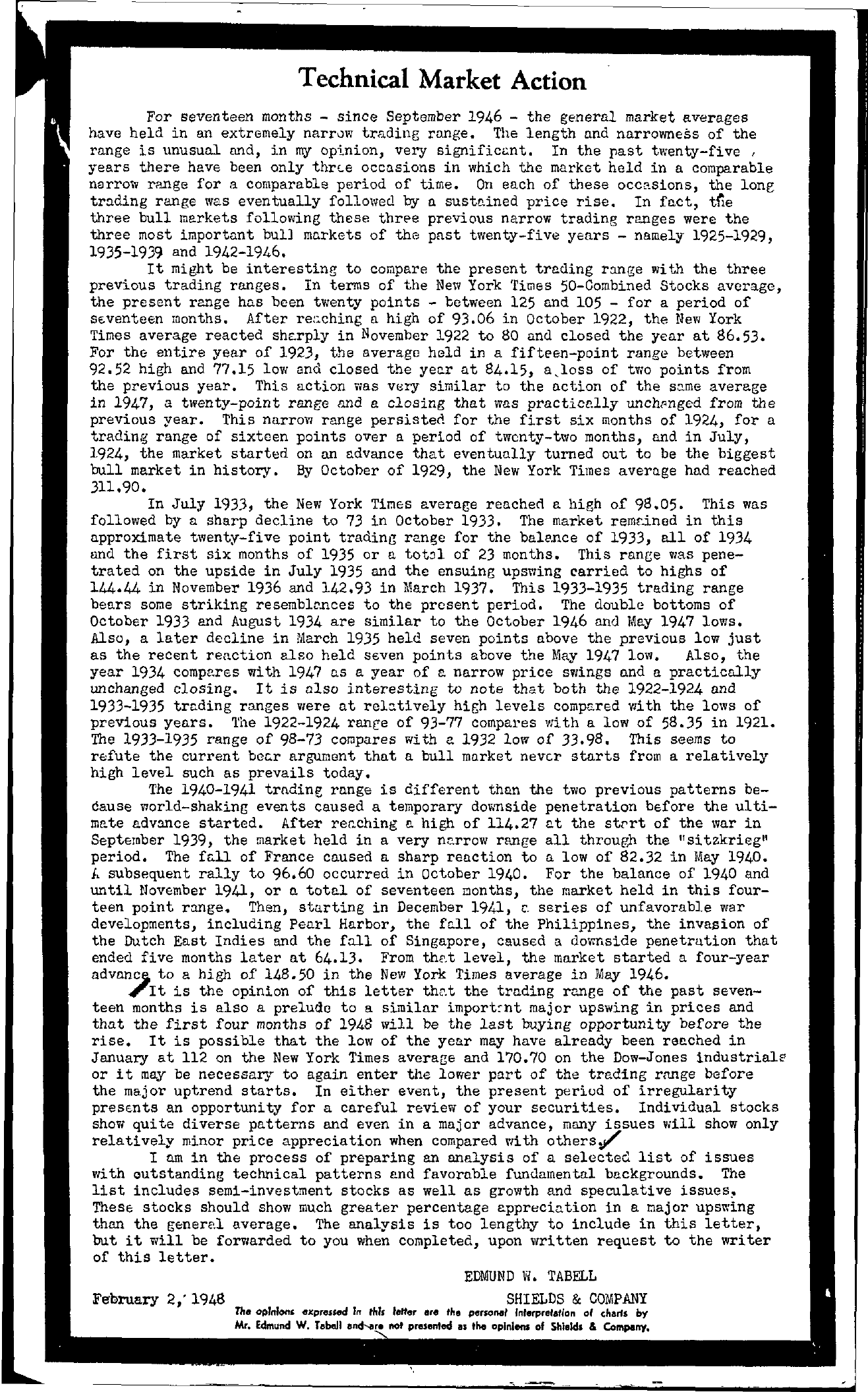 Technical Market Action For seventeen months – since September 1946 – the general market averages have held in an extremely narruw trading rnnge. The length and narrowness of the range is unusual and, in my opinion, very significlnt. In the past twenty-five , years there have been only thrse occasions in which the market held in a comparable narrow range for a comparable period of time. On each of these occasions, the long trading range was eventually followed by a sustained price rise. In fact, tte three bull markets follovung these thrpe previous narrow trading rp.nges were the three most important bull markets of the pnst twenty-five years – namely 1925-1929, 1935-1939 and 1942-1946. It might be interesting to compare the present trading range with the three previous trading ranges. In terms of the New York Times 50-Combined Stocks average, the present range has been twenty points – between 125 and 105 – for a period of secventeen months. After re'ching a high of 93.06 in October 1922, the New York Times average reacted shrply in November 1922 to 80 and closed the year at 86.53. For the entire year of 1923, the averago held in a fifteen-point range between 92.52 high and 77.15 low and closed the year at 84.15, a,loss of two points from the previous year. This action was very similar to the action of the same average in 1947, a twenty-point ranee and a clOSing that was practically unchnged from the previous year. This narrow range perSisted for the first six months of 1924, for a trading range of sixteen points over a period of twenty-two months, and in July, 1924, the market started on an advance that eventually turned out to be the biggest bull market in history. By October of 1929, the New York Times average had reached 311.90. In July 1933, the New York Ties average reached a high of 98.05. This was followed by a sharp decline to 73 in October 1933. The market remtined in this approximate twenty-five point tradinil range for the balence of 1933, el of 1934 and the first six months of 1935 or a totl of 23 months. This range was penetrated on the upside in July 1935 and the ensuing upswing carried to highs of 144.44 in November 1936 and 142.93 in March 1937. This 1933-1935 trading range bears some striking resemblances to the present period. The double bottoms of October 1933 and August 1934 are Similar to the October 1946 and May 1947 lows. Also, a later decline in March 1935 held seven points above the previous low just as the recent reaction also held seven points above the May 1947 low. Also, the year 1934 compares with 1947 as a year of a narrow price swings and a practically unchanged clOSing. It is also interesting to note that both the 1922-1924 and 1933-1935 tmding ranges Vlere at relatively hiGh levels compared with the lows of previous years. The 1922-1924 rane-e of 93-77 compares with a low of 58.35 in 1921. The 19.3.3-19.35 range of 98-73 compares with a 1932 low of .33.98. This seems to refute the current bear argument that a bull market never starts from a relatively high level such as prevails today. The 1940-1941 trading range is different than the two previous patterns because world-Shaking events caused a temporary do.side penetration before the ultimate advance started. After reaching a high of 114.27 at the strt of the war in September 1939, the market held in a very narrow range all through the sitzkrieg period. The fall of France caused a sharp reaction to a low of 82.32 in May 1940. J. subsequent rally to 96.60 occurred in October 1940. For the balance of 1940 and until November 1941, or 0. total of seventeen !lonths, the market held in this fourteen point range. Then, starting in December 1941, c. series of unfavorable war developments, including Pearl Harbor, the fall of the Philippines, the invasion of the Dutch East Indies and the fall of Singapore, caused a downside penetrution that ended five months later at 64.1.3. From thr.t level, the market started a four-year advanc to a high of 148.50 in the New York Times average in May 1946. ' I t is the opinion of this letter th.t the trading runge of the past seventeen months is also a prelude to a similar importnt major upswing in prices and that the first four months of 1948 will be the last buying opportunity before the rise. It is possible that the low of the year may have already been reached in January at 112 on the New York Times average and 170.70 on the Dow-Jones industriale or it may be necessary to again enter the lower part of the trading rnnge before the major uptrend starts. In either event, the present period of irregularity presents an opportunity for a careful review of your securities. Individual stocks show quite diverse patterns and even in a major advance, many issues will show only relatively minor price appreciation when compared with others;/, I o.m in the process of preparing an analysis of a selected list of issues with outstanding technical patterns and favorable fundamental backgrounds. The list includes semi-investment stocks as well as growth and speculative issues, These stocks should show much greater percentage eppreciation in a najor upswing than the genere.l average. The analysis is too lengthy to include in this letter, but it will be forwarded to you when completed, upon written request to the writer of this letter. EDMUND VI. TABELL February 2,'1948 SHIELDS & COMPANY 'he personal Interpretation of charls by not presented as the opinieM of Shields & Company.