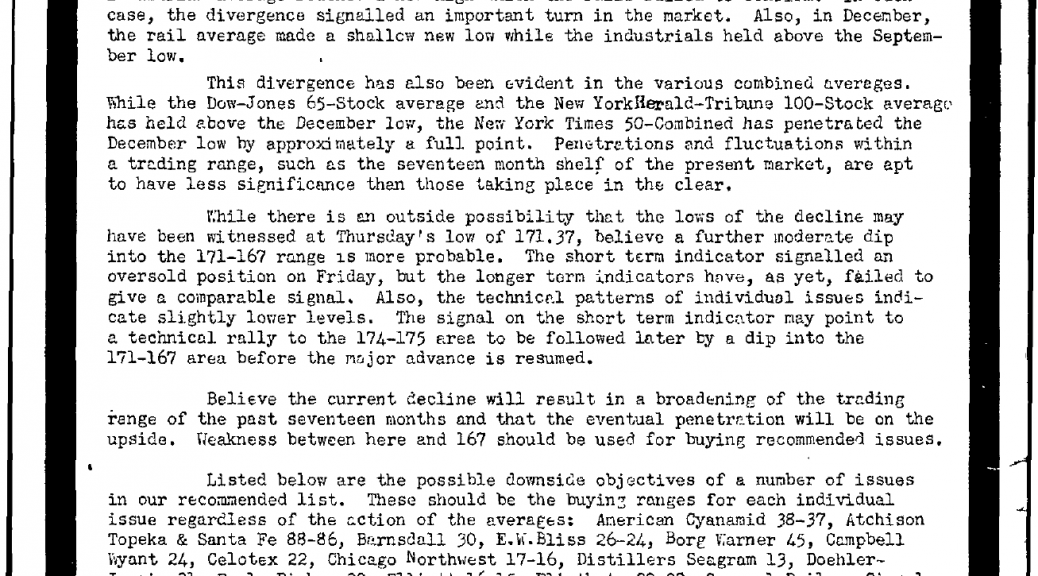 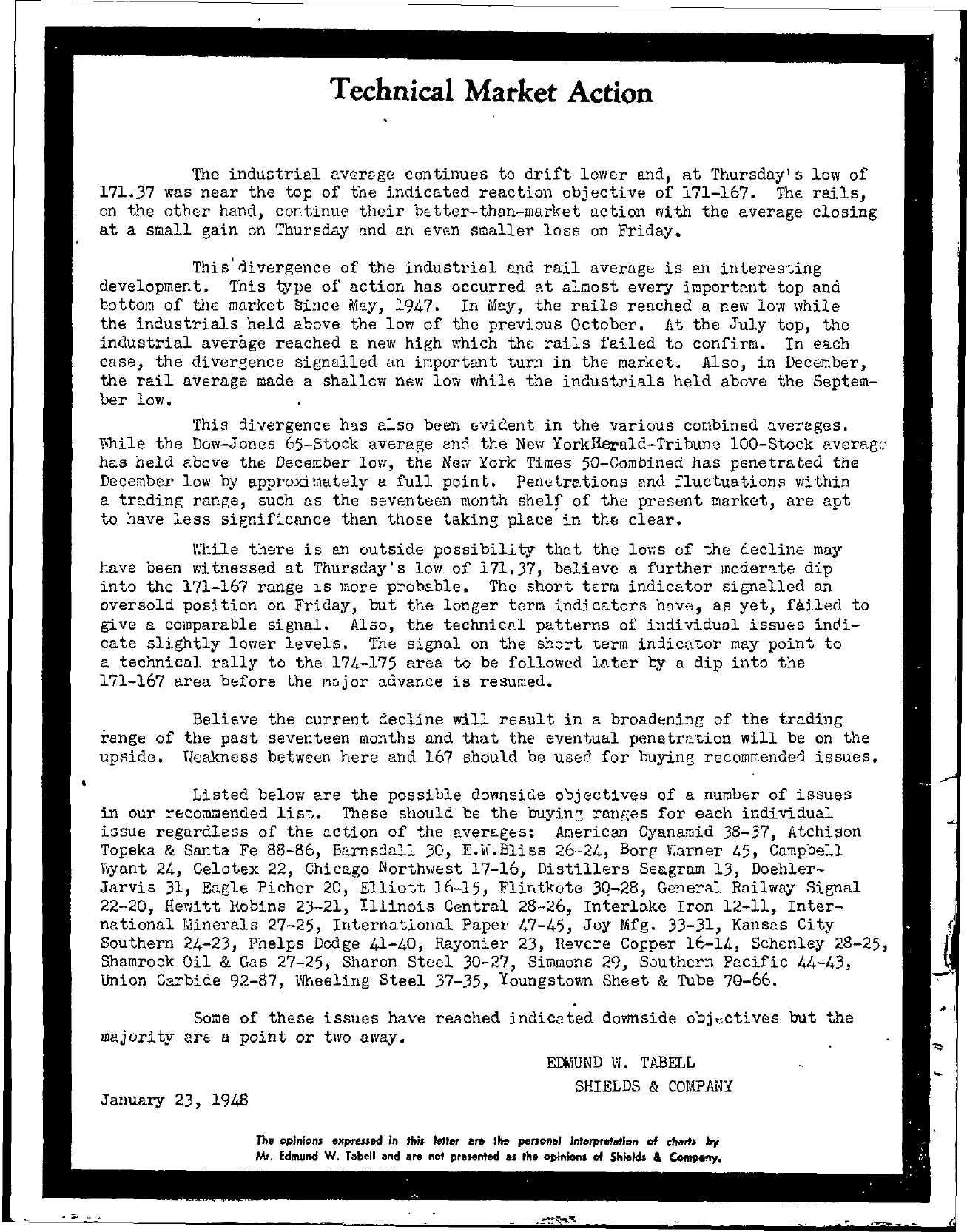 Technical Market Action The industrial av!!rage continues to drift lower and, at Thursday's low of 171.37 was near the top of the indicated reaction objective of 171-167. Tht rails, on the other hand, continuE' their h8tter-than-market action with the average closing at a small gain on Thursday and an even smaller loss on Friday. This'divergence of the industrial and rail average is an interesting development. This type of action has occurred P.t alr.lOst every inport('.nt top and bottom of the market ince May, 1947. In May, the rails reached a new low while the industrials held above the low of the previous October. At the July top, the industrial average reached e. new high which the rails failed to confirm. In each case, the divergence signalled an important turn in the market. Also, in December, the rail average made a shallcw new low while the industrials held above the September low. This divergence has also been evident in the various combined averages. While the Dow-Jones 65-Stock average and the New YorkHerald-Tribune 100-Stock averagehas held above the December low, the New York Times 50-Combined has penetrated the December low by approxi mately a full point. Penetre.tions and fluctuations within a trcding range, such as the seventeen month shelf of the present market, are apt to have le 55 sil';nific!lIlce then those taking place in the clear. \'hile there is an outside possi bili ty tho. t the lows of the declint may have been witnessed at Thursday's low of 171.37, believe a further moderr.te dip into the 171-167 mnge 1.5 more probable. The short trm indicator signalled an oversold position on Friday, but the longer term indicators hve, as yet, failed to give a comparable signal. Also, the technicr.l patterns of individual issues inClicate slightly lOTIer levels. The signal on the short term indicntor may point to a technicnl rally to the 174-175 area to be followed later by a dip into the 171-167 area before the Mjor advance is resumed. Believe the current decline will result in a broadning of the treding range of the past seventeen months and that the eventual penetrtion will be on the upside. Heakness between here and 167 should be useCl for buying recommended issues. Listed below are the possible downside objectives of a number of issues in our recommended list. These should be the buyin3 rrmges for each individual issue regardless of the ction of the averaEes Anerican Cyanamid 38-37, Atchison Topeka & Santa Fe 88-86, Brrnsdall 30, E. Ii. Bliss 26-24, BorE' j';arner 45, Crunpbell I,yant 24, Celotex 22, Chicago t-lorth,st 17-16, Distillers Seagram 13, Doehler- Jarvis 31, Eagle Picher 20, Elliott 16-15, Flir,tkote 3Q-28, General Railway Signal 22-20, Hewitt Robins 23-21, Illinois Central 28-26, Interlake Iron 12-11, Inter- national Minere.ls 27-25, International Paper 47-45, Joy Mfg. 33-31, Kanse.s City Southern 24-23, Phelps Dodge 41-40, Rayonier 23, Revere Copper 16-14, Schenley 28-25, Shamrock Oil & Gas 27-25, Sharon Steel 30-27, Simmons 29, S0uthern Pacific 44-43, Union Carbide 92-87, Wheeling Steel 37-35, Youngstown Sheet & Tube 7Q-66. Some of these issues have reached inclice.ted downside objctives but the majori ty arE. a point or two away. EDMUND W. TABELL January 23, 1948 SHIELDS & COMPANY The opInions exprened in ')'is letter 21111 Jbe pel,,!, JntearJo of charts hy Mr. Edmund W. labell and are not preJented as the OStlnionl of Shietds & COrnperyy. —