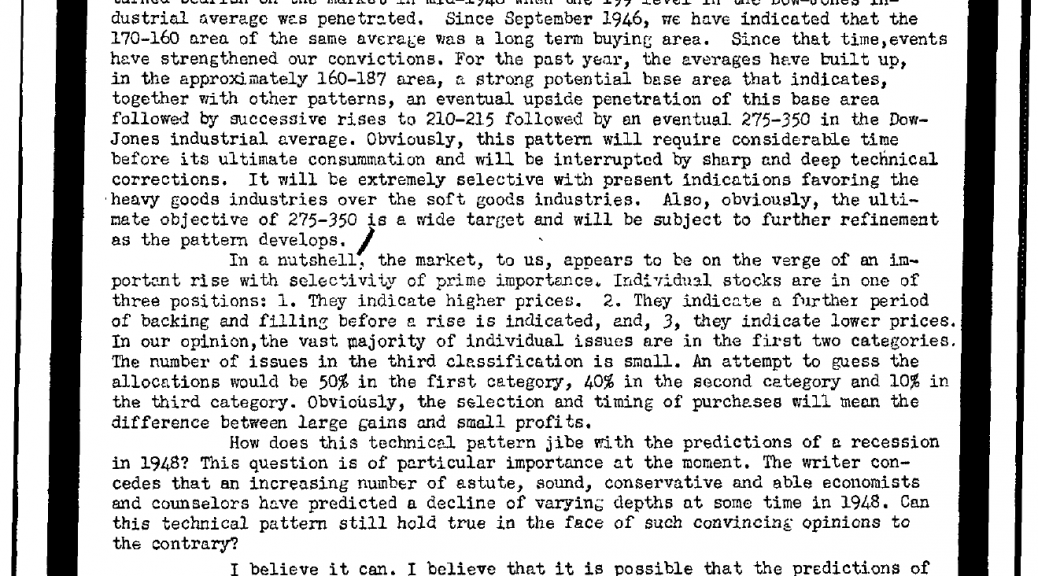 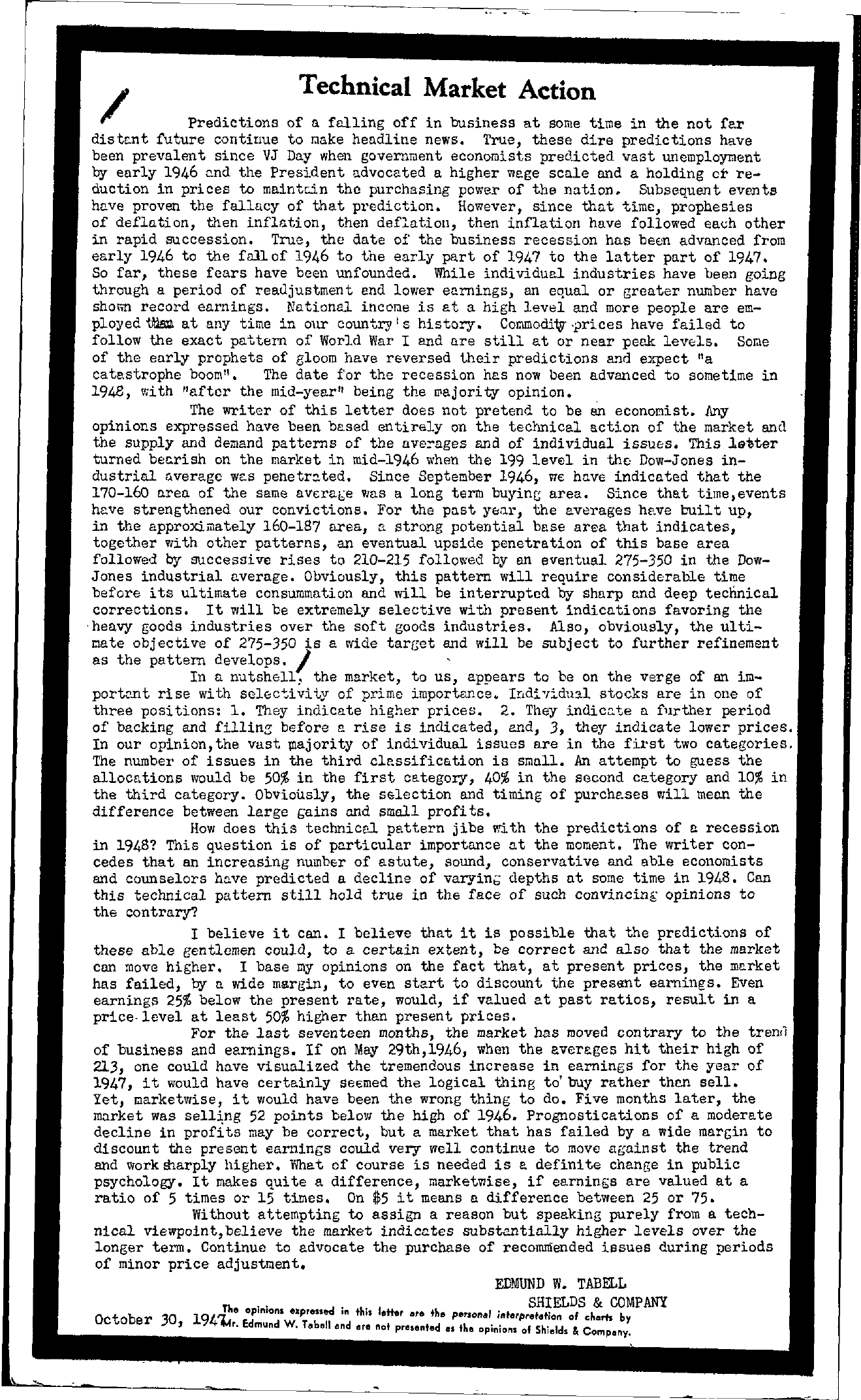 Technical Market Action Predictions of a falling off in business at some time in the not far distllt future continue to f.lske headline news. True, these dire predictions have been prevalent since VJ Day when government economists predicted vast unemployment early 1946 Qnd the President advocated a higher wage scale and a holding cr reduction in prices to maintc.in tho purchasing power of the nation. Subsequent events haVe proven the fallacy of that prediction. However, since that time, propheSies of deflation, then inflation, then deflation, then inflation have followed each other in rapid succession. True, the date of the business recession has been advanced from early 1946 to the fallof 1946 to the early part of 1947 to the latter part of 1947. So far, these fears have been unfounded. While individual industries have been going through a period of reaujustment end lower earnings, an equal or greater number have shown record earnings. National incof.le is at a high level and more people are em- ployed iliBn at any time in our country I s history. Cor.unodiWprices have failed to follow the exact pattern of World War I and are still at or near peak lev01s. SOf.le of the early prophets of eloom have reversed their predictions and expect a cate.strophe boom. The date for the recession has now been advanced to sometime in 1948, with after the mid-year being the I11ajority opinion. The writer of this letter does not pretend to be an econoist. Any opinions expressed have been based entirely on the technical action of the market and the supply and demand patterns of the nveages and of individual issues. This 18ter turned berish on the market in mid-1946 when the 199 level in the Dow-Jones in- dustrial average was penetrted. Since Septeber 1946, we hve indicated that the 170-160 o.rea of the same avcrabe was a long term buyinG area. Since that time,6vents have strengthened our conVictions. For the past Y0ur, the avrages have built up, in the approximately 160-187 area, a strong potential base area that indicates, together with other po.tterns, an eventual upside penetration of this base area followed successive rises to 210-215 followed by en eventual 275-350 in the Dow- Jones industrial avero.ge. Obviously, this pattern will require considerable time before its ultimate consummo.tion and will be interrupted sho.rp o.nd deep tecnnical corrections. It will be extremely selective with present indications favoring the heavy goods industries over the soft goods industries. Also, obviously, the ulti- I!l8.te objective of 275-350 is a wide tar(;et and will be subject to further refinement as the pattern develops. , In a nutshell, the market, to us, appears to be on the verge of an im- portent rise with selecivity of prime importrulce. IndiyiduJ.l stocks are in one of three positions 1. They indicate higher prices. 2. They indico.te a fl1rther period of backing and fillin before a rise is indicated, and, 3, they indicate lower prices. In our opinion,the vast majority of individual issues are in the first two categories. The number of issues in the third classification is small. An attempt to guess the allocations would be 50 in the first category, 40 in the second category and 10 the third category. Obvioilsly, the selection and timing of purche.ses will meen the difference between large bains and small profits. How does this technical pattern jibe with the predictions of a receSSion in 1948 This question is of particular importance at the moment. The writer con- cedes that an increasing number of astute, sound, conservative and able economists and counselors have predicted a decline of varyin depths at some time in 1948. Can this technical pattern still hold true io the face of such convincing opinions to the contrary I believe it can. I believe that it is possible that the prEdictions of these able gentlemen could, to a certain extent, be correct and also that the market can move higher. I base my opinions on the fact that, at present prices, the market has failed, by a wide margin, to even start to discount the presEIIlt earnings. Even earnings 25 below the present rate, would, if valued at past ratiOS, result in a price. level at least 50 higher than present prices. For the last seventeen months, the market has moved contrary to the trwil of business and earnings. If on May 29th ,1946, when the averages hit their high of 213, one could have visualized the tremendous increase in earnings for the year of 1947, it would have certainly seEmed the logical thing to'buy rather then sell. Yet, marketWise, it would have been the wrong thing to do. Five months later, the murket was selling 52 points belovl the high of 1946. Prognostications of a moderate decline in profits may be correct, but a market that has failed by a wide marGin to discount the present earninGS could very well continue to move against the trend and worklharply higher. What of course is needed is a definite chanr;e in public psychology. It makes quite a difference, marketwise, if earnings are valued at a ratio of 5 times or 15 times. On 5 it means a difference between 25 or 75. Without attempting to assign a reason but speaking purely from a technical viewpoint,believe the market indicates substantially higher levels over the longer term. Continue to advocate the purchase of recommended issues during periods of minor price adjustment. EDMUND W. TABELL 19416 .. . oplnlOS expressed In this letter ar. the pe'onal SHIELDS & COMPANY inte,pretdtion 01 cherts by r. Edmund W. Tabel! end lilt. not presented as the opinions of Shields & Company.