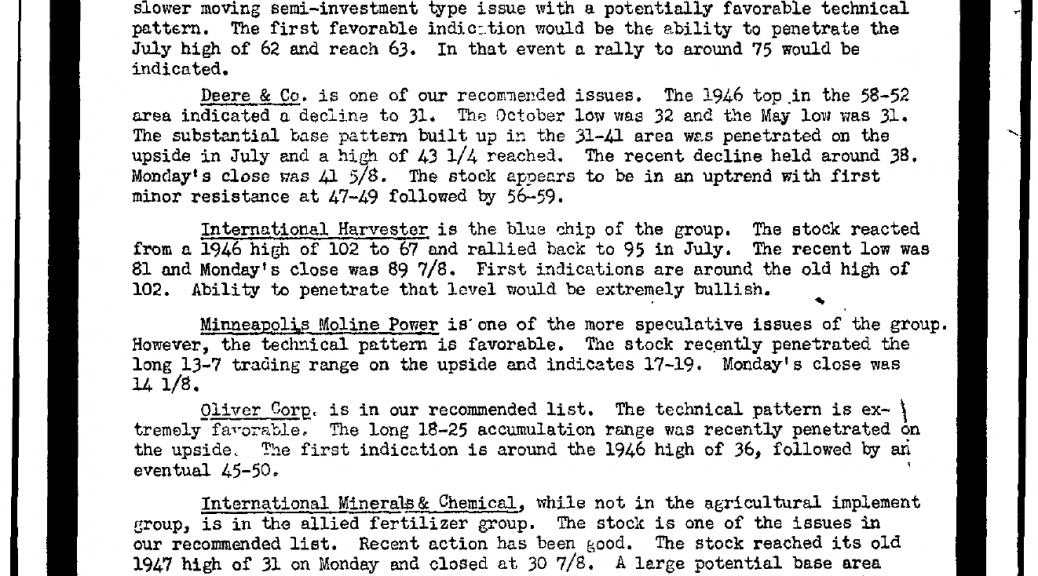 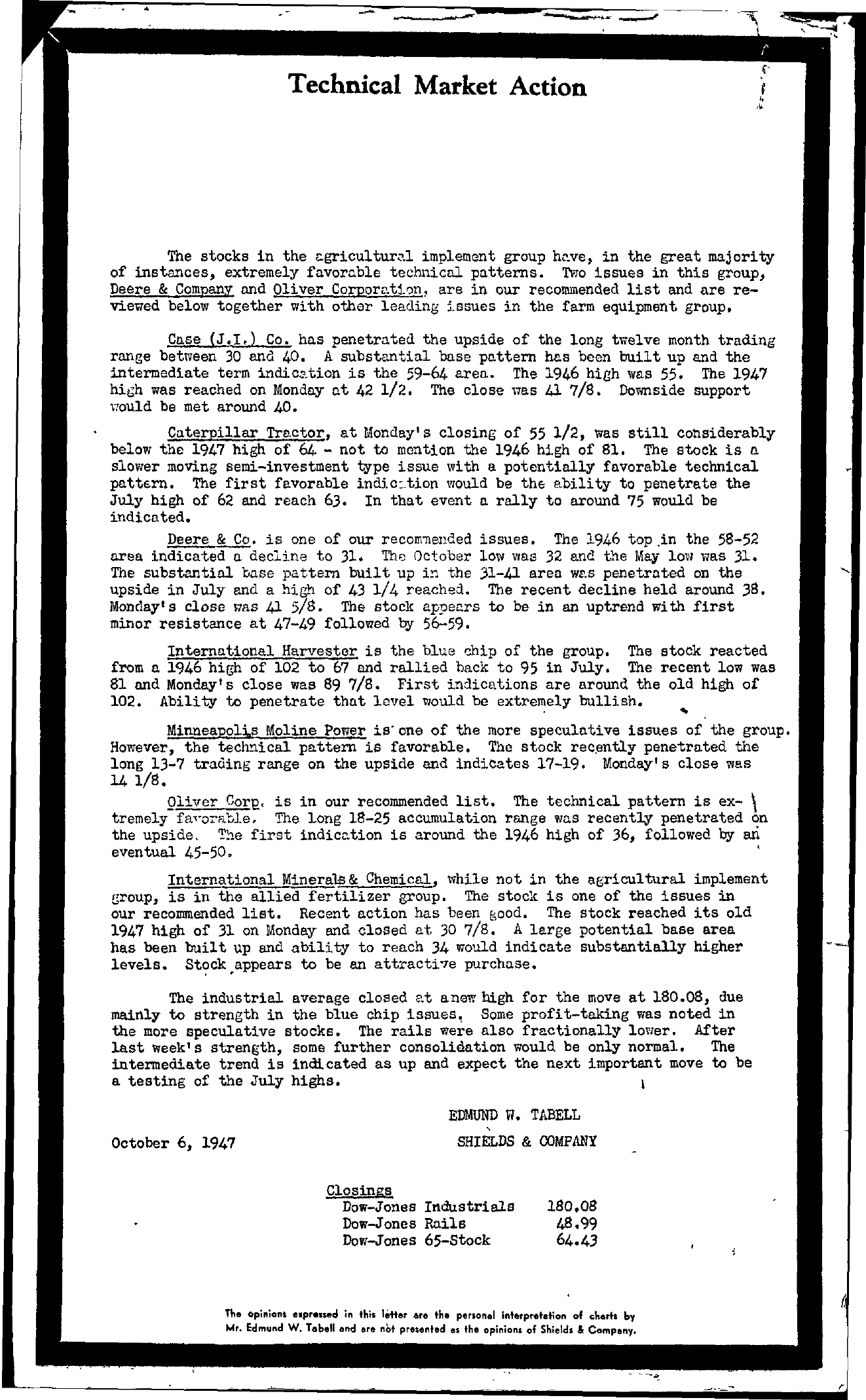 Technical Market Action .I The stocks in the cgricultural implement group have, in the great majority of instances, extremely favorable tecm,ical patterns. 10 issues in this group, Deere & Company and Oliver Corporutl.'Jn, are in our recommended list and are re- viewed below together with other leading issues in the farm equipment group. Case (J.I.) Co. has penetrated the upside of the long twelve month trading range between 30 and 40. A substantial base pnttern has been built up and the intermediate term indication is the 59-64 area. The 1946 high was 55. The 1947 high was reached on Monday at 42 1/2. The close was 41 7/8. Downside support ould be met around 40. Caterpillar Tractor, at Monday's closing of 55 1/2, was still considerably below the 1947 high of 64 – not to mention the 1946 high of 81. The stock is !l slower moving semi-investment t,ype issue with a potentiallY favorable technical pattrn. The first favorable indic.tion would be the e.bili ty to penetrate the July high of 62 and reach 63. In that event a rally to around 75 would be indicated. Deere & Co. is one of our recomllended issues. The 1946 top .in the 58-52 area indicated n decline to 31. Th8 October low was 32 and the May 10Vl was 31. The substantial base pattern built up i the 31-41 area was penetrated on the upside in July and a hi& of 43 1/4 reached. The recent decline held around 38. Monday's close l7as 41 5/'13. The stock apperrs to be in an uptrend wi th first minor resistance at 47-49 followed qy 56-59. International Harvester is the blue chip of the group. The stock reacted from a 1946 high of 102 to 67 and rallied hack to 95 in July. The recent low was 81 and Monday's close was 89 7/8. First indications are around the old high of .102. Ability to penetrate that lovel would be extremely bullish. Minneapolis Moline Power is' one of the more speculntive issues of the group. However, the technical pattern is favorable. The stock recnt1y penetrated the long 13-7 trading range on the upside and indicates 17-19. Monday's close was 14 1/8. Qliver Cor, is in our recommended list. The technical pattern is ex- \ tremely fa'orF,t1e. The long 18-25 accumulation range was recently penetrated on anthe upside, he first indicrtion is around the 1946 high of 36, followed qy eventual 45-50. ' International Minerals & Chemical, while not in the agricultural implement Group, is in the allied fertilizer group. The stock is one of the issues in our recommended list. Recent action has been ood. The stock reached its old 1947 high of 31 on Monday and closed at 30 7/8. A large potential base area has been built up and ability to reach 34 would indicate substantially higher .levels. Sto,ck appears to be an attracti7e purchase. The industrial average closed at anewbigh for the move at 180.08, due mainly to strength in the blue chip issues, Some profit-taking was noted in the more speculative stocks. The rails were also fractionally lower. After last week's strength, some further consolidation would be only normal. The intermediate trend is indicated as up and expect the next important move to be a testing of the July highs. I October 6, 1947 EDMUN,D VI. TABELL SHIELDS & OOMPANY Closings Dow-Jones Industrials Dow-Jones Rails Dow-Jones 65-Stock 180.08 48.99 64.43 The opinions elpr.lSed in this letter ate tho personal int&rpretetion of chem by Mr. Edmund W. Tabell end oro ntt presented as the opinions of Shields & Company.