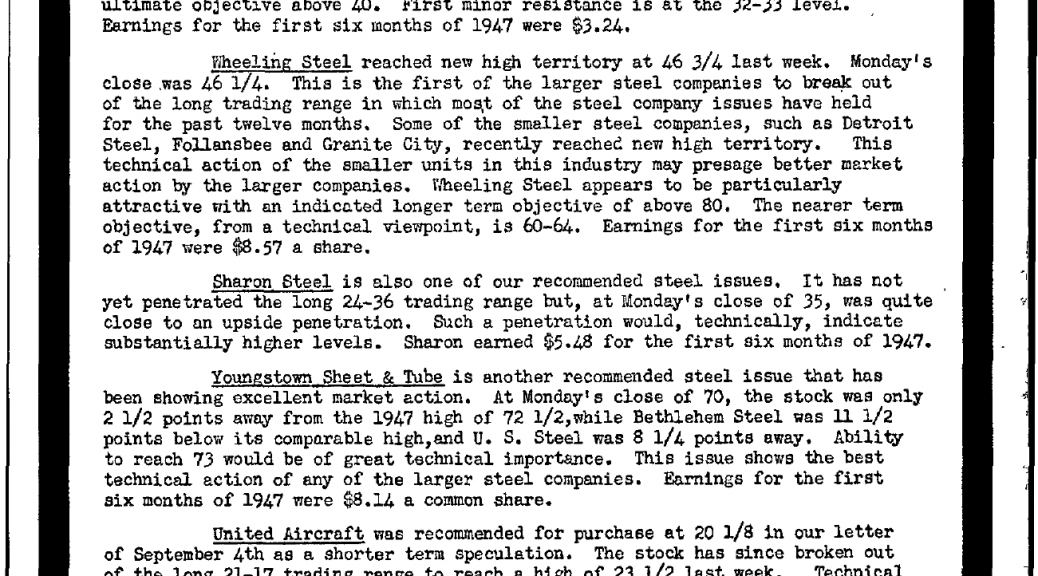 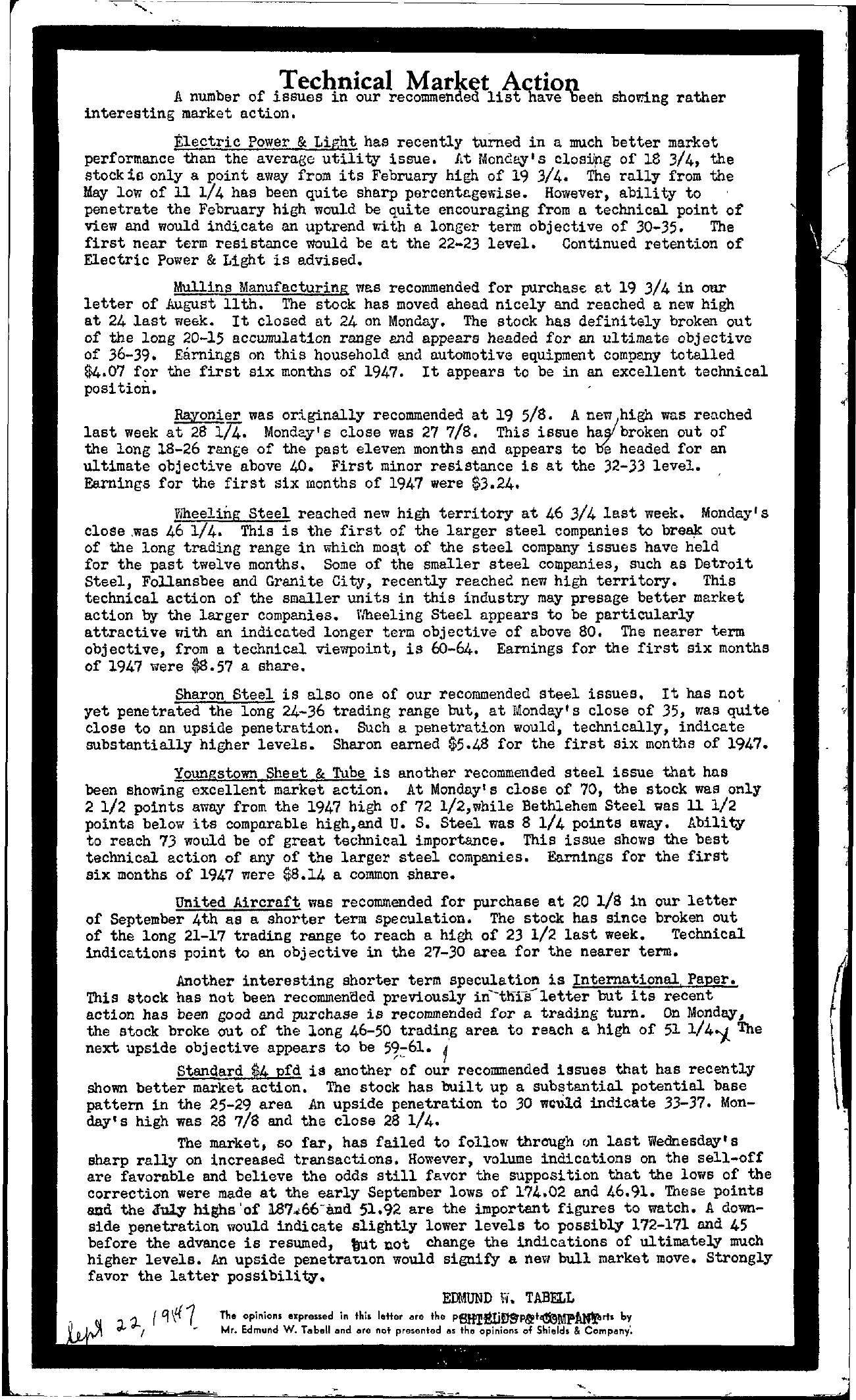 Technical Market Action A number of issues in our recommended list bavelDeen shong rather interesting market action. Electric Power &Light has recently turned in a much better market performance than the average utility issue. At MonGay IS closiJrg of 18 3/4, the stock ill only a point away from its February high of 19 3/4. The rally from the May low of 11 1/4 has been quite sharp percentagewise. However, ability to penetrate the February high would be quite encouraging from a technical point of view and would indicate an uptrend with a longer term objective of 30-35. The first near term reSistance would be at the 22-23 level. Continued retention of Electric Power &Light is advised. Mullins Manufacturing was recommended for purchase at 19 3/4 in our letter of August 11th. The stock has moved ahead nicely and reached a new high at 24 last week. It closed at 24 on Monday. The stock has definitely broken out of the long 20-15 accumulation range and appears headed for an ultimate objective of 36-39. Earnings on this household and automotive equipment company totalled 4.07 for the first six months of 1947. It appears to be in an excellent technical position. last week Rayonier was originally recommended at at 28 174. Monday's close was 277/8. 19 5/8. A This issue nhewbhriogkhenwaos urteaocfhed the long 18-26 range of the past eleven months and appears to le headed for an ultimate objective above 40. First minor resistance is at the 32-33 level. Earnings for the first six months of 1947 were 3.24. Vfueeling Steel reached new high territory at 46 3/4 last week. Monday's close ,was 46 1/4. This is the first of the larger steel companies to bre out of the long trading range in which mot of the steel company issues have held for the past twelve months. Some of the smaller steel companies, such as Detroit Steel, Follansbee and Granite City, recently reachec new high territory. This technical action of the smaller units in this industry may presage better market action by the larger companies. ffueeling Steel appears to be particularly attractive with an indicated longer term objective of above 80. The nearer term objective, from a technical viewpoint, is 60-64. Earnings for the first six months of 1947 were 8.57 a share. Sharon Steel is also one of our recommended steel issues. It has not yet penetrated the long 24-36 trading range but, at Monday's close of 35, was quite close to an upside penetration. Such a penetration WOUld, technically, indicate substantially higher levels. Sharon earned 5.48 for the first six months of 1947. Youngstown Sheet & Tube is another recommended steel issue that has been showing excellent market action. At Monday's close of 70, the stock was only 2 1/2 points away from the 1947 high of 72 1/2,while Bethlehem Steel was 11 1/2 points below its compo.rable high,and U. S. Steel was 8 1/4 points away. Ability to reach 73 would be of great technical importance. This issue shows the best technical action of any of the larger steel companies. Earnings for the first six months of 1947 were 8.14 a common share. United Aircraft was recommended for purchase at 20 1/8 in our letter of September 4th as a shorter term speculation. The stock has since broken out of the long 21-17 trading range to reach a high of 23 1/2 last week. Technical indications point to an objective in the 27-30 area for the nearer term. Another interesting shorter term speculation is International Paper. This stock has not been recommentled previously in-tnis-letter but its recent action has been good and purchase is recommended for a trading turn. On Monday. the stock broke out of the long 46-50 trading area to reach a high of 51 l/4'j. The 1next upside objective appears to be 56l. Standard 4 pfd is another of our recommended issues that has recently shown better market action. The stock has built up a substantial potential base pattern in the 25-29 area An upside penetration to 30 wcUJ.d indicate 33-37. Monday's high was 287/8 and the c10se 28 1/4. The market, so far, has failed to follow through ()n last Wednesday 's sharp rally on increased transactions. However, volume indications on the sell-off are favorable and believe the odds still favor the supposition that the lows of the correction were made at the early September lows of 174.02 and 46.91. These points SDd the July hiShs 'of 187..66-iuld 51.92 are the important figures to watch. A downside penetration would indicate slightly lower levels to possibly 172-171 and 45 before the advance is resumed, bUt not change the indications of ultimately much higher levels. An upside penetrao10n would signify a new bull market move. Strongly favor the latter possibility. EDMUND Ii. TABELL 11Ie opinions eIpressed in this lotter ore the P6m!DDS'pc!tt\!lgMPlUftGrts by Mr. Edmund W. Tabel! and ore not presented as the opinions of Shields & Compo!lny