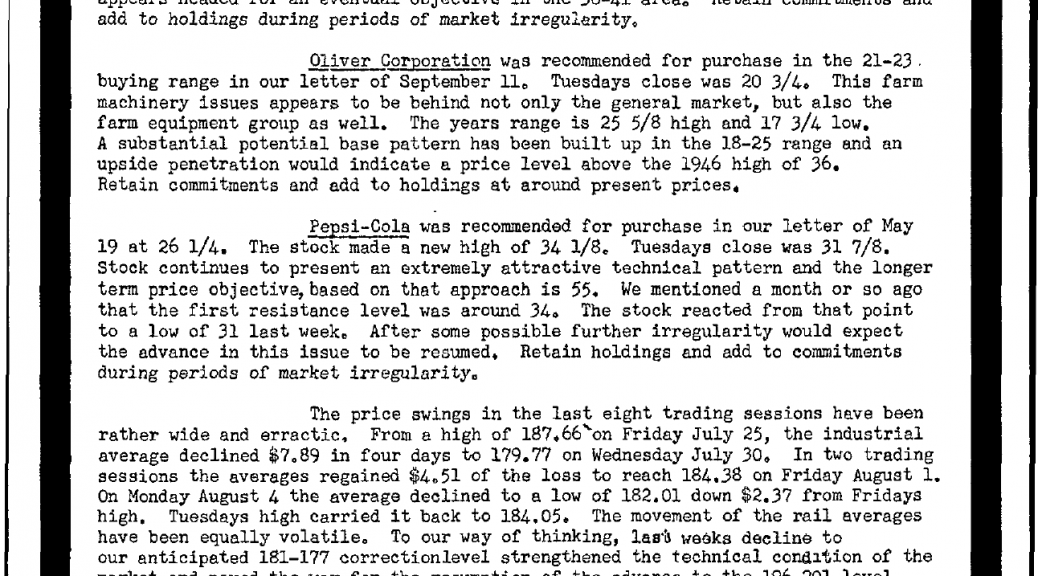 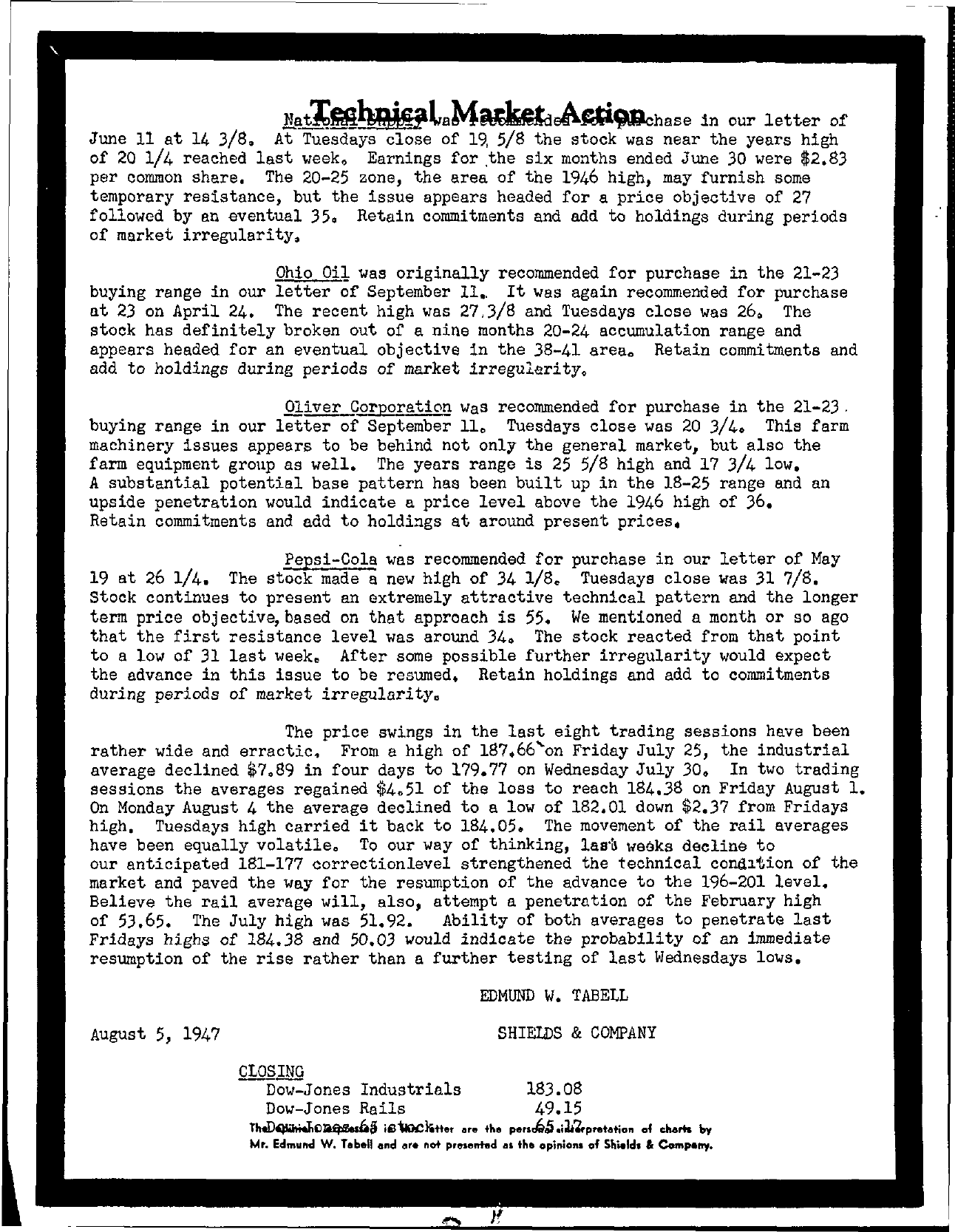 Technical Market Action National supply was recommended for purchase in our letter of June 11 at 14 3/8. At Tuesdays close of 19, 5/8 the stock was near the years high of 20 1/4 reached last week. Earnings for ,the six months ended June 30 were 2.83 per common share. The 20-25 zone, the area of the 1946 high, may furnish some temporary resistance, but the issue appears headed for a price objective of 27 followed by an eventual 35. Retain commitments and add to holdings during periods of market irregularity. Ohio Oil was originally recommended for purchase in the 21-23 buying range in our letter of September ll., It was again recommended for purchase at 23 on April 24. The recent high was 27,3/8 and Tuesdays close was 26. The stock has definitely broken out of a nine months 20-24 accumulation range and appears headed for an eventual objective in the 38-41 area. Retain commitments and add to holdings during periods of market irregularity, Oliver Corporatiog WaS recommended for purchase in the 21-23 ' buying range in our letter of September II. Tuesdays close was 20 3/4. This farm machinery issues appears to be behind not only the general market, but also the farm equipment group as well. The years range is 25 5/8 high and 17 3/4 low. A substantial potential base pattern has been built up in the 18-25 range and an upside penetration would indicate a price level above the 1946 high of 36. Retain commitments and add to holdings at around presen' prices. Pepsi-Cola was recommended for purchase in our letter of May 19 at 26 1/4. The stock made a new high of 34 1/8. Tuesdays close was 31 7/8. Stock continues to present an extremely attractive technical pattern and the longer term price objective,based on that approach is 55. We mentioned a month or so ago that the first resistance level was around 34. The stock reacted from that point to a low of 31 last week. After some possible further irregularity would expect the advance in this issue to be resumed. Retain holdings and add to commitments during periods of market irregularity. The price swings in the last eight trading sessions have been rather wide and erractic. From a high of 187.66'on Friday July 25, the industrial average declined 7.89 in four days to 179.77 on Wednesday July 30. In two trading sessions the averages regained 4.51 of the loss to reach 184.38 on Friday August 1. On Monday August 4 the average declined to a low of 182.01 down 2.37 from Fridays high. Tuesdays high carried it back to 184.05. The movement of the rail averages have been equally volatile. To our way of thinking, las' weeks decline to our anticipated 181-177 correctionlevel strengthened the technical condtion of the market and paved the way for the resumption of the advance to the 196-201 level. Believe the rail average will, also, attempt a penetration of the February high of 53.65. The July high was 51.92. Ability of both averages to penetrate last Fridays highs of 184.38 and 50.03 would indicate the probability of an immediate resumption of the rise rather than a further testing of last Wednesdays lows. EDMUND W. TABELL August 5, 1947 SHIELDS & COMPANY CLOING Dow-Jones Industrials 183.08 Dow-Jones Rails 49.15 ThilJiiPllesQ6 ;Slioclitt.r or. th J/a .;J;7….teo 01 che' by t-Ar. Edmund W. Tab and ar. not prl,.ented al the opinion. of Shield, & eom.,.ny.