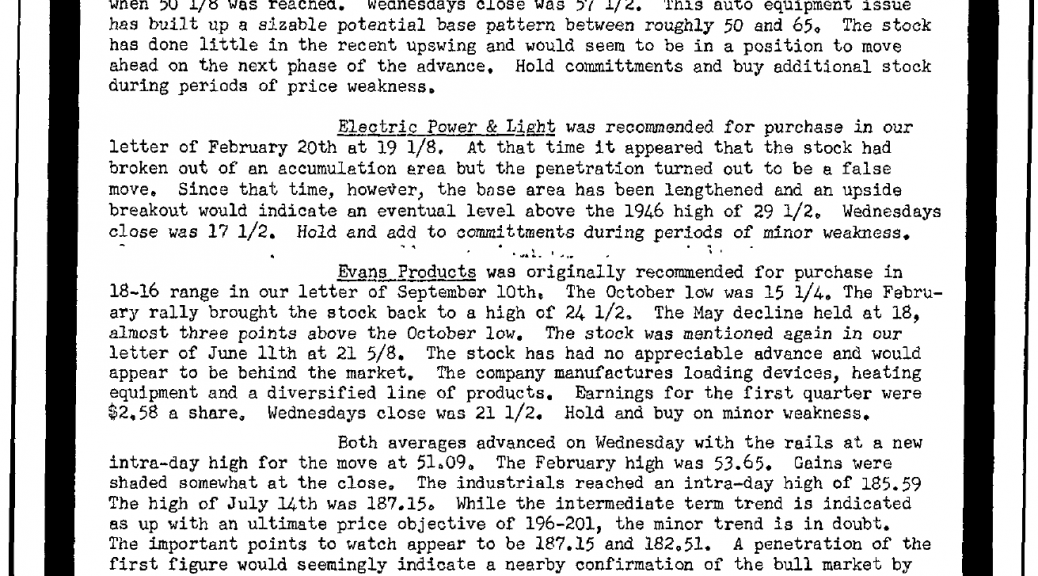 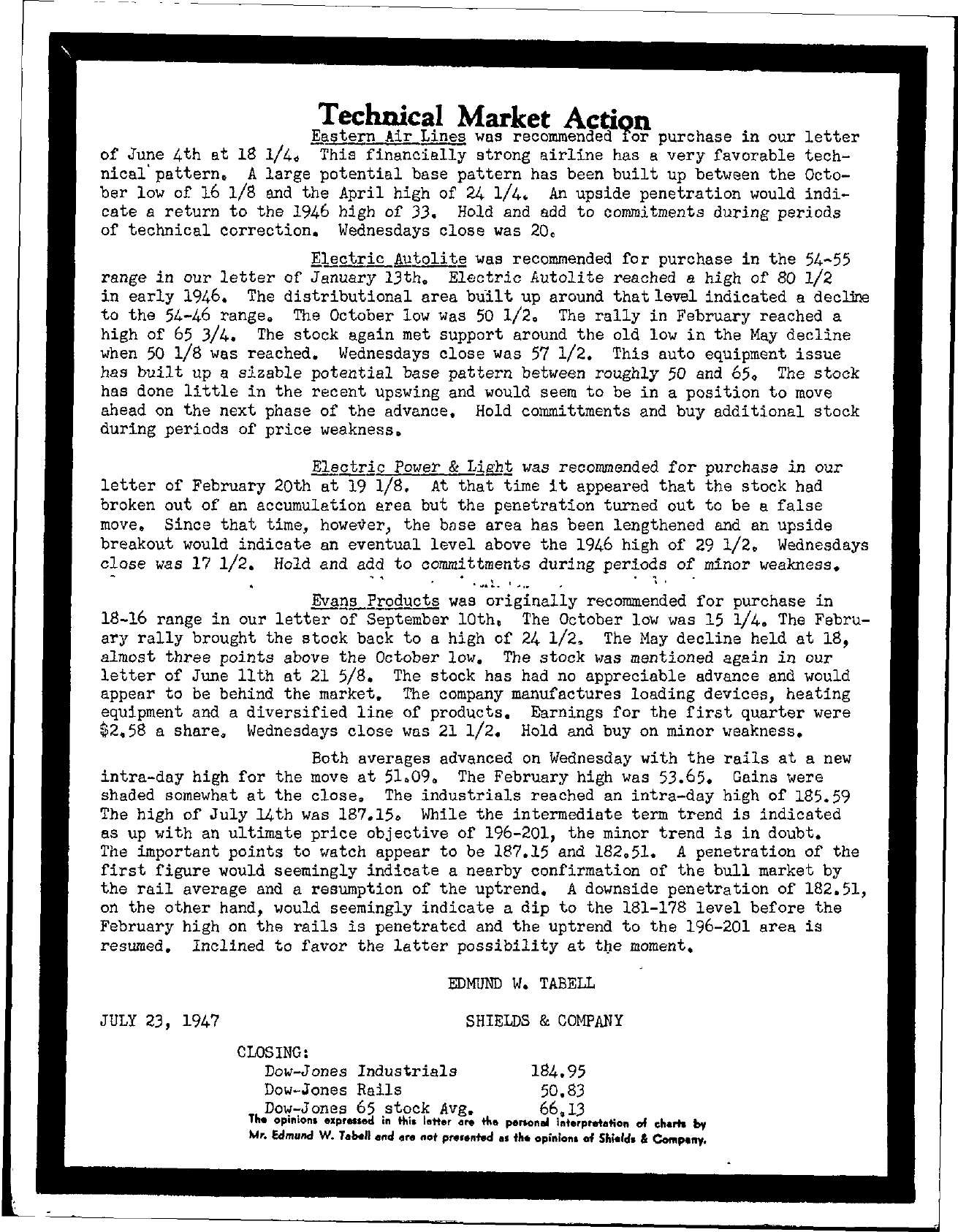 Technical Market Action Eastern Air Lines was recommended for purchase in our letter of June 4th at 18 1/4. This financially strong airline has a very favorable technical'pattern, A large potential base pattern has been built up between the Octo- ber low of 16 1/8 and the April high of 24 1/4. An upside penetration would indi- cate a return to the 1946 high of 33. Hold and add to commitments during periods of technical correction. Wednesdays close was 20, !lectric Autolit was recommended for purchase in the 54-55 range in our letter of January 13th. Electric Autolite reached a high of 80 1/2 in early 1946. The distributional area built up around that level indicated a declme to the 54-46 range. The October low was 50 1/2. The rally in February reached a high of 65 3/4. The stock again met support around the old low in the May decline when 50 1/8 was reached. Wednesdays close was 57 1/2. This auto eqUipment issue has built up a sizable potential base pattern between roughly 50 and 65. The stock has done little in the recent upswing and would seem to be in a position to move ahead on the next phase of the advance. Hold committments and buy additional stock during periods of price weakness. E1eQ1r1c Power & L1gb! was recommended for purchase in our letter of February 20th at 19 1/8. At that time it appeared that the stock had broken out of an accumulation area but the penetration turned out to be a false move. Since that time, however, the bDse area has been lengthened and an upside breakout would indicate an eventual level above the 1946 high of 29 1/2. Wednesdays close was 17 1/2. Hold and add to commttments during perios of minor weakness . … 1. I ,. Evans Products was originally recommended for purchase in 18-16 range in our letter of September 10th, The October low was 15 1/4. The February rally brought the stock back to a high of 24 1/2. The May decline held at 18, almost three points above the October low. The stock was mentioned again in our letter of June 11th at 21 5/8. The stock has had no appreciable advance and would appear to be behind the market. The company manufactures loading devices, heating eqUipment and a diversified line of products. Earnings for the first quarter were 2,58 a share, vlednesdays close was 21 1/2. Hold and buy on minor weakness. Both averages advanced on Wednesday with the rails at a new intra-day high for the move at 51,09. The February high was 53.65. Gains were shaded somewhat at the close, The industrials reached an intra-day high of 185.59 The high of July 14th was 187.15. While the intermediate term trend is indicated as up with an ultimate price objective of 196-201, the minor trend is in doubt. The important points to watch appear to be 187.15 and 182.51. A penetration of the first figure would seemingly indicate a nearby confirmation of the bull market by the rail average and a resumption of the uptrend. A downside penetration of 182.51, on the other hand, would seemingly indicate a dip to the 181-178 level before the February high on the rails is penetrated and the uptrend to the 196-201 area is resumed. Inclined to favor the latter possibility at tQe moment. EDMUND W. TABELL JULY 23, 1947 SHIELDS & COMPANY CLOSING Dow-Jones Industrials 184.95 Dow-Jones Rails 50.83 DoJones 65 ,stck Avg. 66,13 Th. opinIOn. expreued In thIS letter are the penonal interpretation of ch….. hy M,. Ecfmund W. TaIMIl .nd ere not pre.ented a. th. opinion. of Sht.'d. , eon..,.ny.