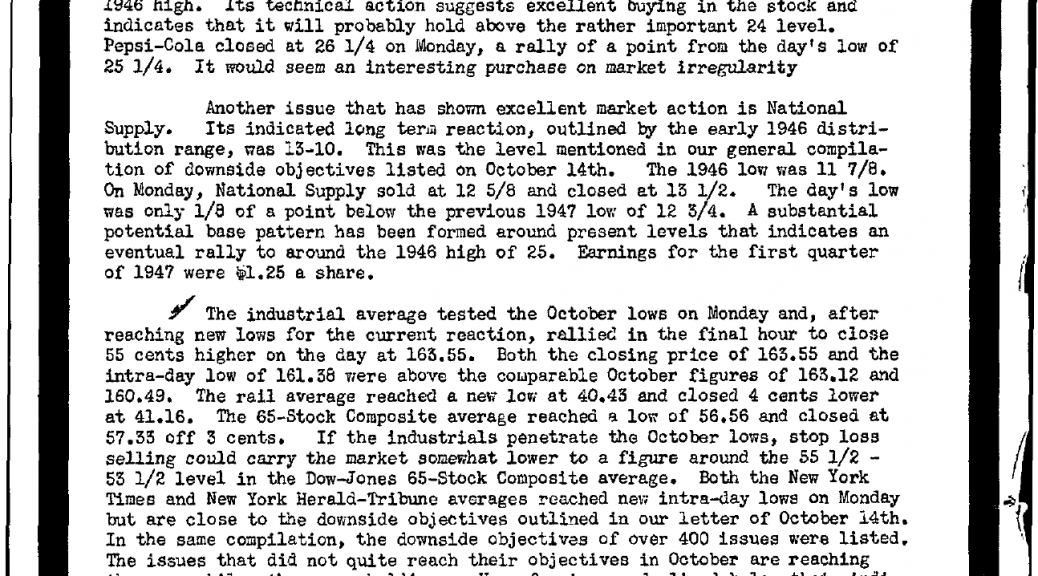 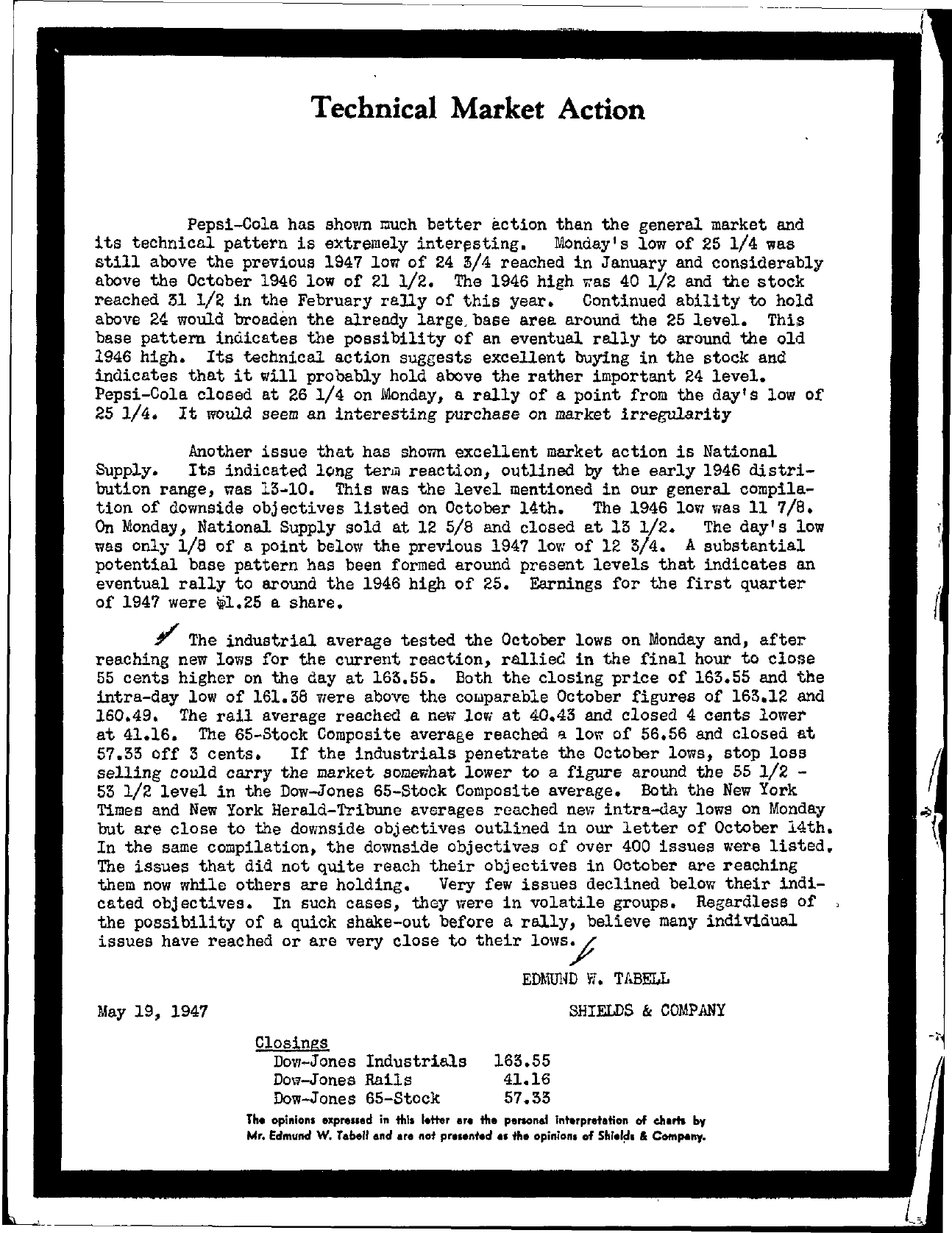 Technical Market Action Pepsi-Cola has shom ouch better action than the general market and its technical pattern is etremely interesting. Monday's low of 25 1/4 was still above the previous 1947 low of 24 3/4 reached in January and considerably above the October 1946 low of 21 1/2. The 1946 high as 40 1/2 and the stock reached 31 1/2 in the February rally of this year. Continued ability to hold above 24 would broaden the already large. base area around the 25 level. This base pattern indicates the possibility of an eventual rally to around the old 1946 high. Its technical action suggests excellent buying in the stock and indicates that it will probably hold above the rather important 24 level. Pepsi-Cola closed at 26 1/4 on Monday, a rally of a point from the day's low of 25 1/4. It would seem an interesting purchase on market irregularity Another issue that has shown excellent market action is National Supply. Its indicated long ter,. reaction, outlined by the early 1946 distribution range, was 15-10. This was the level mentioned in our general compilation of downside objectives listed on October 14th. The 1946 low was 11 7/8. On Monday, National Supply sold at 12 5/8 and closed at 15 1/2. The day's low was only 1/8 of a point below the previous 1947 10Vi of 12 5/4. A substantial potential base pattern has been formed around present levels that indicates an eventual rally to around the 1946 high of 25. Earnings for the first quarter of 1947 were 1.25 a share. The industrial average tested the October lows on Monday and, after reaching new lows for the current reaction, rallie(! in the final hour to close 55 cents higher on the day at 165.55. Both the clOSing price of 165.55 and the intra-day low of 161.38 were above the cOhlparable October figures of 165.12 and 160.49. The rail average reached a nel1 lOVi at 40.45 and closed 4 cents lower at 41.16. The 65-Stock Composite average reached a low of 56.56 and closed at 57.35 off 5 cents. If the industrials penetrate the October lows, stop loss selling could carry the market som9l1hat lower to a figure around the 55 1/2 55 1/2 level in the Dow-Jones 65-Stock Composite average. Both the New York Times and New York Herald-Tribune averages reached nel, intra-day lows on Monday but are close to the downSide objectives outlined in our letter of October 14th. In the same compilation, the downside objectives of over 400 issues were listed. The issues that did not quite reach their objectives in October are reaching them now while otilers are holding. Very few issues declined below their indicated objectives. In such cases, they were in volatile groups. Regardless of the possibility of a quick shake-out before a rally, believe many individual issues have reached or are very close to their lOWS! May 19, 1947 EDMUND 'ii. TABE!.L SHIELDS & COMPANY Closings Dow-Jones Industrials Dow-Jones Rails Dow-Jones 65-Stock 165.55 41.16 57.35 Th. opinions .,preued in this I.tter ere the penon&1 interpretation of cham by ,Mr. Edmund W. rabell and are nat pr…n'hd 4' the opinions of SM.r. eomp.lny.