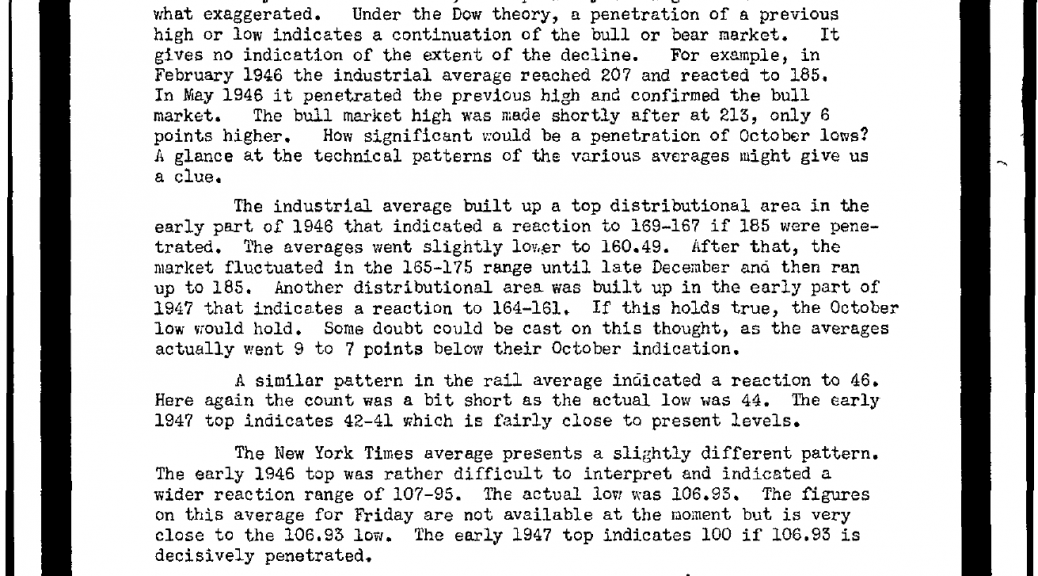 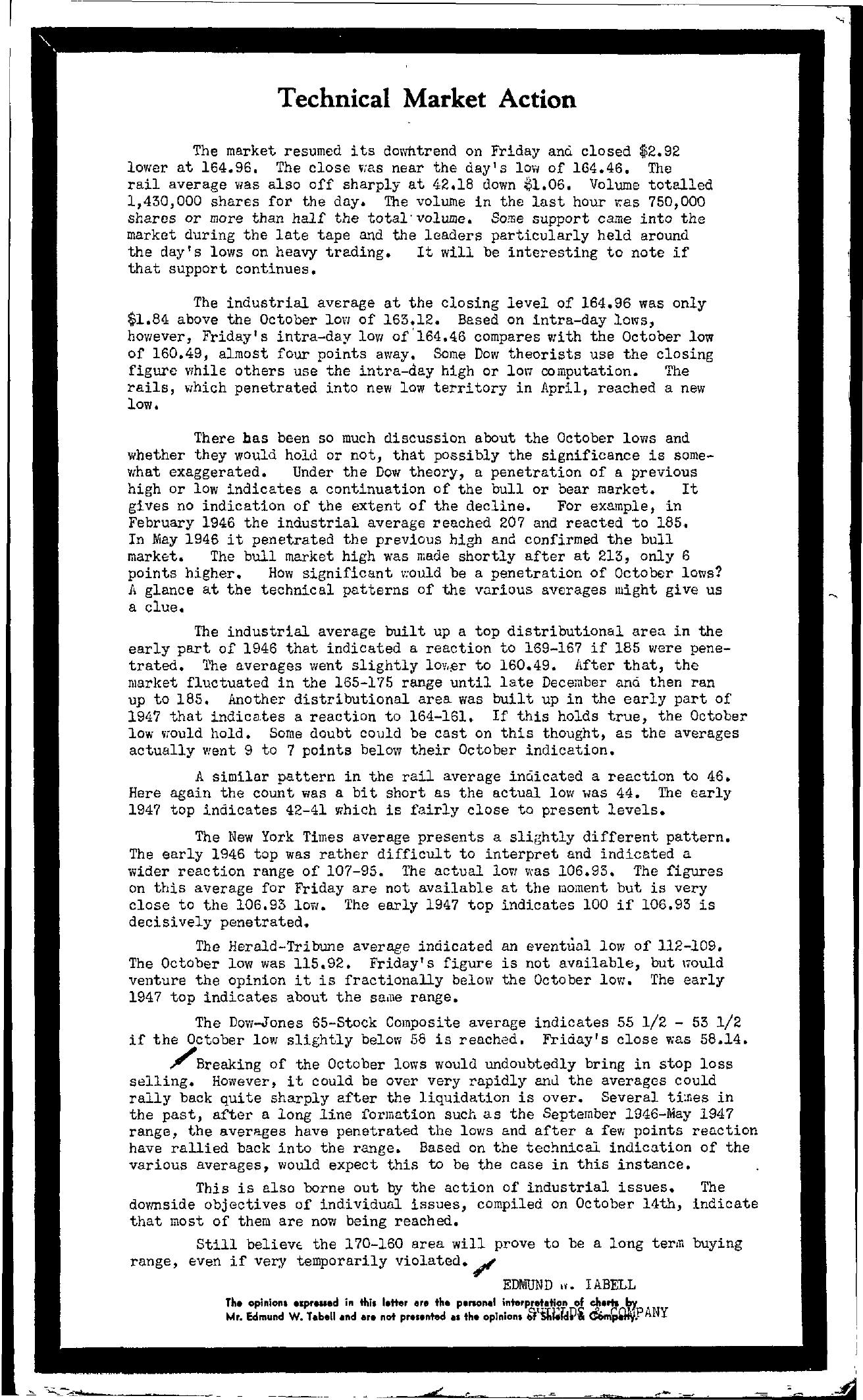 Technical Market Action The market resumed its downtrend on Friday ano. closed 2.92 lower at 164.96. The close v;as near the day's low of 164.46. The rail average was also off sharply at 42.18 down 1.06. Volume totalled 1,430,000 shares for the day. The volume in the last hour ..as 750,000 shares or more than half the total'volume. Some support c&e into the market during the late tape and the leaders particularly held around the day's lows on heavy trading. It will be interesting to note if that support continues. The industrial average at the closing level of 164.96 was only 1.84 above the October lo\'/ of 165.12. Based on intra-day lows, however, Friday' 5 intra-day lovi of'164.46 compares with the October low of 160.49, almost four points away. Some Dow theorists use the closing figure while others use the intra-day high or low computation. The rails, ,hich penetrated into new low territory in April, reached a new low. There bas been so much discussion about the October lows and whether they would hold or not, that possibly the significance is some- what exaggerated. Under the Dow theory, a penetration of a previous high or low indicates a continuation of the bull or bear market. It gives no indication of the extent of the decline. For example, in February 1946 the industrial average reached 207 and reacted to 185. In May 1946 it penetrated the previous high and confirmed the bull marke,t. The bull market high was made shortly after at 215, only 6 points higher. How Significant ,could be a penetration of October lows A glance at the technical patterns of the various averages might give us a clue. The industrial average built up a top distributional area in the early part of 1946 that indicated a reaction to 169-167 if 185 were penetrated. The averages went slightly lO'i.,er to 160.49. After that, the market fluctuated in the 165-175 range until late December ano. then ran up to 185. Another distributional area was built up in the early part of 1947 that indicates a reaction to 164-161. If this holds true, the October low \'iould hold. Some doubt could be cast on this thought, as the averages actually went 9 to 7 points belOW their October indication. A similar pattern in the rail average in6.icated a reaction to 46. Here again the count was a bit short as the actual low ..as 44. The early 1947 top indicates 42-41 which is fairly close to present levels. The New York Times average presents a slightly different pattern. The early 1946 top was rather difficult to interpret and indicated a wider reaction range of 107-95. The actual 10Vl Vias 106.95. The figures on this average for Friday are not available at the r.loment but is very close to the 106.95 low. The early 1947 top indicates 100 if 106.93 is decisively penetrated. The Herald-Tribune average indicated an eventual low of 112-109. The October low was 115.92. Friday's figure is not available, but \70uld venture the opinion it is fractionally below the October lovi. The early 1947 top indicates about the saine range. The Dow-Jones 65-Stock Composite average indicates 55 1/2 – 55 1/2 if the October low slightly below 58 is reached. Friday's close was 58.14. /Breaking of the October lows would undoubtedly bring in stop loss selling. However, it could he over very rapidly anJ. the averages could rally back quite sharply after the liquidation is over. Several tines in the past, after a long line formation such as the September 1946-May 1947 range, the averages have penetrated the 10Vis and after a few points reaction have rallied back into the range. Based on the technical indication of the various averages, would expect this to be the case in this instance. This is also borne out qy the action of industrial issues. The dovmside objectives of individual issues, compiled on October 14th, indicate that most of them are now being reached. Still believ the 170-160 area will prove to be a long ter,n buying range, even if very temporarily violated. ; ' EDMUN D . I ABELL n. In,. opinion, e,prNled in Edmund W. T.b.n .nd this .r. I.tter ere the parsona' interpretation of not prnted tho opinion .if'ij;/Oldlli ch….. cfo..,QIY'p ANY , ,J.il