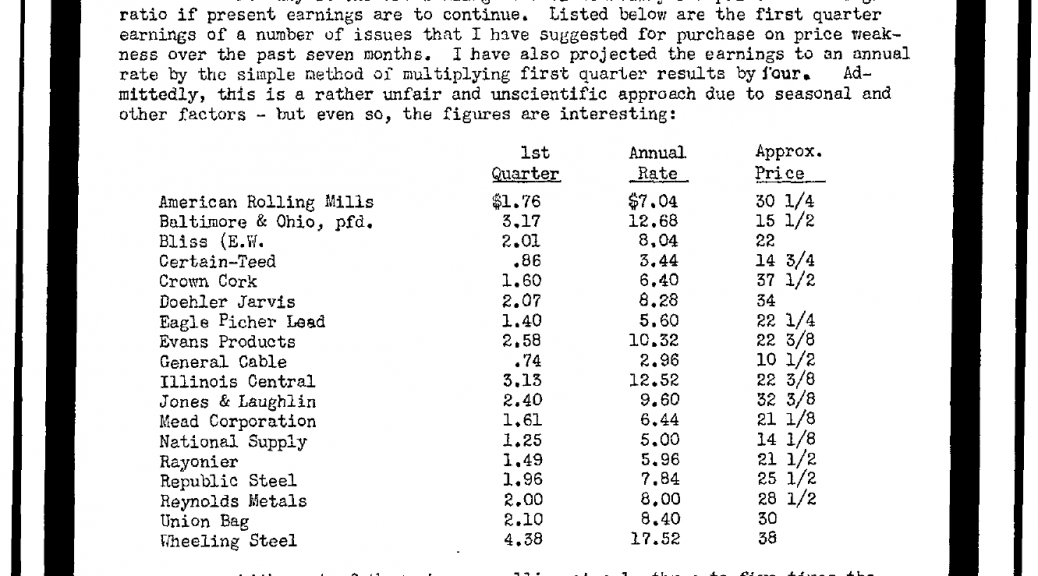 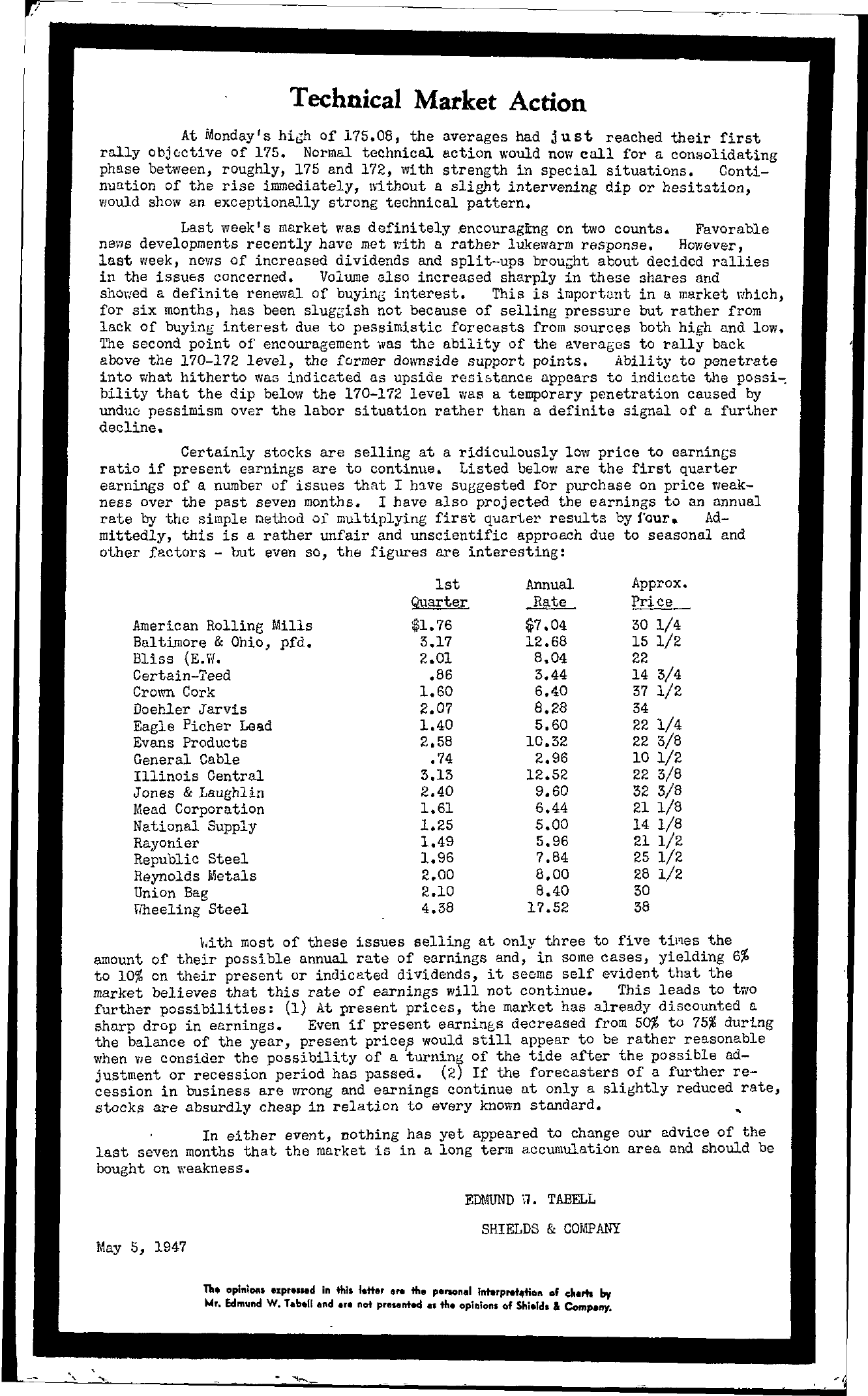 Technical Market Action At Monday's hiGh of 175.08, the averages had just reached their first rally objective of 175. Normal technical action would now call for a consolidating phase between, roughly, 175 and 172, with strength in special situations. Continuation of the rise immediately, without a slight intervening dip or hesitation, would show an exceptionally strong technical pattern. Last week I s market was definitely ,encouragi;ng on two counts. Favorable neVis developments recently have met vIith a rather lukewarm response. However, last Vleek, nevIs of increased dividends and splito-ups brou;ht about decided rallies in the issues concerned. Volume also increased sharply in these shares and showed a definite renewal of buying interest. This is importo.nt in a market which, for six months, has been sluggish not because of selling pressure but rather from lack of buying interest due to pessimistic forecasts from sources both high and low. The second point of encouragement was the ability of the averages to rally back above the 170-172 level, the former downside support paints. Ability to penetrate into what hitherto was indicated as upside resi;tance appears to indicate the possi- bi1ity that the dip below the 170-172 level was a temporary penetration caused by undue) pessimism over the labor situation rather than a definite signal of a further decline. Certainly stocks are selling at a ridiculously low price to earninGS ratio if present earnings are to continue. Listed below are the first quarter earnings of a number of issues thllt I hlve suggested for purchase on price weakness over the past seven months. I have also projected the earnings to an annual rate by the simple r.lethod 01 multiplying first quarter results by four. Admittedly, this is a rather unfair and unscientific approach due to seasonal and other factors – but even so, the figures are interesting American Rolline; Mills Baltimore &Ohio, pfd. Bliss (E.W. Certain-Teed Crown Cork Doehler Jarvis Eagle Picher Lead Evans Products General Cable Illinois Central Jones &Laughlin Mead Corporation National Supply Rayonier Republic Steel Reynolds Metals Union Bag rlbeeling Steel 1st Quarter 1.76 3.17 2.01 .86 1.60 2.07 1.40 2.58 .74 3.13 2.40 1.61 1.25 1.49 1.96 2.00 2.10 4.38 Annual Rate 7.04 12.68 8.04 3.44 6.40 8.28 5.60 lC.32 2.96 12.52 9.60 6.44 5.00 5.96 7.84 8.00 8.40 17.52 Approx. Price 30 1/4 15 1/2 22 14 3/4 37 1/2 54 22 1/4 22 5/8 101/2 22 3/8 32 3/8 21 1/8 14 1/8 211/2 25 1/2 28 1/2 30 38 \,ith most of these issues selling at only three to five til'les the amount of their possible annual rate of earnings and, in some cases, yielding 6 to 10 on their present or indicated dividends, it seems self evident that the market believes that this rate of earnings will not continue. This leads to two further possibilities (1) At present prices, the market has already discounted a sharp drop in earnings. Even if present earnin5s decreased from 50 to 75 during the balance of the year, present pricer would still appear to be rather reasonable when we consider the possibility of a turning of the tide after the possible ad- justment or recession period has passed. (2) If the forecasters of a further re- cession in business are wrong and earnings continue at only a slightly reduced rate, stocks are absurdly cheap in relation to every known standard. , In either event, nothing has yet appeared to change our advice of the last seven months that the market is in a long term accumulation area and should be bought on weakness. May 5, 1947 EDMUND i1. TABELL SHIELDS & COMPANY n.. opinions ezpressed in thil .tter ere the p.rwnal intarprettioft of cha…. by …,. Edmund W. T.,.II and .r. not presented al the opinions of Shi.ld Comp.,.